Former soviet bloc country Georgia has a unique heritage which is now being used to enrich its modern appeal. Georgian wine is known for its excellence the world over, and it is believed that viniculture originated in what is now Georgia in pre-Roman times. Tsinandali is a fine wine producing estate which dates back to the 7th century. 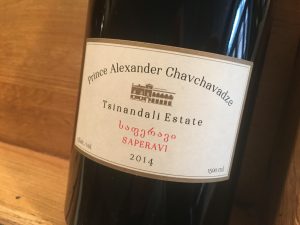 The Tsinandali Estate is located in the heartland of the wine producing region of Kakheti, and was among domains of the aristocratic Chavchavadze family for centuries, but the true revival of the Estate is linked with the name of Prince Alexander Chavchavadze (1786-1846) son of diplomat and statesman Prince Garsevan, who turned this picturesque Estate into the centre of cultural life of Georgia.The Prince’s family is famous for fostering European culture and was first to produce European style wine and first to encourage European classical music; The first ever grand piano in Georgia is still on display in Tsinandali.

It fell into disrepair during the Soviet era, but now has a commercial and cultural revival thanks to the vision of George Ramishvili, founder and chairman of the Silk Road Group, who has developed the estate as a luxury hotel and tourist destination.

Together with another founder, Yerkin Tatishev, chairman and founder of Kusto Group, the two businessmen created the Tsinandali Festival, in the belief that music carries the power to unite all human beings, and the Tsinandali Festival Academy enabling a number of exceptional young musicians from all over the world to participate in its inaugural year.

“Tsinandali has existed for over a thousand years” said Yerkin Tatishev, “ and we were inspired to create something unique, we want to create a chemistry between peoples based on music, based on culture, based on friendship.
You never know how things will work out but we believe we will create something really strong and valuable, which will grow year by year.
We want to create value between people, not in terms of money but in people’s hearts.”

“Like all Georgians, I take great pride in the resurrection of the Tsinandali Estate and the founding of the Tsinandali Festival which will continue to build on our country’s history as a custodian of our shared ancient heritage” said George Ramishvili. 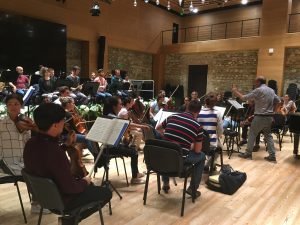 “Georgia has for millennia hosted travellers along the Silk Road with our food and drink having been justly celebrated, not least for the invention of wine and viticulture 8,000 years ago. Since the Tsinandali Estate’s founding in the 1690’s it has played host to luminaries such as Dumas and Pushkin and as a home for technological innovations from Europe: bringing Georgia’s first printing press, grand piano, English landscape garden and French bottling and barrelling techniques. That tradition lives on with the Tsinandali Festival.”

An ambitious week long festival programme opened with a performance in the presence of Georgia’s President Salome Zourabichvili of Mahler’s 5th symphony by the festival’s Pan-Caucasian Youth Orchestra, which brought the house down! 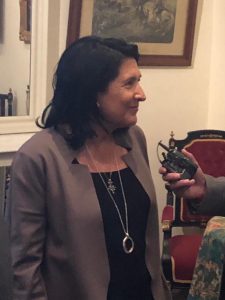 President Zourabichvili told EU Reporter “ This festival is very important, it will put Georgia on the map of the european musical world, and that’s exactly what we want.

We want Georgia to be known not only for its conflicts or for problems but to be known by what it has really deeply entrenched, which is its culture and its musical culture.

We produce many fine voices and many fine musicians that are well known throughout Europe, but to something that is also existing in the country. We do not just send our talents abroad, its something that Georgian society has been raised with and continues to be essential to its own existence”

Georgia expert Daniel Kanin said “The festival is the culmination of a vision to establish Tsinandali and Georgia as a cultural hub. Tonight has seen some of the world’s most talented young musicians play in the stunning, historic surroundings of this beautiful estate.”

The opening night’s performance was outstanding, with general acclaim by all who experienced the evening’s event.

Speaking after the performance, festival director David Sakvareldze Told EU Reporter “ When we first visited the old winery in 2007 we sang there and heard the wonderful acoustic. We realised we had something special and so the festival dream was born. To live together and to love each other through wonderful music.”

The Tsinandali Festival is well placed to become a regular highlight of the international music calendar, and a wonderful shop window for Georgia as a premier cultural destination.