This week, an Emergency Medical Team of 10 doctors and nurses from Italy are preparing their mission to Armenia, via the EU Civil Protection Mechanism. They will provide further assistance in addition to last week's deployed medical experts from Lithuania. In addition, in response to requests for assistance under the Mechanism, Poland has offered disinfectant, surgical masks, face shields and other personal protective equipment items to Moldova, Ukraine and Belarus.

This support comes on top of protective equipment and other items sent by Slovakia to Ukraine and by Estonia to Georgia in May 2020. The EU coordinates and co-finances both the transport of the medical experts to Armenia, as well as the delivery of the in-kind assistance to Ukraine, Moldova and Belarus.

Furthermore, the EU is also co-ordinating the offer of protective facemasks and other essential equipment from Denmark to Georgia. Crisis Management Commissioner Janez Lenarčič said: “I am grateful to Italy, Poland and Denmark for their generosity towards our neighbours. The virus knows no borders, but neither does European solidarity”.

The EU Civil Protection Mechanism has already co-ordinated the delivery of assistance to 17 countries during this pandemic.

Related Topics:ArmeniaBelaruscoronaviruseufeaturedfull-imageGeorgiaMoldovaUkraine
Advertisement
Up Next 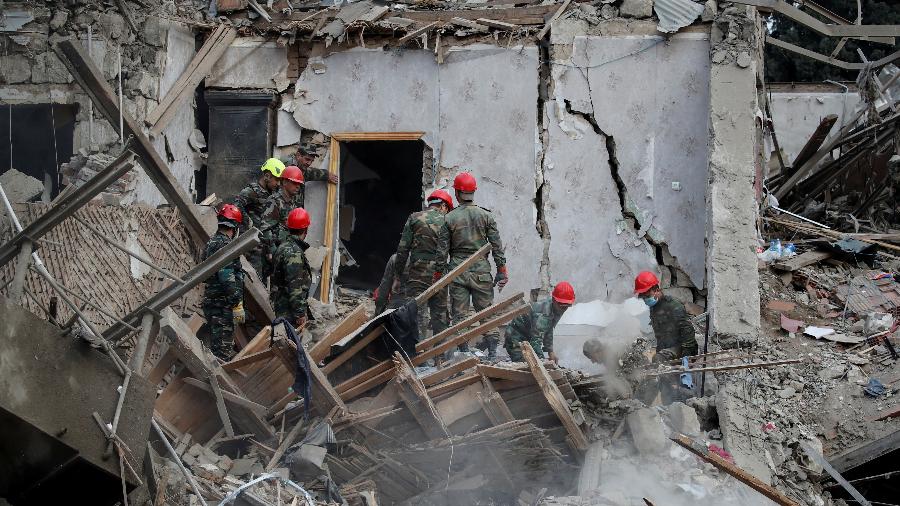 Azerbaijani authorities have reported an attack on a residential area in Ganja, the country's second largest city, with at least nine dead and 34 injured, on Sunday, October 11. President Ilham Aliev has denounced this violation of the ceasefire only just agreed by both sides.

Azerbaijan accused Armenia of not respecting the truce agreement that entered into force the day before, and of continuing the bombing of civilian areas. In the afternoon, no exchange of prisoners or bodies had been announced, a stated objective of the humanitarian ceasefire negotiated in Moscow, which was due to come into force on Saturday at 12 p.m. local time.

In Ganja, journalists saw Azerbaijani rescuers at work in the rubble of a building, from which two bodies were removed. A total of nine apartments were destroyed, according to witnesses, by a strike at 2 a.m. (local time).

Azerbaijani President Ilham Aliev denounced the attack on Twitter as a "flagrant violation of the ceasefire" and a "war crime".

"The Armenian armed forces do not respect the humanitarian truce and continue to fire rockets and artillery on the towns and villages of Azerbaijan".

Araïk Haroutiounian, the self-proclaimed “president” in the occupied territories of Azerbaijan, said Sunday morning that his troops respected "the ceasefire agreement" and considered the situation "calmer" than the day before.

"As long as the shooting continues, there will be no exchange" of prisoners or bodies, warned the separatist leader in the morning.

The humanitarian truce was negotiated by the Armenian and Azerbaijani foreign ministers, under the aegis of Russia.

The Russian and Turkish foreign ministers called, in a Russian statement given after their telephone conversation, for "the need to strictly respect all the provisions" of the agreement.

The European Union (EU) has expressed “extreme concern” over violations of the truce in Nagorno-Karabakh.

"We take note with extreme concern of reports of continued military activities, especially against civilian targets, and civilian casualties," EU foreign minister Joseph Borrell said in a statement on Sunday.

An Azerbaijani spokesman said, “Indifference to the tragedy in Azerbaijan today could lead Europe to greater instability and tragedies in the future”.

He named the current stance of the EU ineffective, stating that the silence over human tragedy in Ganja and making veiled general statements will only encourage Armenia to continue its war crimes.

President of the EU Council Charles Michel responded to the situation in a tweet, saying:

“The humanitarian ceasefire between Armenia and Azerbaijan is an essential step towards de-escalation. I call on parties to observe ceasefire and to avoid further violence and putting civilians at risk. Negotiations without preconditions must resume without delay #NagornoKarabakh”. 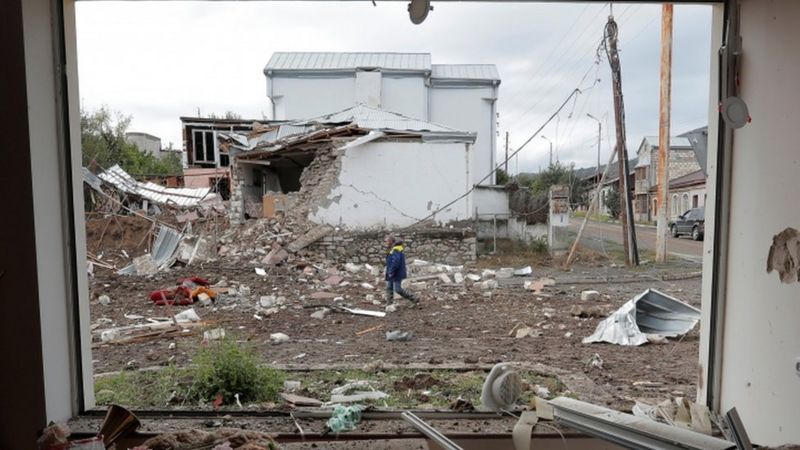 Armenia and Azerbaijan have agreed a temporary ceasefire in the conflict in the disputed Nagorno-Karabakh region.

More than 300 people have died and thousands displaced since the latest violence in the long-running conflict broke out on 27 September.

The hostilities will be halted from midday local time (08:00 GMT) on Saturday, to allow an exchange of prisoners and the recovery of dead bodies.

Nagorno-Karabakh is run by ethnic Armenians although it is officially part of Azerbaijan.

The two former Soviet republics have blamed each other for the latest outbreak of violence - the worst in decades.

Russia has a military base in Armenia and both are members of the Collective Security Treaty Organization (CSTO) alliance.

However, Moscow also has good relations with Azerbaijan.

On Friday (9 October) the Armenian defence ministry said fighting continued through the day, despite the talks being held in Moscow.

On Thursday, Armenia accused Azerbaijan of deliberately shelling a historic cathedral in Nagorno-Karabakh. Pictures showed serious damage at the Holy Saviour Cathedral in Shusha city (known as Shushi in Armenian).

At the same time, Azerbaijan said that its second-largest city, Ganja, and the region of Goranboy had been shelled by Armenian forces, with at least one civilian killed.

Speaking to the BBC earlier this week, Armenian Prime Minister Nikol Pashinyan warned of a "genocide" in the region, and said it was "Armenia, land of Armenians".

The clashes have displaced half of Nagorno-Karabakh's population - about 70,000 people - officials said.

The region's main city, Stepanakert, has suffered several days of shelling with residents sheltering in basements and much of the city left without power.

Armenia and Azerbaijan went to war over Nagorno-Karabakh in 1988-94, eventually declaring a ceasefire. However, they never reached a settlement in the dispute. 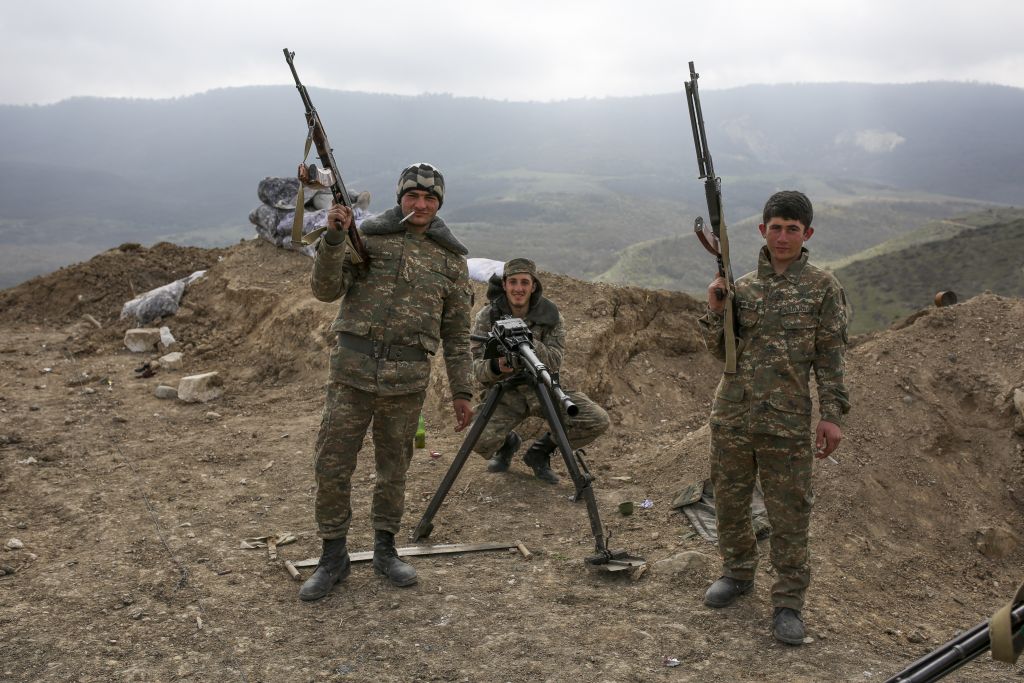 The EU is facing challenges on several fronts. Not only is the COVID-19 pandemic’s second wave crashing down on Europe, and the continent’s economy still struggling to recover from its first impact in spring, but the EU faces several foreign policy challenges at the same time. Brexit, the situation in Belarus, the poisoning of Alexei Navalny, and the continuing immigration crisis – these are all keeping EU leaders busy. Now they have to deal with a new foreign policy headache on Europe’s eastern borders that is entirely avoidable and unnecessary: the flare-up of hostilities over Nagorno-Karabakh.

Earlier this week, the EU's High Representative Josep Borrell joined with MEPs in a debate in the European Parliament in urging a ceasefire and an immediate end to the bloodshed.

Nagorno-Karabakh is an enclave in the Caucasus that is internationally recognised as part of Azerbaijan. Yet Armenia has occupied this region and seven adjoining districts of Azerbaijan, since the two countries fought a war in the early 1990s during the break-up of the Soviet Union. Armenia has refused to hand back control of Azerbaijan’s territory, despite four United Nations’ resolutions calling for it to withdraw its forces.

This uneasy situation has remained in place for the past three decades, with brief border flare-ups, such as in 2014 and 2016. However, nothing like what we are seeing today: the fighting in the past week has involved heavy artillery, drones and warplanes. Already 27 civilians have been killed in Azerbaijan and 141 injured. Armenia has reported 220 soldiers and at least 21 civilians have died.

Armenia is accused of using the opportunity of a West distracted by COVID-19 to alter the situation on the ground and capture more Azerbaijani territory. As a member of the Collective Security Treaty Organization (CSTO), a military alliance of ex-Soviet states, Armenia is assured of Russian help if it faces external aggression within its borders. However, under international law no such intervention would be justified in Nagorno-Karabakh and its seven surrounding districts, which are internationally recognised Azerbaijani territories under Armenian occupation for 30 years. Nevertheless, this conflict has been advantageous for Armenia so far, which faced little downside despite its smaller size, economy, population, and military power in comparison to Azerbaijan.

However, this is a big loss for Europe. Not only is there a violent conflict at the southern edges of Europe, but it jeapardises the key pipeline that passes through Azerbaijan and supplies gas to Europe.Azerbaijan has also been a strong partner of the West, with a strong secular polity.

Azerbaijan has responded with restraint to Armenian aggression, attacking only targets inside Nagorno-Karabakh. This is after all Azerbaijani territory. Azerbaijan has been careful this past week to not attack Armenian targets within Armenia itself, which Armenia would almost certainly have used as a pretext to demand Russian military assistance as per the collective defence terms of the CSTO.

Armenia has been trying to force this escalation, by attacking Azerbaijan’s second city Ganja, which is of little military value to Armenia as it lies over 100 km from Nagorno-Karabakh. It has also attacked the towns of Beylagan, Barda and Terter and there are reports that militants from the Kurdistan Workers Party and the group’s Syrian branch, the People’s Protection Units (YPG), who received training in Iraq and Turkey have been transferred to Nagorno-Karabakh to train Armenia forces.

But Azerbaijan’s president Ilham Aliyev has been careful to avoid escalating the conflict.

“Now the target of Armenia, which is bombing Azerbaijan, is involving Russia and the CSTO in this conflict. They want us to hit Armenia too and then they would apply to the CSTO for protection,” Aliyev said in an interview with Turkish TV channel TRT.

Russia, the United States and France have called for a ceasefire, though Russian president Vladimir Putin is the only leader who has the regional clout to end the present conflict. He can tell Armenia to back down if he wishes – Russia is, after all, Armenia’s most important ally. Russia also has good relations with Azerbaijan, which would make it a mediator acceptable to both sides.

President Aliyev gave a positive assessment of Russia's position on the current hostilities. “In this matter, Russia behaves like a very responsible and large country. Positive signals are coming from Russia and the issue of support for any side is not a subject for discussion,” he pointed out.

The EU needs to work with Russia to bring an immediate end to hostilities. Armenia should stop attacking Azerbaijan’s cities, and start negotiating its withdrawal from Nagorno-Karabakh. This simmering ‘frozen conflict’ will now have to be resolved, or else a wider regional war with Turkey, Iran and Russia cannot be ruled out.