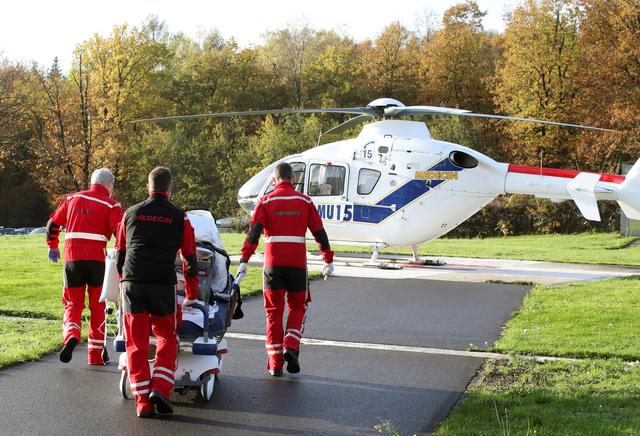 Belgium’s surging second wave of COVID-19 cases has forced it to move some severely ill patients, many on ventilators, to neighbouring Germany, and air ambulances began flying Belgian patients further into the country on Tuesday (3 November), write Philip Blenkinsop and Yves Herman.

The helicopter operator transports each COVID sufferer inside a giant transparent plastic bag connected to medical devices. Most of the transferred patients are intubated and on ventilators.

Belgium had among the highest death tolls per capita from the first coronavirus wave in March-April, and now has Europe’s highest per capita number of confirmed new infections, according to the European Centre for Disease Prevention and Control.

The country of 11 million people has 7,231 COVID patients in hospital, 1,302 of them in intensive care and local hotspots, such as the eastern city of Liege, have seen the capacity of intensive care beds being reached.

A trip such as to the German city of Muenster would take at least three hours by road, but can be done up to three times faster by air, and with fewer shocks to the patient such as from road bumps.

Martin Kotthaus, Germany’s ambassador to Belgium, said a mechanism had been set up to allow Belgian patients to transfer to hospitals in the German state North Rhine-Westphalia, where there is more spare capacity.

“In the first wave, Germany had more than 230 patients from Italy, France and the Netherlands. Now we are extending our help to Belgium,” he told Reuters. “But in the future, it might be Germans who would have to come to Belgium.”

Jihadist terrorism in the EU since 2015

UAE, the safe haven for criminals, terrorists and scammers

Solar powered crypto-mining – earn money and save the planet!

UAE, the safe haven for criminals, terrorists and scammers