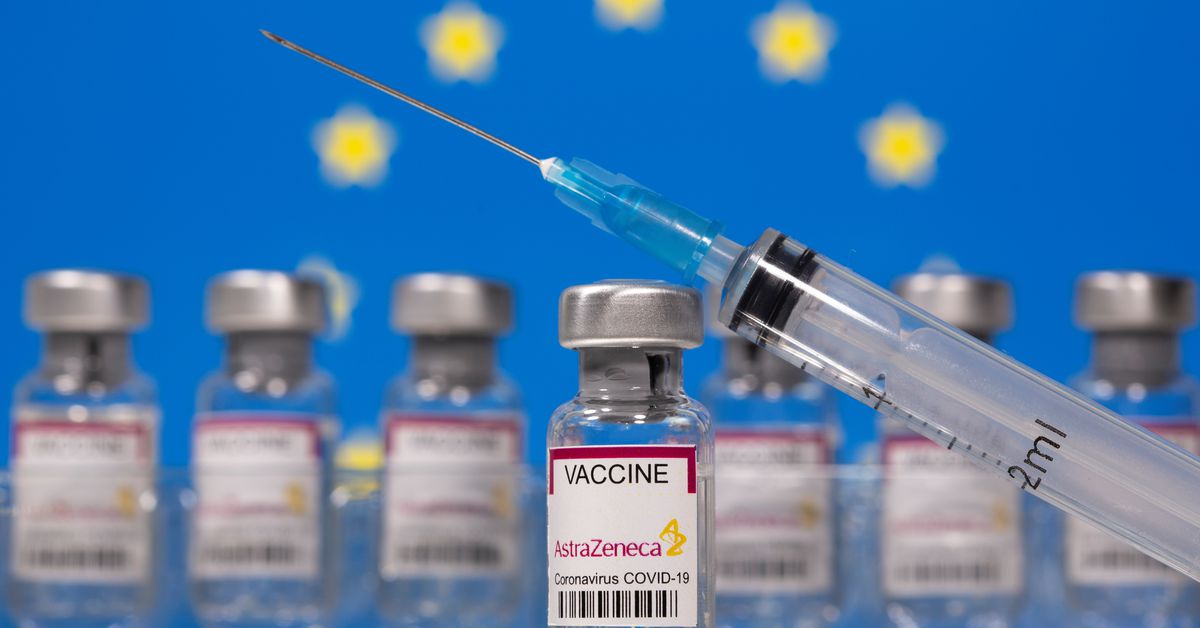 The news that the European Union isn’t planning to renew its COVID-19 vaccine contract with AstraZeneca comes as little surprise to anyone who has followed the mess of recriminations, lawsuits, delivery delays and back and forth over concerns about safety and efficiency which have plagued the rollout of the Anglo-Swedish firm’s vaccine, writes Louis Auge.

Just last week, Europe’s medicines regulator (EMA) said it was reviewing reports of a rare nerve condition in people who had received the vaccine; the UK’s medicines regulator has already promised an alternative vaccine to most adults under the age of 40 years old, while some EU member states, such as Denmark, have given up entirely on the AstraZeneca jab.

Seeking to avoid a repeat of its early-stage vaccine rollout struggles, the EU recently inked a massive deal with Pfizer to make clear that jettisoning AstraZeneca won’t damage the bloc’s ability to provide booster doses as necessary. According to the new agreement—the largest COVID-19 vaccine deal so far—the EU will secure up to 1.8 billion doses of the Pfizer-BioNTech jab between now and 2023.

"[The contract] will secure the doses necessary to give booster shots to increase our immunity against the virus. It will provide vaccines adapted to escape variants that no longer respond to the vaccines,” European Commission President Ursula von der Leyen said of the deal. “It should enable us to vaccinate, if necessary and safe, children and teenagers. And it will consolidate Europe's leadership in mRNA technologies.”

The costly deal—reports have suggested that the total agreement is worth €35 billion, with each individual dose costing as much as €4 higher than in previous agreements with Pfizer—underscores the pattern of wealthy nations dipping into their deep pockets to secure vaccines for their populations at any cost.

Pfizer’s mRNA vaccine is one of the most effective COVID-19 jabs currently on the market, but it is also one of the most expensive and logistically difficult to manage. Vaccines using mRNA technology are typically three to four times more expensive than the AstraZeneca shot, which is currently being manufactured on a not-for-profit basis, and initiallyneeded to be stored at low temperatures. For this reason, alternatives to the AstraZeneca vaccine have remained out of reach for many countries, especially developing nations—sparking concerns that a two-tiered society may emerge in the wake of the pandemic.

“If wealthy countries say they are only going to have 'gold standard' with the most expensive vaccines,” explained Dr. Peter Drobac at Oxford Saïd Business School, “and then say AstraZeneca is not good enough for us in the global north, but it is good enough for the global south, it could reduce uptake of the vaccine and hamper efforts to vaccinate the world.” It is encouraging, then, that several companies are already making progress on the much-needed second generation of Covid vaccines, developing a number of promising candidates which may overcome the cost and storage roadblocks which many developing countries are facing.

Massachusetts-based Akston Biosciences, for example, has embarked on a Phase I/II clinical trial of its vaccine candidate AKS-452 at one of the Netherlands’ largest hospitals. AKS-452 has already shown “robust protection” in primate trials, and has several major advantages: the vaccine retains its potency for at least four months at 25°C, is shelf-stable for shorter periods at 37°C, and can be produced rapidly with standard, low-cost manufacturing techniques. According to Akston Biosciences, a single 2,000 litre production line could produce more than one billion doses in a year.

Akston Biosciences is hoping to first get AKS-452 approved in the EU, but the vaccine candidate could quickly become a vital boost to vaccine rollouts in the developing world. Indeed, the fact that AKS-452 does not require refrigeration or special handling makes it an ideal solution for the over 1 billion people living in sub-Saharan Africa, where electricity can be unreliable or wholly unavailable.

Hopes are also rising after Pennsylvania-based Inovio released very encouraging results from a mid-stage clinical trial for its vaccine candidate, INO-4800, which is the only nucleic acid-based vaccine which is stable at room temperature and even higher temperatures. The firm now plans to file preliminary results with the Food and Drug Administration (FDA).

“Our Phase two results validate our initial Covid-19 Phase one results in a larger population, which show that INO-4800 continues to be generally safe, well-tolerated and immunogenic in all studied age groups,” Inovio’s Dr. Laurent M. Humeau announced this week.

As harrowing footage from India’s second wave brings home the reality of the devastation beyond the first world, the injustice of current vaccine distribution patterns can feel like a knife to the heart. While wealthy countries like those in the EU may have the funds to lock up billions of doses of Covid-19 vaccines, less than 10% of India’s population is currently inoculated against Covid-19— this despite the fact that domestically produced jabs have been exported in their millions beyond Indian shores.

With their substantially lower barriers to distribution, the coming second generation of vaccines may ultimately prove to be the real watershed moment in the global fight against COVID-19. After all, no country will truly be safe until transmission of the virus is brought down all over the world. 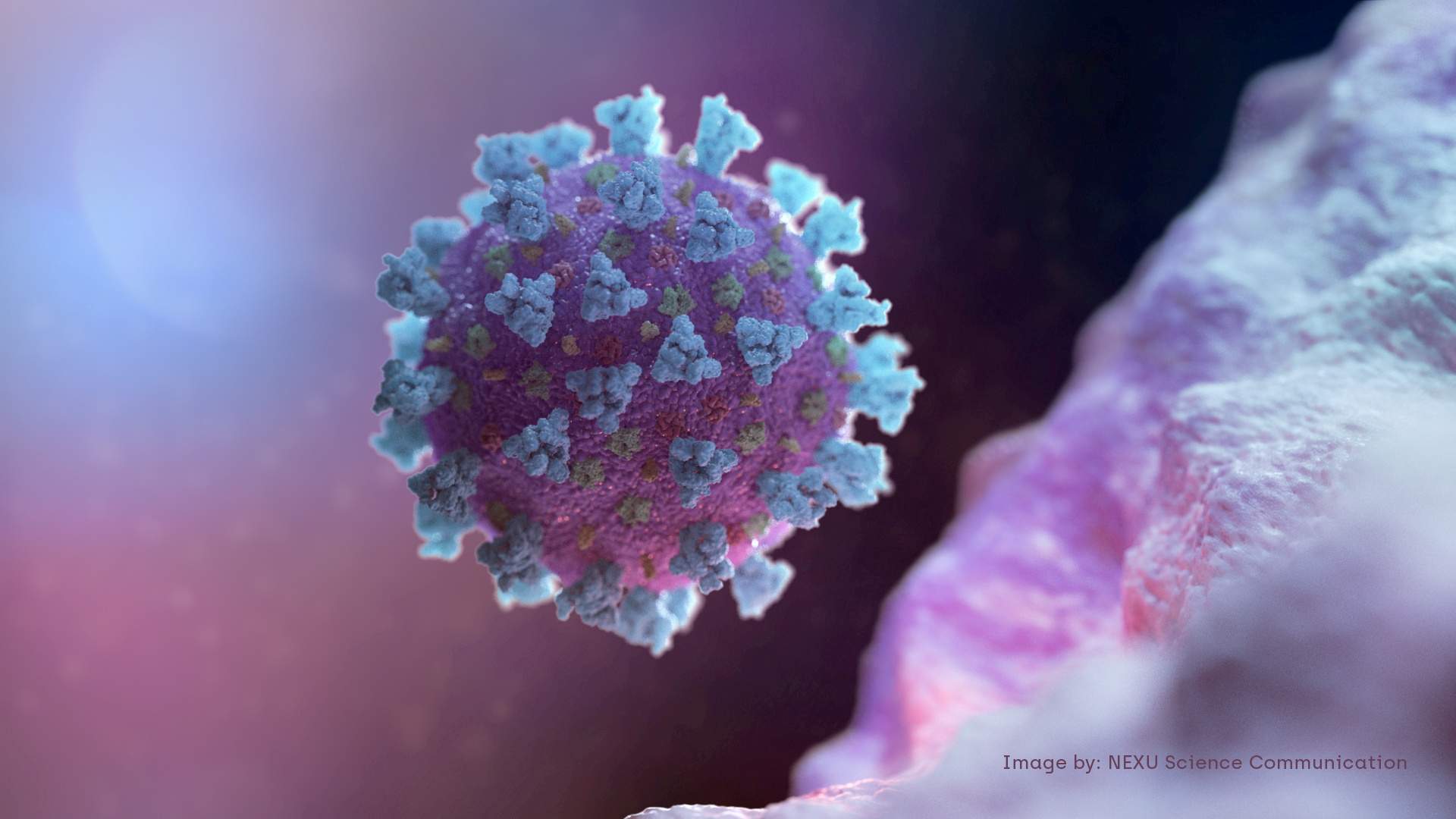 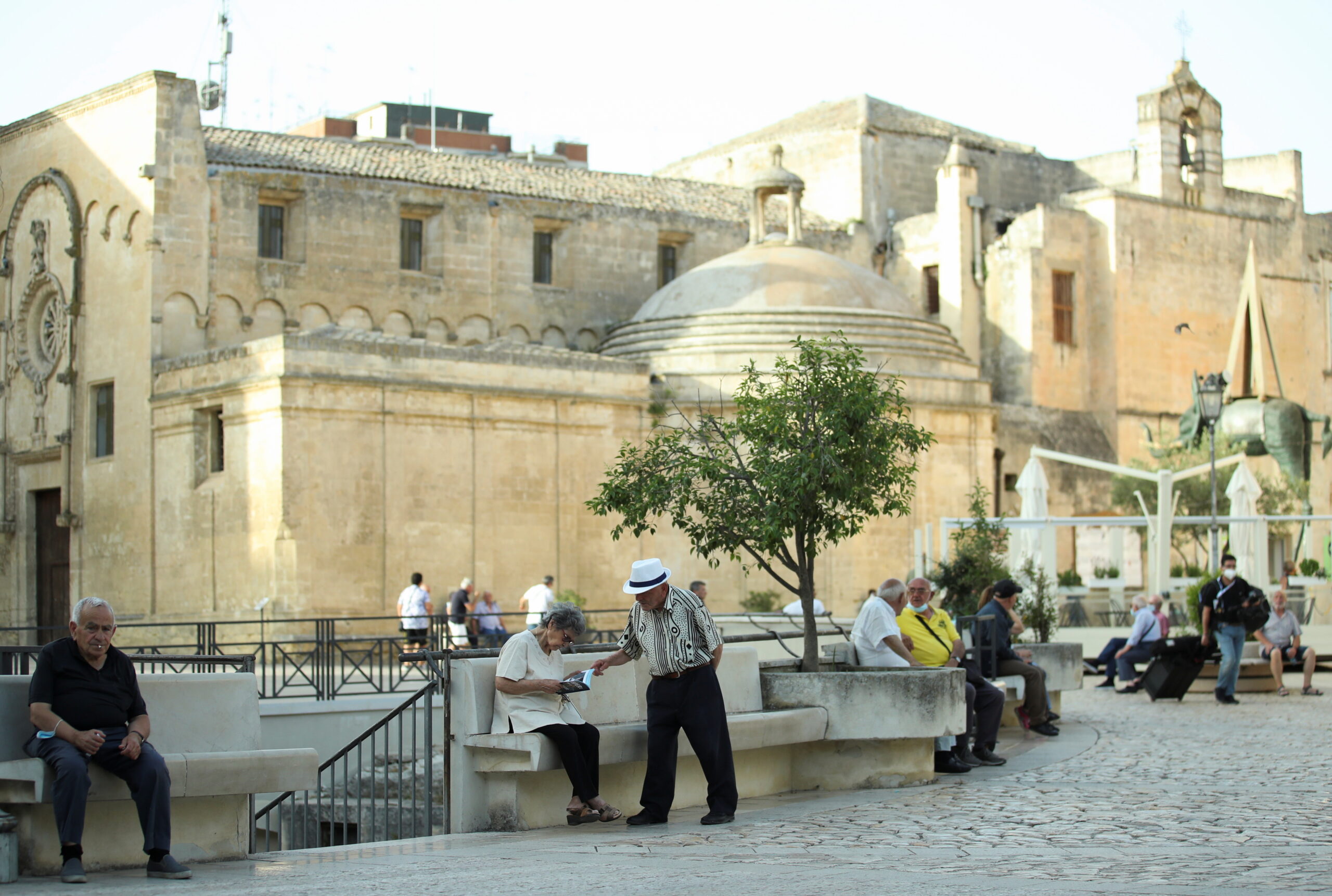 People rest without wearing masks as Italy lifts mandatory masks outdoors thanks to a decline in the coronavirus disease (COVID-19) cases and hospitalizations, in Matera, Italy, 28 June. REUTERS/Yara Nardi

The highly contagious Delta variant of the coronavirus has gained dominance in Italy, the National Health Institute (ISS) said on Friday (30 July), releasing data showing it accounted for 94.8% of cases as of 20 July, writes Emilio Parodi, Reuters.

The variant, first identified in India in December 2020, is now dominant worldwide and has led to a spike in infection rates that has stoked concerns over the global economic recovery.

In the previous survey based on data from 22 June, the Delta variant represented just 22.7% of cases. By contrast, the Alpha variant accounted for 3.2% of cases as of July 20 against a previous prevalence of 57.8%.

"It is essential to continue the systematic tracking of cases and to complete the vaccination cycle as quickly as possible", ISS President Silvio Brusaferro said in a statement.

The ISS said its survey did not include all variant cases but only those detected on the day it was carried out. It added that the Gamma variant, first identified in Brazil, fell to 1.4% of cases from 11.8% in the past survey.

The institute also pointed out an "extremely small increase" in cases of the Beta variant, first identified in South Africa, which it says is characterised by partial immune evasion.

Italy has registered 128,029 deaths linked to COVID-19 since its outbreak emerged in February last year, the second-highest toll in Europe after Britain and the eighth-highest in the world. It has reported 4.34 million cases to date.

Almost 59% of Italians over 12 years were fully vaccinated as of Friday, while about 10% are awaiting their second dose. 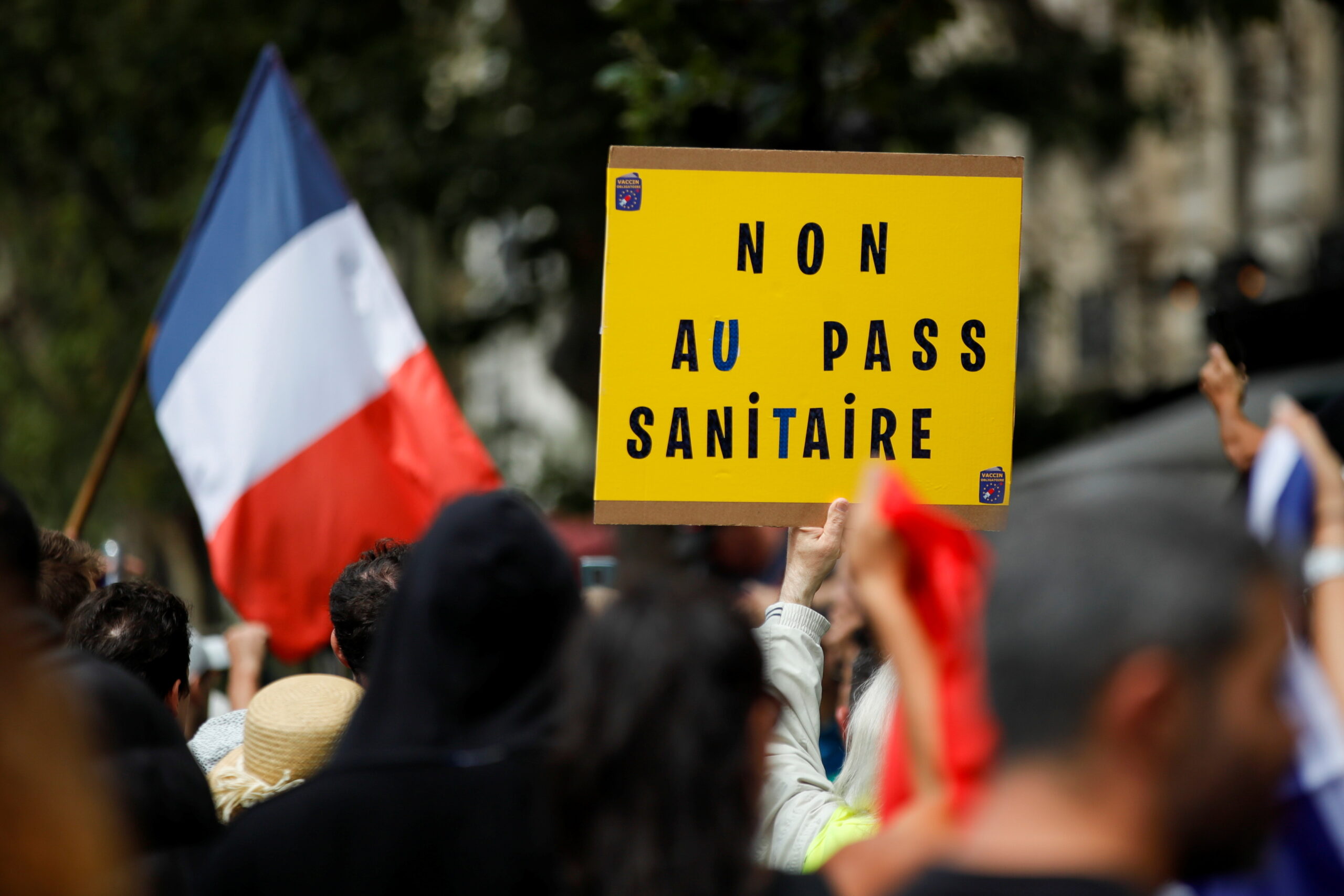 Thousands of people protested in Paris and other French cities on Saturday (31 July) against a mandatory coronavirus health pass for entry to a wide array of public venues, introduced by the government as it battles a fourth wave of infections, write Lea Guedj and Yiming Woo.

It was the third weekend in a row that people opposed to President Emmanuel Macron's new COVID-19 measures have taken to the streets, an unusual show of determination at a time of year when many people are focused on taking their summer break.

The number of demonstrators has grown steadily since the start of the protests, echoing the "yellow vest" movement, that started in late 2018 against fuel taxes and the cost of living.

An interior ministry official said 204,090 had demonstrated across France, including 14,250 in Paris alone. This is about 40,000 more than last week.

"We're creating a segregated society and I think it is unbelievable to be doing this in the country of human rights," said Anne, a teacher who was demonstrating in Paris. She declined to give her last name.

"So I took to the streets; I have never protested before in my life. I think our freedom is in danger."

Visitors going to museums, cinemas or swimming pools are already denied entry if they cannot produce the health pass showing they have been vaccinated against COVID-19 or have had a recent negative test.

Parliament approved a new law this week that will make vaccinations mandatory for health workers and extend the health pass requirement to bars, restaurants, trade shows, trains and hospitals.

About 3,000 police officers were deployed in the capital, with anti-riot officers striving to keep demonstrators on authorised routes.

Authorities sought to avoid a repeat of events last week, when scuffles between police and demonstrators broke out on the Champs-Elysees. Read more.

Protesters were also out in other cities like Marseille, Lyon, Montpelier, Nantes and Toulouse, shouting "Freedom!" and "No to the health pass!".