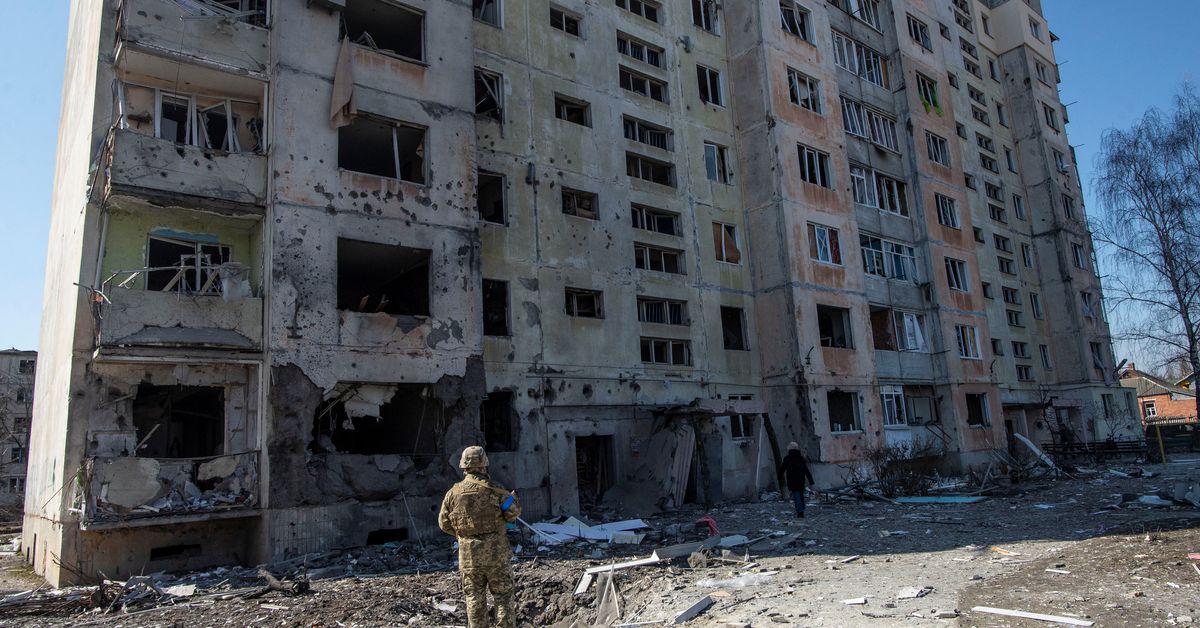 A Ukrainian service member stands in a front of a residential building damaged by a shelling, as Russia's attack on Ukraine continues, in the town of Okhtyrka, in the Sumy region, Ukraine 24 March, 2022.

Amnesty International apologised on Sunday (7 August) for "distress and anger" caused by a report accusing Ukraine of endangering civilians which infuriated President Volodymyr Zelenskiy and triggered the resignation of its Kyiv office head.

The rights group published the report on Thursday saying the presence of Ukrainian troops in residential areas heightened risks to civilians during Russia's invasion.

"Amnesty International deeply regrets the distress and anger that our press release on the Ukrainian military's fighting tactics has caused," it said in an email to Reuters.

"Amnesty International’s priority in this and in any conflict is ensuring that civilians are protected. Indeed, this was our sole objective when releasing this latest piece of research. While we fully stand by our findings, we regret the pain caused."

Zelenskiy accused the group of trying to shift responsibility from Russian aggression, while Amnesty's Ukraine head Oksana Pokalchuk quit saying the report was a propaganda gift for Moscow.

Ukrainian officials say they try to evacuate civilians from front-line areas. Russia, which denies targeting civilians, has not commented on the rights report.

In its email on Sunday, Amnesty said it had found Ukrainian forces next to civilian residences in 19 towns and villages it visited, exposing them to risk of incoming Russian fire.

"This does not mean that Amnesty International holds Ukrainian forces responsible for violations committed by Russian forces, nor that the Ukrainian military is not taking adequate precautions elsewhere in the country," it said.

"We must be very clear: Nothing we documented Ukrainian forces doing in any way justifies Russian violations."