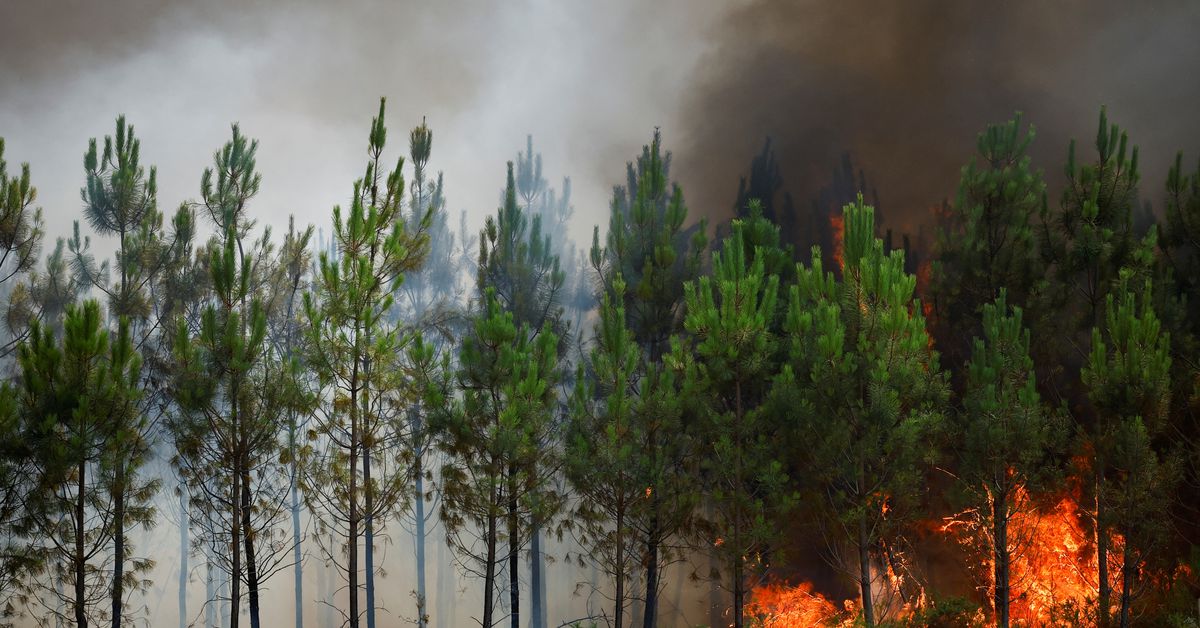 A view shows burning trees, as wildfires continue to spread in the Gironde region of south-western France, 11 August, 2022.

More than 1,000 firefighters, backed by water-bombing planes, battled for a third day a fire that has forced thousands from their homes and scorched thousands of hectares of forest in France's southwestern Gironde region.

With a dangerous cocktail of blistering temperatures, tinder-box conditions and wind fanning the flames, emergency services were struggling to bring the fire under control.

"It's an ogre, a monster," said Gregory Allione from the French firefighters body FNSPF said.

Heatwaves, floods and crumbling glaciers in recent weeks have heightened concerns over climate change and the increasing frequency and intensity of extreme weather across the globe.

The head of the European Space Agency, Josef Aschbacher, said rising land temperatures and shrinking rivers as measured from space left no doubt about the toll on agriculture and other industries from climate change.

"It's pretty bad. We have seen extremes that have not been observed before," Aschbacher said.

In Romania, where record temperatures and drought have drained rivers of water, Greenpeace activists protested on the parched banks of the Danube to draw attention to global warming and urge the government to lower emissions.

With successive heatwaves baking Europe this summer, searing temperatures and unprecedented droughts, renewed focus has been placed on climate change risks to farming, industry and livelihoods.

Severe drought is set to slash the European Union's maize harvest by 15%, dropping it to a 15-year a low, just as Europeans contend with higher food prices as a result of lower-than-normal grain exports from Russia and Ukraine.

Swiss army helicopters have been drafted in to airlift water to thirsty cows, pigs and goats sweltering under a fierce sun in the country's Alpine meadows.

In France, suffering its harshest drought on record, trucks are delivering water to dozens of villages where taps have run dry, nuclear power stations have received waivers to keep pumping hot discharge water into river, and farmers warn a fodder shortfall may lead to milk shortages.

In Germany, scant rainfall this summer has drained the water levels of the Rhine, the country's commercial artery, hampering shipping and pushing freight costs.

However, as Europe contends with another heatwave, one group of workers has little choice but to sweat it out: gig-economy food couriers who often fall between the cracks of labour regulations.

After the mayor of Palermo on the island of Sicily in July ordered horses carrying tourists be given at least 10 litres of water per day, bicycle courier Gaetano Russo filed a suit demanding similar treatment.

"Am I worth less than a horse," Russo was quoted as saying in a Nidil CDIL union statement.

In Portugal, more than 1,500 firefighters spent a sixth day fighting a wildfire in the central Covilha region that has burned 10,500 hectares (40 square miles), including parts of the Serra da Estrela national park.

In Spain, electrical storms triggered new wildfires and hundreds of people were evacuated from the path of one blaze in the province of Caceres.

Macron's office said extra fire-fighting aircraft were arriving from Greece and Sweden, while Germany, Austria, Romania and Poland were all deploying firefighters to help tackle wildfires in France.

Firefighters said they had managed to save the village of Belin-Beliet, which emptied after police told residents to evacuate as the flames approached. But the blaze reached the outskirts, leaving behind charred houses and ruined tractors.

"We've been lucky. Our houses were saved. But you see the catastrophe over there. Some houses could not be saved," said resident Gaetan, pointing to houses burnt to the ground.

The Gironde was hit by big wildfires in July.

Climate activists protest on the dry banks of the Danube - Reuters