According to the Iranian state-run media, Ali Younesi and Amir Hossein Moradi , two elite students at the pretigous Sharif University of Technology in Iran, have been detained by the authorities. The two had disappeared nearly a month ago with no information about their whereabouts. Maryam Rajavi, President-elect of the National Council of Resistance of Iran (NCRI) has called for their release and the dispatch of an international fact-finding mission.

Judiciary Spokesman Gholam-Hossein Esmaili acknowledged their arrest on May 5, claiming that the two had linked up with the main Iranian opposition group, the  People’s Mojahedin Organization of Iran (PMOI) also known as Mujahedin-e Khalq (MEK).

Reciting a series of trumped-up charges, he added that they had engaged in "diversionary actions" and were "attempting to carry out sabotage operations." "Explosive devices used in sabotage operations were discovered when their homes were searched," he said.

“Amid the Coronavirus, this was essentially a conspiracy by the enemies; they wanted to wreak havoc in the country, which was fortunately thwarted by the vigilance and timely action of intelligence ministry agents," Esmaili added. 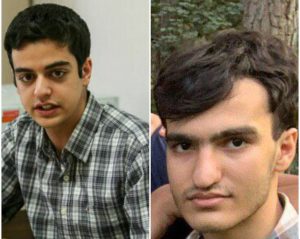 The two had been detained by Intelligence Ministry agents. Younesi was taken to his home after being arrested, where, his parents were also taken away and interrogated for hours under pressure.

Mr. Younesi won the gold medal of the 12th International Olympiad on Astronomy and Astrophysics, held in China in 2018. Earlier, he had won the silver and gold medals of the National Astronomy Olympiad in 2016 and 2017. Mr. Moradi had won the Olympiad’s silver medal in 2017.

Subsequent to the arrest of Messers Younesi and Moradi, students at Sharif University demanded to know about the status and fate of their friends. Their secret detention, widley discussed in social media in Iran, also created some controversy in the state-run media.

Increasingly concerned over public fury and rage over the calamitous economic conditions and the failure to effectively combat coronavirus, which has taken nearly 40,000 lives across the country, the regime has taken recourse to  intimidation, suppression to thwart the potential eruption of another nationwide uprising.

Meanwhile, the MEK announced the names of 18 others, among the many who have been arrested  throughout the country, as follows:

Mrs. Maryam Rajavi, the President-elect of the National Council of Resistance of Iran (NCRI), emphasized that the detainees were subjected to torture and face execution, and were also in danger of being exposed to Coronavirus.  She again urged the Secretary-General of the United Nations, the High Commissioner for Human Rights, and the Human Rights Council, as well as the international human rights organizations to take urgent action to secure the release the detainees and to send international missions to visit the regime's prisons and meet with these prisoners.