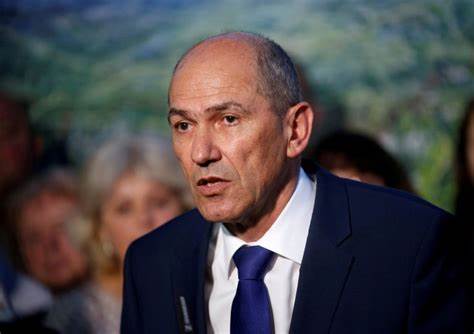 Jansa was addressing a Free Iran World Summit organized by the Iranian opposition movement, the National Council of Resistance of Iran.

Jansa told the conference that the “Iranian people deserve democracy, freedom and human rights and should be firmly supported by the international community.”

The Slovenian Prime Minister also referred to Amnesty International’s demands to investigate the new Iranian President-elect Ebrahim Raisi over his alleged involvement in the executions. “For nearly 33 years, the world had forgotten about the victims of the massacre. This should change,” Jansa said.

In a reaction, Borrell said that Jansa may hold the rotating EU Council presidency but he “does not represent” the EU in foreign policy. Jansa’s statements also sparked tensions with Iran.

Borrell said that Iranian Foreign Minister Mohammad Javad Zarif had called him  to ask “if the declarations of the Slovenian prime minister represent the official position of the European Union, given that there had been a certain confusion related to the fact that Slovenia is currently the country holding the rotating presidency of the Council.”

The EU foreign policy representative said he told Zarif that “in our institutional setting, the position of a Prime Minister — even if he’s from the country that holds the rotating Council presidency — does not represent the position of the European Union.”

He added that only the president of the European Council, Charles Michel, could represent the EU at the level of heads of state and government.

“Foreign policy remains a competency of EU member states and each member state can have the opinion that it sees fit for each issue of international politics. … For me it’s only up to say whether Jansa’s position represents the European Union. And certainly it does not,” Borrell said.

Borrell also said that the EU had “a balanced position” on Iran “that puts political pressure when it’s considered necessary, in many areas, and at the same time looks for cooperation when it is necessary.”

The EU is currently working as coordinator to revive the 2015 nuclear deal with Iran.

A spokesperson of the Slovenian representation to the EU, quoted by Politico.eu, said that “Slovenia has no intention whatsoever of getting involved in Iran’s internal affairs.’’ He added however that Slovenia “always advocates for human rights and fundamental freedoms. This is in line with our values and legislation.”

Slovenia is considered as a pro-Israel country within the European Union. The country made a sharp U-turn in recent years as one of the one former Soviet bloc country in the EU that consistently voted against Israel in the UN. Slovenia nearly recognized a Palestinian state in 2014, but in the end the parliament opted to just call on the government to do so.

Jansa’s party, in the opposition at the time, was the only one to oppose supporting a Palestinian state.

Slovenia took two a pro-Israel actions when it changed its annual vote from abstention to opposition on a UN General Assembly resolution extending the tenure of the Division for Palestinian Rights of the Secretariat.

Contrary to the EU which has banned only the so-called ‘’military wing’’ of Hezbollah, Slovenia declared the whole Lebanese organisation a “criminal and terrorist organization that represents a threat to peace and security.”

“We condemn the terrorist attacks and stand with Israel,” it said.

For the first time, the European Parliament states that Hezbollah is responsible for Lebanon’s devastating political and economic crisis

In a resolution on Lebanon adopted earlier this week, the European Parliament clearly stated that Hezbollah is responsible for the country’s devastating political and economic crisis and the repression of the 2019 popular movement, writes Yossi Lempkowicz.

The resolution, which was adopted with a overwhelming and cross-party support, stresses the need for full Lebanese sovereignty and laments detrimental outside interference.

The resolution further threatens “the introduction of targeted sanctions for obstructing or undermining the democratic political process.”

The resolution said that the European Union should still consider imposing sanctions on Lebanese politicians who block the progress of the new government.

Taking note of Lebanon’s formation of a government two weeks ago after more than a year of political deadlock, the European Parliament, meeting in Strasbourg, said EU governments cannot yet release pressure on the country.

Despite the fact that EU foreign policy chief Josep Borrell told the European Parliament that the time for sanctions had passed because of the formation of a government. The EU has welcomed the announcement of the new government led by Prime Minister Najib Mikati.

The European parliament “deeply urges Lebanese leaders to keep their promises and be a functional government”, the resolution said.

The EU agreed in June to prepare travel bans and asset freezes for Lebanese politicians accused of corruption and obstructing efforts to form a government, financial mismanagement and human rights abuses.

The European Conservatives and Reformists (ECR), a center-right political group in the EU parliament, strongly welcomed the adoption of the resolution. ‘’The ECR Group endorses the European Parliament’s view that Hezbollah is responsible for Lebanon’s devastating political and economic crisis and the repression of the 2019 popular movement.”

” For the first time, MEPs have recognised the organisation’s strong ideological allegiance with Iran which acts to destabilise Lebanon,’’ it noted.

For the group, Swedish MEP Charlie Weimers said the resolution ‘’greatly challenges the left-liberal groups to come to terms with Hezbollah’s true terrorist nature and to do away with the made-up distinction between the so-called military and political wings of the organisation.’’

‘’It is a distinction that is strongly denied by Hezbollah’s deputy leader, Naim Qassem, himself who stresses that Hezbollah has one single leadership and that no distinction between wings exists,’’ Weimers added.

“This must be the European Parliament’s strongest condemnation yet of Iran and their terror proxy Hezbollah for undermining the stability of Lebanon,” said Daniel Schwammenthal, Director of the AJC Transatlantic Institute.

“European lawmakers have thus sent a clear warning to the regime in Tehran and their Shiite terror group that it is no longer business as usual. The Lebanese people deserve freedom, democracy and prosperity–neither of which will be attainable as long as Hezbollah and Iran can continue to drag the country into corruption, crime and war,” he added.