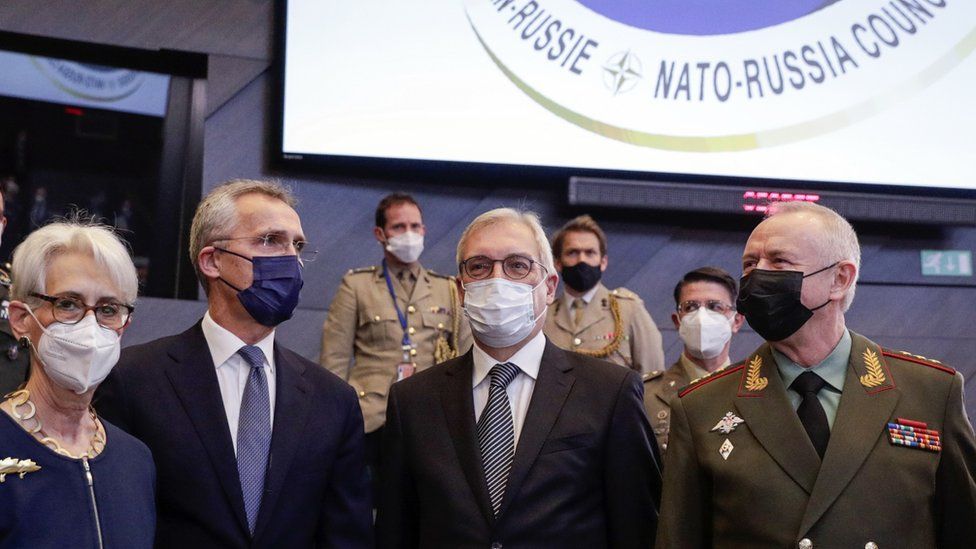 US Deputy Secretary of State Wendy Sherman has warned Russia that it must choose either diplomacy or confrontation with the West, Ukraine conflict.

She was speaking after talks between NATO and Russia, one of three diplomatic events this week aimed at reducing tension over Ukraine.

Some 100,000 Russian troops have reportedly amassed near the Ukrainian border, prompting fears of an invasion.

Sherman reiterated that the US and other NATO members would never agree to veto Ukrainian admission, pointing out that the military alliance had an open-door policy. The goal of joining NATO is part of Ukraine's constitution.

But she said there were areas where progress could be made, and that Russia must decide what it wanted to happen next.

"Russia, most of all, will have to decide whether they really are about security, in which case they should engage, or whether this was all a pretext. And they may not even know yet."

She said that the US and NATO were preparing for every eventuality.

Wendy Sherman forcefully declared the meeting a "remarkable expression of the power of diplomacy".

There was "complete unity" amongst Nato members in support of core principles that Russia is challenging, she said.

The state department has left no one in doubt about US efforts to cement a strong common position.

Officials regularly read out a list of high-level contacts. More than 100 engagements since November was the "preliminary tally", according to spokesperson Ned Price.

Alongside that has been the relentless mantra, "Nothing about you, without you", meant to reassure the Europeans and Ukrainians that the US would not strike a separate deal in bilateral talks with Moscow.

Sherman brought considerable experience to that encounter on Monday. She knows her counterpart Sergei Ryabkov very well, having worked together before on issues related to Syrian and Iranian arms control.

While there was no agreement from the eight-hour meeting, Mr Ryabkov acknowledged the Americans had studied the Russian proposals deeply.

The US-European unity will be tested if Moscow rejects the offer of security talks with Nato hammered out this week. But the assessment of some in Washington is that so far US diplomacy on this has been effective.

Russia has issued a series of demands which aim to prevent Nato from expanding any further east and also to reduce the alliance's presence near Russia's borders.

Nato has flatly rejected those demands but says it is willing to talk about other issues including arms control and limits to military exercises.

Nato, or the North Atlantic Treaty Organisation, is a defence alliance made up of 30 countries, first established in 1949.

Speaking for Russia after Wednesday's talks in Brussels, Mr Grushko warned that a further deterioration in ties could lead to unpredictable consequences for European security.

His warning echoed the words of Nato Secretary General Jens Stoltenberg, who said that there was a "real risk for new armed conflict in Europe".

Russia's troop build-up near its border with Ukraine has sparked fears that it is preparing for an invasion. In 2014 Russia seized, then annexed, Ukraine's Crimean peninsula, after Ukrainians overthrew their pro-Russian president.

Later that year, Russian-backed separatists captured large parts of the east of Ukraine.

Russia insists that the latest build-up of troops is nothing to fear. But Russian President Vladimir Putin has talked of "military-technical measures" if the West's "aggressive" approach continues.

Talks took place at the Organisation for Security and Co-operation in Europe in Vienna on 13 January, the first time this week Ukraine will have a seat at the table.