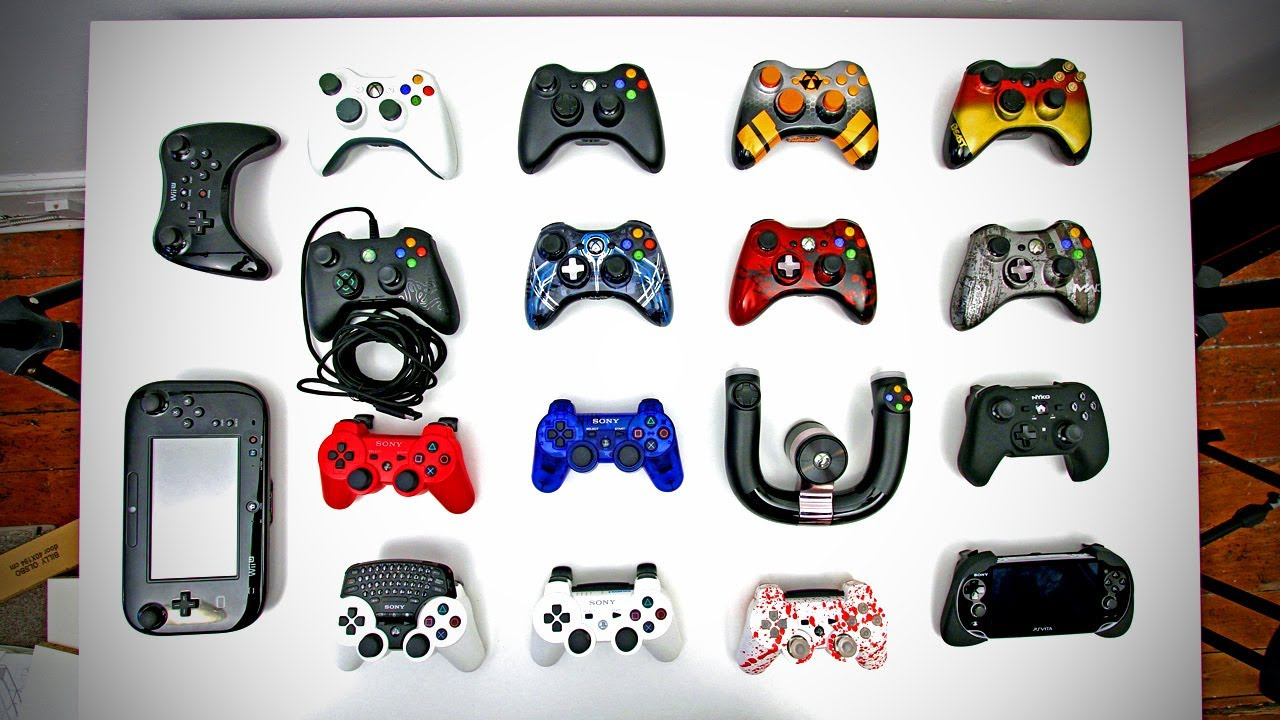 The popularity of video games is at an all-time high nowadays. And is somewhat understandable as millions of people are playing some type of video game. Among this type of video games we find the console too. And what is the most important piece of a console? You are right, the controller. Our controllers are fairly complicated, their intricacies can be a challenge for those who want to learn them. They also have an interesting positioning of their buttons too, which users have to learn “blindfolded” if they want to be a good gamer. But first video game controllers prototypes weren’t so complicated back in the day. Most of them are classified in a rudimental design.

We can’t talk about the history of video game controllers without talking about the actual video games. All video game controllers are tracing their origin from one particular game, named Spacewar: The Origin. This game is arguably one of the first video games to emerge. The game itself is pretty much straightforward, gamers have the sole mission to destroy all the starships in front of them. Think of it as the predecessor of a more modern game, Flappy Bird, but instead of an actual bird you are controlling a spacecraft and you can fire missiles. Of course the goal remains the same, do not let anything touch you.

The game was designed and installed on a PDP-1 computer, which used eight Test Word switches. The maneuvering of the ship was done using four of those eight switches. Two of them were used to control the direction of the spaceship (left and right) and the other two were dedicated for the missile firing.

The Grandfather of Joysticks: Atari (1977)

The apparition of joystick has revolutionized the games we know today. The joystick has a very simple design to understand. Basically it only needs four switches that control the direction to function properly. The mechanism behind it is simple too. When you move the stick in a direction, a metal disc will do a connection with the circuit board through an electric signal which then indicates the direction to the Joystick. Future joysticks will also feature an additional switch used for firing the projectiles.

Although the design of the original joystick is shrouded in simplicity, most of the modern controllers have another ancestor. The success of button-based games such as Spacewar gave birth to another trend in the 60s. It is the time when a game called Pong gained a lot of popularity. This arcade game popularized by Atari was a tennis based one, in which two paddles bounce a dot from one to another until the dot can’t be returned anymore.

Controlling the paddles from Pong was done by using potentiometers, which were knobs that moved the paddles up and down when they were turned. The popularity of this game was so high, that many of the first Atari home consoles featured a de facto paddle controller. Pong served as one of the first competitive games too, as the paddle controller had two potentiometers  (one each side of the controller board), meaning that the game could be played in two. The patent for Atari joystick was received in 1978. But at that time, there were many joysticks on the market. Although the fierce competition, Atari joystick managed to differentiate itself from the rest because of its unique five direction connections (up, down, left, right and fire).

The apparition of the first video game console came with Atari, when they decided to offer a joystick along with the de facto paddle controller (Pong) with its Atari 2600 Video Computer System (VCS).

The controller designed by Nintendo was the final piece between classic and modern video games controllers. This controller stood the test of time as its design is mostly the same even nowadays. The controller had in the center two buttons (Start and Select), on the right there were the A and B buttons and on the left was the directional pad.

The new innovation was that players could now move onto the diagonal too, by pressing two adjacent buttons at the same time. Nintendo controllers have inspired the future video game creators to adjust and improve even more the consoles.

All nowadays controllers have the directional pad and the joystick combined into one single controller. Although each controller has its unique button placement, most of the modern controllers are descendants from the Sony PlayStation DualShock Controller which features two joysticks, several buttons and a directional pad.

The journey of video games controllers has been a fascinating one, starting from the simplicity of Spacewar until nowadays controllers which have all the features a gamer needs. Everytime you play a game with a controller, like Fifa 21 and Witcher 3 to blackjack online, you now know a part of the video game controller's history. And who knows what the future has in store for these controllers.

#UNIC - Survival of cinemas at stake

#UNIC - Survival of cinemas at stake

The International Union of Cinemas (UNIC), the body representing cinema trade associations and operators across 38 European territories, has issued the following statement:

"As European cinema operators finally emerge from a period of extended closure due to the COVID-19 outbreak and work hard to welcome audiences back, the focus of the entire industry must be on ensuring that recovery can happen and that audiences return to enjoy the unique experience of watching films on the big screen.

"While many on the distribution side have indicated that ‘we are all in this together’, recent events make it clearer than ever that this sentiment must be backed by actions as well as words.

"Specifically, new content must be released in cinemas first and observe a significant theatrical window, both elements being essential for the survival and health of every part of the European (and indeed global) cinema industry.

"A ‘cinema first’ strategy for film releases – accompanied by a significant period of theatrical exclusivity – is a proven business model, and crucial for ensuring that audiences can enjoy a diverse range of films. This system was the foundation for a record-breaking 2019, with 1.34 billion admissions and €8.7 billion earned at the box office in Europe alone.

"The entire sector faces unprecedented challenges. More than ever, decisions across the industry need to be made with a long-term perspective. If our studio partners oblige cinemas to wait until the sector emerges from the crisis in the US before supplying new content, it will prove too late for many European cinemas and their dedicated workforce.

"All who depend on the success of the film industry should commit to ensuring the future health of the whole sector. By doing so, they will ensure that the wider film industry and European cinemas – from one-screen independents to art-houses and multiplexes – will recover and return from this crisis stronger and more resilient than ever."

#Cineworld plans to reopen all theatres by early July

British cinema operator Cineworld Group Plc (CINE.L) said on Tuesday (16 June) that some of its theatres would reopen in the last week of June and expected all of them to reopen by July with enhanced sanitation procedures across all sites, writes Tanishaa Nadkar.

The company, which abandoned its $1.65 billion deal to buy Canada’s Cineplex (CGX.TO) last week, expects to reopen in the United States and the UK on July 10. Shares in the company, which have fallen around 64% so far in the year, were seen opening 10% higher, according to premarket indicators. Cineworld, which had shut down its theatres due to coronavirus-led restrictions, said it had updated its booking system to ensure social distancing in its auditoriums, along with adapting movie schedules to manage queues and avoid the build-up of crowds in lobbies.

Cineworld, which operates about 9,500 screens globally, with more than 7,000 in the United States, also secured an extra $110 million from lenders and a waiver on loan covenants last month to help it survive lockdowns. Director Christopher Nolan’s thriller Tenet will debut in cinemas on 31 July, the first new blockbuster release in months for movie theatres that need fresh films to lure audiences after the closures.

UK aims to restart sport in near future with new taskforce

Britain is looking at how competitive sports can resume behind closed doors in the near future, culture minister Oliver Dowden said on Wednesday (20 May), under a new taskforce examinining how the recreational and leisure sector can restart, write William James and Andy Bruce.

Dowden said the taskforce would “help us think through how we can get sport back safely in a way that works for both clubs, players and supporters alike.”

He added that guidance published last week for how elite athletes could resume training would “pave the way for the return of live sports behind closed doors in the near future.”