On Tuesday 15 November, EU Reporter, in association with the EU-Asia forum, organized an event which brought together representatives of the expert and media community, both from Europe and Asia, which took place at Press Club Brussels. The future of China was at the centre of the discussion, and examined the ever-pressing need to understand this global giant, writes Natalia Ziemblewicz.

Firstly, Beijing is reviving the historic Silk Road trade route that rivals the Marshall Plan in its global reach. Officially known as One Belt, One Road, its aim is to create modern version of an ancient network, connecting China with its western neighbors: Central Asia, the Middle East and Europe.

In the words of Chinese President Xi Jinping: “The economic belt along the Silk Road is home to almost 3 billion people, and represents the biggest market in the world with unparalleled potential.”

China’s economy is clearly slowing down. Today, its growth is half of what it was. But interestingly enough, despite this slowdown, the country remains the single largest contributor to world GDP growth. In brief, China remains and will remain the world’s major growth engine.

According to Frank Pieke, professor at Leiden University, it is a huge mistake to look at China only from a western point of view. Why? Simply, because the country represents a unique kind of neo-socialist society that combines features of state socialism, neo-liberal governance, capitalism and globalization.

“Instead of judging China by standards which are external to it, we should move beyond western preoccupations and try to adopt Chinese perspective,” he said:

As stated by Men Jing, Professor at the College of Europe, it is clear that China is far from a western-style democracy and market economy: “The country is still experimenting with its system. It is in the transitional period.”

Another issue discussed by panelists was a potential impact of Donald Trump on US-China relations.

“If we look at history, we will see that China and the US have always been partners, especially in terms of trade. I believe that they will co-operate no matter who is elected president,” said Doctor Ying Zhang from Erasmus University, Rotterdam.

What is a common denominator of Brexit, Trump and Chinese Communist Party? According to Kerry Brown, professor at the Lau Institute: “Just like the Brexit and Trump campaigns, the Party has made many promises. The questions is whether they could deliver.”

There is no doubt that the mass media have a powerful influence on deepening ties between Brussels and Beijing. What are the biggest challenges facing journalists in reporting on EU-China relations?

“There is a huge difference between classic media, like The Financial Times or The Wall Street Journal, and Brussels-based media, such as EU Observer or EU Reporter. Classic media have their own correspondents in Beijing, while we have to look at China from Brussels only,” 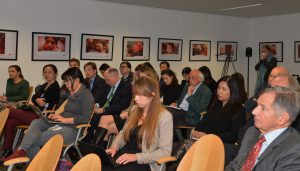 This is why EU Reporter has signed a Memorandum of Understanding with the People’s Daily of China.

“Our partnership enables us to report on many issues concerning EU-China relations. We published more than 100 China-related stories in the past year,” said EU Reporter Publisher Colin Stevens

“It is true that we don’t have the facilities to report from China. I think the answer is for us to create our own One Belt, One Road media,” concluded Stevens.

#TaxEvasion: 'Europe alone can have a very significant impact'