Related Topics:Croatiaeufeaturedfull-image
Advertisement
Up Next

#Coronavirus response: €135 million of Cohesion policy to strengthen the health sector and support the economy in Croatia 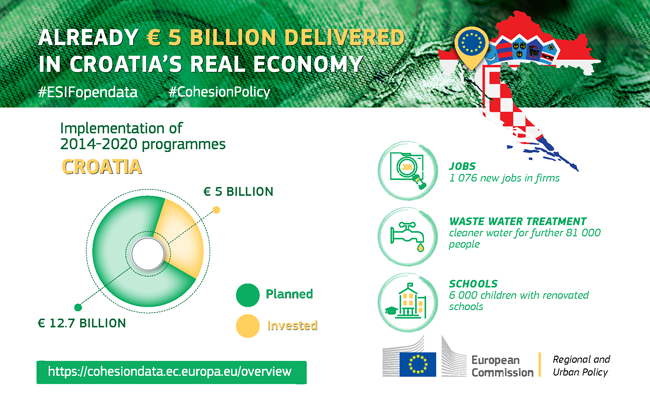 The Commission has approved the modification of the Operational Programme Competitiveness and Cohesion in Croatia redirecting almost €135 million of Cohesion policy funding to help the country tackle the effects of the coronavirus crisis. In particular, €50m of EU funds will serve to purchase medical and protective equipment for over 1200 hospitals, other health institutions and elderly homes, while Croatian SMEs will benefit from almost €85m for continuing their operations and saving employment.

In addition, the programme will temporarily benefit from 100% co-financing from the EU budget. Cohesion and Reforms Commissioner Elisa Ferreira said: “Cohesion policy is playing an important role in the response to the pandemic and prompting a sustainable way to recovery. Thanks to the joint and swift efforts of the Croatian authorities and the Commission, these resources are providing much needed relief and support to the country's health sector and economy.”

The modifications are possible thanks to the exceptional flexibility under the Coronavirus Response Investment Initiative (CRII) and Coronavirus Response Investment Initiative Plus (CRII+), which allow member states to use Cohesion policy funding to support the sectors most exposed to the pandemic and its economic consequences, such as health care, SMEs and labour markets. More information is available here.

Sincic, who climbed on the roof of the van, warned that the broken watermelons represent "hundreds of thousands of other watermelons and other fruits and vegetables that will be plowed or destroyed this year" because imported products, often of lower quality, have flooded the Croatian market and systematically destroyed domestic production.

The protest could not be avoided even by the ministers who started arriving before the government session.

"We call you to urge for us farmers. Only Croatia is doing nothing, all other countries are protecting their producers," protester Marina Galovic told Finance Minister Zdravko Maric.

She offered the minister a watermelon, but Maric refused.

"The minister did not want to take the watermelon. Taxes and contributions were paid on that watermelon. I guess out of humiliation. You eat what we produce and you humiliate us. It's not just us, it applies to all industries," the indignant protester said after the meeting with the minister.

Germany issued a warning against travel to parts of Croatia on Thursday (20 August) as Europe’s largest economy battles to contain a rising number of coronavirus cases during the summer season, write Caroline Copley, Michael Nienaber and Andreas Rinke in Berlin.

The German foreign ministry advised against travel to the regions of Sibenik-Knin and Split Dalmatia, which are popular with tourists, after the public health agency declared them coronavirus risk regions, making tests for returnees mandatory.

The number of new cases in Germany has been rising steadily since early July and has accelerated in recent weeks. On Thursday, the number of confirmed cases climbed by 1,707 to 228,621, marking their biggest daily increase since April 26.

Imported cases of the coronavirus have risen to 39% of overall new infections in Germany this week, up from around 30% last week.

Croatia is the source of the third-highest number of infections among people returning to Germany, after Kosovo and Turkey, according to data from the Robert Koch Institute for infectious diseases.

Concern is growing that people may be getting infected while visiting family members in those countries.

Davor Bozinovic, Croatia’s interior minister, said a ban on nightclubs staying open beyond midnight would likely be extended and added: “Less than 1% of tourists got infected (in Croatia).”

Statistics from the health ministry in North Rhine-Westphalia, Germany’s most populous state and hit relatively hard by the pandemic, found more than a third of returnees who tested positive for coronavirus between July 1 and Aug. 16 came from Kosovo, with Turkey in second place at almost 20%.

Those returning from more traditional holiday countries, such as Spain and Greece, made up just 2.5% and 0.5% of positive cases in the state, respectively.

Germany also urged people not to travel to the Valcea region of Romania, but removed a warning for the regions of Ialomita, Mehedinti and Timis. It also lifted a travel warning for Luxembourg.