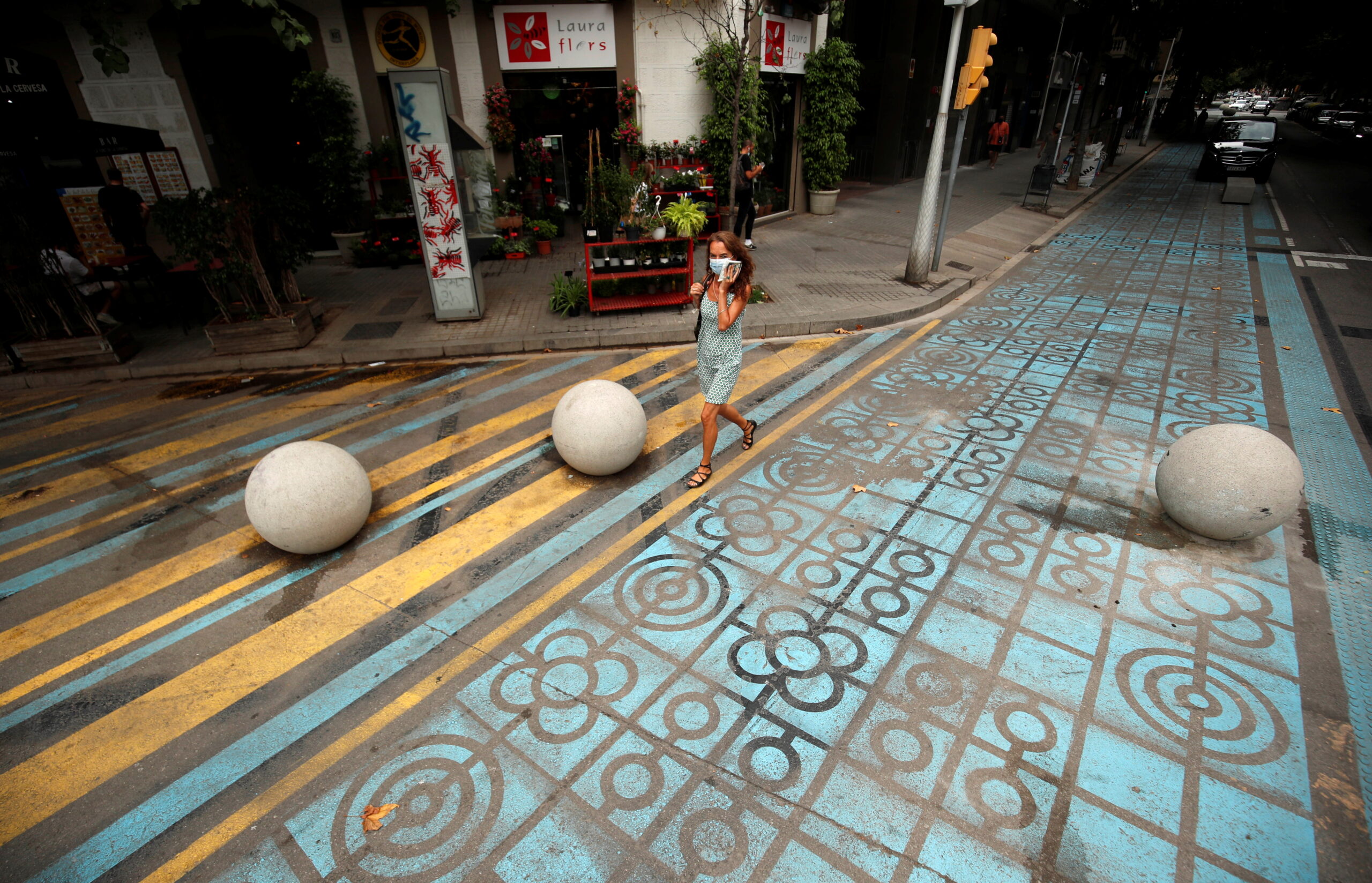 When Spain lifted its strict pandemic lockdown in the middle of last year, residents of Barcelona found some of their streets were not as they remembered them, write Joan Faus and Luis Felipe Castillej.

The Consell de Cent, a broad street that runs through the city centre, had lost two of its three car lanes to a widened sidewalk now painted yellow.

Originally described as provisional by city authorities, the changes are still in place a year later despite opposition from some business groups.

More is to come under a plan to convert 21 streets, totalling 33 km (20 miles), into pedestrian green spaces.

The project illustrates how the pandemic has influenced urban planning across the world, accelerating changes such as more bike lanes and fewer cars amid growing concern about climate change.

Since March 2020, Barcelona has reclaimed around eight hectares of the cityscape from motor vehicles, transforming it into sidewalks, playgrounds, bike lanes or restaurant terraces, with authorities arguing that people need more space to avoid COVID-19.

Along with Paris, which has also been creating more bike lanes, Barcelona has aggressively exploited the pandemic to embrace an urban overhaul.

The plan has attracted strong criticism from Foment del Treball, a regional business lobby, which says it could cost 50,000 jobs, in part because it makes it harder for delivery vans to park, while shops could lose out-of-town customers.

"We consider it a persecution of the private vehicle to remove it from the city without offering any alternative," said the group's deputy chair, Mar Alarcon.

Matilla said the health crisis had shown that if cities do not become greener, more people will leave, following those who have already moved to rural areas with better air quality and more outdoor space over the past year.

"The pandemic has functioned as a magnifying glass that has made us see that health should be one of the central aspects in the management and planning of the city," he said, adding that Barcelona was discussing urban transformation initiatives with London and Paris.

In London, however, some pandemic traffic-reduction schemes have faced legal challenges or have been reversed.

Barcelona's leftist municipal government aims to transform a third of all the streets in the Eixample district, famous for its Modernist buildings, into a so-called pedestrian green axis by 2030, completing the first four, among them Consell de Cent, by 2023.

Although spurred by the pandemic, the push is environmentally driven as Spain's second largest city seeks to improve air quality.

The European Commission asked the EU's top court to take action against Spain in 2019 after Madrid and Barcelona regularly exceeded legal limits on nitrogen dioxide, saying this could cause almost 9,000 premature deaths annually.

As the lockdown curbed traffic, all of Barcelona's monitoring stations last year registered pollution levels below the EU limit for the first time, according to the city's public health agency, which estimated this had prevented around 600 deaths and reduced new cases of asthma and lung cancer.

Last year, Barcelona banned the most polluting vehicles from the city, although in Madrid a similar scheme suffered a setback in the courts.

Luca Telloli, a member of the environmental group Eixample Respira, urged Barcelona to be even braver in curbing pollution as around 350,000 vehicles drive through the Eixample daily, and called for more open public discussion of its plans.