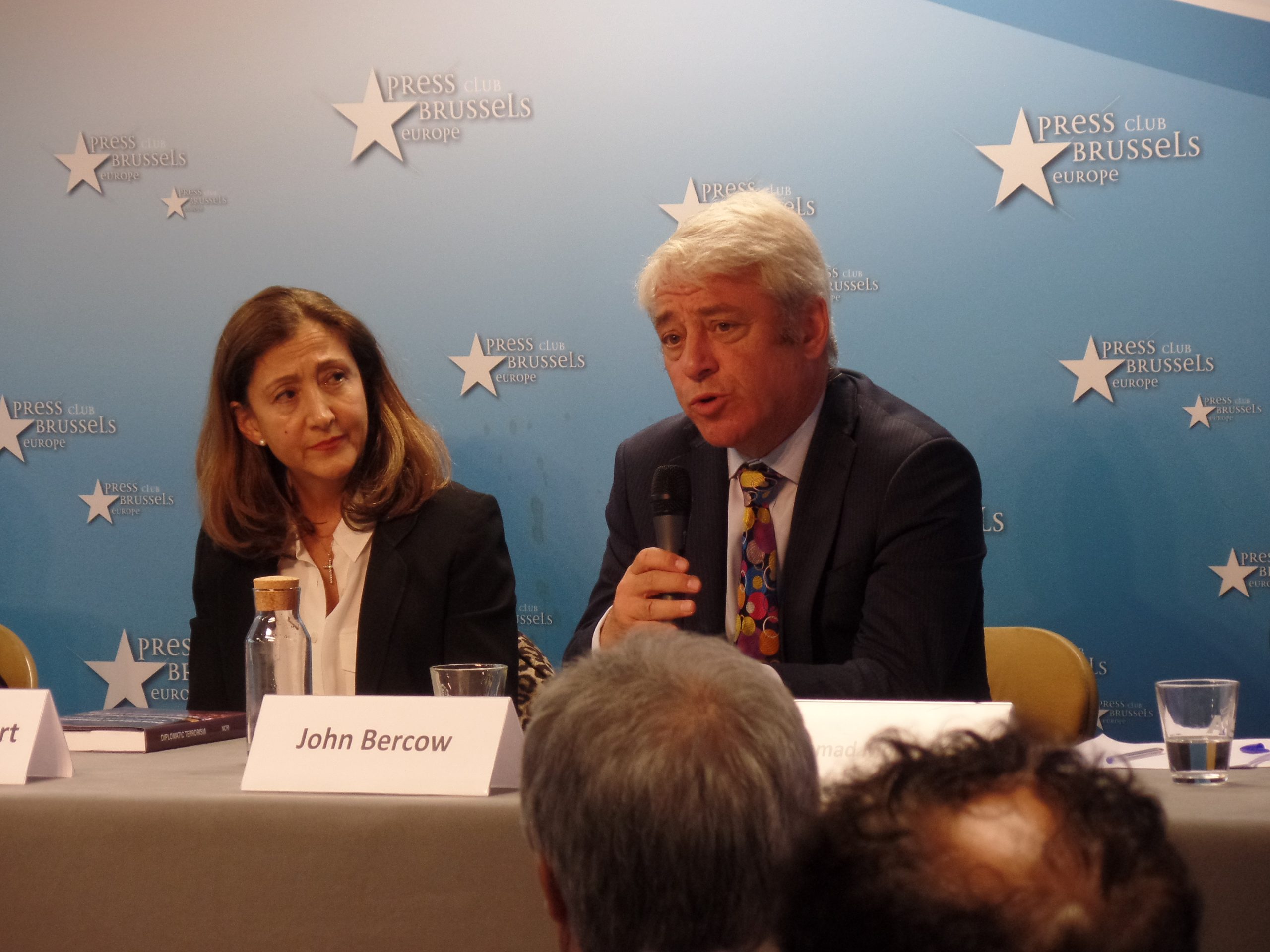 John Bercow, the former Speaker of the UK House of Commons, has led calls for Belgium to reconsider the possible extradition of a convicted Iranian national. Bercow, one of the most instantly recognisable of British politicians in recent years, was among several speakers who travelled to Brussels to make an impassioned plea for a rethink on the case by the Belgian authorities.

The Belgian State has been strongly criticised over plans to extradite Iranian diplomat Assadollah Assadi to Iran.

Assadi was sentenced in Belgium on 4 February 2021 to 20 years in prison for his involvement in a thwarted bomb attack in June 2018 at the Free Iran World Summit in June 2018 near Paris.

He and three of his accomplices were convicted by a court in Antwerp from 17 to 20 years of prison for their part in the plot and are serving their term in Belgium.

The National Council for the Resistance in Iran (NCRI) organised a press briefing at the Brussels Press Club (16 September) where Bercow and others spoke. It was also a chance to promote a book by the NCRI on the case.

The furore comes after the Belgian Parliament controversially passed a bill that would allow extraditions between Belgium and Iran including an exchange for a jailed aid worker and an academic. Ratification of the treaty would pave the way for the release of Assadi.

Critics, including Bercow, say that Belgium is giving into “Iranian blackmail” in order to secure the release of one of its nationals in Iran and that the treaty will put more Belgians in the country and elsewhere in Europe in “real” danger. Iran has denied such claims and defended the treaty arrangement with Belgium.

Assadi continues to strongly deny any involvement in the plot and Tehran has also reacted furiously to the sentence, demanding that Belgium recognise Assadi's diplomatic status and release him.

Iranian state-run media have also strongly criticised Assadi’s arrest and conviction, insisting that he was framed.

Earlier this year, presenting the Belgium treaty "on the transfer of sentenced persons" to MEPs, Belgian Justice Minister Vincent Van Quickenborne tried to decouple the text from the Assadi case.

The row comes as tensions are rising between the EU, US and Iran over a nuclear deal with no end in sight.

No one from the Iranian side was present but the well-attended meeting at the Press Club was timely as a Belgian court is due to rule on the controversy.

The court will be asked to decide if the release should be stopped and referred to the country’s constitutional court whose role would be to undertake a “comprehensive “ review of the case.

Bercow told the press briefing, “I am not easily moved but I have been moved and permanently seared by what I have heard here today and I should thank the press club for enabling people who don't know each other but who have come together today in a common spirit.

“We are all, frankly, horrified by the (terrorist) act and also the quite extraordinary response to that act to date," he stated.

Referring to the thwarted Paris attack, he claimed,, “It is hard to think of anything more heinous or a more pre-meditated act, all with government endorsement and done over a period of many months.

“The aim was coldly, cynically and cruelly to commit mass murder," he said.

He added, “We are all aware of the impact of terrorism and particular incidents including in London and Manchester and this plot was conceived by someone who rejoices in the title of a diplomat with the apparent full support of his government. If this attack had not been foiled the number of victims could have run into the thousands, such the wilful indifference to human life. To then assert the right to diplomatic immunity is an insult to the thousands engaged in the very responsible profession of diplomatic service.”

Bercow told the press briefing, “In Iran, the idea of diplomacy seems to be to plot and scheme killings on a mass scale of people who dare hold views different to its own.”

On the planned Belgian extradition treaty, he alleged, “This must be one of the most risible pieces of legislation I have encountered. It is absolutely deplorable, a pitiful state of affairs.”

“Remember: if you appease the monster it will devour you. This should be blindingly obvious so this law should be set aside and repudiated. This  issue deserves massive media attention because this is just plain wrong.”

He also paid tribute to the National Council for Resistance in Iran, saying, “In 22 years in the Commons I never came across an opposition force more resolute and effective than this.”

On the book, he stated, “This is not rhetoric but a serious academic piece of work.”

The book, “Diplomatic Terrorism, Anatomy of Iran’s State Terror,” gives an account of the plot from inception, planning and execution. The account has been strongly rebutted by the Iranian authorities.

Several civil parties to the case, including Ingrid Betancourt, former Colombian senator and presidential candidate, and Robert Torricelli, a former US Senator (Democrat), also spoke at the press briefing. They were both present in the 2018 Free Iran gathering and said they could have been among the would-be casualties.

Torricelli stated, “I usually avoid getting involved in the internal affairs of another country but despite this, I am frustrated with this. I hope this treaty will never be implemented and will be repealed but will take a tragedy for that to happen? Must others die?”

He claimed, “The book is a blueprint of a terrorist act. This was not a rogue act by a common criminal. The Iran government decided to use Belgium to kill people. Last June I sat a few seats from the main target of the attack and the only reason I was not killed was the skill of the authorities. It is not too late to do something until this man boards that plane to Iran but the moment he's returned will send the message that Belgium has become a base for terrorism in Europe.”

“Iran will base its operations in Belgium because it feels it can do so with impunity.”

He concluded, “This legislation could unleash terror. All this contrasts with the international unity shown against Vladimir Putin. What a contradiction.”

Betancourt commented “I spent  6 years as a hostage and it is very important to highlight this book. I knew many of these things (in the book) but also want to know the details about the plot. It made me realise something that I found very disturbing: the human part behind the plot. We have to remember who we are talking about here: one of Iran's most important agents and the 1st Iranian diplomat convicted by a European court for such a crime.”

She told Brussels-based reporters, “I was very keen for justice to be done but this was not easy because he was a diplomat and a lot of agencies had to get all evidence to the judge who had to take the hard decision to detain a diplomat, which is not usual.

“He was sentenced to 20 years, the maximum and the reason is that he is a very dangerous person, dangerous in Iran and around the world," she said.

She added, “My concern is that he may be sent back to Iran. We must look closely at this before we give a passport to Iranian criminals all over the world who are under the protection of the Iranian regime. This treaty to return him to Iran was done via blackmail. I know what it is to be a hostage and me and my family suffered for over 6 years. After 15 years of freedom, we still suffer the trauma this caused so I know the price of freedom. My experience tells me we must not surrender to blackmail. If we do we will open Pandora's box.

“I was liberated by an outstanding military operation. That opened the path for a peace treaty in my country. EU capitals have been targets of mass killings and all have a common thread. If we accept to negotiate and exchange criminals they will know they have a way out. I am not saying we should not find a solution to all this and we do need diplomacy to bring our citizens back but we cannot exchange them for criminals.”

Another speaker was Mohammad Mohaddessin, Chair of the Foreign Affairs Committee of the NCRI who spoke of the Iranian regime’s apparatus and “how impunity can facilitate more terrorism", adding, "Paris was state terrorism and made at the highest level. But EU countries failed to act and this further emboldened the regime which is now trying to secure this man’s release under the pretext of claiming diplomatic immunity. The regime also demands compensation for what they say is his unlawful detention." he said.

On the treaty signed by Belgium, he claimed, “If he is released it will give carte blanche to the regime and more similar plots  so it is time for Europe to take decisive action and shut down all its diplomatic missions in Europe and expel its diplomats.”

The panel also included Mark Demesmaeker, a member of the Belgian Senate and an ex MEP, who said there had been some opposition to the Treaty in Belgium. He added, “I too was moved and impressed by what Ingrid said today. I have to tell you that many in parliament opposed this deal but it was voted through. It is very detrimental to democracy and also the credibility of my country. This is what is at stake.

He said that extradition will send a “bad signal to the international community. Why release a terrorist sentenced to a maximum of 20 years? This is tragic for Belgium and incentivises Iran to take more hostages. It is an insult to those who brought him to justice. Their efforts will have been ruined. It is unbelievable so many questions need to be asked of Belgium on this," said the MP.

Despite European Jewish leaders’ protests, watch belonging to Hitler auctioned in the U.S.