The meeting saw a presentation by controversial Israeli NGO Breaking the Silence of about their recent report on anonymous testimonies of 70 IDF soldiers  who served during Operation Protective Edge alleging that Israel acted illegally during this war.

The committee’s meeting highlighted the stark contrast between the IDF and Hamas, the Islamist movement governing Gaza, and the IDF when it came to respect for fundamental human rights.

Whilst Hamas eagerly uses the Palestinian population as collateral damage in their PR war, Katzman stressed that Israel respects international humanitarian law and laws of armed conflicts, as repeatedly stated by high ranking generals and majors who have observed and seek to emulate IDF’s best practices in cases of armed conflict.

In a moving and deeply personal testimony, Katzman outlined to the MEPs a number of situations he found himself in during the army’s incursion into Gaza.

As far from the IDF blood lust as propagated by Hamas and by the Breaking the Silence report, Katzman outlined a restrained and moral approach by the IDF, guided by his training and the maxim “if in doubt, don’t shoot”.

“Not only is this a moral imperative, but a legal one too.” said another speaker, Ohad Zemet, from the office of the legal adviser at the Foreign Ministry in Jerusalem, outlining the strict guidelines in place that ensure Israel meets, and often exceeds international legal norms.

“Hamas is probably the only enemy in the world that receives advance warnings of places and timings of counter strikes”,  Zemet mentioned.

Katzman acknowledged that “there are bad eggs in every batch.” “But the Israeli society rejects them. They don’t represent the army as a whole and are tried and sentenced to the full extent of the law.” It’s Not something that can be said for Hamas terrorists who use human shields and whose actions are glorified and celebrated with impunity,” he said.

For him, the Breaking the Silence report is “problematic,” as statements are “anonymous, unverified, distorted and out of context,” adding that they fail to represent the realities and complexities of the war zone. Some 70 soldiers speaking to a “politically motivated NGO,” he said, do not represent the full truth or extent of the matter. He described the organisation and its activities outside of Israel as an exercise in “Israel bashing.”

The Israeli government last Sunday published the result of its investigation into the Gaza war, stating that Operation Protective Edge was “lawful” and “legitimate”, and that it did not deliberately target civilians, praising the IDF as the “most moral army in the world.”

After conducting a fact-finding mission, a so-called High Level International Military Group, consisting of 11 former chiefs of staff, generals and US and European officials, went as far as to say that Israel went out of its way to protect Palestinian civilians during the conflict.

Austrian European Affairs  Minister Karoline Edtstadler (pictured) stressed Austria’s responsibility to fight anti-Semitism regardless of whether it comes from the far right, leftists, immigrants or anybody else, writes Yossi Lempkowicz.

The Austrian government presented on 21 January its strategy to fight anti-Semitism which includes enhanced protection of synagogues, improved education about Judaism and stricter prosecution of hate crimes against Jews.

Austrian European Affairs  Minister Karoline Edtstadler stressed Austria’s responsibility to fight anti-Semitism regardless of whether it comes from the far right, leftists, immigrants or anybody else.

The new measures intend to battle anti-Semitism in all its forms and wherever it expresses itself — from online chat groups to hate speech in corner bars or expressions of hatred against Jews at public protests such as the current rallies against coronavirus regulations, Edtstadler said.

The strategy presented is based on six pillars: education, security, law enforcement, integration, documentation and civil society. A total of 38 concrete measures were announced, such as the creation of a separate documentation center for anti-Semitic incidents and a new staff unit for coordinating the fight against anti-Semitism. Austrian also wants to work more closely at the European level, for example by making data on incidents comparable, as the EU declaration also called for.

This strategy is “a milestone in the fight against anti-Semitism”, said the Karoline Edtstadler during the presentation. “We have to protect Jewish life and make it visible. May it succeed.”

At the same press conference, Oskar Deutsch, President of the Israelitische Kultusgemeinde Wien, the Jewish community of Vienna, thanked the minister for her work. “The best answer to anti-Semitism is Jewish life,” he said. ‘’But the political plans now have to be filled with life,’’ he added.

Katharina von Schnurbein, the European Commission’s Coordinator on combating antisemitism and fostering Jewish life, praised the Austrian strategy announcement and welcomed the fact that the Austrian documentation center will ensure that data material that is comparable across Europe is collected.

Anti-Semitic incidents are rising across Europe, including Austria. During Corona demonstrations one can see banners with anti-Semitic symbols. Last August, the president of the  Jewish community of Graz survived an attack. The anti-Semitic background to the terrorist attack in Vienna in November has not yet been officially confirmed, but the perpetrator’s early shots were aimed at the Jewish city synagogue. This is probably one of the reasons why the Austrian government is tripling its investments in protecting Jewish institutions to four million euros.

“Jews are always the first ones who are affected by discrimination,” Deutsch warned, adding that the fight against anti-Semitism needs to be an effort by the whole of society, not just the Jewish community.

“That is twice as much as five years ago,” she added

Fighting antisemitism: Commission and International Holocaust Remembrance Alliance publish handbook for the practical use of the IHRA working definition of antisemitism 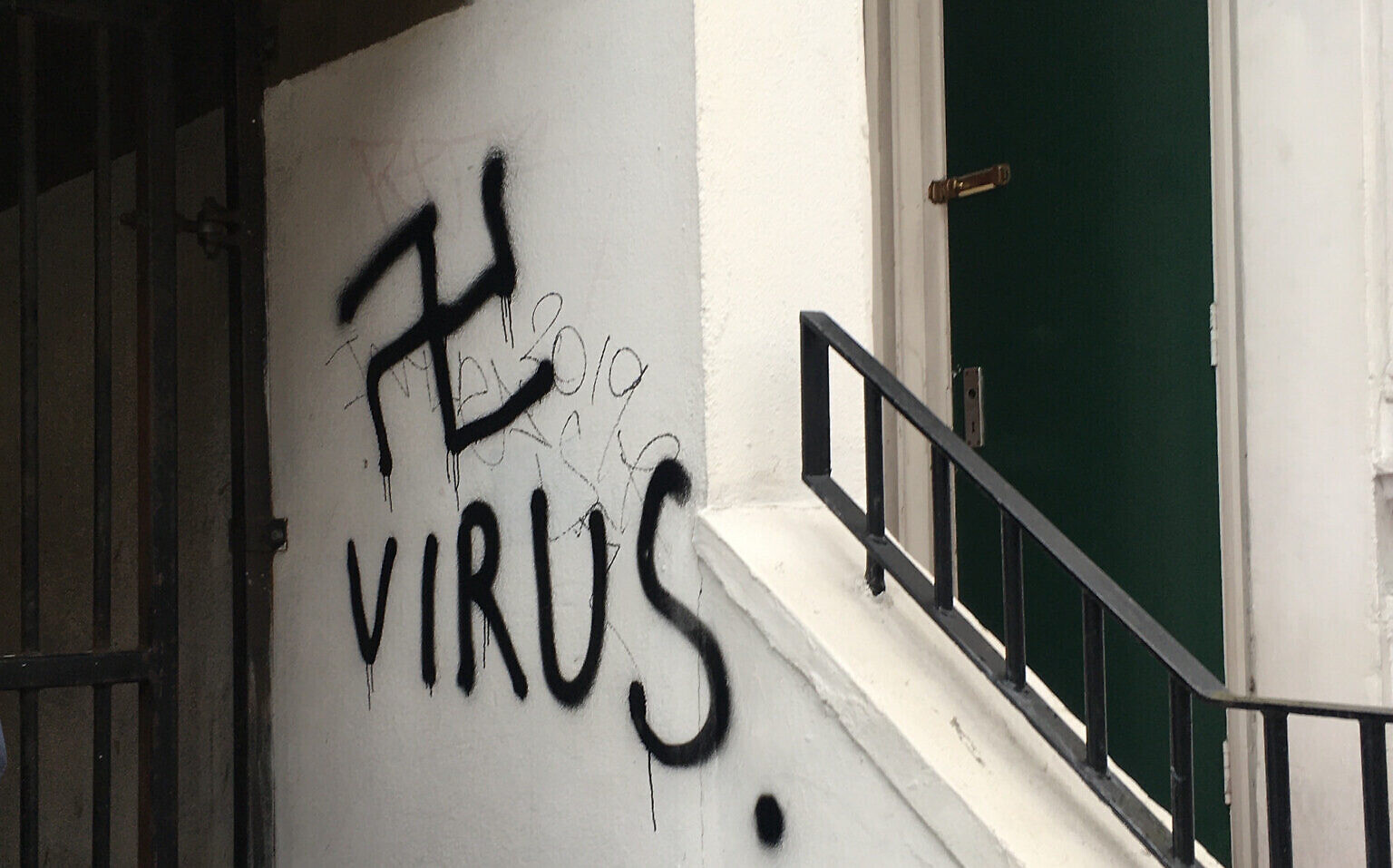 The handbook for the practical use of the IHRA working definition of antisemitism has been published. This document was commissioned by the European Commission and published jointly with the International Holocaust Remembrance Alliance, with support from the German Presidency of the Council of the European Union. The IHRA working definition for antisemitism, while not legally binding, has become a widely used tool around the world to educate people about antisemitism, as well as recognise and counter its manifestations.

Based on the comprehensive research carried out by the Federal Association of Departments for Research and Information on Antisemitism (Bundesverband RIAS), the handbook provides an overview of good practices by international organisations, national administrations, civil society and Jewish communities from across Europe. The 35 good practices are ranging from training for law enforcement to incident recording and reporting. Furthermore, the handbook includes 22 sourced incidents of antisemitism in Europe that highlight the relevance of the IHRA working definition of antisemitism when assessing manifestations of antisemitism.

Vice President Schinas said: “We need to fight antisemitism whenever we encounter it. Jewish life is part of our societies and we are determined to protect it. This new handbook makes it easier for all to fulfil this commitment. It responds to our member states' requests for better knowledge-sharing on the use of the IHRA definition. The handbook will become another valuable tool for member states to effectively implement the landmark Council Declaration on combating antisemitism.”

Values and Transparency Vice-President Věra Jourová said:  ‘It is more important than ever to think critically, to not believe immediately what you read and hear. Countering disinformation and promoting democracy are crucial principles to our democratic societies and to the functioning of the European Union.”

The European Commission created the ad-hoc Working Group on antisemitism within the existing high-level member states expert group on racism and xenophobia to help member states in the implementation of the Council Declaration on the fight against antisemitism and the development of a common security approach to better protect Jewish communities and institutions in Europe of 6 December 2018. More information on the Commission's work to tackle antisemitism can be found here.