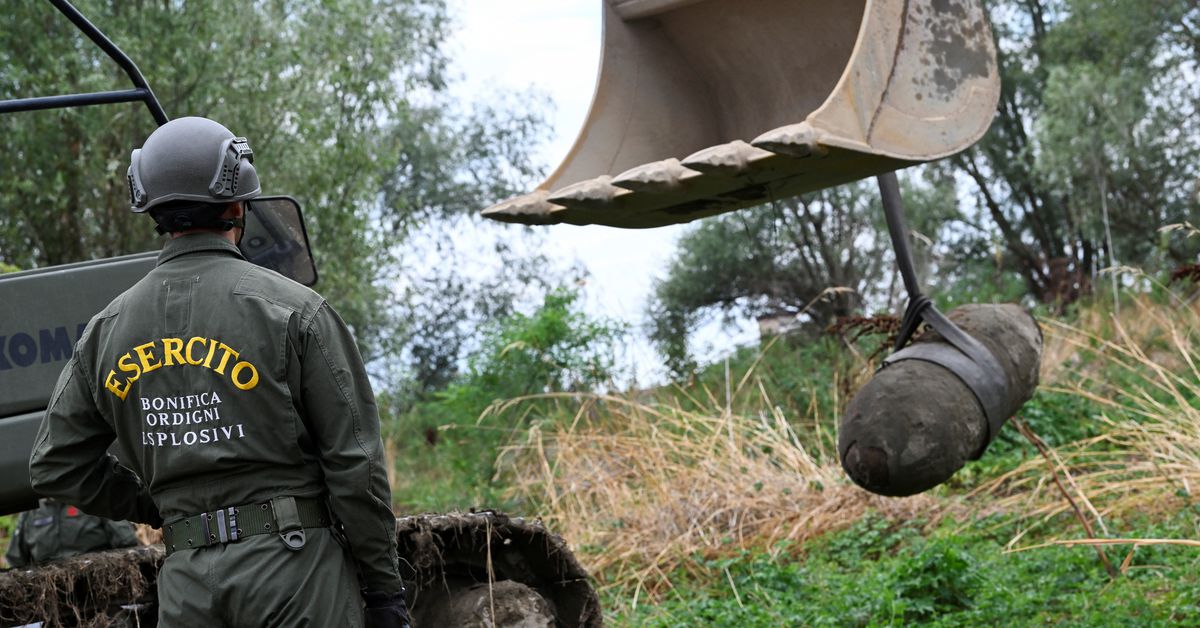 Italian soldiers remove a World War Two Bomb that was found in the dry-up River Po, which had been suffering from the worst drought for 70 years. It was discovered by members of the Italian Army, Borgo Virgilio (Italy), 7 August, 2022.

Heatwaves that have swept Europe this summer have not only brought record heat and scorched fields, but also drought-stricken waters in Italy's River Po, which are so low that they revealed a World War Two bomb.

On Sunday (7 August), military experts conducted a controlled explosion to defuse the bomb, which was found near Borgo Virgilio in northern Italy, and it weighed 450 kg (1,000 pounds).

Colonel Marco Nasi stated that the bomb was discovered by fishermen at the banks of the River Po by a drop in water levels due to drought.

Clearing the bomb was not an easy task.

The army said that approximately 3,000 people were evacuated from the area to facilitate the disposal operation. Navigation along the waterway was halted, as well as traffic on the nearby railway line and state roads.

"At first some of the residents said they wouldn't move. But in the last few days we think we have persuaded everybody," Francesco Aporti, Borgo Virgilio mayor, said. He added that if people refused to leave, operations would have been halted.

Bomb disposal engineers removed the fuse, which was a U.S.-made device, that contained 240 kg (530 lb) of explosive.

Police escorted the bomb squad to the quarry in Medole, about 45km (30 miles) away. There it was destroyed.

Italy declared an emergency last month in areas around the Po, the longest river in the country. It is responsible for about a third of Italy’s agricultural production, and is currently suffering the worst drought in 70 years.