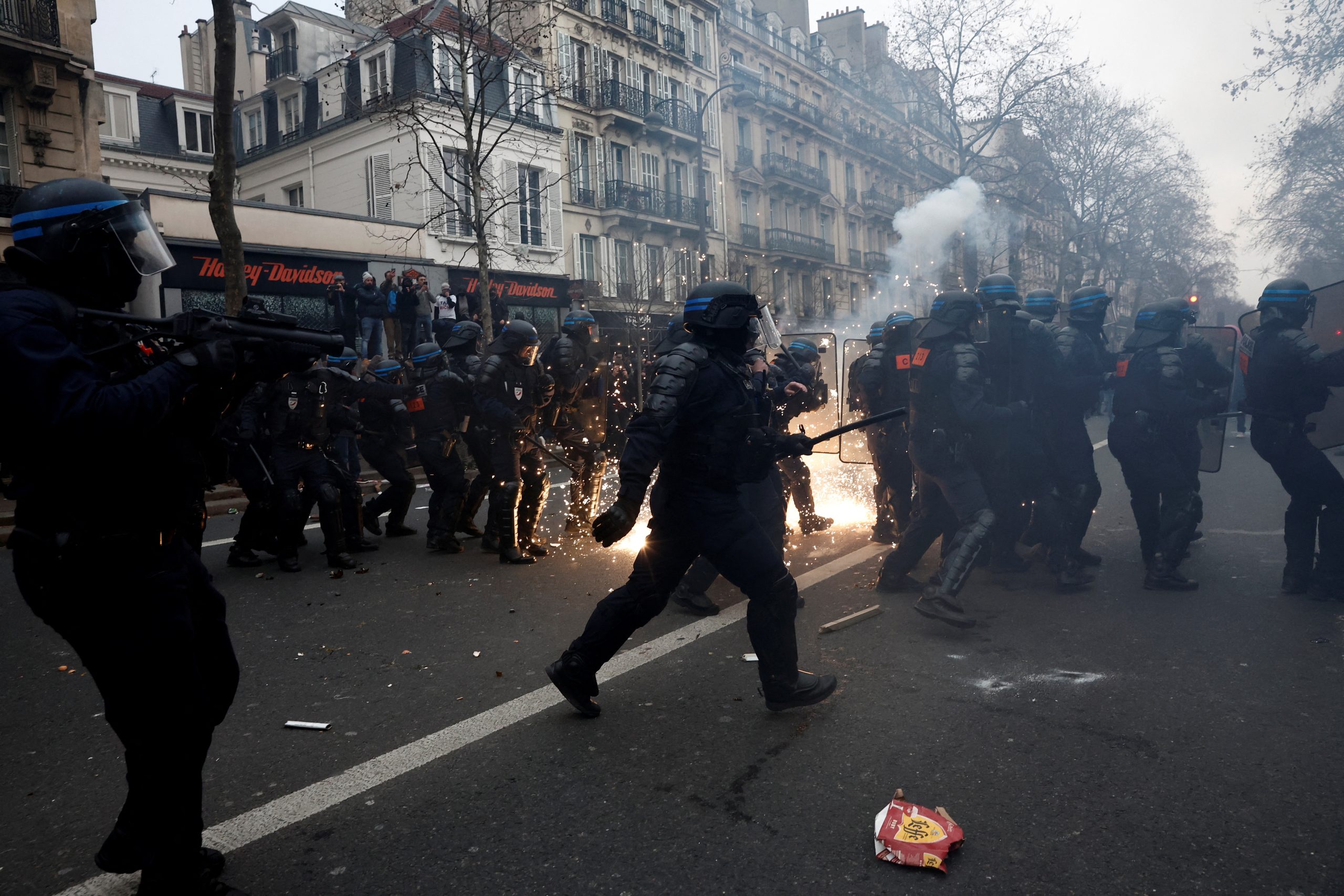 The country's top trade unions were buoyed by their success and called for a second day strike on 31 January to force Macron and his government off the rails on a pension reform plan that would have most people working an additional two years until they reach age 64.

In a joint statement, unions stated that "now the government finds itself with his back to the wall.

"Everybody knows that raising retirement age does not benefit employers or the poor."

Macron is facing major opposition from the protestors. He said that his reform of pensions was "just" and responsible and needed to maintain government finances on a solid footing. According to opinion polls, most French are opposed to the measure.

The Interior Ministry reported that 1.1 million people marched in protest across France in protests. This is more than the number of those who protested Macron's first attempt to pass the reform in 2019. When the COVID pandemic broke out, he abandoned that effort.

Intermittent skirmishes between police and hooded youths at the fringe of Paris' rally resulted in tear gas being used. Several dozen arrests were made.

One large banner, carried by workers in Tours (western France), stated that it was the salaries and pensions that should be increased, not retirement age.

Isabelle, 53 years old, a social worker, said that she would have to get ready for her walking frame if the reform is approved. She also stated that her job was too difficult to extend by two more years.

According to the government, the reform of pensions is essential in order to prevent the system from going bust. According to estimates by the Labour Ministry, the system could break even by 2027 by increasing the retirement age by two and by extending the pay-in period by €17.7 billion annually.

Unions claim that there are other options to fund pensions. These include taxing the super-rich, increasing employer contributions, or allowing well-off pensioners to contribute more.

Taxation is a way to solve this problem. Laurent Berger, leader of CFDT (France's largest labour union), said that workers shouldn't have to pay for deficits in the public sector.

Unions face the challenge of transforming opposition to reform and anger over the cost-of-living crisis into a mass protest that could eventually force government to change its stance.

Union leaders stated that Thursday (19 January) was only the beginning.

Macron lost his absolute majority, but hopes to pass the pension reform with the support from conservatives.

Train drivers, teachers, and refinery workers were some of those who lost their jobs. The same happened to half the workforce at EDF, the state-run nuclear power producer.

Beverly Gahinet, a restaurant worker, missed work due to her train being cancelled. She said that she supported the strike, even though she wasn't participating.

However, not everyone was so understanding.

Virginie Pinto, a real estate worker, said that it was always the same people who strike and she had to bear it as she tried to find a Metro to get to work.

Union members talk about recreating 1995's spirit, when Jacques Chirac’s government requisitioned tourist boat on the Seine to ferry commuters. They also backed off a pension reform after weeks of strikes.

However, the ability for unions to stop large swathes of the second-largest economy in the euro zone and force governments to reverse course is no longer possible.

The 2007 ban on wildcat walksouts and the requirement that strikers guarantee minimum public service have limited the ability of unions to derail governments' reform ambitions. Their impact may be hampered by home-working and other changes to working practices.

However, ferry crossings between Dover, Calais and Calais were halted by the strike. This is a key sea route for trade between Britain, Europe, and Africa.

TotalEnergies' (TTEF.PA), refineries in France blocked shipment, officials from the union and company claimed. However, the company stated that a strike day wouldn't disrupt refinery operations.