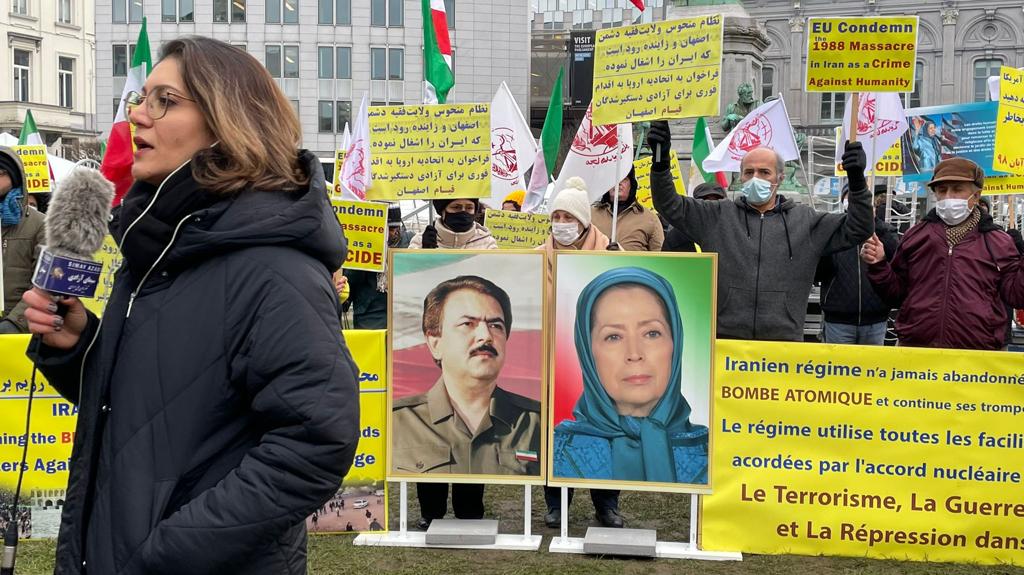 In a statement this week, some 100 members of the European Parliament wrote  to the EU leaders, including Josep Borrell, High Representative of the Union for Foreign Affairs and Security Policy, urging the union and its member states to recognize the "1988 massacre in Iran as genocide and a crime against humanity."

The MEP also called on the EU and its member states to adopt a firm policy, specifically regarding the nuclear talks with Iran and "to make the respect for human rights and abolition of death penalty a precondition in its relations with the Iranian regime.”

The President-elect of the National Council of Resistance of Iran (NCRI), Maryam Rajavi, was the keynote speaker. Addressing the event via a live video link, she said: “The massacre of 30,000 political prisoners in 1988 is the worst most egregious among the mullahs’ countless crimes. And this that crime is still ongoing. The carnage was carried out based on two decrees by Khomeini to massacre all the prisoners who supported the People’s Mojahedin of Iran. It was an obvious case of genocide, which was followed by the execution of prisoners of other political groups.”

Mrs. Rajavi underscored, “As far as the international community is concerned, silence and inaction towards this terrible crime is a sign of appeasement of Iran’s ruling murderers.

“…Such inaction emboldened the Iranian regime and led to the worsening of the human rights situation in Iran. The European governments remained silent and turned a blind eye on the slaughter of political prisoners and the crackdown on protests, thereby, giving the regime an open hand to continue its atrocities.

They thought the human rights abuses would be limited inside the Iranian borders. The experience of the past three decades has proven that this is was a mistaken view and a wrongheaded policy..”

The NCRI President-elect called on the MEPs “to adopt a resolution in the European Parliament to recognize the 1988 massacre as genocide and a crime against humanity and to support the Iranian people’s demand for the international prosecution of Ali Khamenei and Ebrahim Raisi for the massacre of political prisoners in 1988 and the November 2019 killings.”

The MEPs who attended included two presidents and six vice presidents of parliamentary groups, a former prime minister and a former head of state, two deputy prime ministers and 14 former European ministers, including the foreign and defense ministers of Poland, Spain, the Czech Republic and Lithuania.

In the summer of 1988, Ruhollah Khomeini, the founder of the Islamic Republic, issued a fatwa ordering the execution of political prisoners, particularly those affiliated with the People's Mojahedin Organization of Iran Organization (PMOI/MEK), who remained steadfast in defending democracy and freedom. Within weeks, 30,000 political prisoners, 90 percent affiliated with the MEK, were massacred after sham trials that lasted a few minutes.

Many preeminent international jurists have described the 1988 massacre as a manifest case of a crime against humanity and genocide and have called for justice and holding the Iranian regime’s leaders accountable for this horrific crime that has gone unpunished 33 years after it was perpetrated.

In their statement, the MEPs condemned the immunity enjoyed by the ruling theocracy’s officials in Iran and emphasized, “The incumbent president, Ebrahim Raisi was a member of the so-called ’Death Commission’ in the 1988 massacre of 30,000 political prisoners, mostly members and supporters of the PMOI/MEK, the democratic opposition to the regime. During his tenure as the Judiciary Chief, over 12,000 protesters were arrested in the November 2019 uprising and under his supervision, prisoners were subject to torture and many disappeared while in custody.”

The MEPs, including 18 members of the European Parliament's Foreign Affairs Committee, stressed that the Iranian regime's crimes and destructive behavior were not limited to its borders, and that "The flip side to the brutal suppression of human rights in Iran is its efforts to acquire the nuclear bomb, its long-range ballistic missiles production and expansion of terrorism, and warmongering in the region.”

The MEPs underscored, “Recently, the highest federal court in Switzerland ordered the federal prosecutor to investigate the assassination of Kazem Rajavi in Geneva in 1990 by the mullahs’ regime under the title of crime against humanity and genocide. Dr. Rajavi was the representative of the National Council of Resistance of Iran (NCRI) in Switzerland and a former ambassador.”

Should Europeans invest in Iran? No! Even after 2025