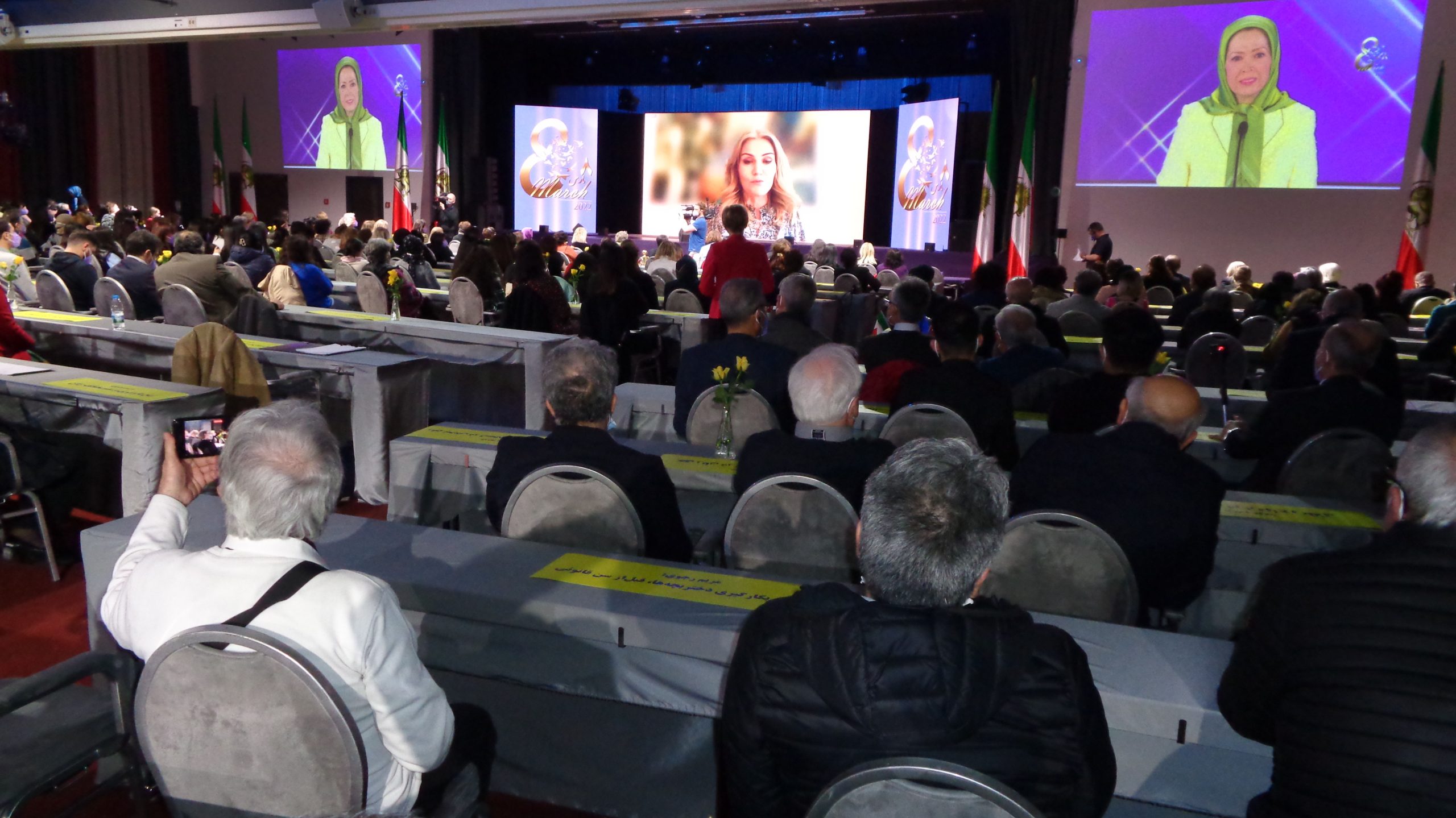 Personalities and politicians take part in international conference in solidarity with the Iranian women in the resistance, calling for a firm policy against the ayatollahs, express support for Ukrainian women.

On 5 March, on the verge of the International Women's Day, an international conference was held in the German capital Berlin, featuring political luminaries, lawmakers, and women's rights activists from 37 countries around the globe that called for solidarity.

Connected online to Ashraf 3 in Albania, where thousands of members of the Mujahedin-e Khalq (MEK) reside, as well as hundreds of other locations around the world. The conference expressed its support for the struggles of women worldwide, especially the resistance of Iranian women for freedom, equal rights, and elimination of unjust discriminations. They pointed the role of the Iranian women in the popular uprisings and protests, in particular in the MEK affiliated Resistance Units.

The conference’s speakers, representing a wide spectrum of political views and orientation, also announced their strong support for the heroic resistance of the people of Ukraine, particularly the women, who at times have made huge personal sacrifices to fight foreign invasion and their country’s integrity and sovereignty.

“Today, I extend my warmest greetings to the proud people of Ukraine, especially to the valiant women of that country,” said keynote speaker and the President-elect of the National Council of Resistance of Iran, Maryam Rajavi. “Millions of women and girls have risen up for freedom and rushed to the battlefield in droves; from ministers and parliamentarians to elderly mothers, have taken up arms. I salute those mothers who sent their children out of Ukraine so that they could themselves join the resistance.”

“The Ukrainian people’s resistance is not only an epic in defending the honor and survival of their country but also a turning point in reviving the culture of unswerving resistance in today’s world. They stood up and challenged the West’s appeasement and inaction. They stood up and motivated the world to support them. Their people and soldiers have stood firm like steel,” Mrs. Rajavi added.

Speaking about the daring struggle of Iranian women and their active role in recent uprisings, Mrs. Rajavi stated: “Throughout the past year, women were at the forefront everywhere in all protest movements, from the uprisings in Khuzestan, Isfahan, and Shahrekord to the protests of teachers, nurses, and the defrauded investors.”

Calling on her fellow countrywomen, the NCRI President-elect said: “The dark and bleak destiny does not change except through your mighty hands. The reactionary oppressors who have taken you captive will never offer you freedom and equality willingly; Rise up and overthrow them!”

“I commend Maryam’s courage and commitment to empowering Iranian women,” Urška Bačovnik Janša, the spouse of Slovenia Prime Minister told the conference. “I would like to take the opportunity of today’s event to pass a very strong message to my fellow Western women and Western governments. We must stand firm together, against the policies of the Iranian regime that strangles women’s freedoms. Words of western women’s organizations and governments must be put into action. We must be there for Iranian women.”

Ukrainian MP, Kira Rudyk connected to the conference from Kiev. She gave a passionate and moving description of life in Kiev and the people’s resistance, in particular the role of women. “All countries of the world said that we would not stand a chance and Kyiv would fall in 24-48 hours. It’s ten days and we are still standing. This happened because of our army and because of the bravery of the resistance,” she said.

Addressing the International Women's Day in Berlin, Ukrainian MP Lisa Yasko used very inspiring words. She stated: “To everyone who is listening, don’t give up on your country. We’re fighting for all of you. If we don’t defend our freedom right now, history will never be the same. I’m very proud of my nation and I send my love to all of you. We need peace in Ukraine. We need peace in the world.”

Frances Townsend, a former Homeland Security Advisor to the United States President said: “The women of the world lead the resistance for freedom across the world, whether it’s in Kurdistan, Ukraine, or Iran. I am humbled by the courage of women in Iran who fight for choice, for freedom, whether it’s for speech or the overthrow of the misogynist regime of Iran.”

Expressing her support for the NCRI and its leader, Maryam Rajavi, former Prime Minister of Denmark‎, Helle Thorning Schmidt said: “It is remarkable that the NCRI is actually led by a Muslim woman, Maryam Rajavi. Her ten-point plan is a blueprint for the whole world to see that there is a democratic future for Iran. All democrats across the world should support this plan.

According to Rita Prof. Rita Süssmuth, a former president of the Bundestag who attended the conference “Iran is a highly civilized country. You can see it in the women who come from Iran, the women in Ashraf. They survived the regime. They were not weak. Suffering can lead to fresh energy,”  “Maryam Rajavi is a woman that I admire,” she added.

Another prominent German politician, former German Minister of Defense, Annegret Kramp-Karrenbauer said: “A lot of women fight for their freedom even though they have to lay down their lives for a better Iran. A great example is Maryam Rajavi, who has laid out a plan for the future of Iran that is liberated from discrimination, where men and women are equal, a country that is not a hub of fundamentalism and terrorism.”

“Iranian women are at the forefront of all protests inside Iran. What does that mean for women who are suffering from gender apartheid across the world? Condemning suppression of women in Iran is not enough. We need to support these women in Iran and worldwide,” Mimi Kodheli, former Albanian Minister of Defense told the conference.

The conference included dozens of prominent speakers from all over Europe, US, Canada, and Muslim countries, including several members of the US House of Representatives.

Iran : Websites affiliated with Ministry of Culture and Isalmic Guidance taken down