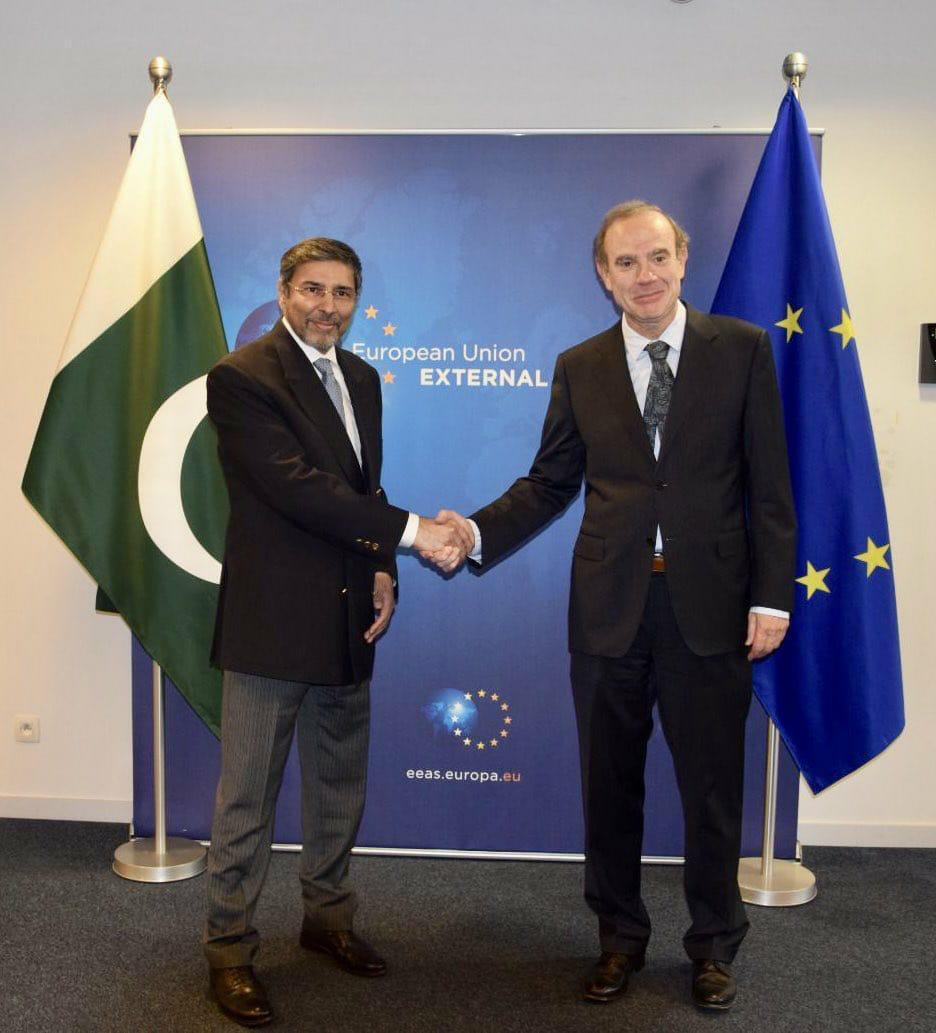 The 8th round of Pakistan-European Union Political Dialogue was held in Brussels on 29 November 2022. The Acting Foreign Secretary Jauhar Saleem and Mr. Enrique Mora, Deputy Secretary General of European External Action Service (EEAS) led their respective sides. Both sides noted the special significance of this round of Political Dialogue, marking the 60th anniversary of Pakistan - EU relations.

The dialogue covered a broad range of subjects in the context of Pakistan–EU relations, as well as regional and global developments. Both sides underlined the importance they attached to their multifaceted partnership. Expressing satisfaction on the positive trajectory of the relations, they agreed to continue working together to further deepen and broaden bilateral cooperation.

Acting Foreign Secretary appreciated the timely and invaluable humanitarian assistance and support provided by the European Union for the victims of the massive climate induced floods in Pakistan. He underscored that as a key trade and development partner, EU’s continued support would be pivotal in helping Pakistan effectively carry out rehabilitation and reconstruction efforts, and to build back the damaged infrastructure in a climate resilient manner.

The two sides acknowledged that EU’s GSP Plus scheme has been a successful template of trade for development and mutually beneficial trade cooperation. Sharing Pakistan’s position on the proposal for the new GSP Plus scheme, the Acting Foreign Secretary expressed the hope that mutual objectives, including sustainable development, poverty alleviation and employment generation will be appropriately prioritized in the new Scheme. He also conveyed Pakistan’s keenness to diversify the scope of trade, investment and development cooperation between Pakistan and the EU.

Both sides agreed to explore opportunities of cooperation under EU’s flagship programs like Global Gateway and Horizon Europe.

The two sides also welcomed the recent launch of a comprehensive dialogue on migration and mobility. The dialogue will provide an institutionalised platform for legal pathways for migration to Europe, seek talent partnerships, and enable effective implementation of the Pakistan – EU readmission agreement.

The Acting Foreign Secretary apprised the Deputy Secretary General of the dire human rights situation in Indian Illegally Occupied Jammu and Kashmir (IIOJK). He called upon the international community to use its influence to urge India to honour its commitment to the UNSC Resolutions.

He also highlighted that Indian illegal and unilateral actions of August 5, 2019 were aimed at undermining the internationally recognized disputes, and altering the demographic structure of the IIOJK were a blatant violation of the UNSC resolutions, 4th Geneva Convention and international law.

The Acting Foreign Secretary reiterated Pakistan’s principled stance for universal and consistent application of UN Charter Principles – including non-use or threat of use of force, respect for sovereignty and territorial integrity of states, pacific settlement of disputes, and equal security for all states in order to ensure lasting peace and security. He added that Pakistan continued to call for immediate cessation of hostilities and stressed the need for diplomacy and dialogue for an early, negotiated end to the Ukraine conflict.

Taking note of the multiple, complex challenges confronting Afghanistan, the Acting Foreign Secretary reiterated the importance of sustained engagement of the international community with the Interim Afghan Government in order to ensure wellbeing of the Afghan people.

Both sides agreed to hold the next round of the Political Dialogue in Islamabad in 2023.