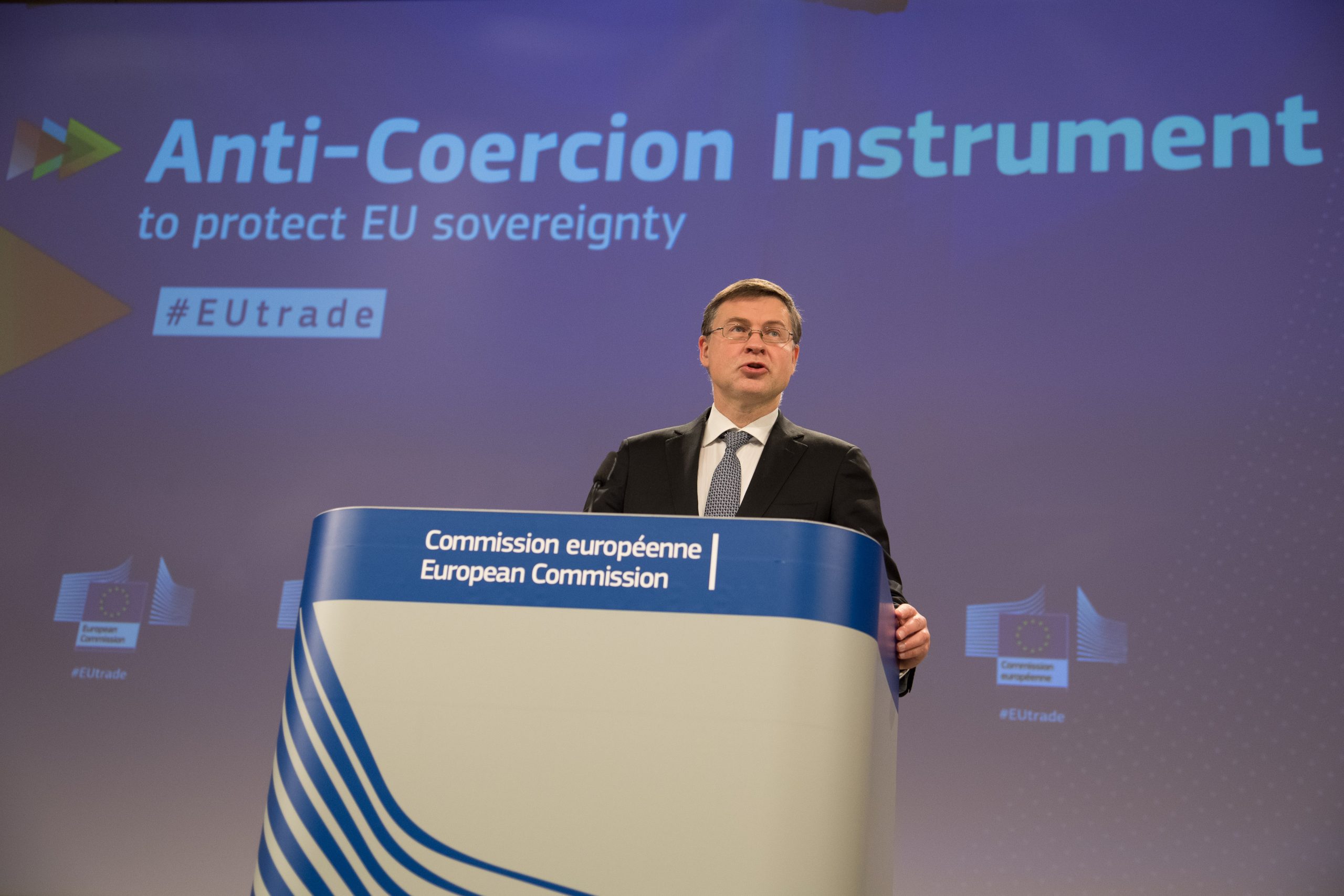 Executive Vice President Valdis Dombrovskis today (8 December) launched a proposal for a new tool aimed at countering trade being used as a form of coercion.

The proposal is particularly timely coming as Lithuania shipments appear to be being routinely blocked by Chinese customs. The suspicion is that the trading problems are linked to China’s objection to Lithuania allowing the establishment of a representation office for Taiwan. China has already withdrawn their ambassador to Lithuania.

In a joint statement by the EU’s High Representative Josep Borrell and Dombrovskis the EU said that it was ready to stand up against political pressure and coercive measures: “The development of China’s bilateral relations with individual EU Member States has an impact on overall EU-China relations.”

The EU is currently seeking confirmation on the compatibility of any measures it might take with WTO rules. At the same time the statement reaffirms the EU’s commitment to the ‘One China Policy’ recognizing the government of the People’s Republic of China as the sole government of China. But it added that the EU could pursue cooperation and exchanges with Taiwan in areas of common interest.

The new anti-coercion instrument, which will not be in place for some time, aims at de-escalation and discontinuation of specific coercive measures. Any countermeasures taken by the EU would be applied only as a last resort when there is no other way to address economic intimidation.

Coercion is widely understood by the Commission who say that it can take many forms and ranges from countries using explicit coercion and trade defence tools against the EU, to selective border or food safety checks on goods from a given EU country, to boycotts of goods of certain origin.

Executive Vice-President and Commissioner for Trade, Valdis Dombrovskis said: “At a time of rising geopolitical tensions, trade is increasingly being weaponized and the EU and its member states becoming targets of economic intimidation. We need the proper tools to respond. With this proposal we are sending a clear message that the EU will stand firm in defending its interests.”

If the economic intimidation does not stop immediately, the Commission claims the new instrument will allow the EU to react swiftly and effectively, providing a “tailor-made and proportional response for each situation from imposing tariffs and restricting imports from the country in question, to restrictions on services or investment or steps to limit the country's access to the EU's internal market.”

The legal basis for the new instrument would fall under the EU's Common Commercial Policy, giving the Commission more room for manoeuvre, the implementation will fall under the European Commission and decision making in Council would require a reverse qualified majority. Asked about the procedure at today’s press conference Dombrovskis said that taking decisions by qualified majority rather than unanimity will allow the Commission to take faster and more effective action.

Marek Belka MEP (S&D. PL) vice-president responsible for international trade, said: “Giving the Commission the executive power to take this decision without depending on unanimity in the Council would make the sanction mechanism a real game-changer for the EU’s foreign policy stance.”

Taking a knife to a gunfight

The anti-coercion tool doesn’t appear to present a very aggressive response to what is a real problem. The actual benefits of this new ‘tool/instrument’ are hard to envisage. While it claims to allow a rapid response, the proposed process and approach outlined do not seem to be swift and it is questionable that it will be more effective than what is already available.  It is also far from clear how it embellishes existing instruments, or is more effective than multilateral referees. Dombrovskis says that it is more defensive in nature.

The measured, deliberative and - as ever - proportional response of the EU may be frustrating to those who want the EU to be more gung ho, but a more considered and justified approach can be a more solid bulwark against attempted coercion. Whether and how this ‘tool’ will be used remains to be seen.

‘Roam like at home’ agreement to be extended to 2032

Parliament’s action for fair minimum wages in the EU