The World Economic Forum has started. I am very honoured to be invited by the Swiss-Asia Chamber of Commerce and the delegation of the Kingdom of Cambodia, to join a lunch with  Prime Minister Hun Sen, discussing on the cross country collaboration, writes Dr Ying Zhang, Associate Dean and Professor on Entrepreneurship and Innovation at Rotterdam School of Management, Erasmus University Rotterdam. 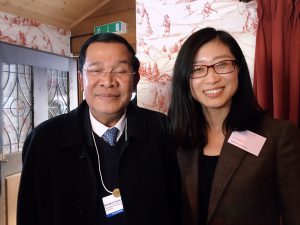 The impression of the Cambodia delegates is their professionalism and economic ambition to create wealth and value for their citizens. Almost all the ministers can speak fluent English, freely discuss with attendants, each one embracing highly esteemed education on politics and economics, and all of them are very open-minded and highly capable of understanding economic development models and issues of micro-level collaborations.

Something impressed me further is their endeavour to bring their country from 200 dollars per capita to 1,200 dollars per capita within 10 years, and promising high speed growth (7.7% GDP) with economic openness. Cambodia as a member of many geo-economic clubs such as ASEAN or ASEAN-4 or ASEAN-6 and many others, presented their smart road map on an economic strategy to attract FDI to invest, contribute to the ASEAN economic community and projects to form a single market by using a collective trade repository to deposit all trade and customs-related regulations and procedures and remove barriers to trade for economic openness.

Along with the uneasiness of many countries about the most recent changes in the world's economy and political imbalance, it seems that the sphere of the developed economies are struggling on economic and political growth, and are being pushed backwards to fight for the theme of protectionism or openness, while in another sphere of the world, the emerging economies are discussing how to be more open and more energetic to grow. This might be ironic but it does reveal a fundamental weakness in designing economic growth. What do we fear all the time from other economic powers? What defines the economic strength of a country? And what's there for our citizens' well-being? When an economy has quickly moved from a low income level to high or middle incomes and faced a transition to an advanced society, what should we pay more attention to? What lessons must we learn from the different stages of economic powers?

With the merit of equal wellbeing, what growth model (not only the economic growth model) shall we scholars propose to different markets? There are many to discuss but one lesson we must learn: extraordinary economic growth, if in terms of the current economic growth index/measure and capitalism-oriented democracy, would most probably create an unequal society. If without a proper equality based social-economic structure to implement economic growth strategies, a sense of insecurity from citizens would emerge, and in the end the instrument (for example globalization and openness) of the object (such as economic growth) would become an excuse to complain of sluggish economic growth and drag back the mentality of openness and globalization, thus bringing protectionism on board in some countries.

I believe Cambodia, under the leadership of a team of great people and as a country with Buddhism as itscentral religion and the population composition advantage (more than 50% of the population are young), will learn lessons from others and take seriously the consideration of an equality-based growth mentality and head towards the goal of achieving individual comprehensive wellbeing.