Today (4 July), MEPs adopted new tax transparency rules for multi-national companies – so-called country-by-country-reporting (CbCR). Liberals and Democrats in the European Parliament welcome the approval of today’s well-balanced compromise, which the ALDE group has long been fighting for. It will ensure tax transparency, while securing the competitiveness of European companies.

ALDE Shadow Rapporteur and Coordinator of the Legal Affairs Committee Jean-Marie Cavada said: “It was clear that we have to respond to recent tax avoidance scandals like Lux Leaks or Panama Papers; practices like these must urgently be put to an end. Today, we have called for detailed reporting of where in the world taxes are paid, by the big multinationals that operate in Europe. At the same time we must not put our companies in Europe at a competitive disadvantage. With the compromise we have now, we secure both – transparency as well as competitiveness."

ALDE Shadow Rapporteur and Coordinator in the Economic and Monetary Affairs Committee Ramon Tremosa i Balcells added: "We have long been advocating for greater transparency, especially when it comes to tax transparency. True liberalism goes against crony capitalism. Having more transparent multinationals is first and foremost about building a healthier and accountable democracy.”

Greens/EFA Shadow Rapporteur in the European Parliament's Economic and Monetary Affairs Committee Ernest Urtasun said: "After years of campaigning, this is a big victory for all those that have worked hard for tax justice. The case for greater tax transparency is unanswerable. If the EU is serious about cracking down on hidden and unscrupulous tax deals, it needs to end the secrecy that allows these practices to flourish. Public country-by-country reporting will make it much harder for multinational corporations to shop around for the lowest possible tax rate, and help bring illegal activity to light. That means more money for national governments to invest in their people, and a greater sense of fairness in how we tax profits across the EU.

"Big corporations have already shown themselves to be highly adept at seeking out loopholes. It is a shame that so many MEPs chose today to make their life that much easier. The so-called safeguard clause could lead to companies being able to keep their financial arrangements in the dark, stopping country-by-country reporting from fulfilling its promise."

Today’s voted text requires multinationals to publish, for each country where they are established, their assets and taxable income in that country, the amount of tax paid, and the number of employees, among other things. The text foresees only a limited and temporary derogation for companies to allow them to avoid disclosing publicly sensitive information. Only sensitive information may not be disclosed, so no company will get a total exemption. After one year, this derogation must be reviewed. The European Commission ensure that these derogations are not excessively granted.

#Ukraine: 'By easing trade we support a pro-European Ukraine' 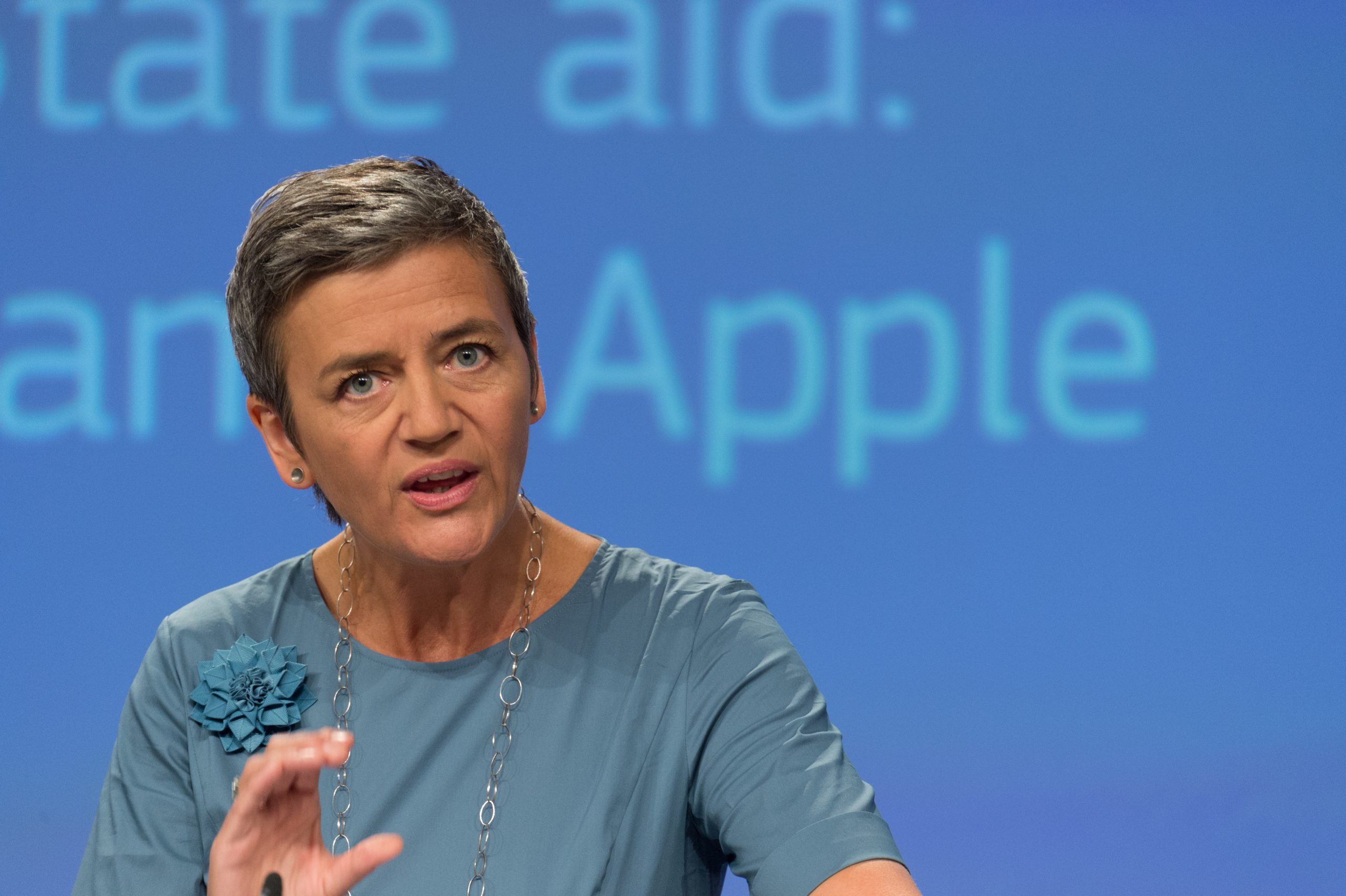 The European Commission will appeal the European Court of Justice judgment which annulled their decision of August 2016 on Apple’s receipt of what they consider to be illegal state aid granted by Ireland in the form of selective tax breaks.

The case turns on the critical question of the EU’s competency in tax matters that are usually jealously guarded by member states. The European Commission considers that in its judgment the General Court has made a number of errors of law.

The Commission reiterates that this is not a question of determining an EU countries tax policy, it is principally a question of selective advantage: “If member states give certain multinational companies tax advantages not available to their rivals, this harms fair competition in the European Union in breach of state aid rules.”

The Commission says that they have to use all tools at their disposal to ensure companies pay their fair share of tax. In her statement, Commissioner and now Executive Vice President Margrethe Vestager (pictured) makes a clear link between the Apple case and fair taxation in general, stating that the unfair system deprives national treasuries of revenue: “The public purse and citizens are deprived of funds for much-needed investments – the need for which is even more acute now to support Europe's economic recovery.”

Vestager also says that the EU needs to continue its efforts to put in place the right legislation to address loopholes and ensure transparency, and touches on the wider issue of a level-playing field for businesses: “There's more work ahead – including to make sure that all businesses, including digital ones, pay their fair share of tax where it is rightfully due.”

Ireland contends that no state aid was granted to Apple

Ireland’s Minister for Finance and Chair of the Eurogroup, Paschal Donohoe noted the Commission statement and said: “Ireland has always contended, that no State aid was given and that the Irish branches of the relevant Apple companies paid the full amount of tax due in accordance with the law. An appeal to the CJEU must be on a point, or points, of law.”

“Ireland has always been clear that the correct amount of Irish tax was paid and that Ireland provided no state aid to Apple. Ireland appealed the Commission Decision on that basis and the judgement from the General Court of the European Union vindicates this stance.”

Donohoe estimates that the appeal process could take up to two years to complete. In the meantime funds in Escrow will only be released when there has been a final determination in the European Courts on the validity of the Commission’s Decision.

Paul Tang was elected by acclamation on Wednesday (23 September) to be the chairman of Parliament’s newly created subcommittee on tax matters (FISC).

Tang (S&D, NL) was elected at the opening of the subcommittee’s constitutive meeting on Wednesday morning.

After his election, Tang said: ‘‘The European Parliament’s efforts in fighting for tax justice have today reached the next level with the launch of the new subcommittee on tax matters. I am proud to have been elected as its first Chairperson and will do my utmost to put tax justice at the top of the House’s agenda.

“Each year an estimated EUR 1 trillion in tax revenue is lost to tax dodging. This incomprehensible sum of money is unjustly diverted away from essential investments in education, healthcare, critical infrastructure, law and order, and so many other areas crucial for a society to thrive. Especially in the context of the covid19-crisis, these foregone revenues are no longer acceptable. Moreover, tax competition and tax evasion have led to a growing gap between the world’s wealthiest and the rest. And history shows us that when inequalities spiral out of control, resentment and social instability follow.

“We need to end current levels of tax dodging to shape society according to the wishes of our citizens and regain public trust in our democracies. That includes actively opposing tax havens within the European Union. We also need to make taxation a force for the transition towards a sustainable European economy. By making polluters pay for the damage they do to our society, we can pave the way for the European Green Deal to become a reality.

“The subcommittee will provide a permanent forum within which to address the complex topic of taxation. We will shed light on the practices that cannot bear the light of day, put pressure on those not implementing agreed legislation and push for a fair and sustainable European tax system.

“We can change the status quo. It will be a tough fight to ensure that huge corporations and high-fortune individuals contribute more fairly to the society and systems they themselves ultimately depend on. But it is a fight the subcommittee is ready to take on.’’

The first regular meeting of the subcommittee will be today (24 September) (from 10h15 to 11h15) during which MEPs will quiz Commissioner Paolo Gentiloni, who is responsible for taxation.

Paul Tang started advocating for tax reforms as member of the Dutch parliament starting in 2007, and throughout the financial crisis.

Upon his election to the European Parliament in 2014, he continued his focus on tax justice. He was rapporteur on the Digital Services Tax and the Common Corporate Tax Base for which he toured Member State capitals to discuss necessary tax reforms. In 2019 Paul Tang was the driving force behind the European Parliament's designation of Cyprus, Ireland, Luxembourg, Malta and the Netherlands as corporate tax havens as part of the EP's special committee's (TAX3) report.

The subcommittee on tax matters was given the green light by the plenary in June. It will be composed of 30 members and its mandate instructs it to deal primarily with the fight against tax fraud, tax evasion and tax avoidance, as well as financial transparency for taxation purposes.  Before the establishment of the subcommittee, the EP had a number of special committees looking into specific aspects of tax evasion and avoidance, moneylaundering, and other financial crimes.

There are currently two other subcommittees, that of Human Rights and that of Security and Defence, both under the EP’s Foreign Affairs Committee.

Commission recommends restricting aid to companies with links to #TaxHavens

The European Commission has recommended that member states do not grant financial support to companies with links to countries that are on the EU's list of non-co-operative tax jurisdictions. The list does not include the EU's own tax havens.

Restrictions could also apply to companies that have been convicted of serious financial crimes, including, among others, financial fraud, corruption, non-payment of tax and social security obligations.

The aim of the Commission's recommendation is to provide guidance to member states on how to set conditions to financial support that prevent the misuse of public funds and to strengthen safeguards against tax abuse throughout the EU, in line with EU laws.

Executive Vice President Margrethe Vestager, in charge of competition policy, said: "We are in an unprecedented situation where exceptional volumes of state aid are granted to undertakings in the context of the coronavirus outbreak. Especially in this context, it is not acceptable that companies benefiting from public support engage in tax avoidance practices involving tax havens. This would be an abuse of national and EU budgets, at the expense of taxpayers and social security systems. Together with member states, we want to make sure that this does not happen.”

Economy Commissioner Paolo Gentiloni said: “Fairness and solidarity lie at the heart of the EU's recovery efforts. We are all in this crisis together and everyone must pay their fair share of tax so that we can support and not undermine our collective efforts to recover. Those who deliberately bypass tax rules or engage in criminal activity should not benefit from the systems they are trying to circumvent. We must protect our public funds, so that they can truly support honest taxpayers across the EU.”

In a cross-party report on financial crimes, tax avoidance and tax planning that received overwhelming support in the European Parliament (505 votes in favour) MEPs argued that Cyprus, Ireland, Luxembourg, Malta and the Netherlands should be considered corporate tax havens.