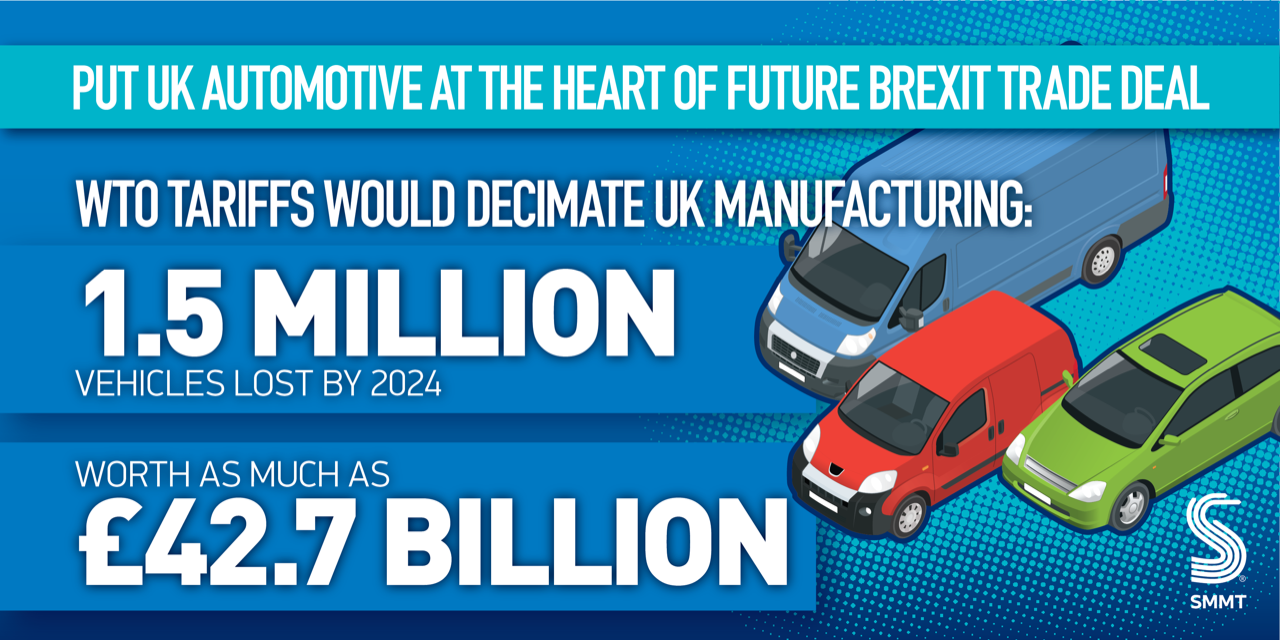 The Society of Motor Manufacturers and Traders (SMMT) has urged all parties to put UK Automotive at the heart of their economic and trade policies. Setting out the industry’s priorities for a new government, the trade body called for an ambitious, world-beating Brexit trade deal to maintain the sector’s competitiveness and ability to deliver innovation, productivity and prosperity for Britain.

Speaking at the 103rd SMMT Annual Dinner in London, SMMT President George Gillespie outlined the industry’s vision for a better, safer and cleaner future, saying: "The automotive sector is going through a period of unprecedented change and we must not let the pressure of Brexit deflect from our focus on a coherent national industrial strategy. Collaboration between industry and government must be stronger than ever… We want to work closely with the next government, as we have in the past; united in a common purpose to keep UK Automotive a global player that drives employment, creates wealth and gives all of us pride in what we can do here."

He spoke as SMMT revealed new figures showing the devastating impact of Brexit without an ambitious trade deal. Independent research commissioned by the trade body shows WTO tariffs on imported components and exported vehicles would add more than £3.2 billion a year to UK automotive manufacturing costs.2 Such a colossal increase – equivalent to almost 90% of the sector’s annual spend on R&D – could not be absorbed, forcing prices to rise and global demand to shrink. At a time when additional investment in ever safer, cleaner and more intelligent mobility technology is essential, this would be a tragic waste. 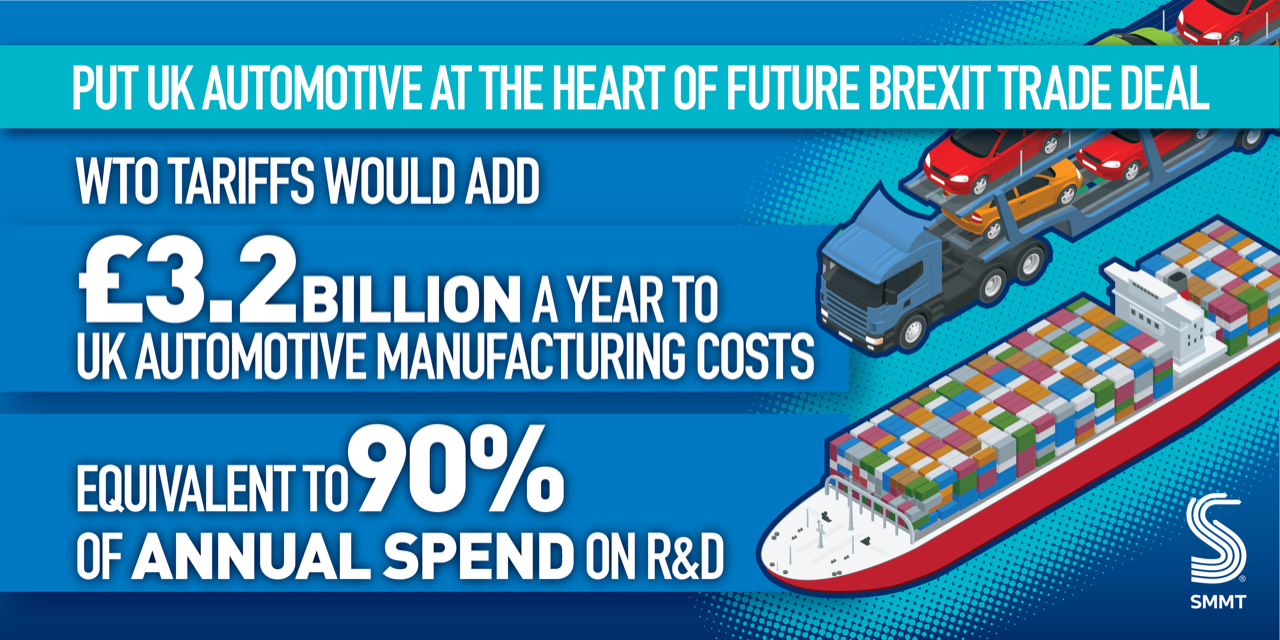 The analysis estimates the impact of such tariffs could result in the cumulative loss of more than 1.5 million units from UK production volumes over the next five years, worth some £42.7 billion at factory gate prices. Under this scenario, by 2024, falling demand and model reallocation to more competitive and welcoming production locations would see annual output falling to just 1 million vehicles per year.

Automotive is one of the UK’s most valuable economic assets, exporting more goods than any other sector to over 160 countries worldwide. The manufacturing sector is directly responsible for putting food on the tables of 168,000 British workers and their families. The sector provides high value, highly skilled jobs right across the country, with wages typically 21% higher than the UK average. 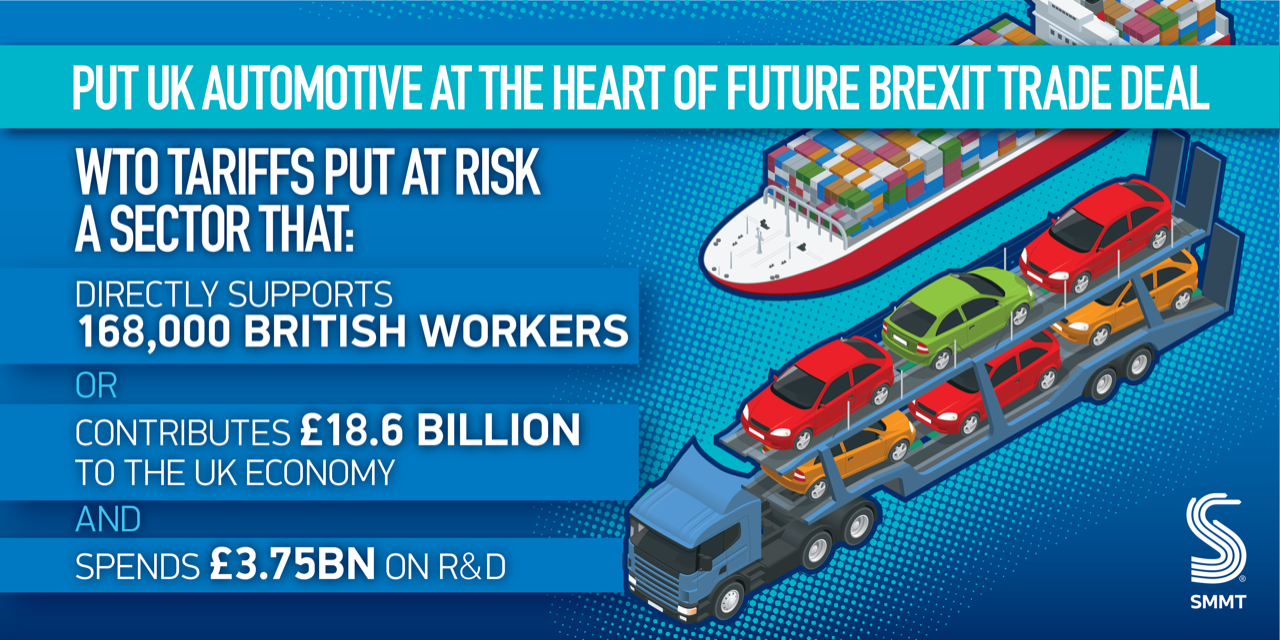 In addition, with its annual economic contribution of £18.6 billion, the sector contributes enough to the economy to pay for the salaries of England’s NHS nurses twice over, or the entire NHS spend on medicines.3 Leaving the EU without an ambitious deal that eliminates tariffs, delivers frictionless trade, maintains regulatory alignment and secures access to talent from across the globe would jeopardise this contribution, causing serious economic damage and putting thousands of jobs and progress at risk.

Mike Hawes, SMMT chief executive, said: "UK Automotive’s needs are clear: frictionless trade free of tariffs, with regulatory alignment and continued access to talent. Detailed trade negotiations have yet to begin. They will be complex and they will take time. But a close trading relationship is essential to unlock investment so we can deliver our goals: cleaner air, zero carbon emissions, and the ability to go on building our products and marketing them globally."

Rather than producing two million cars a year by 2020, a no trade deal, WTO tariff worst case scenario could see us making just a million. The next government must deliver the ambition, the competitive business environment and the commitment needed to keep automotive in Britain.

Over the past decade, thanks to massive investment and collaboration with governments through a comprehensive industrial strategy, UK Automotive has undergone tremendous growth. It is globally competitive and a hotbed of innovation, providing the platform from which the industry can develop, manufacture and deploy electrified, connected and autonomous vehicles – with a £62 billion economic opportunity up for grabs if it succeeds.4

To realise this potential, however, sustained government support will be vital, starting with an ambitious Brexit deal, and including a long-term commitment to secure giga-scale battery manufacturing investment and to bolster the market for ultra low and zero emission vehicles through substantial incentives and infrastructure spending. 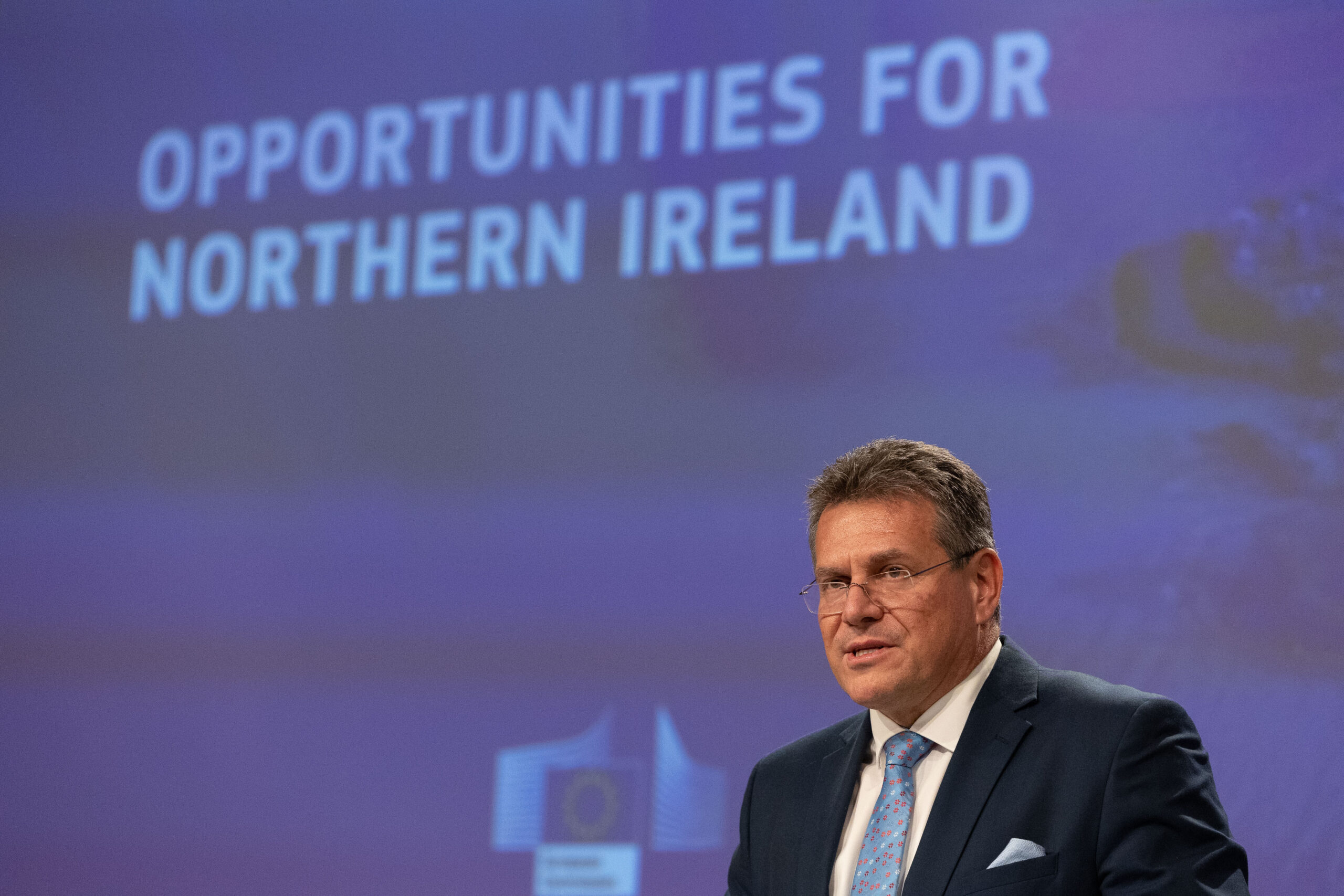 In a statement following today’s (19 November) meeting, European Commission Vice-President Maroš Šefčovič reiterated the need “to shift into a result-oriented mode and to deliver on the issues raised by Northern Irish stakeholders”.

Šefčovič said that it was essential that the change of tone from the UK-side, which was welcomed last week, “now leads to joint tangible solutions in the framework of the Protocol”. He stressed that progress was needed and that it was a test of political goodwill on the UK-side.

The Vice President said that there had been “initial useful engagement at a technical level” on customs, but “urge” the UK government to make a clear move towards the EU in the area of sanitary and phytosanitary controls to reciprocate the big move made by the EU.

The UK’s minister Lord Frost said significant gaps remained and while failing to meet the EU’s efforts to materially ease practical problems, continued to threaten to trigger Article 16 of the Ireland/Northern Ireland Protocol, “in order to meet its responsibilities to the people of Northern Ireland.”

Earlier in the day Šefčovič addressed Dublin City University's Brexit Institute, in his speech he said that the Withdrawal Agreement, which includes the Northern Ireland Protocol, was a pre-condition for the Trade and Co-operation Agreement reached in 2020: "The two agreements are intrinsically linked – one cannot exist without the other."

With the exception of the Democratic Unionist Party (DUP), no significant Northern Irish political party is seeking the collapse of the Northern Ireland Assembly on this issue. The leader of the other major unionist party, the Ulster Unionist Party (UUP) Doug Beattie has said that the issues linked to the protocol should be dealt with through negotiation.

The European Commission's efforts have also been welcomed by the non-aligned Alliance Party and nationalist parties (Sinn Fein and the SDLP), yesterday MP's from the UK's Northern Ireland Select Committee met with MEPs on the European Parliament's EU-UK co-ordination group.

Šefčovič welcomes change of tone from UK side 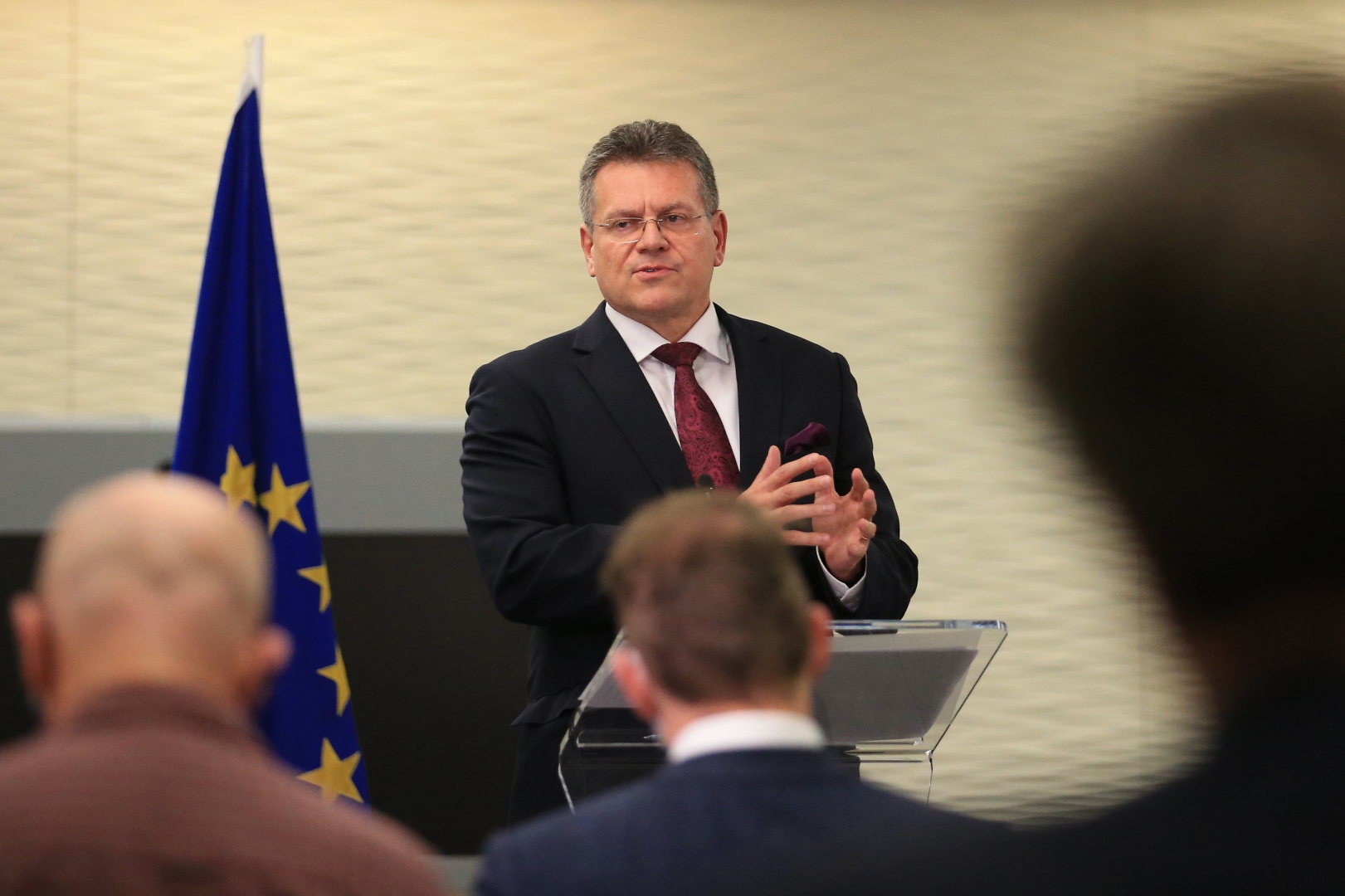 After a further week of discussions, European Commission Vice President Maroš Šefčovič welcomed the change in tone from the UK side following his meeting with the UK’s minister with responsibility of relations with the EU, Lord Frost.

Šefčovič said that next week a laser-like focus would be given to the question of medicines and the other practical issues that have been highlighted by Northern Irish stakeholders.

He said: “My message has been clear and consistent – the European Union is committed to finding practical solutions for the people and stakeholders in Northern Ireland; our package is a direct response to concerns they raised and makes a tangible difference.”

Šefčovič says that the EU now expects to reciprocate the EU’s efforts, preserving stability and predictability to Northern Ireland, “a key ingredient for the local economy to flourish”. So that the enhanced opportunities that the Protocol and the EU's package provide are realized.

Lord Frost issued a statement after the meeting saying that it was the UK’s preference to find a consensual way forward. Nevertheless, Frost maintained his threat of using Article 16 safeguards, all be it cushioned as “a legitimate part of the Protocol’s provisions”. 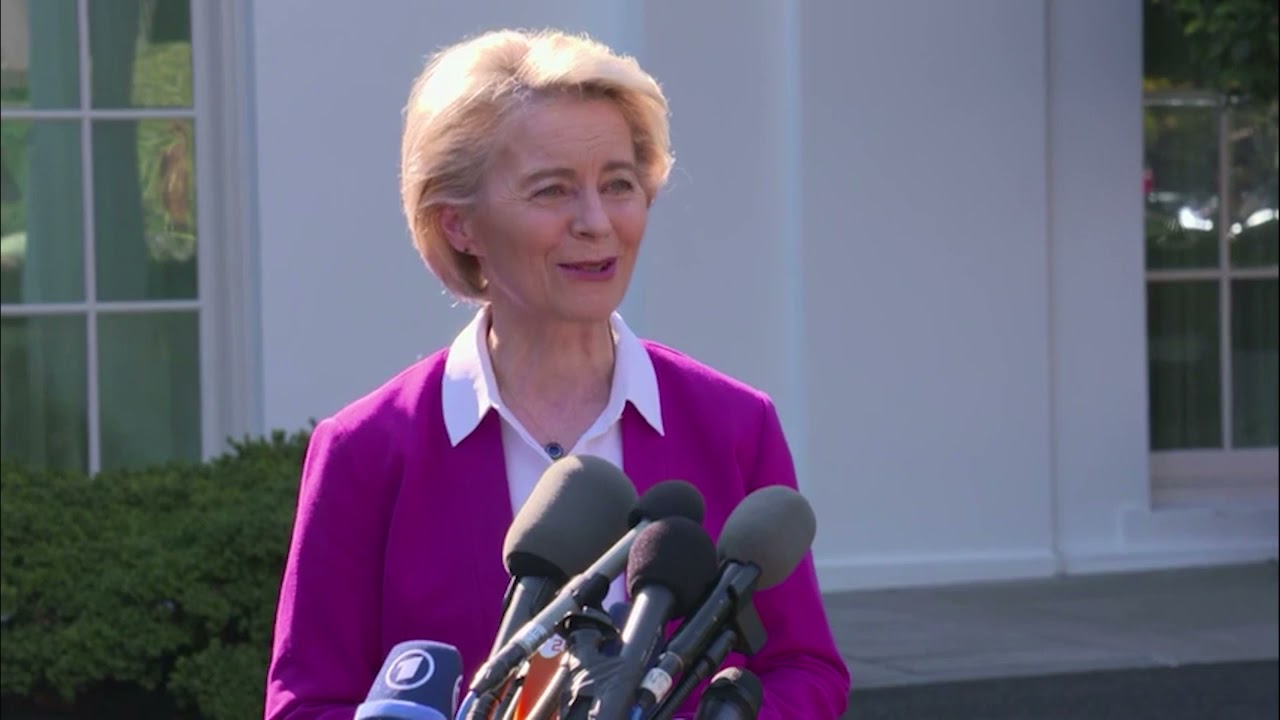 Today (10 November), the President of the European Commission Ursula von der Leyen met with United States President Joe Biden in the White House where a number of pressing issues were discussed from the situation with Belarus to Ukraine, but the leaders also spoke about the current problems with the UK reneging on its commitments made in the Northern Ireland Protocol.

“President Biden and I, we share the assessment that it is important for peace and stability on the island of Ireland to keep the withdrawal agreement and to stick to the protocol.”

The meeting takes place a day after senior U.S. representatives from influential committees issued a statement on the “UK’s threat to invoke Article 16 of the Northern Ireland Protocol.

“The Northern Ireland Protocol was a significant achievement during the volatile Brexit process, and its full implementation is critical for ensuring Brexit doesn’t undermine decades of progress toward peace on the island of Ireland.

“The Good Friday Agreement and broader peace process took patience and time to build, with good faith contributions from the communities in Northern Ireland, the United States, the United Kingdom, Ireland, and others. However, peace can unravel quickly.

Speaking in the House of Lords today, Lord Frost said that the Commission’s package of proposals to address some business and stakeholder concerns were “worth discussing”.

Frost said that talks were underway to discuss other important questions “such as the interlinked issues of the imposition of EU law and the Court of Justice, state aid, VAT, goods standards, and so on.”

The government, according to Frost, has not yet given up on the process but in due course could use safeguarding measures allowed under Article 16 of the Protocol. Frost reassured peers that if Article 16 were to be used, the government would set out its case “with confidence and spell out why it was wholly consistent with our legal obligations.” Frost also said that the EU “suggests that we can only take that action at the price of massive and disproportionate retaliation.”

In response to Frost’s statement, Baroness Chapman of Darlington said: “Central to this are the people and communities of Northern Ireland. The evidence increasingly shows that they want a deal between the EU and UK, not another stand-off, with all the uncertainty that that brings. The respected Liverpool Institute for Irish Studies found that people of Northern Ireland oppose the use of Article 16 and instead want solutions [...].

“It is time for the Minister to show some responsibility. He should work constructively with the EU to find solutions, and then, if he still can, given everything that has happened, he must play an active role in rebuilding support and trust among all communities in Northern Ireland.”