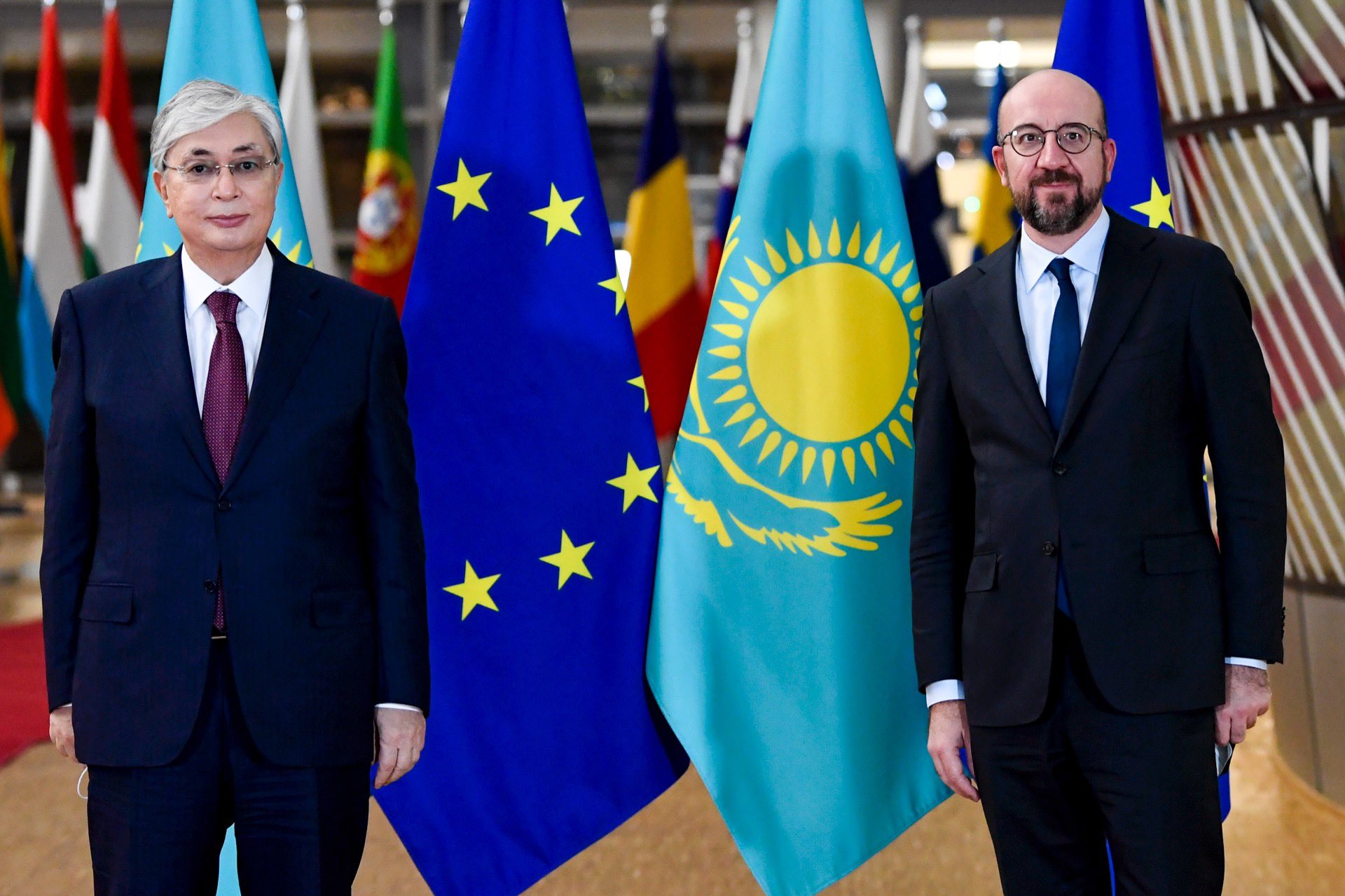 The prospects for ever closer cooperation between the EU and Kazakhstan will be high on the agenda of a top level meeting in Brussels otoday ( Friday 26th November). The President of Kazakhstan, Kassym-Jomart Tokayev, will continue his visit to Brussels with further meetings with EU leaders.

His visit coincides with 30 years of Kazakhstan independence and the two sides are keen to discuss the prospects for future EU-Kazakhstan cooperation.

Tokayev has recently spoken of Kazakhstan taking a leadership role in Central Asia. But he is also focused on increasing Kazakhstan’s economic ties within the  EU and he is likely to use the two-day trip to the Belgian capital to further support his goals of increased diplomacy and economic links.

On Thursday, President Tokayev met with EU leaders, including council president Charles Michel, and Belgian leadership.He is also due to meet with business representatives from EU countries.

The visit is timely as it is taking place during the year of the country’s 30’s anniversary of independence.

Since its independence on 16 December 1991, the country has benefited from significant economic and social developments as well as an expansion of its relationships with international partners such as the EU. Since the establishment of their bilateral relations in 1992, the EU-Kazakhstan partnership has evolved considerably, now including several formats of cooperation and dialogues across a range of topics such as the green economy, human rights, judicial reforms, trade, FDI, culture and education.

All these are up for discussion during the president’s visit this week.

Trade will be a key issue with the EU now being Kazakhstan’s largest economic partner, representing 41% of its external trade and 30% of its total trade in goods.

A Commission source said the EU has “welcomed” the progress made in Kazakhstan’s development while “seeking to continuously exchange ideas and values for further socioeconomic enhancement.”

This comes, said the source, under the framework of the EU’s Strategy for Central Asia and the EU-Kazakhstan Enhanced Partnership and Cooperation Agreement (EPCA) which entered into force in 2020.

The two sides hope the talks in Brussels will allow the scope of cooperation and dialogue to deepen and widen over the next couple of years. While post-pandemic recovery will be at the forefront of their relations between, trade and investment opportunities, climate change, energy, connectivity, and digitalisation will also be prominent in the discussions, which conclude later on Friday.

Topics being discussed in the course of the President’s visit include current Kazakhstan-Belgian and Kazakhstan-EU relations, as well as cooperation at regional and international levels

The commission source said, “The various sides will also explore how to further deepen their partnership in a range of fields, including trade and investments, climate, green developments and environment, transport and energy and digitilisation.”

Human rights is also on the agenda and Tokayev has been credited with implementing several human rights reforms,

The EU has backed economic development in Kazakhstan in the past and the EU is expected to continue to be a partner, provided it gets assurances on human rights.

Brussels has acknowledged Kazakhstan’s progress in implementing political reforms in the sphere of democracy and protection of human rights and, to promote civil society engagement, Kazakhstan recently hosted the EU-Central Asia Civil Society Forum in Almaty which gathered nearly 300 representatives from civil society and governments and focused on promoting efforts towards a sustainable post-COVID recovery in the Central Asia region.

Business and trade are also high on the agenda of the president’s packed programmed this week.

Both Kazakhstan and the EU have previously expressed their commitment to the fight against climate change – another key issue for the leaders in their talks -  and to increasing the efforts towards the effective implementation of the Paris Climate Agreement.

President Tokayev made a commitment to achieve full decarbonisation of Kazakhstan’s economy by 2060 and to boost the share of renewable energy sources in the country’s energy mix to 15% by 2030.

He will also discuss transport and energy issues with the EU before ending his visit to Brussels.

Education and culture have also featured in the discussions and a Kazakhstan source pointed out that Kazakh students are already studying at European universities and European students are studying at Kazakh universities, including in cloud computing, chemical nano-engineering, innovative medicine, and other fields.

“Over the years, Kazakhstan and the EU have continuously developed and strengthened their relationship,” he said.

As it marks its 30th anniversary of its independence in 2021, it is worth noting that Kazakhstan has achieved significant economic progress, internal stability, and has demonstrated its commitment to the rules-based international order.

Based on mutually beneficial cooperation, Kazakhstan has consolidated its position as a key partner to the EU in Central Asia.

A source at the European Institute for Asian Studies, based in Brussels, said, “A milestone in Kazakhstan-EU relations was reached when the parties signed the Enhanced Partnership and Cooperation Agreement (EPCA) in 2015, which entered into force in March 2020.

“The EPCA is the first EU agreement of its kind with a Central Asian country. This agreement sets the legal framework for cooperation in a variety of areas, ranging from promoting mutual trade, investment and infrastructure to security, culture, fighting climate change, and cooperating in the fields of education and research.”

The hope now is that the high level meeting in Brussels this week will inject fresh impetus into an already thriving partnership.