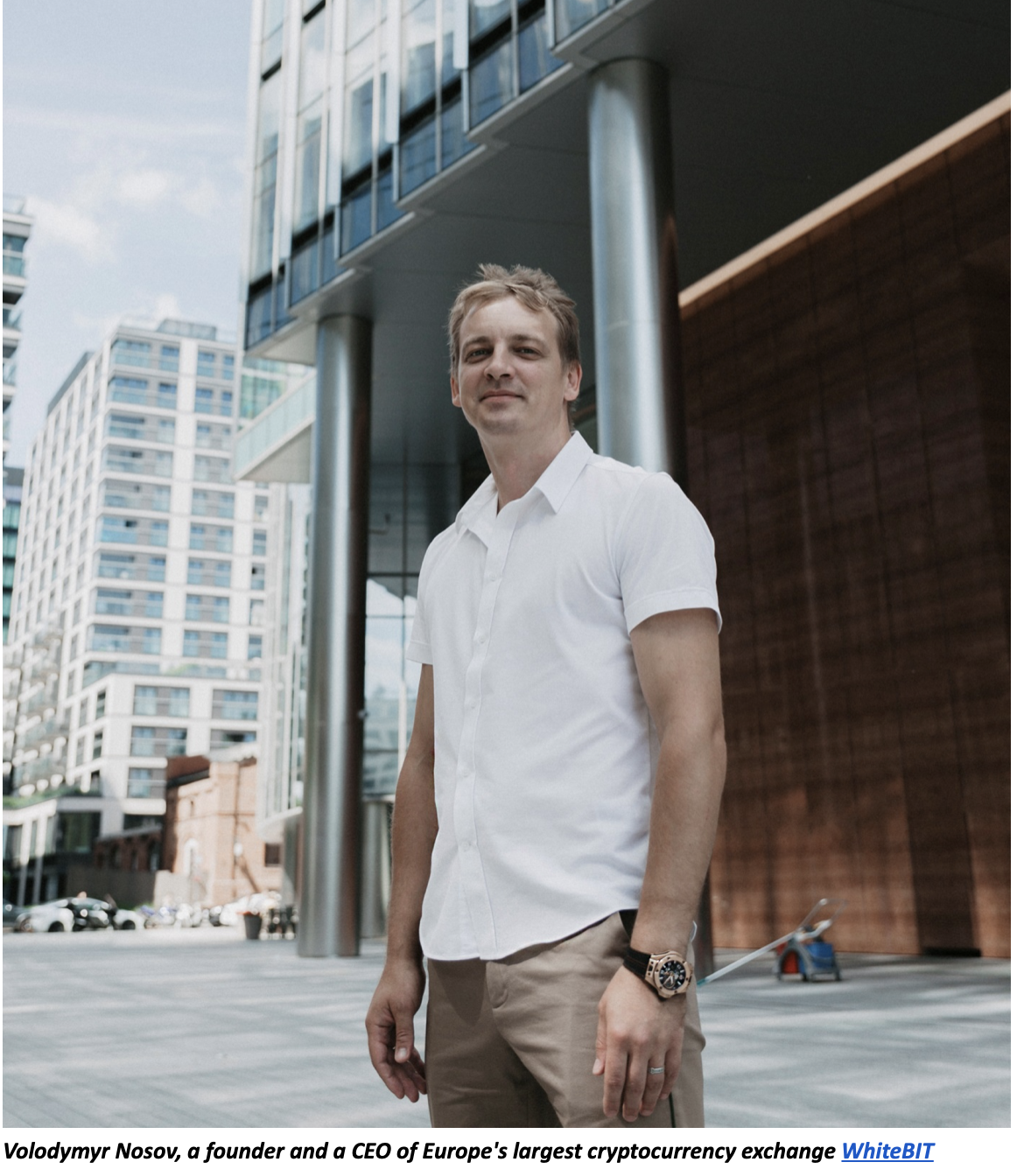 The rapid development of digital technologies, global digitalisation, the growing popularity of various payment methods, the development of meta-universes, exchange, purchase, sale of NFT-tokens, i.e. blockchain technologies, have become the new world reality: Its integral part that will determine and even already determines our future - writes Volodymyr Nosov. https://whitebit.com

I am convinced that currently blockchain technology is the last link in all the upcoming game changers of shaping the new order. The world, and life in it, has been speeded up by technology to the maximum extent possible. The point of no return has been passed. The history of human civilisation is changing dramatically. Those who understand this are adapting to the new conditions and challenges. Tomorrow they will be far ahead of the rest. Those who do not accept the change and cling to the traditional world order are slowing their own progress.

Europe fears or fails to understand?

Currently, the latter applies to Europe. In the context of technology, especially blockchain technology and cryptocurrencies, EU countries are both fundamentally conservative and aloof. Not only do they not demonstrate, but they are not even motivated to adopt new technologies.

On the one hand, this approach seems reasonable: why radically change anything if there are world's best banks operating in Europe, and there is a stable, efficient and centuries-tested financial system?

On the other hand, this position is absolutely short-sighted and not pragmatic. And pragmatism is typical for most European nations. Clearly, unless European countries perceive cryptocurrency rather as an opportunity, and not a risk, they will not support blockchain technology. And by doing so, they are slowing down their own progress. Technologically, one of the key problems of the blockchain industry in Europe is the lack of a regulatory body with unified standards for all blockchain businesses, in other words, the lack of common, clear, transparent rules for the cryptocurrency market throughout the European Union. If Europe wants to exercise the dominant power in the future, it needs to change its approach.

There is still no formally accepted legal classification of digital assets at the European Union level, so the legislation of each individual country should be considered.

In general, cryptocurrency is generally considered legal throughout the European Union, but the scope for crypto-activities, conditions, particularly taxation, varies. For example, the rate for capital gains tax from profits received from cryptocurrency can range from 0% to 50%, depending on the EU member state.

However, the exchange of traditional currency for cryptocurrency or virtual currency (and vice versa) is considered as a supply service and is VAT free in all EU countries.

The main market regulatory bodies are the European Securities and Markets Authorities (ESMA) and the European Banking Authority (EBA). But, when it comes to the currency exchange activities, many EU countries have additional requirements to ensure that exchanges are registered with the relevant regulatory bodies, such as the German Financial Supervisory Authority (BaFin), the French Autorité des Marchés Financiers (AMF) or the Italian Ministry of Finance.

That is, the very process of obtaining licenses or approvals for cryptocurrency activities in such countries is considerably more complicated. I would call it burdensome, which does not facilitate the development of the crypto segment.

In other countries, it is more lenient. Yes, Estonia, Lithuania and Spain are constantly upgrading their cryptocurrency legislation. Portugal is currently the most flexible among EU countries regarding cryptocurrency activity and benefits from it. Portugal's balanced approach to taxation and lack of restrictions for the development of cryptocurrency mining makes it a base for opening offices by a number of international financial and technology companies.

The country is attractive to crypto investors and has the potential to become a powerful technology hub in the future. This is why WhiteBIT is taking strategic steps by opening a representative office in Portugal.

Some EU states are progressive in terms of technology, in particular blockchain. Others are stuck in the jungle of the traditional financial system. The different approaches of EU countries to cryptocurrency regulation have their own risks for ordinary people who have already joined the global crypto-community.

In fact, such risks exist globally, regardless of a person's nationality or place of residence: to give a few examples: a citizen of a country where crypto-assets are regulated, taxed, perhaps even are a means of payment, arrives at a country that is less lenient in terms of crypto-assets: his or her wealth, its legality and transparency may be questioned there. Or a situation where a global, European business is forced to bypass certain disloyal cryptocurrency jurisdictions.Overall, the situation in the European Union's cryptocurrency market looks chaotic.

The EU leadership is seeking to regulate this chaos with a series of initiatives. "Great, finally!" you might say, but I would disagree.

Again, the key problem is the following: perceiving cryptocurrencies as risks rather than opportunities, Christine Lagarde, the president of the European Central Bank, believes that cryptocurrencies are "worthless, backed up with nothing, with no underlying asset to offer a security anchor". Her words represent a clear display of European understanding and attitude to modern technology.

In turn, European Central Bank board member Fabio Panetta, in his speech at Columbia University in April, said cryptocurrencies pose risks to financial stability because, according to him:a shock on the crypto market could spread to those in the broader financial system through direct asset ownership or service providers; the possible cryptocurrency collapse would be a blow to investor wealth and could trigger the domino effect; a loss of faith in the value of crypto-assets could lead to a sharp decline in overall investor confidence in the financial market.

What to do, considering the risks?

According to Panett, to avoid or limit them significantly. So, he suggests:To subject crypto-currencies to the same standards applicable to the entire financial system, including the requirements of FATF rules, KYC procedures and AML/FT (regulations should also apply to peer-to-peer transactions);to introduce proper, coordinated cross-jurisdictional taxation; to strengthen disclosure rules, including regulatory reporting; to introduce strict transparency requirements and establish conduct standards for service providers designed to protect retail investors.

I believe that any excessive regulation, even when well intentioned, could have a negative impact on the users themselves: e.g., by forcing users to reveal their data, thus exposing them to fraudsters. It certainly would not be beneficial to blockchain companies, users or EU members. Regulation is not about prohibiting or restricting, but about creating the best possible conditions for all involved. In this case, regulation is understood as development.

This is precisely what the EU's currency market needs. Presently, the general principles enabling the work of a European regulatory body are obvious. In the absence of a regulatory body itself, operational principles and entity interaction are well established and have been working in the crypto-sphere for many years now. These principles are well known and they have been formally established in numerous international normative acts. In particular, the principles of countering terrorist financing, anti-corruption, cybercrime, cross-border organised crime and money laundering are set out in the UN Conventions, UN Security Council resolutions, European Parliament and Council of Europe directives, FATF standards, Egmont Group documents, Basel, etc.

Light at the end of the tunnel

Two years ago, the European Commission drafted a new proposal known as Markets in Crypto-assets (MiCA) Regulation. This is a part of a broader legislative package for financial technology regulation, with the help of which the European Commission wants to protect investors and ensure market stability by requiring that cryptocurrencies comply with the same transparency, disclosure, licensing, compliance, authorisation and control in all 27 member states.

Among other things, it is planned to introduce a new European "passport" that would allow crypto-currency platforms and other non-EU service providers to apply for a license enabling platforms to operate in any of the 27 member states. Today, this is not possible. That approach to crypto-regulation seems more optimistic in terms of industry development within the EU.

The main advantage of MiCA is that it does not restrict the very existence or use of crypto-currency, but it does provide a framework for clear market regulation.

I want to emphasise that it is only a draft, and has not come into force. The document is "raw" and needs to be discussed and agreed upon. But in terms of development, it is strategically the right course of action. WhiteBIT was involved in the legislation development process for regulating the crypto-currency market in Ukraine, successfully passed a few months ago. Nowadays, Turkey, for example, is interested in our experiences.

We are eager to share these experiences, and are providing consultations to our Turkish partners. We are also ready to share our experiences with the European Union.

Only the global, centralised regulatory system of the European Union can overcome the development obstacles faced by modern, innovative businesses. Europe has managed to overcome the state borderlines, not only in direct but in indirect meaning as well - in the virtual space, especially since these limitations exist solely in the minds of public officials and lawmakers. Ordinary people overcame them long ago

Are cryptocurrencies about to make Fiat money obsolete?