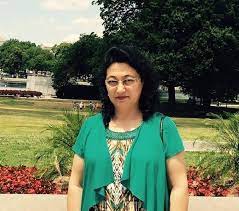 The sister of an Uyghur activist thought to be detained in a Chinese “concentration camp” has made an impassioned plea for help to release her.

Gulshan Abbas (pictured) was abducted from her home in a Chinese province in September 2018 and has not been seen since.

59-year-old retired medical doctor, is thought to have been seized by Chinese state police and taken to a “re-education camp” along with up to 3m other Uyghur people.

Her sister Rushan, an American Uyghur activist, has embarked on a worldwide initiative to make the public and authorities aware of her plight and, on Tuesday, appeared at an event in Brussels designed to win support for her sister.

Speaking to reporters, Rushan, five years younger than her sister, said, “It is time to stop this genocide of my people.”

She added,”I have no information about my sister or her health. I just want to know she is alive and to see her again.”

She and her sister featured in an 80 minute documentary that charts the efforts she’s made to win backing for her sister’s case and that of the Uyghurs.

The event was organised by European Foundation for Democracy and Campaign for Uyghurs, in cooperation with the U.S. Mission to the EU.

Filmed over a dozen countries, “In Search of My Sister” is the story of Rushan whose sister is one of 1.8-3 million Uyghurs taken by the Chinese Communist Party.

Rushan pointed out that China is accused of committing crimes against humanity and possibly genocide against the Uyghur population and other mostly-Muslim ethnic groups in the north-western region of Xinjiang.

Human rights groups believe China has detained Uyghurs against their will over the past few years in a large network of what the state calls "re-education camps", and sentenced hundreds of thousands to prison terms.

Rushan said, “These are, in fact, more like the concentration camps used by the Nazis in WW2.”

There is also evidence, she said, that Uyghurs are being used as forced labour, mass rape and of women being forcibly sterilised. Some former camp detainees have also alleged they were tortured and sexually abused, she noted.

The US, where Rushan lives with her husband, is among several countries to have accused China of committing genocide in Xinjiang. The leading human rights groups Amnesty and Human Rights Watch have published reports accusing China of crimes against humanity, the film said.

There are about 12 million Uyghurs, mostly Muslim, living in Xinjiang, which is officially known as the Xinjiang Uyghur Autonomous Region (XUAR).

The Uyghurs speak their own language, which is similar to Turkish, and see themselves as culturally and ethnically close to Central Asian nations. They make up less than half of the Xinjiang population. Recent decades have seen a mass migration of Han Chinese (China's ethnic majority) into Xinjiang, allegedly orchestrated by the state to dilute the minority population there.

China has also been accused of targeting Muslim religious figures  and banning religious practices in the region, as well as destroying mosques and tombs, said the documentary shown at the Brussels press club.

China initially denied the camps existed but later said they were vocational centres and designed to combat extremism. In late 2019, China said all people in the camps had "graduated".

Last March EU ambassadors agreed on sanctions over China’s crackdown on Uyghurs. These consist of asset freezes and travel bans. In December, an unofficial tribunal of lawyers and campaigners said Chinese President Xi Jinping bore primary responsibility for what it said was genocide, crimes against humanity and torture of Uyghurs and members of other minorities in the Xinjiang region.

Rushan has appeared at many rallies and demos, usually carrying a photo of her sister to win support for the family’s case. She said she’d done many interviews with the international media and made strenuous efforts to locate her sister including speaking to her neighbours in Urumqui,the capital of the Xinjiang Uyghur Autonomous Region in the far northwest of China where she lived.

She told the event: “What the Chinese state is doing is not that different to the Nazis, with forced labour camps. The camps look normal at first but look closer and you will see they have barbed wire and watchtowers. They even use the same slogans. Kids are being taken to orphanages where they are raised as Chinese.

“It is time to stop this holocaust of the Uyghurs and we are all responsible for what happens next.”

The film showed footage of people testifying that her sister had been abducted from her home by Chinese police.

She said: ”I have three kids from my first marriage but I see relatively little of them because I am constantly travelling in order to raise awareness of my sister.”

“I often wake in the middle of the night thinking about her and where she might be right now. whether she has sufficient clothes and food.

“But if the Chinese regime thinks that it can silence me and my criticism of what they have done to my people by taking my sister they are wrong.

“I just hope and pray that she remains strong.”

Rushan said it is now known that the Chinese state imposed a 20 year sentence on her sister for allegedly “assisting terrorist activities”.

What she calls “totally false” allegations were made in March 2019 but she only became aware of them, she said, in December 2020.

“We have seen no pictures or photos of her. We currently do not know if she is still alive or, if so, where she is.”

Marco Respinti, who runs Bitter Winter site that highlights rights abuses, said in the film, “I fully endorse what Rushan is doing in trying to highlight these crimes.”

Pressure is mounting on the EU and international community to boycott the upcoming Winter Olympics in China, due to start in a few days.

Abdulhakim Idris,speaking at the same event, likened this to the Berlin Olympics in the 1930s, saying: “It is a propaganda affair and the West should boycott it in protest at such rights abuses.”

He added that his own family members had also been taken to “concentration camps” in China, saying: “You will find that most Uyghurs know of someone who has been taken.”

Both he and his wife appealed to the EU to “do more” to intervene and put a stop to such detentions. Idris, a German national, said: “It is time that Europe and businesses in Europe stopped doing business with China. This business as usual attitude must stop. The difference between what is happening now at Nazi Germany is that the Nazis at least kept records of what they did whereas China does not.”