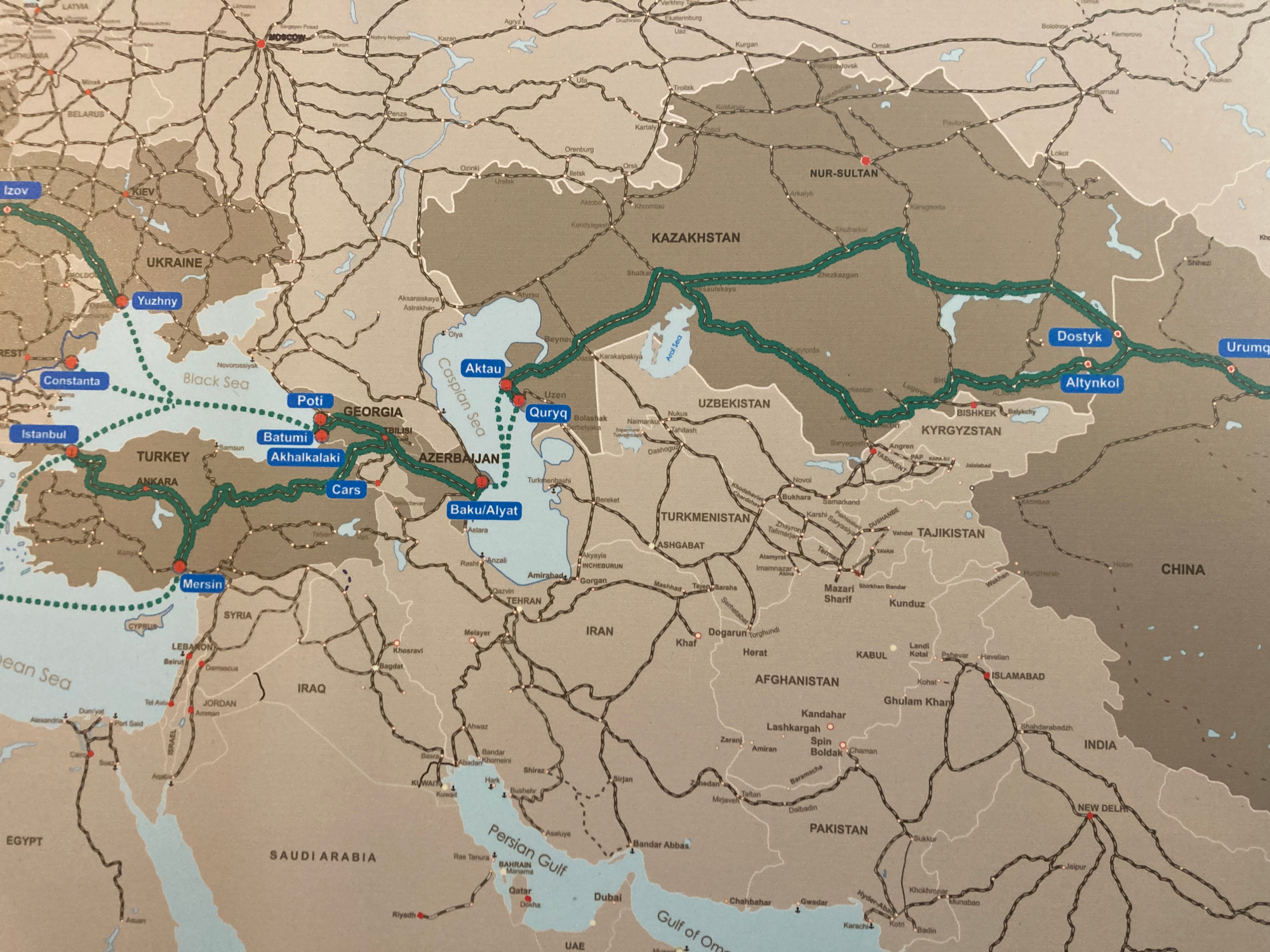 There’s rocketing demand to use the shortest trade route between China and Europe, the Middle Corridor across Kazakhstan and the Caucasus. Importers and exporters who are switching from sending their goods through Russia gathered in Brussels to hear how obstacles are being overcome, writes Political Editor Nick Powell.

What was first envisaged as a round table with about 40 guests became a major conference with many more participants as 80 businesses, transport operators and international organisations came together under the banner of ‘Transit and Transport Cooperation between Kazakhstan and the European Union: Prospects for the Development of the Middle Corridor’.

The massive interest in the trade route between Europe and China, across Kazakhstan, Azerbaijan and Georgia, stems from the collapse in traffic along the Northern Corridor through Russia, following its invasion of Ukraine. Opening the conference, Bogusław Liberadzki MEP, from the European Parliament’s Transport Committee, spoke of the need for solutions that will not block the trade of the European Union.

Kazakhstan’s Ambassador to the EU, Margulan Baimukhan, said there had been an enormous growth in container traffic through his country and that in the New Kazakhstan brought about by political reforms recently approved in a referendum,, there was a guarantee of a level playing field for all businesses trading there.

From the cabinet of the EU Transport Commissioner, Pablo Fabregas Martinez said Kazakhstan cannot be merely seen as transit country but rather as a logistical hub. It might be the biggest landlocked state in the world but “you’re not landlocked with the European Union, you’re landlinked with us”, he said.

The Deputy Chair of Kazakhstan Railways, Yerlan Koishibayev, said that being landlocked was actually a competitive advantage, due the connections with other countries. He said container traffic on Kazakh trains was growing rapidly to match the requirements of Europe and China. New rail lines were being built and existing ones electrified to encourage greater use of the greenest form of transport.

Crucial to the expansion of traffic along the Middle Corridor is ensuring efficient border crossings, especially the ferry crossing of the Caspian Sea. The Chair of the Port of Aktau, Abay Turikpenbaev, explained how paperwork delays were being eliminated by an electronic exchange of data. This involved not just the port at Baku, across the Caspian in Azerbaijan, but the ‘dry port’ of Khorgos, on the Kazakh-Chinese border where goods are switched between the two countries rail systems.

Although the most time-sensitive goods will be expensively shipped by air, rail and ferry offer significant savings in journey times compare with sea routes. It takes 35 days by sea from the Chinese port of Lianyungang to Istanbul, by rail it’s 16 days from the rail terminal that Kazakhstan has established in Lianyungang in a joint venture with China.

From the Organization for Security and Cooperation in Europe, its Senior Programme Officer, Daniel Kroos, said improving trade across the Caspian and Black Seas had already been a high priority before the recent growth in traffic on the Middle Corridor. But a natural progression had been accelerated and some steps to increase capacity, such as providing more ships, would take time. Another step forward would be the creation of a common track and trace system, using a digital platform linking different countries and organisations.

That can’t come soon enough for Marco Politi, commercial director of the Italian DBA Group, who also called for an integrated data exchange to reduce customs delays. A Venetian himself, he invoked the can-do spirit of his near namesake, Marco Polo, who pioneered the Middle Corridor with his epic journey from Venice to China in the thirteenth century.

Constitutional change in Kazakhstan and geopolitical upheaval set the scene for talks with EU.