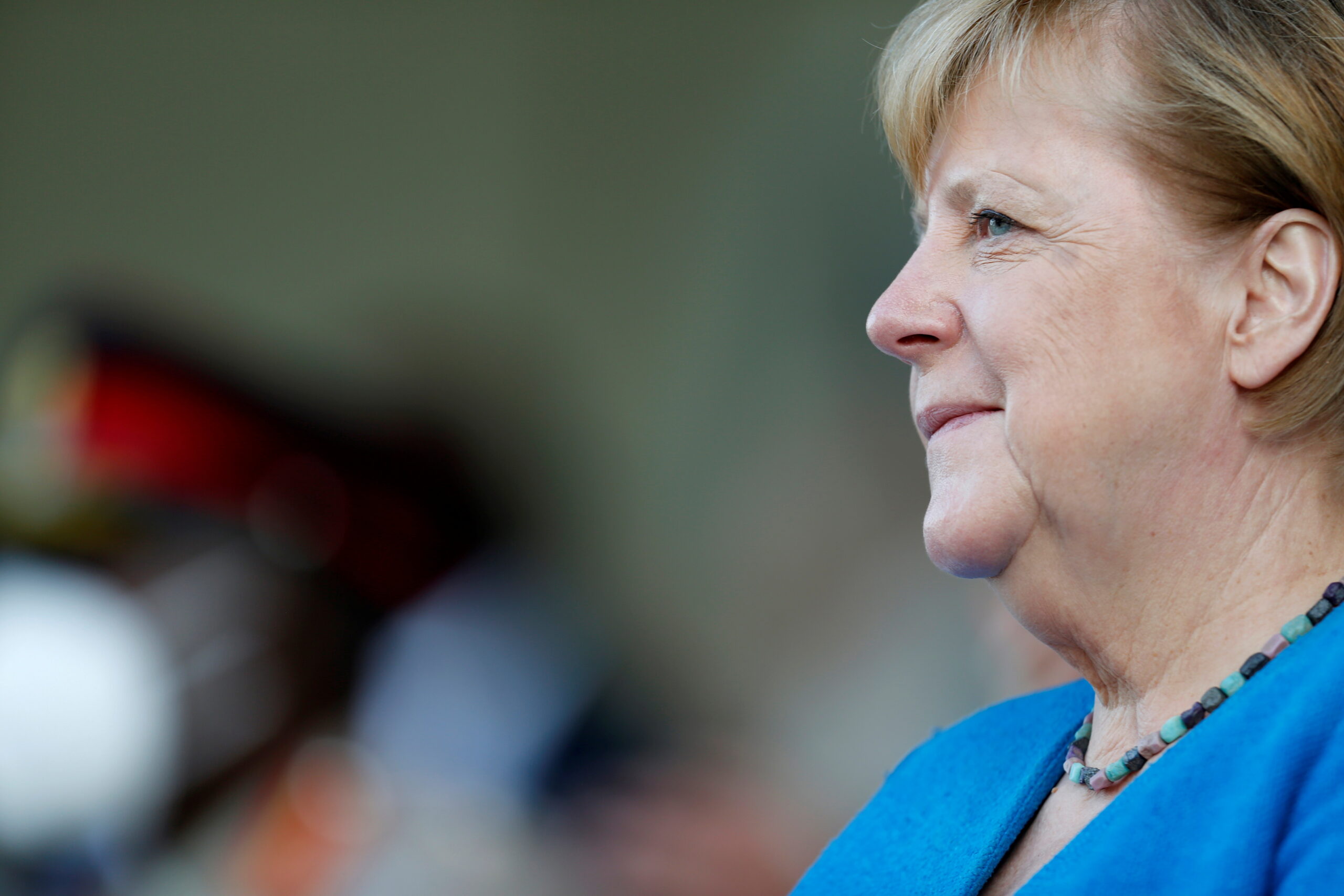 Scholz has led his party from third place a month ago to leader in one poll out on Tuesday (24 August), a remarkable turnaround for both his party and its rival conservatives, who risk losing power after four consecutive election victories under Merkel.

The Social Democratic Party's (SPD) push past the conservative CDU/CSU bloc is the first time the party has led in a Forsa poll since 2006. Scholz is also the most popular of the chancellor candidates.

The conservatives have suffered since their chancellor candidate, Armin Laschet, was seen laughing on a visit to a flood-stricken town in July - a gaffe that exacerbated party infighting and stoked lingering rivalries.

Some in the conservative CDU/CSU bloc are starting to worry.

"It is really difficult to predict the outcome of the election this time," said CDU lawmaker Mathias Middelberg.

As finance minister and vice chancellor in Merkel's awkward 'grand coalition' of the conservatives and SPD, Scholz shares the chancellor's reasoned approach and exchanges text messages with her most days.

He grew up in Hamburg, where Merkel was born, and is consciously aping her style.

Last Friday, he appeared in the Sueddeutsche Zeitung with his hands resting in the 'Merkel rhombus', her trademark pose with thumbs and fingers lightly bracing together that is and a symbol of her calm leadership.

As chancellor, Scholz could take steps towards a fiscal union in Europe, where senior SPD officials say Merkel has been too hesitant. The conservatives reject what they call a "debt union", referring to common debt issuance by European states.

But he also stands for solid finances - he wants to rein in debt spending after the pandemic - and a commitment to NATO, which implicitly rules out a so-called red-red-green alliance with the ecologists and the hard-left Linke, who believe the Western military alliance should be dissolved.

On the defensive, the conservatives have resorted to trying to poach voters from the business-friendly Free Democrats (FDP) by warning their supporters that they risk voting for an alternative left-wing coalition with the SPD and Greens.

"Those who vote FDP have to accept that they will end up waking up with Esken and Kuehnert at the cabinet table," CDU General Secretary Paul Ziemiak tweeted on Friday, with reference to two left-wing SPD members.

Not everyone is listening. In video published on Saturday that has been viewed 2 million times, Youtuber Rezo accused Laschet of "incompetence" and being "blatantly inauthentic".

"Rather, his rise is explained by the fact his chief rivals - Laschet and the Greens - have weak candidates and are making all the mistakes," he added.

Some conservatives have criticised Merkel, who plans to step down after the election, for polishing her legacy with a series of trips abroad rather than championing Laschet.

"But it is also clear: Armin has to show that he can do it on his own," a close Laschet confidante said.

Laschet allies point out that he came from behind in polls to win the premiership of North Rhine-Westphalia, Germany's most populous state, in 2017. They also believe he will do well in televised debates with Scholz and the Greens' candidate, Annalena Baerbock, later this month and next.

Baerbock too has been knocked off course after a promising start, hurt by an unreported party bonus and inaccurate details in her curriculum vitae. Her party says media have not scrutinised her male rivals as vigorously and has criticised their questions about juggling motherhood and leadership.

The conservatives last Friday dismissed suggestions they should drop Laschet and replace him with Markus Soeder, who leads the CSU, Bavarian sister party to Merkel and Laschet's Christian Democrats (CDU), and who had been sniping at Laschet.

"The CSU leader's constant needling will likely cost us 1 to 2 percent of the vote," said one CDU executive committee member.

"But at least as important is his ability to offer a credible alternative: a sense of utterly pragmatic reliability." 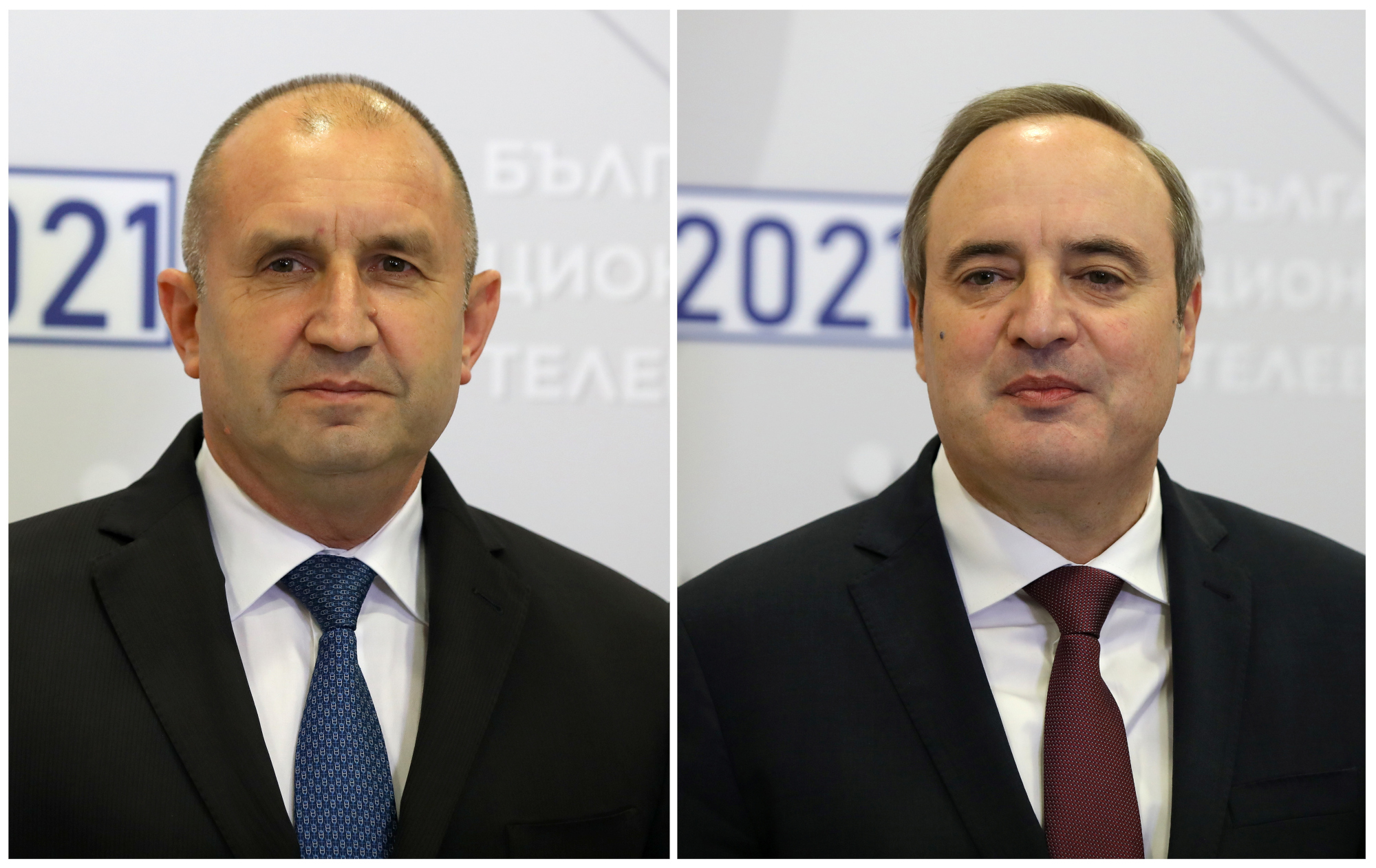 A combination picture shows incumbent President Rumen Radev and presidential candidate Anastas Gerdzhikov as they arrive at the Bulgarian National Television for an election debate ahead of the second round of the presidential election, in Sofia, Bulgaria, November 18, 2021. REUTERS/Stoyan Nenov

Bulgarians voted on Sunday (21 November) to choose the country's next president in a run-off election, weary of widespread corruption in the European Union's poorest member state amid rising energy costs and high death toll from the coronavirus, writes Tsvetelia Tsolova.

Incumbent President Rumen Radev, 58, an advocate of change aimed at cleaning Bulgaria's image as the EU's most corrupt member state, appears poised for a new 5-year term after winning 49.5% of the votes in the first round on Nov. 14.

He competes with Sofia University Rector, Anastas Gerdzhikov, 58, who won 22.8% of the vote last week and is backed by the country's towering politician of the past decade, ex-premier Boyko Borissov who was ousted from power in April.

The presidential post is largely ceremonial, but comes to prominence in times of political crisis, when the head of the state can appoint interim cabinets. The presidency also gives a high tribune to influence the public opinion.

Radev, a former air-force commander, has gained popularity for his open support of massive anti-graft protests against Borissov in 2020 and for appointing interim cabinets that brought to light murky public procurement deals of his last centre-right cabinet. Borissov has denied any wrongdoing.

A new anti-graft party, We Continue The Change (PP), set up by two Harvard-educated entrepreneurs who Radev appointed as interim ministers in May, won the parliamentary election last week. Read more.

Radev is supported by Borissov's political opponents -- PP, the Socialists and the anti-elite ITN party which, along with another anti-graft faction, are holding talks to form a government.

"Radev is a front-runner, but much will depend on whether his supporters will actually go to cast a ballot," said political analyst Daniel Smilov with Sofia-based Centre for Liberal Strategies.

Gerdzhikov, a respected Professor in Ancient and Medieval Literature, has accused Radev of pitting Bulgarians against one another and pledged to unite the nation, hit by COVID-related death rates that are among the highest in the EU and soaring energy costs.

Gerdzhikov is a strong supporter of NATO-member Bulgaria's Western alliances, and has campaigned to improve business opportunities and support judicial reforms to improve rule of law in the country of 7 million people.

Radev, who campaigned in 2016 for the lifting of Western sanctions against Russia, said Bulgaria must keep pragmatic ties with Moscow and should not view it as an enemy, not least because of close historical and cultural links.

His comments that the Crimean Peninsula, annexed by Russia from Ukraine in 2014, was "currently Russian", prompted protests from Kiyv. Read more.

The elected president takes office in January next year. 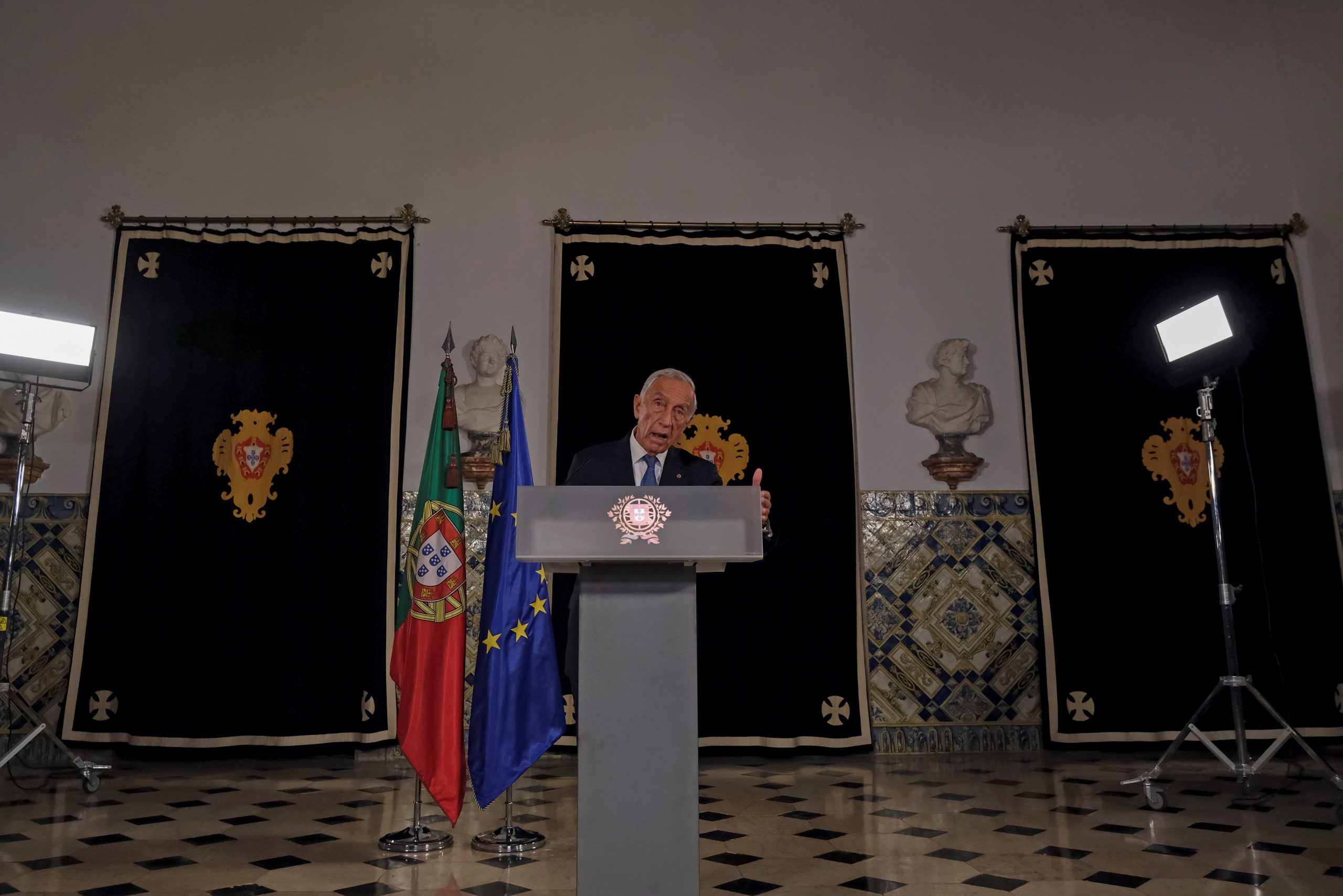 Portugal's ruling Socialists lead the race to win an election in January with more votes than they took in 2019, but short of a full majority, according to the first poll of voting intentions taken since parliament rejected their budget last week, write Andrei Khalip and Sergio Goncalves, Reuters.

The combined left, including Prime Minister Antonio Costa's former hard-left partners who helped sink the budget bill and trigger the snap election, would retain a majority of seats in parliament, taking 52% of the vote, according to the survey by Aximage pollsters.

The government is still serving in full capacity until parliament is formally dissolved.

Political analysts say an election alone might not solve the political impasse as no single party or workable alliance is likely to achieve a stable majority. Most consider the left's alliance all but impossible to rebuild due to mutual distrust.

The centre-left Socialists would garner 38.5% of the vote, about one percentage point more than in a previous poll in July, and up from 36.3% they took in the 2019 general election.

The main opposition Social Democrats were on 24.4%, falling from 25.2% in July and nearly 28% in the last election.

The Communist Party, which along with the Left Bloc was once the government's partner in parliament, would get 4.6%.

Part of the Aximage poll released on Thursday showed that 54% of respondents thought a snap election would be "bad for the country", with 68% believing that no party would win a majority of seats in parliament. 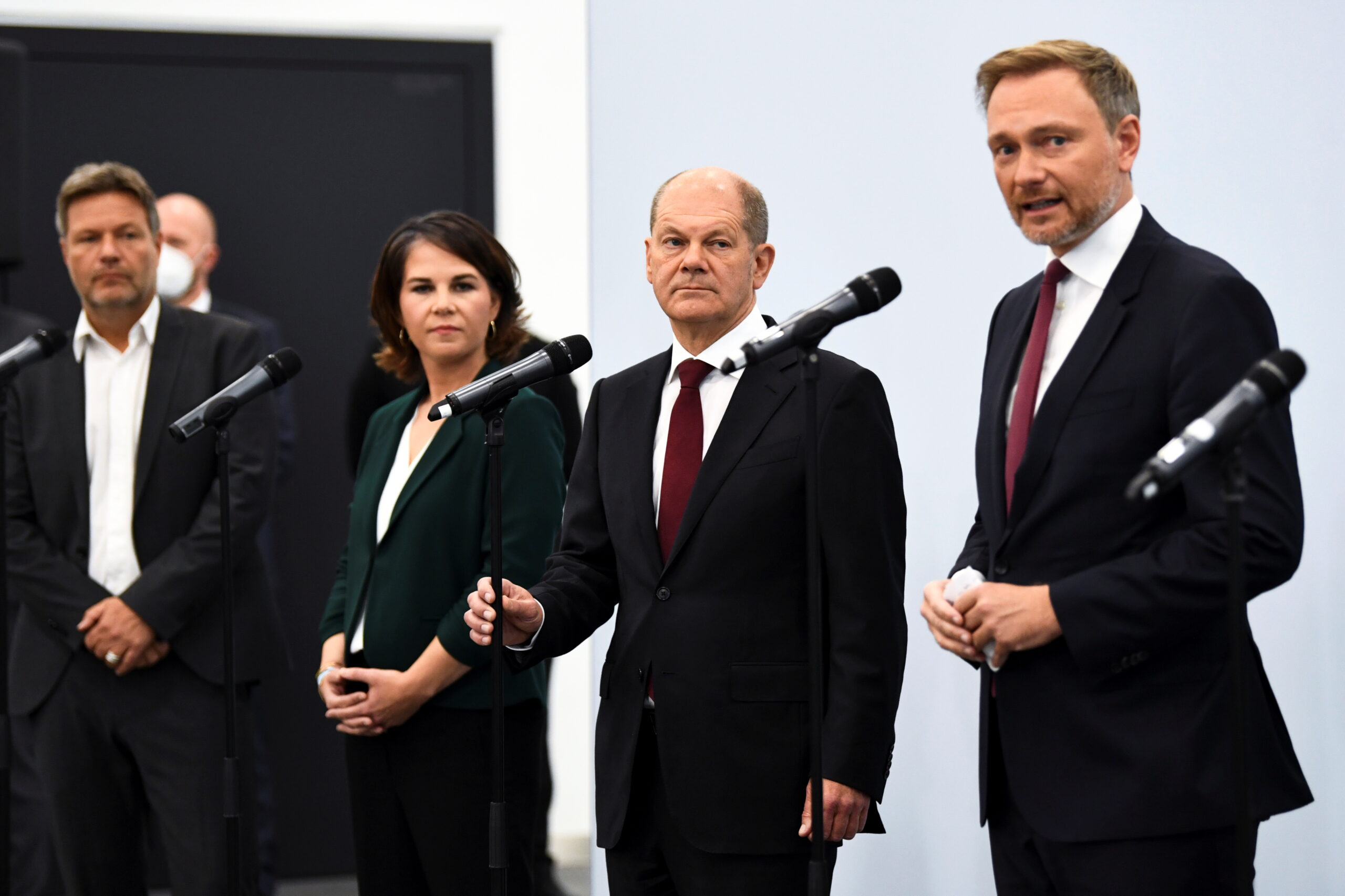 The Social Democrats, who came first in last month's election, the Greens and the business-friendly Free Democrats (FDP) said exploratory talks on whether they had enough in common to form a government together had been constructive.

"A new start is possible with the three parties coming together," Scholz told a news conference.

FDP leader Christian Lindner said the "traffic light" coalition - named after the party colors of the SPD, the FDP and the Greens - was an "opportunity".

"If such different parties could agree on joint challenges and solutions, then that would be an opportunity to unite our country," he said, "a chance that a possible coalition could be greater than the sum of its parts."

This would be the first time such a "traffic light" coalition governed at a federal level and would put an end to 16 years of rule by the conservatives under Chancellor Angela Merkel.

"We are now convinced there has not been an opportunity like this to modernize society, the economy and the government for a very long time," Lindner told the news conference.

All three parties are expected to deliver a decision today (18 October) on whether or not to go forward with the talks, Scholz said.