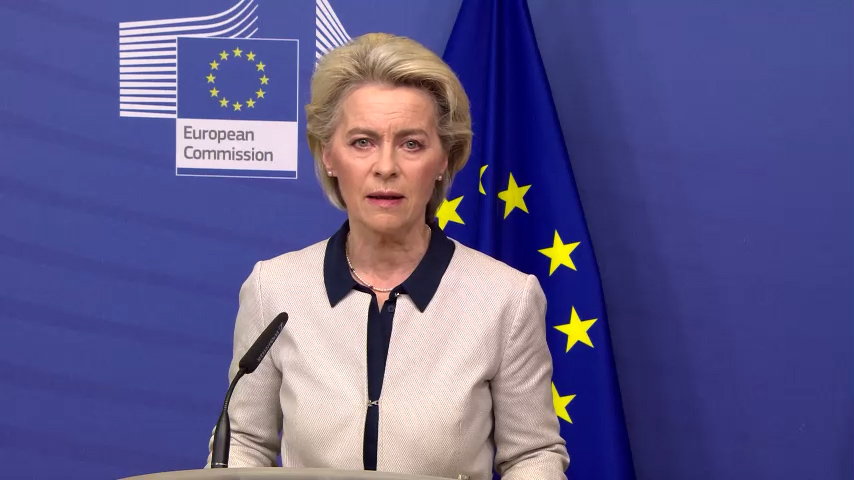 “Russian troops invaded Ukraine, a free and sovereign country. Once again in the centre of Europe, innocent women, men and children are dying or in fear for their lives. We condemn this barbaric attack, and the cynical arguments to justify it. It is President Putin, who is bringing war back to Europe.

“In these dark hours, the European Union and its people stand by Ukraine and its people. We are facing an unprecedented act of aggression by the Russian leadership against a sovereign, independent country. Russians targets is not only Donbass, the target is not only Ukraine, the target is stability in Europe, and the whole of the International Peace order. We will hold President Putin accountable for that.

“Later today, we will present a package of massive and targeted sanctions to European leaders for approval. With this package, we will target strategic sectors of the Russian economy. By blocking the access to technologies and markets that are key for Russia. We will weaken Russia's economic base and its capacity to modernize. And in addition, we will freeze Russian assets in the European Union and stop the axis of Russian banks to European financial markets.

“Like with the first package of sanctions, we are closely aligned with our partners and allies, the United States, the United Kingdom, Canada, but also for example, Japan and Australia. These sanctions are designed to take a heavy toll on the Kremlin's interests, and their ability to finance war.

“We know that millions of Russians do not want war. President Putin is trying to turn the clock back to the times of the Russian Empire. But in doing so, he is putting at risk the future of the Russian people. I call on Russia to immediately stop the violence and to withdraw its troops from Ukraine's territory. We will not let President Putin tear down the security architecture that has given us a peace and stability over many decades. We will not allow President Putin to replace the rule of law by the rule of force and ruthlessness. He should not underestimate the resolve and strength of our democracies.

“History has proven that societies and alliances built on trust and freedom are resilient and successful. And that's exactly what the autocrats fear. The European Union stands with Ukraine and its people. We will continue to support them. Ukraine will prevail.”