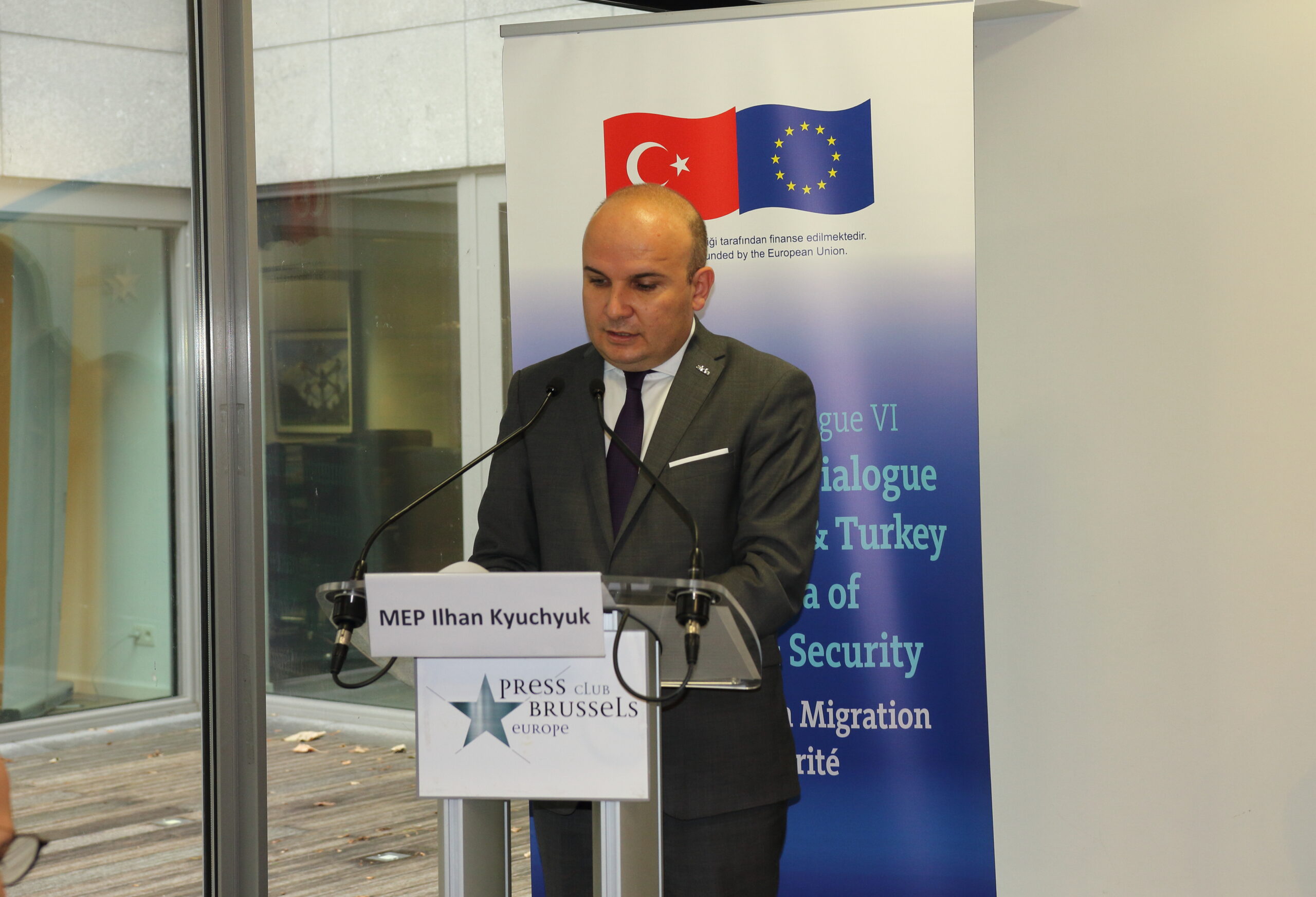 EU-Turkey relations have been enormously strained over recent years. Dialogue for Europe, in partnership with Ankara-based European Union and Global Research Organisation (ABKAD), is currently implementing a project called “Strengthening Dialogue between the EU and Turkey in the Area of Migration and Security”. The project is funded by the European Union under “Supporting Civil Society Dialogue Between EU and Turkey Grant Scheme” and is aimed at fostering greater understanding.

At a conference in the Brussels Press Club, on EU-Turkey relations: ‘Integration of Refugees, Migration Deal and Future Relations’ a panel of experts discussed the current situation and the potential for improved relations and cooperation between Turkey and the EU. EU Reporter interviewed some of the panellists to get a picture of the current situation.

Eli Hadzehieva, director of Dialogue for Europe and the co-ordinator of the project said: “We are focusing on migration and security, because we think that these are the most urgent areas to increase co-operation. This is likely to become a bigger challenge with the situation in Afghanistan.

“Co-operation between the EU and Turkey is not limited to dialogue on migration or security, Turkey is still negotiating on 35 different chapters on a wide range of issues, but what we are aiming for is a co-ordinated approach between migration policies, foreign policies, defence policies, aligning legislation in Turkey and the EU, in this way we will be more able to tackle crisis situations such as the one in Syria and Afghanistan.

“We may be facing another refugee crisis, maybe not as big as the 2015 migration crisis, but still an important one. Notwithstanding political differences and disagreements, the EU and Turkey will need to co-operate as neighbours.”

Hadzhieva says that civil society co-operation is a great way to take a non-partisan approach and explain the frustrations felt on both sides in this debate. She said that it shouldn’t be about “just becoming frenemies”, but to focus on common interests, common concerns and starting to find durable solutions.

Bulgarian MEP Ilhan Kyuchyuk (pictured), who is from the Turkish minority in Bulgaria, welcomed the initiative, particularly the involvement of civil society in raising awareness on joint challenges. He said that Turkey should be seen as a strong ally in security and defence for the EU. Kyuchyuk was originally planned to host the event in the European Parliament, but because of health and safety measures due to Covid this was not possible.

Samuel Vesterbye, managing director of the European Neighbourhood Council, outlined the current situation of Afghan refugees in Turkey: “The situation is one of ambiguity in the sense that, on one side the EU has provided an enormous amount of financing, namely the €6 billion, which have been allocated as part of the 2016 migration deal and under the new the new budget of the multi annual financial framework.” However, Vesterbye went on to say that these communities are the most vulnerable within Turkey, so the challenges are considerable.

Vesterbye makes it clear that the financial contribution is critical, but that the EU and Turkey could do much more to co-operate to address root causes of migration, including in the areas of development aid and other types of foreign and security co-operation.

Koert Debeuf, editor-in-chief of EUObserver, points out that Europe was unable to secure Kabul airport, it was the intervention of the Turkish army who stepped in where European armies didn’t have the capability. This is one concrete example of common security interests, Debeuf argues that Turkey is an essential partner in the entire region. More broadly, Debeuf points to other strategic partners that Turkey could align with, asking bluntly: “Do we want Turkey to be with us, or against us?”

One of the difficulties in current relations is the unpredictable nature of President Erdogan for EU leaders, says Debeuf, while adding that Turkey is not the only partner that has been unpredictable. The European Union has stalled accession and the accession of Cyprus to the EU before the divisions on the island had been properly resolved, has effectively given one party in that unresolved conflict a veto.

Kuneralp also underlined how the Cyprus situation had made the EU-Turkey relationship more difficult: “The Cyprus problem, particularly since the accession of Cyprus to the European Union, constitutes the main source of blockage in the negotiations on accession, and the negotiations on deepening the customs union and everything else. We face a situation where the only area where the two sides are working together is on migration, this is a very important common challenge, but that in itself shows that the two sides really need each other.”

Asked how relations could improve between the EU and Turkey, Kuneralp said that the most important thing that the European Union can do is to change the rhetoric. He says there needs to be a change in the mindset in Europe, if that changes there can be a change and a clearer perspective on integration can be worked towards.

Professor Hatice Yazgan of ABKAD outlined how the migration issue had evolved in Turkey and the value of greater dialogue. Yazgan pointed to participation in Erasmus+ as a good way to strengthen relations between the EU and Turkey.

"This article was published as part of an EU-funded programme"

The Commission has signed an agreement with Turkey for tighter co-operation in EU research, innovation and education programmes. For the period 2021-2027, Turkey has been granted association status to Horizon Europe, the EU research and innovation programme, Erasmus+, the EU programme for education, training, youth and sport, and the European Solidarity Corps. As a result, researchers, innovators, students, pupils, trainees, teachers, and young people established in Turkey can now participate under the same conditions as participants from EU member states. Association to the research and innovation framework programme is the closest form of cooperation with countries outside the EU. Association to Horizon Europe supports the 'Global Approach to Research and Innovation' and reconfirms Europe's commitment to a level of global openness needed to drive excellence, pool resources for faster scientific progress and develop vibrant innovation ecosystems.

Association to Erasmus+ supports lifelong learning, educational, professional and personal development of people in education, training, youth and sport, in Europe and beyond, thereby contributing to sustainable growth, quality jobs, social cohesion and active citizenship. The European Solidarity Corps enhances the engagement of young people and organizations in activities as a means to contribute to strengthening cohesion, solidarity, democracy, by addressing societal and humanitarian challenges.

Innovation, Research, Culture, Education and Youth Commissioner Mariya Gabriel said: “I welcome Turkey to Horizon Europe, ERASMUS+ and the Solidarity Corps. The Turkish participation in the new generation of our EU programmes will further reinforce their capacities and support integration into the European Research Area and European Education Area.”  More information is available here.

Turkey dispute with US eases after threat to expel envoys 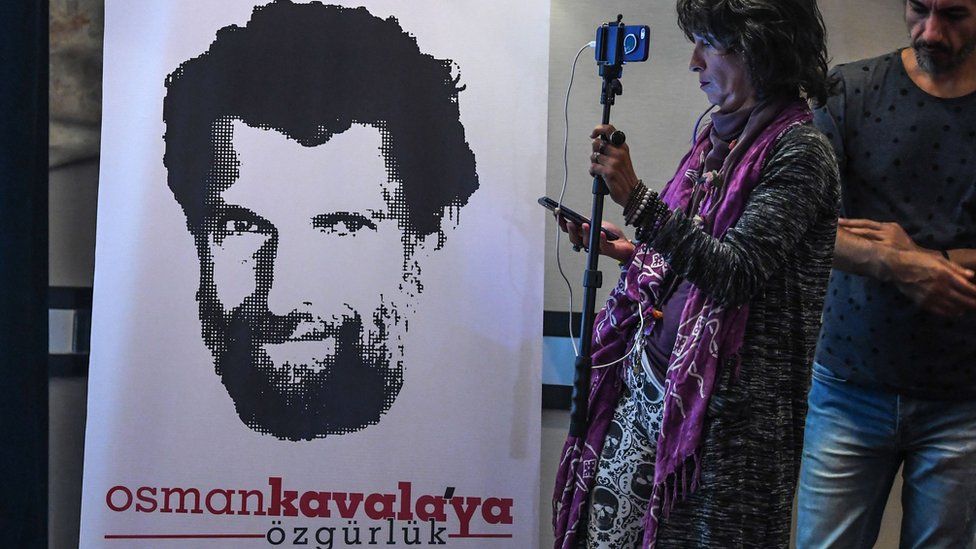 Tensions between Turkey and 10 Western countries including the US have eased, days after the Turkish president threatened to ban their ambassadors, writes the BBC.

But on Monday (25 October), the countries involved said they would not interfere in Turkey's affairs.

An adviser to Erdogan told the BBC the president welcomed this and that the issue was almost settled.

The dispute flared when the embassies of the US, Germany, Canada, Denmark, Finland, France, the Netherlands, New Zealand, Norway and Sweden issued an unusual statement calling for the release of jailed philanthropist Osman Kavala.

The 64 year old has been in jail without a conviction for four years over protests and a military coup attempt in 2016.

Kavala denies any wrongdoing and critics of the Erdogan government say his case is an example of a widespread crackdown on dissent.

The Council of Europe, Europe's main human rights watchdog, has given Turkey a final warning to heed a European Court of Human Rights ruling to free Mr Kavala pending trial.

President Erdogan was enraged by the ambassadors' intervention.

"I gave the necessary order to our foreign minister and said what must be done," he told a crowd on Saturday. "These 10 ambassadors must be declared persona non grata at once."

Persona non grata - meaning an unwelcome person - can remove diplomatic status and often results in expulsion or withdrawal of recognition of envoys.

But the president appears to have stepped back from that decision after the US Embassy and others in Turkey issued statements as he entered a cabinet meeting.

The embassies cited part of an international treaty that says ambassadors have a duty to not interfere in the domestic affairs of their host country.

"The United States notes that it maintains compliance with Article 41 of the Vienna Convention on Diplomatic Relations," the US Embassy said on Twitter.

Turkey: A serious diplomatic crisis that can still be avoided

The announcement that ten ambassadors have been expelled from Turkey can only be understood as an attempt to divert attention from the real urgent issues, state MEPs, AFET.

“The measures announced by President Erdoğan against 10 ambassadors over their statement on the ongoing persecution of businessman Osman Kavala are incomprehensible and completely baseless. We can only understand them as an attempt to divert attention from the real urgent issues, domestic and bilateral. It is not these Ambassadors or their governments who decided it is Turkey’s responsibility to release Osman Kavala. It is the European Court of Human Rights that ordered his immediate release in December 2019, reiterated afterwards by six decisions and an interim resolution by the Committee of Ministers of the Council of Europe. Turkey is therefore obliged to respect this Court's decision, just as it is under the obligation to follow a similar ruling on Selahattin Demirtaş.

Rule of law and fair trial guarantees are foundational pillars of any democracy. As repeatedly underlined by reports of the European Commission and the Council of Europe, and stressed in the Annual Report of the European Parliament, Turkey has a serious deficit in these fields that needs urgent correction. Those problems are addressed by comprehensive reforms, not by sanctions against those who merely demand what the European Court of Human Rights had clearly stated. It is unacceptable that attacks on critical voices and interference with the judiciary have continuously been happening in Turkey. It is more than unfortunate that now an attempt has been made to silence the criticism from abroad. Our position on Osman Kavala’s case and criticism of other democracy deficits in Turkey will remain undeterred despite this sad development.

We are on the verge of a serious diplomatic crisis that can still be averted. We call on Turkish authorities to refrain from steps that could result in an even worse scenario in our relations than the difficult period we have been living through during the recent years, a crisis that we just were hoping to overcome. Once again, we call on Turkey to comply with its international commitments and abide by the ECtHR rulings with regard, among others, to the cases of Osman Kavala and Selahattin Demirtaş.

We urge the European Union to coordinate a joint reaction and while still possible encourage Turkish counterparts to de-escalate.”

President Erdoğan announced on Saturday that he had given the order to Turkey’s Foreign Minister to declare the Ambassadors of ten countries “persona non grata.” The ten countries are Canada, France, Finland, Denmark, Germany, the Netherlands, New Zealand, Norway, Sweden and the United States of America. President Erdoğan wants the ambassadors expelled after the ten countries in question urged the Government to release Turkish activist Osman Kavala, who has been a political prisoner in the country for almost four years, without conviction.

On 8 October, the Foreign Affairs Committee Standing Rapporteur for Turkey Nacho Sanchez Amor (S&D, ES) was in Turkey and attended Kavala’s trial in a show of solidarity.