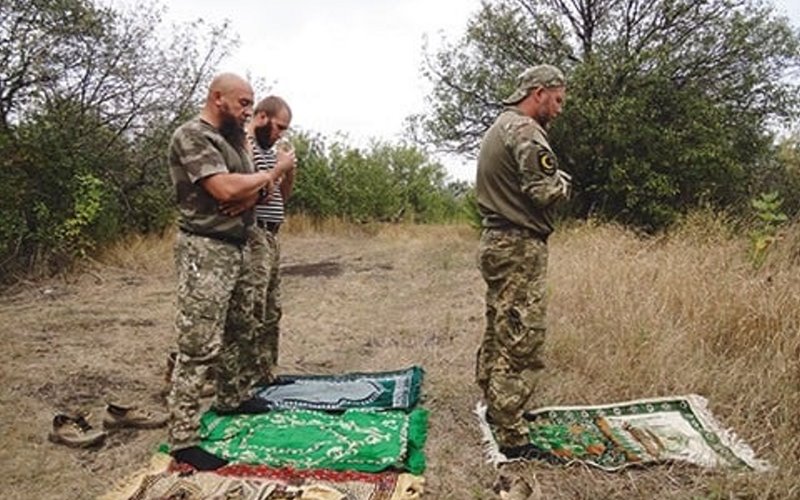 Putin hires Muslim fighters in his ‘holy’ war against Ukraine. Patriarch Kirill keeps silent about it and turns a blind eye

In the name of the alleged defence of the “Russian World” and the Russian-speaking inhabitants of Ukraine (against their will), President Vladimir Putin has recently involved Muslims in his “special military operation in Ukraine”: Chechen fighters who have gained a reputation as fierce warriors in two wars against Russia, the first from 1994 to 1996 and the second from 1999 to 2014 and mercenaries from Syria – writes Willy Fautré, director of Human Rights Without Frontiers

According to the Middle East Monitor, the Russian Presidency had announced on 18 March that it had "opened the doors for volunteering to fight alongside Russia against Ukraine." And Defence Minister Sergei Shoigu said Moscow had received a large number of applications from various countries, noting that most of the applications were from the Middle East. Over 1000 in a few days, according to the Middle East Monitor which also said that President Bashar Al-Assad's regime had promised to pay the Syrian fighters generously.

A number of Muslim organizations in the “Russian world” are taking sides with President Putin in his war against Ukraine.

As explained to the Russian Orthodox press agency Interfax on 22 March, “the Muslims of the Luhansk People's Republic disagree with the radical statements of the head of the Ukrainian Mufti's Office, Said Ismagilov, who accused Russian Muslims of killing civilians in Ukraine.”

The petition for admission to the Russian Muftiate was signed by ten imams of the "LPR" led by the head of the Spiritual Administration of Muslims of the "Republic" Eldar Gambarov.

Noteworthy is that the heads of three Russian Muslim organizations have quickly backed the rhetoric of Vladimir Putin about the invasion of and the war in Ukraine:

Human Rights Without Frontiers has put those names on its blacklist of religious leaders and institutions which the EU, the US and the UK should include in their sanctions, according to the NGO.

In a video message, Mufti Said Ismagilov of the Spiritual Administration of Muslims of Ukraine called on all Muslims of the world not to participate in Putin's plan to destroy Ukraine.

"We have learned that the criminal Russian regime of Putin wants to recruit mercenaries from different countries to use them in the war against Ukraine. I call on Muslims around the world not to take sides with the criminal, aggressor or with Russia, which attacked and is killing us. It attacked our free and independent Ukraine, where Muslims lived happily and freely professed Islam. We are rightful citizens of our country and are now suffering from Russian aggression," the Mufti stressed.

"I call on all the Muslims of the world to take the side of Ukraine. Help us with prayers, donations and support because this is very important for us. I call on all mercenaries from the Middle East and other countries who have volunteered to be on the side of the Russian occupation not to do so. This will bring you neither happiness nor profit, but it will be a great crime," Mufti Ismagilov urged Muslims.

He assured that the Muslims of Ukraine have already come to the defense of their lands: "We are defending our state and will continue to defend it. I ask Allah to keep all mercenaries, especially Muslims, and all people from making such a big mistake. Be people of peace, justice and kindness."

Chechen Muslims after President Zelensky, of Jewish faith, and antisemitism of Kadyrov

On 2 March, the Washington Post titled a paper of Timothy Bella “Assassination plot against Zelenski foiled and unit sent to kill him destroyed, Ukraine says.”

“A recent alleged assassination plot against Ukrainian President Volodymyr Zelensky was foiled over the weekend and the Chechen servicemen sent from Russia were destroyed, a Ukrainian security leader said Tuesday.

Oleksiy Danilov, the secretary of Ukraine’s National Security and Defense Council, said during a broadcast marathon airing on Ukrainian TV channels that officials were recently tipped off that a unit of Kadyrovites, elite Chechen special forces, was on its way to kill Zelensky. After Ukrainian officials were informed by Russia’s Federal Security Service (FSB), the Chechen special forces were killed Saturday on the outskirts of Kyiv, Danilov said.”

In August 2019, OC Media reported that Ramzan Kadyrov caused anger among Israel’s Russian community after making an anti-Semitic statement while addressing Chechens from Jordan, who had been invited by his Government on a cultural visit to the Chechen capital, Grozny.

In his hour-and-a-half speech on 13 August, Kadyrov said that ‘the prophet Muhammad killed the Jews, most of all’. He also called Jewish people ‘the main enemies of Islam’. The meeting was broadcast on Chechen state television. OC Media also reported other similar incidents.

If Chechen Muslims fighting with Putin’s army managed to capture or kill President Zelensky, who happens to be a Jew, this could be a major incident with unpredictable reverberation in the US, Europe and the Middle East.

The silence of Patriarch Kirill of the Russian Orthodox Church

Patriarch Kirill’s blessing of Putin’s war on Ukraine has caused a huge outcry of protest in the world as well as in the international religious community, and also divisions inside the Russian Orthodox Church.

Before the present-day war, the Ukrainian Orthodox Church (UOC) led by Metropolitan Onufriy in communion with Patriarch Kirill claimed 12,000 parishes, which is about a third of all the parishes of the Moscow Patriarchate. The independent Orthodox Church of Ukraine (OCU) led by Metropolitan Epiphanius claimed over 7000 with about 58% of the Orthodox population. It was created in December 2018 and granted autocephaly in January 2019 by the Ecumenical Patriarchate of Constantinople which has 260 million Orthodox worldwide.

Blessing a war the objectives of which are purely political with the hope of getting back a substantial amount of parishes and their rich assets is nonsense as Patriarch Kirill will lose the souls of the Ukrainian Orthodox.

Consolidating the grip of the Russian Orthodox Church in Ukraine, silently accepting the internal displacement of over 10 million Ukrainians and the “cleansing” of religious diversity in Ukraine as in Russia at the price of the involvement of foreign Muslims to do this dirty job is beyond any moral norm.

Although the war in Ukraine is not a religious war, Patriarch Kirill has opened a Pandora box of religious evil geniuses which might escape and lead to a lot of destruction inside and outside.

The Patriarch should better listen to his heavenly God than to the voice of Putin.