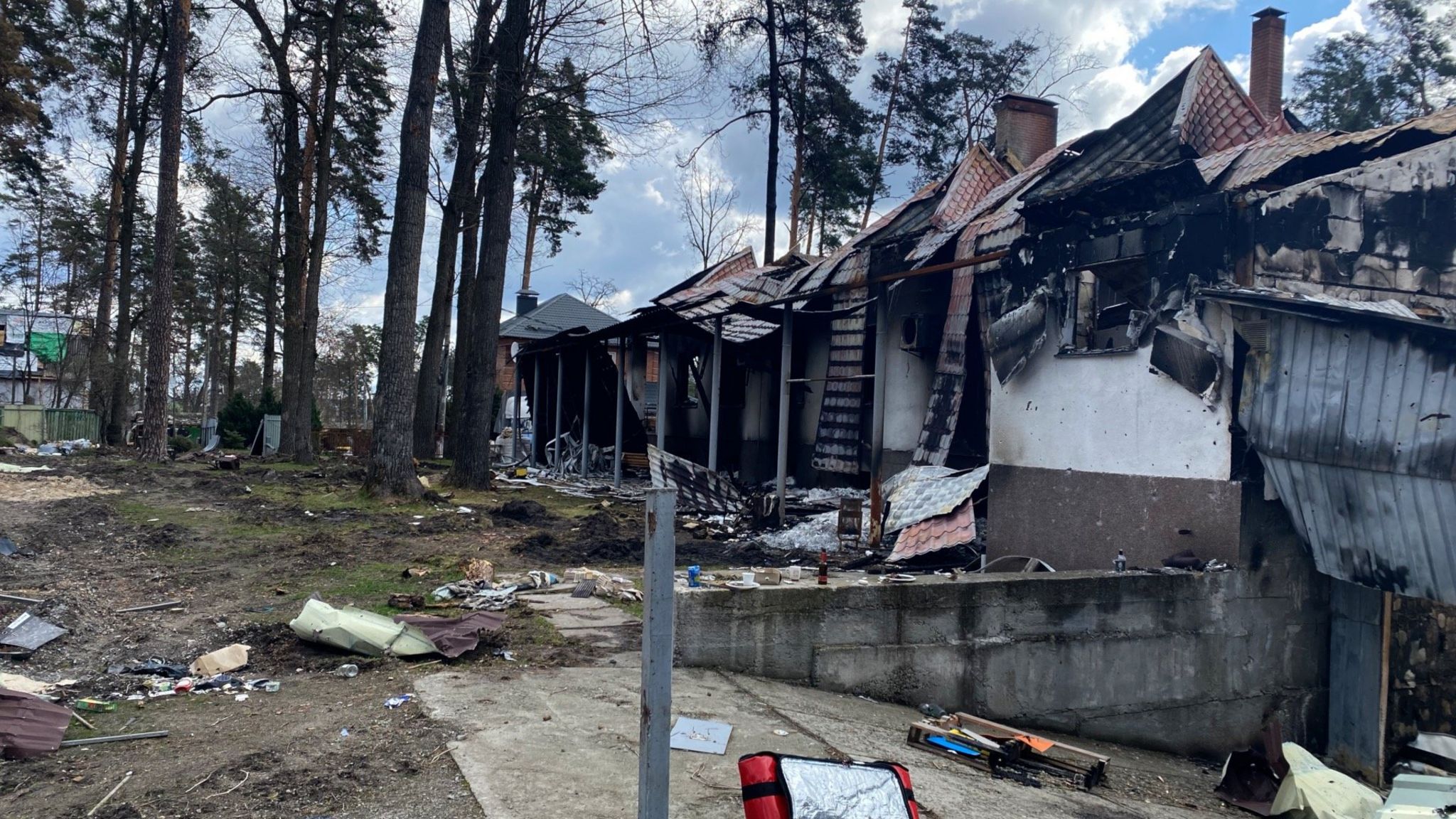 Emmanuel Macron, Justin Trudeau, Anthony Blinken, Olaf Scholz, Bono from U2, Mario Draghi. About 100 world-famous people have visited Irpin over the past nine months. Destroyed but unconquered, Irpin has become an attractive photo zone for foreign guests and a symbol of invincibility at the cost of destruction. But with time, foreign delegations also became a bright symbol - a symbol of sighing about the fate of the hero city without further quick, direct and effective help. Therefore, just like in February, the city’s management team decided to save and further develop Irpin independently, writes Chairman of the Investment Board of Irpin Volodymyr Karpliuk.

In April this year, we set ourselves the task to ensure that 100% of its residents could return to Irpin by the end of 2023. We promised the citizens they would return to their Ukrainian city when we evacuated them by rail and the "road of life" under the Irpin bridge in March.

We assessed the situation and were the first de-occupied cities to calculate the losses. According to the experts of the Irpin Investment Council, at least $1 billion is needed to restore the city. Behind this impressive figure at the start of the recovery was a sad statistic: 1483 wholly destroyed and 1130 partially damaged private houses, 515 multi-story buildings with the need for current repairs, and 80 - capital repairs. At the same time, 39 high-rise buildings are to be demounted.

But we did not sit on the fence or wait for the results of the "sighs" of foreign delegations. Together with the mayor of Irpin Oleksandr Markushyn and our team, we visited dozens of cities in the USA and Europe. We had strong awareness that the state budget funds are concentrated in the direction of the front, and we must attract new resources to restore the city.

In general, we determined five main areas of work: international negotiations, the formation of a package of presentation materials with visualization of destruction and estimates of needs, the launch of the Irpin Recovery Fund, the work of the architectural and design direction of the IrpinReconstruction Summit and the involvement of real partners.

This problematic year is coming to an end. Now it is time to look back at what has already been done. Eighty-seven multi-story and 104 private houses have been fully restored in Irpin; roofs have been repaired in 17 multi-story and 15 private homes. Irpin City Council provided construction materials for the restoration of facades and roofs of 95 multi-story buildings for a total amount of 45 million UAN.

Due to the successful communication of the Irpin Mayor with the state budget, the city of Irpin received: UAN 25 million for the dismantling of multi-story residential buildings (under implementation), UAN 275 million for the current repair of the housing stock, UAN 95 million as a subvention for construction materials, UAN 120 million was transferred to contractors for the recent repair of the housing stock and social institutions of the Irpin community

At the expense of the state budget, the roofs in schools № 1, 2 and № 17, as well as in three kindergartens were replaced: "Znaiko,” "Bdzhilka,” "Kolibri.” New windows were installed in the educational association "Osvita" and kindergartens "Lisova Pisnya" and "Znaiko.” Windows were also replaced in the children's clinic, maternity hospital, and dormitory for medical workers. Windows and doors were replaced in three outpatient clinics of family medicine - №2, №6, №7. The roof and ventilation were repaired in the clinic at 38 Sadova Street.

Currently, the Kyiv Regional Military Administration has already approved a list of facilities in Irpin, which the state promises to include in the Resolution of the Cabinet of Ministers of Ukraine for funding under the UNITED24 presidential program shortly. But someone is now openly sabotaging the movement in this direction, but Irpin is not the first time to face the sabotage of the presidential vision.

Among the already implemented projects, an example of positive cooperation is the project initiated by the Minister of Community and Territorial Development, Oleksiy Chernyshov, to install modular towns. Housing for 700 people who lost their homes was built on the territory of the former sanatorium "Dubky".

The construction of a new modular village has already begun in Irpin, on the part of the former sanatorium "Lastivka.” Finland has provided 12 townhouses with three apartments in each, which is 36 apartments. Poland provides housing for our citizens for the construction of 240 apartments. In total, the modular town on "Lastivka" will have 276 apartments for Irpin residents who lost their homes due to Russian aggression. It is the largest project in Ukraine to provide social housing for the affected citizens.

SOCAR took under its care the school №12, where it replaced the roof, doors, and windows and repaired the facades. Luxembourg Red Cross repaired the top of the children's clinic and replaced windows in the new medical center on Sadova Street.

In total, 35 social infrastructure facilities have already been restored.

The International Committee of the Red Cross handed over to the city three excavators, a car for the transportation of drinking water, spare parts for the repair of damaged equipment, tools for emergency utility crews, equipment for boilers, and water and sewerage networks. Thanks to the ICRC's assistance, part of the external engineering networks, the water supply system at the entrance to the city, and the sewerage system on Soborna Street have been restored in Irpin.

With the support of UNICEF, ten shelters were arranged in educational institutions of the Irpin community, including the Irpin Lyceum of Innovative Technologies (ILIT), the academic association "Osvita,” secondary schools №. 1, №. 17, Mykhailivsko-Rubezhivska school, kindergartens "Bdzhilka "Smiley,” "Lisova Pisnya,” "Znayko.” In addition, the facade of school No. 17 was renovated, current repairs were made, and new windows and doors were installed in the school in Mykhailivka-Rubezhivka. Shelters were also arranged, and damaged parts of buildings and yards were renovated in two kindergartens - "Smilyk" and "Bdzhilka.”

In addition, the city has already signed a Memorandum with UNICEF to allocate USD 2 million for the restoration of the academy №3. Currently, UNICEF has already funded the design of the overhaul of the third academy. UNICEF Representative in Ukraine Murat Shahin is a true friend of the Irpin community.

Significant support in the restoration was also agreed with Lithuania, which has already allocated 3 million euros for the restoration of the kindergarten "Radist" in the Irpin micro district BKZ.

Special attention deserves colaboration with "sister cities", as they like to say in the United States. Irpin has sister cities with which we have been cooperating for years. The city of Milwaukee in the United States, which in the early days of the war announced a fundraiser for Irpin. The city of Borna in Germany, which has received and resettled 130 families of Irpin residents and is now giving us stoves for heating worth 50 thousand euros. Lithuanian Alytus, which was one of the first to give Irpin an ambulance. This is the Polish city of Pisz, which has repeatedly provided humanitarian aid to Irpin.

Immediately after signing the agreement, the Portuguese city of Cascais decided to allocate 500 thousand euros for the completion of the kindergarten "Vinochok" on Kyivska Street in Irpin.

During our visit to Washington, we agreed with Gensler - one of the most reputable architectural companies in the world - to develop a master plan for the restoration of Irpin. Gensler will do it for free - for the first time in the company's history. We have been working on this agreement for a long time.

The architectural vision of our team is that Irpin should regain the status of a resort city, so we will focus on developing the private sector, increasing green areas, and developing rehabilitation medicine.

Thanks to an agreement with Miami Police Chief Manuel Morales and Miami, For the first time in the history of the United States, the Miami police will transfer confiscated weapons to the Irpin police. This is truly a remarkable story. I want to thank Ukrainian MPs Marian Zablotskyi and Serhiy Ionushas, as well as the leadership of the National Police of Ukraine, who did everything to make this deal happen.

In addition to the confiscated weapons for the Irpin police, we have agreed on assistance with philanthropists from the United States, who are already purchasing weapons and equipment worth 50 thousand euros for the territorial defense of the city. This is very important because the war in Ukraine is still going on.

An essential role in the restoration of the town was played by the project "Dobrobat,” whose founders Rostyslav Smirnov and Viktor Andrusiv organized the dismantling of the rubble of private houses from the first days of de-occupation.

Our team created an official working group to restore the city - the Irpin Reconstruction Summit (IRS). Today it includes about 200 Ukrainian and international specialists who, working in project teams, have already developed and presented 22 design and architectural proposals and estimates for reconstructing and restoring social facilities in Irpin.

Thanks to the cooperation of the Irpin Reconstruction Summit with the Italian TDH Foundation, about 700 thousand dollars have been raised for the reconstruction of 4 residential buildings: the roof is being repaired in the Aristocrat residential complex, and in the Everest, Zatyshok and Mineral condominiums, in addition to improving the top, windows and doors are being installed, walls are being restored, and facades are being insulated. The project is fully funded by the Ukraine Humanitarian Fund (UHF).

The IRS team carried out a statistical analysis of damaged and destroyed objects and developed a catalog based on the collected information for 100 residential buildings and 20 social facilities. A Memorandum of Understanding was signed with the Green Building Council of Italy, Thought Group, Integral Infrastructure, and Urban Planning Solutions, Stefano Boeri Architect, with international experts and architects: President of the Green Building Council of Italy Marco Mari, Italian architect Stefano Boeri, Chilean architect Christian Wittig, Japanese architect Hiroki Matsura.

Today, Irpin is appealing to international partners and local governments from all over Ukraine to help us with generators and alternative energy solutions to ensure the uninterrupted operation of critical infrastructure, primarily medical and educational facilities.

We need partners who will help the city with construction materials. These can be Ukrainian and foreign manufacturers and traders of building materials, chain stores, etc.

What do we want from the state? We need constructive cooperation. We just want to be heard and seen and not invited, for example, to working meetings on the restoration of the bridge in Irpin instead of Irpin Mayor Bucha or Makarov - this is at least strange. We want the state to eliminate dozens of "intermediate" institutions through which the funds for the restoration pass. Because the funding reaches the contractor according to the approved estimates, the cost of materials will increase by 20-30%. We ask you to hear us: we have always given results in Irpin. And now we are ready to do everything to ensure that Irpin becomes not only an example of rapid recovery, but also, shortly - an all-Ukrainian hub for the model restoration of all de-occupied territories.