Italian navy and coastguard vessels have rescued more than 1,000 migrants off Lampedusa in the past 24 hours, according to Italian officials.

On Thursday (2 January) 823 migrants were picked up from four overcrowded, rickety boats. The migrants were mainly from Egypt, Tunisia, Iraq and Pakistan.

On 1 January, 233 migrants were saved in a separate operation. They were from Pakistan and several African countries.

Lampedusa has struggled to cope with thousands of migrants coming ashore.

The latest boatloads of migrants have been taken to Sicily.

Last October more than 400 people drowned in two shipwrecks near Lampedusa, which is the closest Italian territory to North Africa.

Many of the victims were from Eritrea and Somalia. But in the past year the migrant numbers from Syria have soared because of the civil war there. 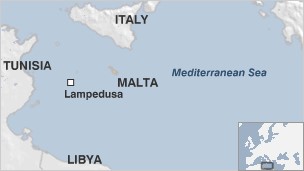 Meanwhile Greek coast guards rescued 85 migrants off the island of Astypalaia on Thursday.

Greece and Italy are the main Mediterranean entry points for migrants fleeing poverty and violence in Africa and Asia.

The BBC's Alan Johnston in Rome says the Italian authorities used to expect the flow of migrants to diminish in winter, when crossings are riskier in the much colder, stormier conditions.

But the fact that so many have been rescued in the last few days - in the depths of winter - is evidence of the desperation of those attempting to reach Europe, and begin new lives, he says.

The migrants rescued in Italian waters on Wednesday were reportedly from Eritrea, Nigeria, Somalia, Zambia, Mali and Pakistan.

In the past, human rights organisations, including the UN refugee agency UNHCR, have strongly criticised Italy and Greece countries for "push-backs" - a policy of sending migrants back to their point of departure.

The country has also called for help from other EU states to deal with the migrant influx.

The European Commission has asked for more resources for joint sea patrols, and more co-ordination with countries that migrants embark from, such as Libya.

Week ahead: The state we’re in

The big set piece of this week will be European Commission President von der Leyen’s ‘State of the EU’ (SOTEU) address to the European Parliament in Strasbourg. It’s a conceit borrowed from the US, when the President of the United States addresses Congress at the start of each year laying out his (and it has always been a he to date) plans for the year ahead.

I am always amazed by American self-confidence and almost indestructible belief that America is the greatest nation on earth. While thinking you’re just great must be an enjoyable state of mind, the parlous state of the US on so many levels at the moment makes me think that the excessively critical eye Europeans cast on their lot may be a healthier perspective. Still, sometimes it would be nice if we could acknowledge the many pros of the EU and be a bit more ‘European and proud’.

It’s hard to gauge how much interest SOTEU exerts outside those most engaged in the EU’s activities. As a rule Europeans, other than a small group of the most devout, don’t go around bumming about how just bloomin’ great the EU is, or generally being enthused about its direction. While we might have mused on the counterfactual, the UK has provided every EU citizen with a very stark look of “what if?”

Looking at where the world, the EU looks like it is in a healthier state than most - this also has a literal meaning this year, we are probably the most vaccinated continent on earth, there is an ambitious plan to turbo charge our economy out of its pandemic slump and the continent has stuck its chin out and decided to do nothing short of lead the world on tackling climate change. I personally feel a great surge of hope from the fact that we appear to have collectively decided enough is enough with those within the EU who want to backslide on democratic values and the rule of law.

Several proposals will be coming from the Commission this week: Vestager will be presenting the plan for ‘Europe’s Digital Decade’; Borrell will lay out the EU’s plans for links with the Indo-Pacific region; Jourova will outline the EU’s plan on protecting journalists; and Schinas will present the EU’s package on health emergency response and preparedness.

It is, of course, a plenary session of the Parliament. Other than SOTEU, the humanitarian situation in Afghanistan and the EU’s relations with the Taliban government will be debated; media freedom and the rule of law in Poland, the European Health Union, the EU Blue Card for highly skilled migrants and LGBTIQ rights are all up for discussion.

Week ahead: Forewarned is forearmed

Commission Vice President Maroš Šefčovič will present the Commission’s second annual strategic foresight report on Wednesday (8 September). The report comes a week ahead of the annual ‘State of the EU’ address by the Commission president. The initiative is part of an effort to ensure that the EU is resilient in the face of challenges, but also able to prepare itself by embedding foresight into all aspects of policy making. The 2021 Report will look at structural global megatrends towards 2050 that are set to affect the EU, and will identify areas where the EU could boost its global leadership.

On Tuesday (7 September) Commissioner Hahn will hold a press conference on the adoption of the Green Bonds Framework, the EUGBS (the European Green Bond Standard) aims to be a “robust tool to demonstrate that they are funding legitimate green projects aligned with the EU taxonomy”.

Europe fit for the Digital Age Executive Vice President and Competition Commissioner Margrethe Vestager will meet (6 September) with the chairs of five committees (INGE, ITRE, IMCO, LIBE, AIDA) in the parliament for an exchange of views on the digital agenda.

The Women’s Rights Committee and the delegation for relations with Afghanistan will meet to discuss the situation of women and girls’ rights.

The Special Committee on Beating Cancer will meet on Thursday (9 September) will meet to discuss the exchange of health data and the digitization in cancer prevention and care, as well as an update on the implementation of the EU’s chemicals strategy for sustainability in the context of cancer prevention.

The Subcommittee on Security and Defence will discuss the situation in Afghanistan, as well as a study on ‘EU preparedness and responses to Chemical, Biological, Radiological and Nuclear (CBRN) threats’ and Sven Mikser MEP (S&D, EE) draft report on ‘Challenges and prospects for multilateral Weapons of Mass Destruction arms control and disarmament regimes’.

European Union Court of Justice will give its opinion on the recovery of €2.7 billion from the UK for its failure to put in place a risk-based approach to customs control, despite repeated warnings from OLAF, the EU’s independent anti-fraud office. The failure to address this issue also meant that EU manufacturers had to compete with undervalued goods coming into the EU via the EU. OLAF’s figure covers the years 2011-2017. Other important judgements are expected in the field of Asylum (C-18/20, C-768/19).

The European Central Bank will have its regular monthly meeting on Thursday, with inflation now exceeding 2% target, all eyes will be fixed on what the ECB will do next.

EU High Representative Josep Borrell will visit Tunisia on Friday (10 September). In July the Tunisian President Kais Saied dismissed the Prime Minister and suspected the parliament invoking emergency powers in the face of demonstrations over economic hardship and a rise in Covid-19 cases, The EU has called on Tunisia to respect its constitution and the rule of law.

Back to School, EU Reporter’s look at the week ahead

To those of you who managed to get away for a restorative summer break, well done, you’ll need it. The next term is going to be (another) busy one.

Much legislation has started its legislative journey through the EU’s complex decision-making machine, with lots of very meaty proposals on their way to being sliced, diced and spiced, and finally thrown into the conciliation committee frying pan to be presented at five am by a bleary-eyed politician as a hard-won Presidency triumph. Among the biggies are the Digital and the ‘Fit for 55’ climate proposals. The climate proposals promise to be particularly bruising given that the ‘Climate Law’ fixing carbon commitments has already been agreed; finding a final balance between the proposals is going to require horse-trading of a hitherto unknown scale.

The Brussels beltway was quite dormant in August until the catastrophic events in Afghanistan brought 20 years of Western intervention to a less than triumphant panic-filled and inglorious exit. The ‘West’ lies in a tattered mess, with trust at an all-time low. The von der Leyen Commission presented itself as a “geopolitical” one, Biden’s administration declared ‘America’s back!’ - and yet here we are. One thing I have learned is that things are never so bad that they can’t become any worse. The triumph of the Taliban and the brutal reminder that ISIS haven’t gone away will give succour to those who support their ideals elsewhere. It’s not a pretty picture, but Europe and the wider ‘West’ need to have the courage of its better self that defends rights, democracy, the rule of law and prosperity both at home and abroad.

Next week Foreign and Defence ministers will gather for informal councils to discuss the aftermath of recent events. The grave instability closer to home in North Africa, Lebanon and Belarus - among others - and, of course, Afghanistan.

The defence ministers will be meeting to discuss the EU’s Strategic Compass, the aim is to have a complete document by November; recent events have shown that the EU needs to take more responsibility and concerted action in security and defence.

On Tuesday (31 August) there will be an extraordinary meeting of Justice and Home Affairs ministers who will gather to discuss how they will deal with the inevitable movement of people from Afghanistan, resettlement in the EU, and also supporting those neighbouring countries who have already taken in millions of refugees who will need more financial support.

It’s hard to be a beacon for the rule of law abroad, if your own constituent parts are happily tearing up norms, which brings me to Poland and Hungary where the state of stasis has remained during the summer.

Von der Leyen rebuffed MEPs and legal experts in a five-page letter that listed how Hungary had breached six of eight rule-of-law principles linked to the spending of the EU budget and should therefore trigger the recently minted ‘rule of law conditionality’ mechanism to prevent the misuse of funds. Von der Leyen wrote that MEPs had not provided enough evidence of the breaches and that the Commission “has not been properly called upon to act".

Poland’s day of reckoning on 16 August was a non-event, with further prevarication from Commission HQ. One can’t help but think there is someone in the Commission legal service who has the Douglas Adams quote framed on their wall: “I love deadlines. I love the whooshing noise they make as they go by.”

The Commission kicked the can down the road as they “read and analyse” Poland’s response. Vice President Jourova will visit Poland on Monday (30 August). The noises coming from Justice Minister Zbigniew Ziobro are not encouraging, recently tweeting that the EU is engaged in a “hybrid war” against the EU.

In the meantime, Slovenia continues to stall on nominating prosecutors to the European Public Prosecutor's Office, with Slovenian Prime Minister Jansa blocking nominations.