Prominent Russian businesswoman Marsha Lazareva was sentenced this month to ten years hard labour in Kuwait after a conviction for misusing public funds. She denies all of the charges and has confirmed that she will appeal the decision, writes James Wilson.

However, concerns are growing as she sits in the notorious Sulaibiya prison in Kuwait, where she shares a small cell with seven other women.  The prison has an official capacity of 2,500 inmates but is currently grossly overcrowded and housing 6,000 detainees. 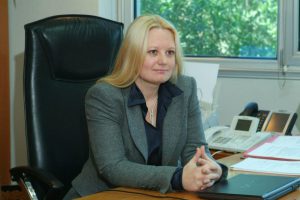 Lazareva is a leading figure in Middle Eastern business, known for her role as chief executive and vice-chairman of the private equity group KGL Investment (KGLI), a company she has led since 2007.  KGLI manages The Port Fund, which invests in mid-sized, high-potential port management and logistics-related businesses, including a joint venture that built the logistics hub Global Gateway Logistics City on a former U.S. military base in The Philippines.

The charges against her centre around an accusation that she illegally took Kuwait Port Authority monies, a claim she denies completely. Lazareva has given one interview to Forbes magazine, in which she insisted she will pursue her innocence through an appeal. She explained to Forbes the range of injustice she has been subjected to so far in the case: “In spite of numerous requests by my lawyers, the judge denied me full access to all accusatory documents and also denied my calling of all my witnesses.  When I was accused in April 2017, I immediately returned to Kuwait from a business trip to Europe to clear my good name and reputation. All my human and civil rights were completely violated during the court hearings. The judge made many racist comments toward me during the case and singled me out as a woman.”

As well as the conditions that Lazareva is being kept in, and the human rights abuses that she and her legal team claim she has suffered, concerns are also being raised about the way she has been persecuted, first on one completely different claim of espionage and intelligence gathering, before the charges were then changed completely to financial accusations.

The original spying case began when a former KGLI employee filed a complaint that she had been involved in spying and intelligence gathering on behalf of a foreign country. Lazareva was the accused in April 2017 before being arrested in November 2017.  She was held in prison for seven weeks before being released on bail of 9 million Kuwaiti dinars ($30m).  After her release on bail she was given a travel ban. In addition she was placed under surveillance by government agents.

Suddenly the espionage charges were replaced with charges of assisting embezzlement during April 2006 and March 2013.  This meant that she and her legal team had to quickly shift from defending espionage charges to building a defence against financial charges. Her legal team, which includes the London law firm Brown Rudnick, was given just one week to examine 18,000 pages of allegations before she faced Judge Metaeb Al Alredi on Sunday, 6 May.

Forbes magazine reported that Ms Lazareva was refused permission to leave the court to go to the bathroom when feeling ill, saying that her defence lawyer is said to have been told by Judge Al Alredi to “let her vomit in the corner at the back of the room”, an indignity which has caused dismay amongst international observers.

Her lawyer Neil Micklethwaite, a London-based partner at Brown Rudnick, confirmed that plans have been lodged for an appeal against the conviction and that this is expected in the next month.  He called the case against Lazareva “one of the most extraordinary miscarriages of justice I have come across in 30 years”.

The author, James Wilson, is the founding director of the International Foundation for Better Governance.

#Azerbaijan: No deal without respect of EU values, say MEPs