Those areas of the United Kingdom now expected to vote yet again for anti-EU parties in the European Elections were not always so insular.   Take the East Midlands, for example.   In the outgoing European Parliament, the region was represented by two Conservatives, two UKIP members and only one from Labour.   Much the same is expected to happen this time around, albeit with the Brexit party probably replacing UKIP and also perhaps ousting a Conservative.   It all suggests a very anti-European caste to the counties involved: Lincolnshire, Northamptonshire, Derbyshire, Nottinghamshire, Leicestershire and Rutland.   But it wasn’t always like that - writes Jim Gibbons.

A Humber keel moored at Saxilby before 1910. The Ship Hotel has gone but the pub in the background, The Sun, is still open. Picture from the John Wilson Collection

Through part of Lincolnshire runs the Fossdyke, by far the oldest canal in the United Kingdom.   A bronze statuette of the Roman god Mars, now in the British Museum, was found in the canal in 1774, along with other Roman artefacts, while Roman pottery kilns have been found close to where the Fossdyke joins the Trent.   Some think it may have been dug at first as a means of draining swamp land but there is also evidence that the Vikings may have had a hand (or at least a boat) in it in around 900 AD.   Its first mention came in Symeon of Durham's Historia Regium, which states that King Henry I (a Norman, of course) had the waterway dug and ordered the Bishop of Lincoln to keep it open.   It may have meant deepening and widening a Roman or Viking construction, but even if work only began then it would still pre-date any other canal in the country by centuries. 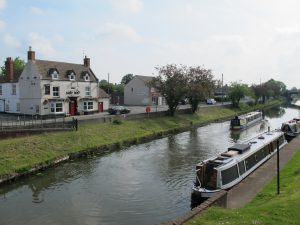 So far, then, we have the Romans and the Vikings taking up residence.   It was conquered by the Saxons and became part of the Kingdom of Mercia until 1013 when Sweyn Forkbeard and his son, Canute, invaded, establishing their capital at Gainsborough on the River Trent, where some think Canute may have tried his famous “turning-back-the-tide” trick on the tidal bore there.   Sadly, Sweyn was thrown from his horse and killed five weeks after arriving and Canute moved away to run his new kingdom from elsewhere.   And the “turning-the-tide” story may be no more than a myth anyway.   However, it’s widely believed (if unproven) that Sweyn and Canute brought their forces by boat along the Fossdyke.

So here we have European collaboration: Romans, Vikings, Saxons, Normans and Danes created and maintained this useful eleven-mile stretch between the Witham at Lincoln and the Trent at Torksey Lock.   Over the years it silted up and was re-opened several times but overall still served as a route for corn, wool, ale, coal and pit props, among other things.   The pit props mainly served the Nottingham coalfield.   Wool was mainly shipped to the northern textile mills via Torksey and the Trent and Mersey canals.  The village of Saxilby was so busy in international trade that it had its own permanent customs officer (no customs unions back then) to oversee the importation of raw materials from the Netherlands and the export of fertilizers from Saxilby’s Lindsey and Kesteven fertilizer plant, at one time the village’s biggest employer.   Goods would arrive on sea-going cargo vessels at Hull and transfer onto small canal boats known as Humber keels, each of which could carry 40 tons, sailing when the wind was with them and being towed by horses when it wasn’t.   Of course, the same process worked in reverse for outbound goods.

So Saxilby and its surrounding area had strong and vital links with continental Europe.   It lost a lot of men in the two world wars.   It was because of those wars that in 1952 the then French Foreign Minister, Robert Schuman, proposed tying the coal and steel industries of France and Germany – what he called “the engines of war” – into a single entity, making future conflict impossible.   In his speech he said “this proposal will lead to the realization of the first concrete foundation of a European federation indispensable to the preservation of peace”.   In 1957 it became the Common Market and eventually the European Union, with trade facilitated by common standards and open borders for the free movement of goods, services, capital and people.

Times have changed, but the twenty-eight (soon to be twenty-seven) countries of the European Union remain at peace one with another while goods continue to flow across borders.   Not via the Fossdyke these days: the last commercial Humber keel sailed along it in 1971.   Today it welcomes mainly pleasure craft, including rented or owned narrow boats which add colour.   Now the canal side has been undergoing a facelift.  Saxilby residents, businesses and councillors, working with the Canals and Rivers Trust, have been working to restore the old canal side, cutting back the undergrowth, clearing the towpath for walkers and creating picnic areas as well as painting bridges and generally tidying up what was once an industrial necessity and has now become a leisure asset.  The process will be celebrated with a Waterfront Festival in July, partly to unveil the plans for further regeneration and partly to help raise money to pay for it.  Not all of the East Midlands is Eurosceptic, nor is all of Saxilby, although pockets of hostility towards Europe in the region mean getting a pro-EU majority here will be very difficult, in fact almost certainly impossible.   Canute would have had about as much luck telling the tide to go back.   After all, he was a foreigner, too.

#EIB to support €3.4 billion of new investment in business, innovation, agriculture and tourism

Where should the #Dutch go with their new policy towards #China?