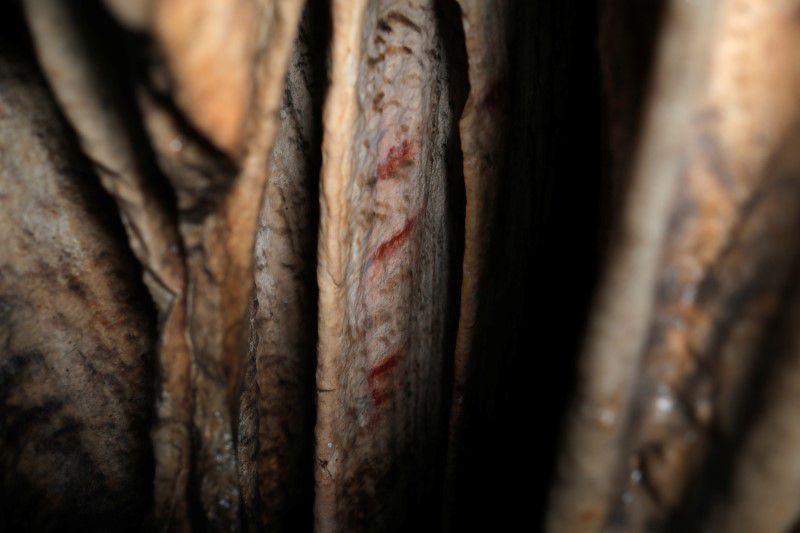 Red ocher markings which were painted on stalagmites by Neanderthals about 65,000 years ago, according to an international study, are seen in a prehistoric cave in Ardales, southern Spain, August 7, 2021. REUTERS/Jon Nazca

Neanderthals may have been closer to our species of prehistoric modern human than previously believed after cave paintings found in Spain proved they had a fondness for creating art, one of the authors of a new scientific report said on Sunday (8 August), write Graham Keeley, Jon Nazca and Mariano Valladolid.

Red ochre pigment discovered on stalagmites in the Caves of Ardales, near Malaga in southern Spain, were created by Neanderthals about 65,000 years ago, making them possibly the first artists on earth, according to the study published in the Proceedings of the National Academy of Sciences (PNAS) journal.

Modern humans were not inhabiting the world at the time the cave images were made.

The new findings add to increasing evidence that Neanderthals, whose lineage became extinct about 40,000 years ago, were not the unsophisticated relatives of Homo sapiens they been long been portrayed as.

Pigments were made in the caves at different times up to 15,000 and 20,000 years apart, the study found, and dispel an earlier suggestion that they were the result of a natural oxide flow rather than being man-made.

Joao Zilhao, one of the authors of the PNAS study, said dating techniques showed that ochre had been spat by Neanderthals onto the stalagmites, possibly as part of a ritual.

"The importance is that it changes our attitude towards Neanderthals. They were closer to humans. Recent research has shown they liked objects, they mated with humans and now we can show that they painted caves like us," he said.

Wall paintings made by prehistoric modern humans, such as those found in the Chauvet-Pont d’Arc cave of France, are more than 30,000 years old. 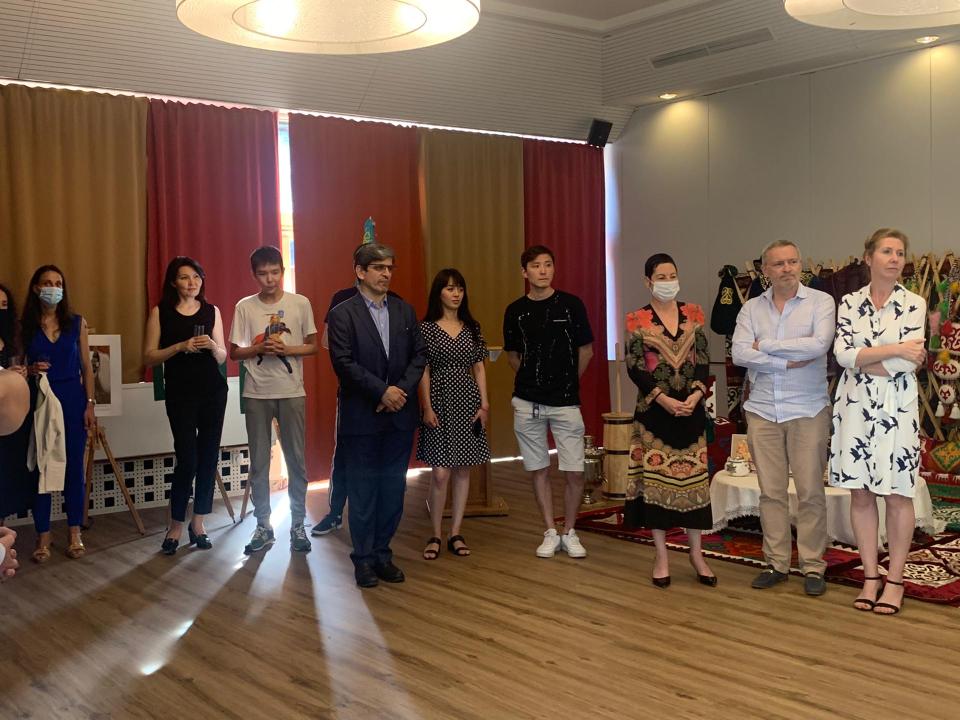 The Kazakh diaspora gathered recently for the meet-up of friends of Kazakhstan and for the exhibition of artworks by young Kazakhstanis called 'The world through the eyes of the children of Kazakhstan'. The event is part of the celebration of the 30th Anniversary of the Independence of Kazakhstan and was attended by representatives of the ministry of foreign affairs of Luxembourg, business and culture circles, public organizations of Luxembourg, as well as Kazakhs living in Luxembourg.

It was organized by the Embassy of Kazakhstan, the Kazakhstan-Luxembourg Association, and the Ayalagan Alaqan, a Public Charitable Foundation from Kazakhstan. Taking into account the importance of preserving and developing ties of the diaspora with Kazakhstan, the meetings of Kazakhs in Luxembourg are becoming a tradition.

During the meeting, Nurgul Tursyn, the president of the Kazakhstan-Luxembourg Association, spoke about the contribution of the Association in promoting the image of Kazakhstan abroad, as well as other events, aimed at enhancing cultural and humanitarian ties between the two countries.

In his welcoming speech, Miras Andabayev, the Minister-Counsellor of the Embassy, noted that the Ayalagan Alaqan Foundation is carrying out very important work, demonstrating the creativity of Kazakhstani children who are distinguished by special talent, as well as a positive energy coming from their paintings.

The exhibition of drawings of young Kazakhstanis made a strong impression on the guests of the event, who noted that the works of children embody the state of their inner world and the desire to learn. "Looking at these drawings, we can say that these children love their country, city, the animals. They strive to learn about the world around them, and even space," one of the guests noted.

The Ayalagan Alaqan Foundation, led by Rada Khairusheva, has been organizing similar exhibitions around the world in cooperation with the Еmbassies of Kazakhstan in India, the UAE, Armenia, Latvia, France, and is currently working on other exhibitions to familiarize the international community with the creativity of young Kazakhstanis with disabilities and special educational needs. 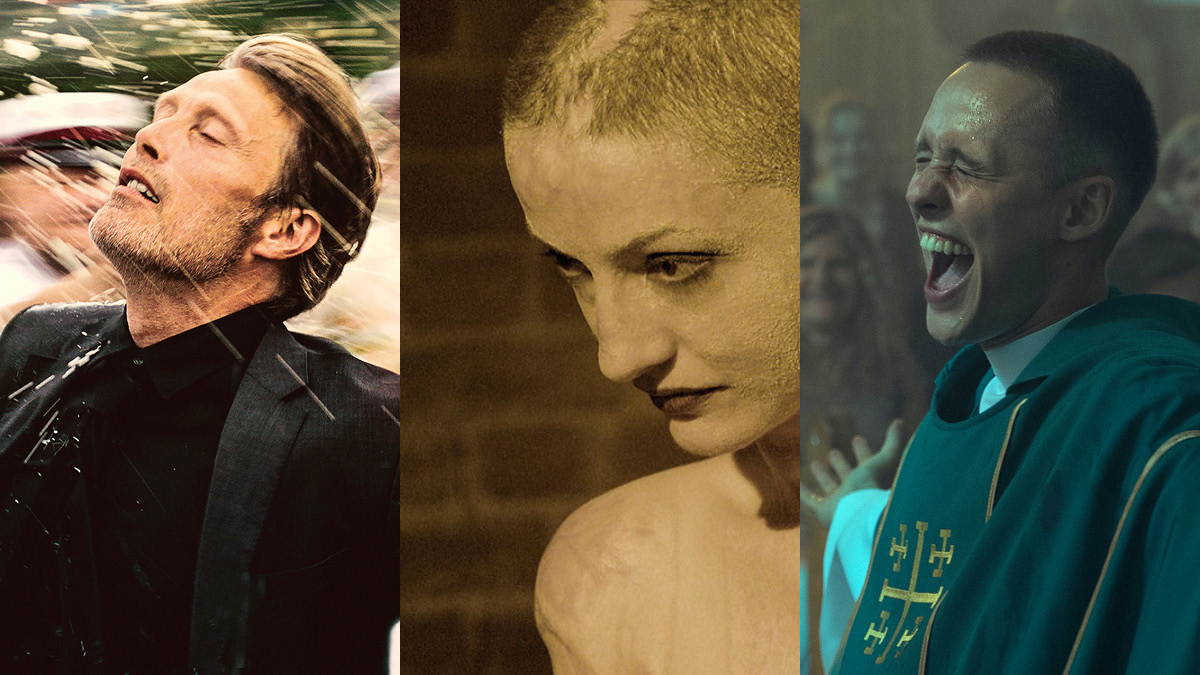 “After the period we have just lived through, the need for people to come together, not only in spaces made for debate, but also in places like cinemas, is growing and urgent," said David Maria Sassoli (S&D, IT)  during the ceremony, which took place in Strasbourg as well as online.

The other two films shortlisted for the award were: Another Round by Danish director Thomas Vinterberg and Corpus Christi by Polish director Jan Komasa.

The final ranking was determined by combining the average rating from the public vote and the vote by MEPs, with each group weighing 50%.

The Covid-19 pandemic has hit the creative and cinema industry hard. Cinema screenings of the three finalists were limited, and were primarily replaced by online screenings and events. Audiences could rate the films until 23 May, MEPs until 8 June.

About the winning film

This stirring documentary is titled after a nightclub in Bucharest where a fire killed 27 young people in 2015 and left 180 wounded. The documentary follows a team of journalists who investigate why 37 of the burn victims died in hospitals, although their wounds were not life threatening. They uncover terrifying nepotism and corruption that cost lives, but also show that brave and determined people can reverse corrupt systems.

Follow the press conference with the winner, the other finalists, the European Film Academy and Sabine Verheyen (EPP, Germany), the chair of the culture committee, from 13.15 to 14.00 CET.

Tune in to our Facebook live with the winner at 14h CET.

With the LUX Audience Award, a unique pan-European audience prize, Parliament teams up with the European Film Academy to reach a wider audience and to continue to strengthen the links between people and politics. Through its film prize, Parliament has been supporting the distribution of European films since 2007, by providing subtitles in 24 EU languages for the films in final contention. The LUX prize has garnered a reputation by selecting European co-productions that engage with topical political and social issues and encourage debate about values.

Find out where you can watch the films nominated for the 2021 LUX Audience Award in your country and how to vote for your favourite, EU affairs.

Thomas Vinterberg’s Oscar winning Another Round, Collective by Alexander Nanau and Corpus Christi by Jan Komasa (nominated for Oscars in 2021 and 2020 respectively) are the three films shortlisted for the European Parliament and European Film Academy’s 2021 LUX Audience Award.

You can watch all three films free during the LUX Audience week from 10 to 16 May online and subtitled into your language.

Catch the live debate with the three directors on Facebook on Friday 14 May from 5pm CET.

Another Round by Danish director Thomas Vinterberg (original title Druk)

Have you heard of a Norwegian psychologist’s obscure theory that a small amount of alcohol in our blood opens our minds, increases creativity and keeps us happy? Four high school teachers experiment with it, but what first seems to offer a cure for a mid-life crisis goes off the rails. Vinterberg‘s movie is not only about drinking. It has a deeper message about how to face life’s highs and lows and be honest about them.

Another Round won the 2021 Oscar for best international feature. Leonardo DiCaprio's production company is planning an English-language remake.

This stirring documentary is titled after a nightclub in Bucharest where a fire killed 27 young people in 2015 and left 180 wounded. The documentary follows a team of journalists who investigate why 37 of the burn victims died in hospitals although their wounds were not life threatening. They uncover terrifying nepotism and corruption that cost lives, but also show that brave and determined people can reverse corrupt systems.

The film is based partly on the real story of a young convict who experiences a spiritual transformation and wants to become a priest. By a twist of fate, he ends up taking responsibility for a parish in a remote Polish village. As the story evolves, he confronts a tragic secret that is devouring the community. Through the story of this charismatic preacher, Komasa reflects on what creates a community and what makes us susceptible to both fake and real leaders.

Corpus Cristi was nominated for an Oscar in the best international feature film category in 2020.

How to take part

This year the winner will be chosen by MEPs and audiences, each group accounting for 50% of the votes. Rate all three films from one to five stars on www.luxaward.eu by 23 May. You can change your rating and only your last vote will be counted. Vote to have the chance to attend the next European Film Awards ceremony in December 2021.

About the LUX Audience Award

The European Parliament launched the LUX Prize in 2007 with the aim of supporting the production and distribution of European films, stimulating reflection on current political and social issues and celebrating European culture.

This year, Parliament teamed up with the European Film Academy, the European Commission and Europa Cinemas network to bring the newly named LUX Audience Award to a wider audience.

All three finalists have been subtitled into the official EU languages. The winning film will also be adapted for the visually and audibly impaired.