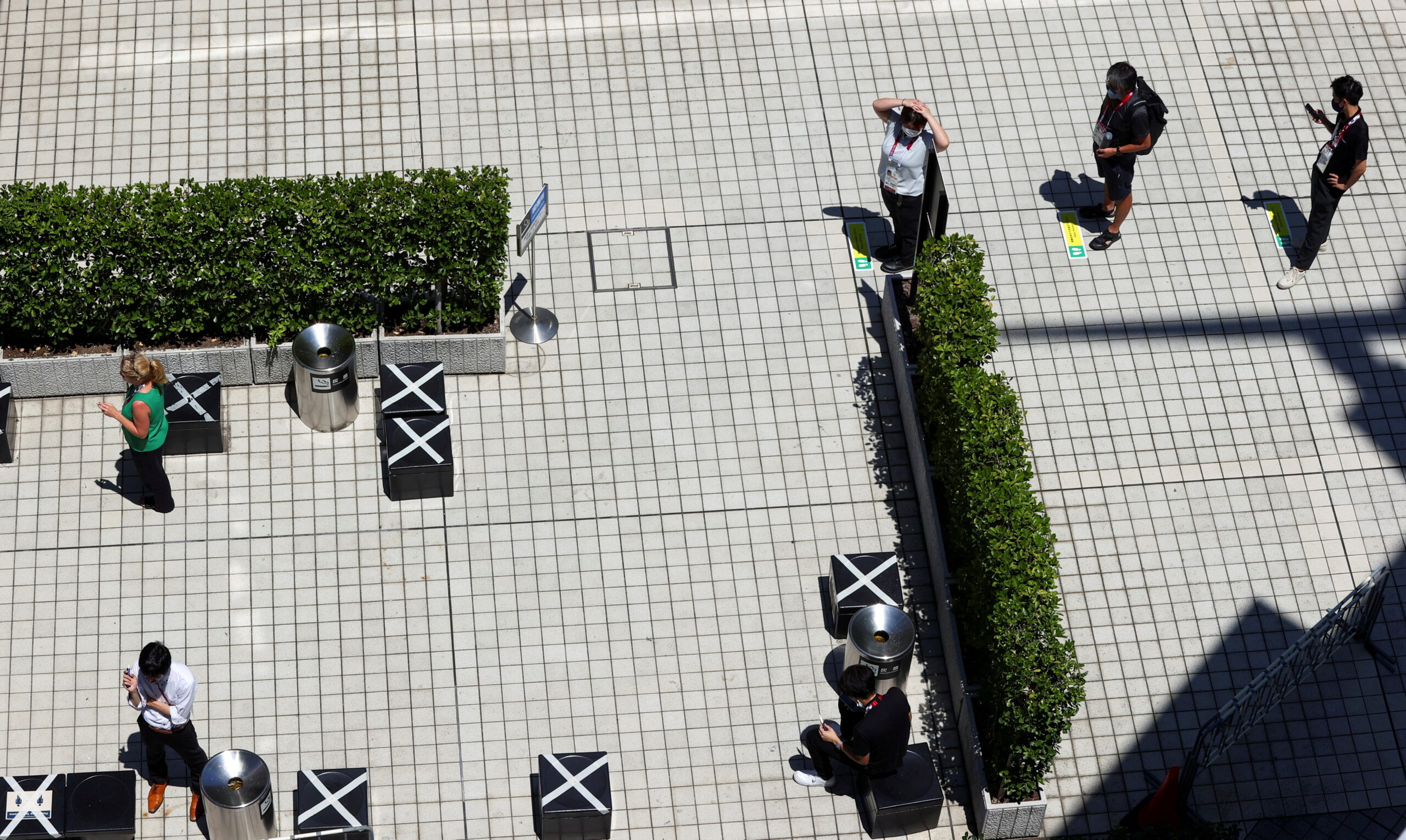 Smokers wait their turn in a queue as they observe social distancing, during a smoke break ahead of the Tokyo 2020 Olympic Games that were postponed to 2021 due to the coronavirus disease (COVID-19) pandemic, in Tokyo, Japan July 22, 2021. REUTERS/Siphiwe Sibeko/File Photo

Japan's government on Friday (30 July) proposed states of emergency through 31 August in three prefectures near Olympic host Tokyo and the western prefecture of Osaka, as COVID-19 cases spike to records, overshadowing the Summer Games, write Makiko Yamazaki and Linda Sieg.

Existing states of emergency for Tokyo - its fourth since the pandemic began - and southern Okinawa island should also be extended to 31 August, Economy Minister Yasutoshi Nishimura, who is spearheading Japan's pandemic response, told a panel of experts in announcing the proposed expansion.

Prime Minister Yoshihide Suga is expected to formally announce the move later on Friday after the experts approved it.

Japan has avoided a devastating COVID-19 outbreak, but is now struggling to contain the highly transmissible Delta variant, with daily cases nationwide topping 10,000 for the first time on Thursday (29 July), media reported.

Japan has imposed a series of "state of emergency" declarations, but the orders are mostly voluntary, unlike other countries which impose strict lockdowns.

Many people have grown weary of the stay-home requests, with some bars refusing to adhere to service restrictions, and Japan's vaccination rollout lags.

Health Minister Norihisa Tamura said the country had entered a new "extremely frightening" stage as cases are spiking even though the movement of people was not increasing, and said the highly transmissible Delta variant was a big factor.

"I think that people cannot see ahead and, worrying how long this situation will last, they find it unbearable that they cannot return to normal daily life," he told the panel.

The surge in COVID-19 cases is bad news for Suga, whose support rates are already at their lowest since he took office last September and who faces a ruling party leadership race and general election later this year.

Tokyo announced a record 3,865 daily infections on Thursday, up from 3,177 a day earlier. The surge is beginning to strain the medical system, with 64% of Tokyo's hospital beds available for serious COVID-19 cases already filled as of Wednesday.

Suga and Olympics organisers have denied there is any link between the July 23-Aug. 8 Summer Games and the recent sharp spike in cases.

Unlike the voluntary restrictions and low vaccination rates elsewhere in Japan, the Olympic village in Tokyo for athletes and coaches boasts more than 80% vaccination, testing is compulsory and movement is stringently curtailed.

Athletes and other attendees from around the world must follow strict rules to prevent any spread of the virus within the "Olympic bubble" or to the wider city. Spectators are banned from most venues.

But experts worry holding the Games has sent a confusing message to the public about the need to limit activities.

Less than 30% of residents of Japan are fully vaccinated. Nishimura repeated that all those who want to get vaccinated should be able to do so by October or November.