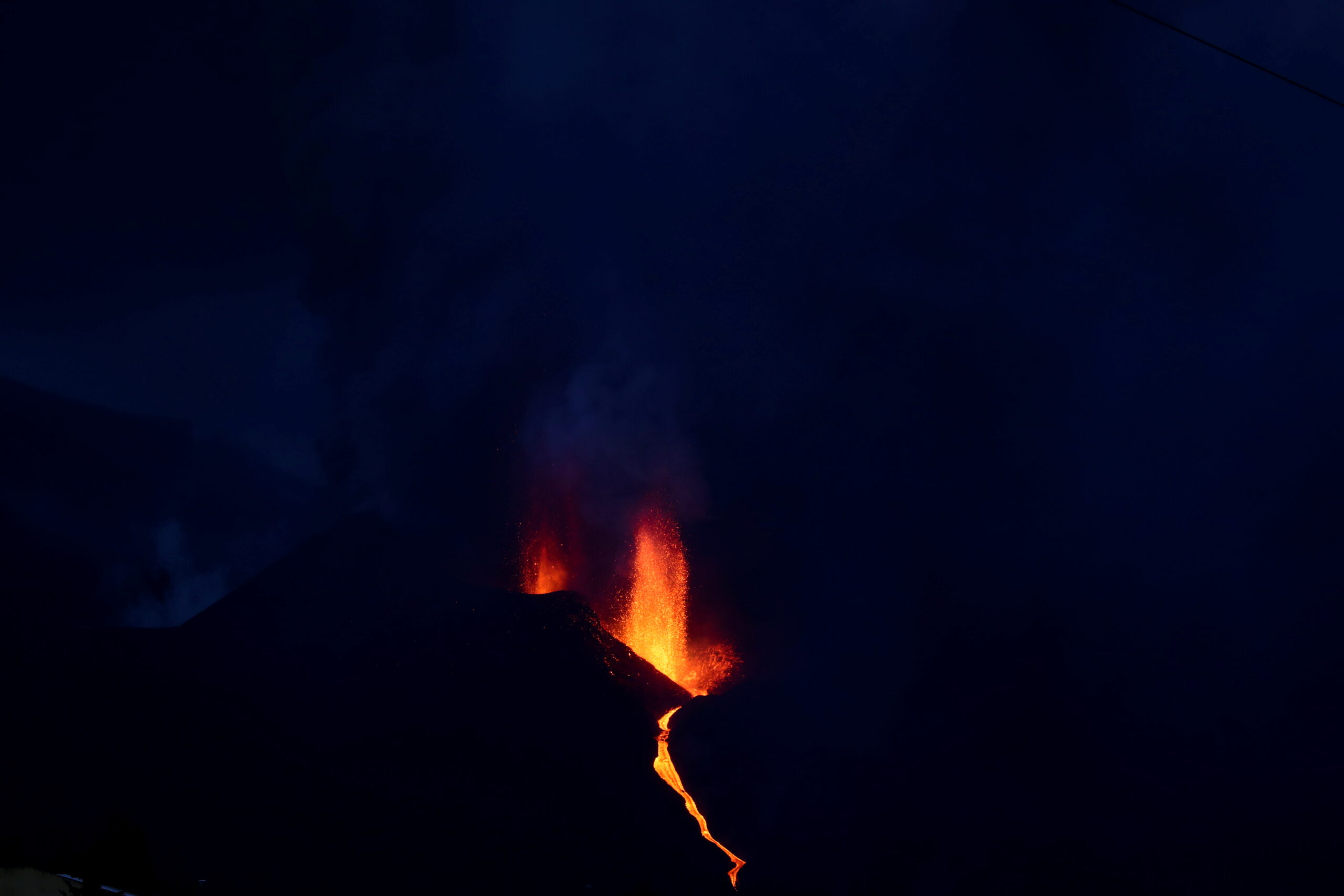 More than 700 residents were ordered to abandon their homes on Tuesday (12 October) on the Spanish island of La Palma as red-hot lava advanced towards their neighbourhood, write Bart Biesemans and Silvio Castellanos.

As the river of molten magma descended from the Cumbre Vieja volcano in the northeast of the Canary Island, authorities ordered between 700 and 800 inhabitants of La Laguna to leave home with their belongings and pets, according to the Canary Islands Volcanic Emergency Plan (Pevolca).

"We want to pick up documents and other things because our whole life is in that house and we cannot collect over 30 years in five minutes," Enrique, 50, a Spanish home-owner, told Reuters.

Authorities gave homeowners until 1800 GMT to collect their things.

"We have been obliged to evacuate a new area. The lava is advancing slowly. People should have time to take their documents, their personal items and anything of value," said Miguel Angel Morcuende, technical director of Pevolca.

There were 64 seismic movements on Tuesday, the strongest measuring 4.1, the Spanish National Geological Institute said.

The Cumbre Vieja volcano spews lava and smoke as it continues to erupt on the Canary Island of La Palma, as seen from Tacande, Spain, October 12, 2021. REUTERS/Sergio Perez

La Palma airport remained open but 11 flights were cancelled on Tuesday and others were delayed, airport operator AENA (AENA.MC) said.

Earlier on Tuesday, officials lifted a lockdown ordered because of a cloud of smoke over two villages caused by the eruption, allowing more than 3,000 residents to go outside.

Lava gushing from the volcano engulfed a cement plant on Monday, raising clouds of smoke and prompting authorities to instruct people in the area stay at home. read more

Lava from the eruption that began on Sept. 19 has laid waste to nearly 600 hectares in total, authorities said.

After the volcano's cone partially collapsed on Saturday, a new river of lava streamed towards the sea, devouring banana and avocado plantations and most of the remaining houses in the town of Todoque.

Torrents of molten rock have destroyed 1,186 buildings in the three weeks since the eruption, the Canary Islands Volcanic Institute said, and forced the evacuation of about 6,700 people.Reporting by Graham Keeley, Silvio Castellanos, Bart Biesemans 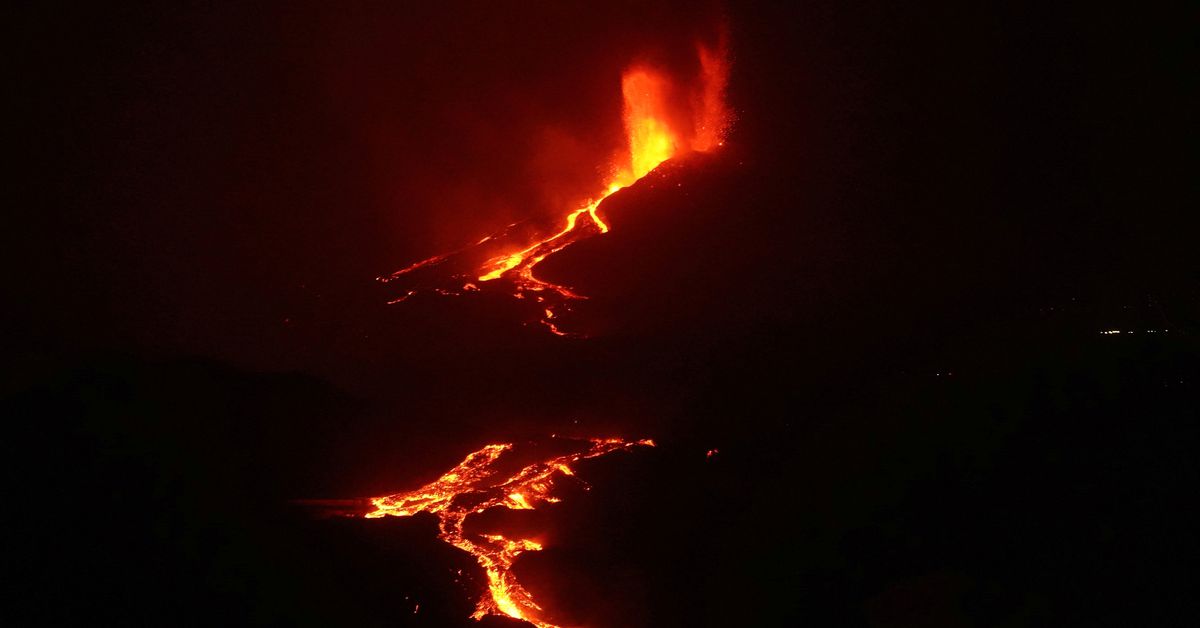 A river of red-hot lava gushing from the Cumbre Vieja volcano on Spain's La Palma thickened on Monday (4 October), after the north side of the crater collapsed the previous night causing spectacular explosions, but authorities ruled out further evacuations, write Borja Suarez and Marco Trujillo.

Despite the heightened activity, the lava appeared to be following a similar trajectory to previous flows and avoiding areas that have so far been spared, Canary Islands' regional president Angel Victor Torres said.

"We had to order a few lockdowns because of the air quality, but we are not planning to evacuate more people," he said in an interview to TV channel TVE on Monday morning.

Torres said the volcano had emitted roughly three times the material expelled during the island's last major eruption in 1971, in a quarter of the time.

He added that his administration planned to buy around 300 houses to accommodate those who lost their homes and said it was too early to tell how great the total damage would be.

"We're still in the middle of this...if the lava keeps springing up in the same quantities we saw last night, the damage is going to be greater," Torres said.

Roughly 1,000 buildings have been destroyed since the eruption began on 19 September and 6,000 people have been evacuated, mostly from the towns of El Paso and Los Llanos de Aridane, two of the main population centres in the island of 83,000 people.

While visiting the island over the weekend, Prime Minister Pedro Sanchez pledged €206 million in aid to help rebuild and insisted La Palma was safe for tourism. Read more. 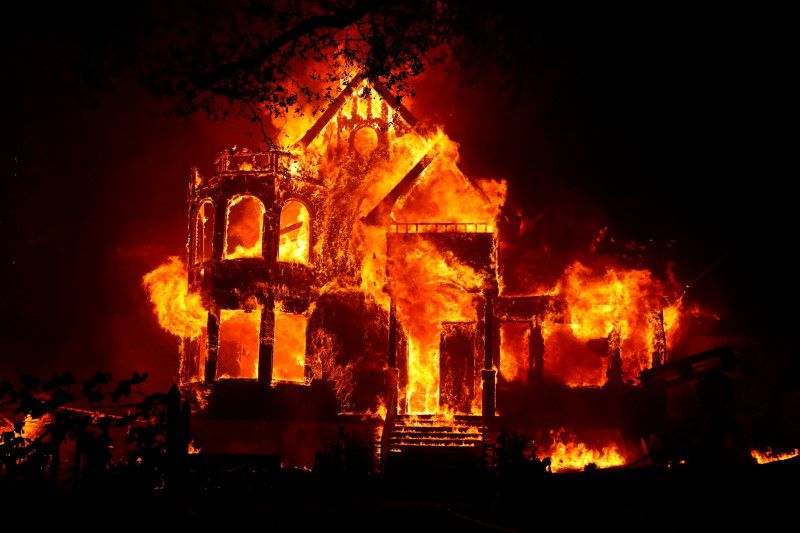 The Commission has approved a new project to support to Greece through the Technical Support Instrument (TSI) to help the country tackle the natural disaster of the recent wildfires. The request for support has been submitted by the Natural Environment & Climate Change Agency (NECCA) of the Greek Ministry of Environment and Energy. The support aims at recovering and halting the potential biodiversity loss in the northern part of the Greek island of Evia.

Cohesion and Reforms Commissioner Elisa Ferreira said: “Wildfires have caused devastation in this part of Greece. The Commission is here to help and once again the Technical Support Instrument demonstrates its flexibility in helping member states to recover from natural disasters and restore natural capital. This is a powerful instrument tailored on member states' needs that can be used upon request on a variety of sectors and issues and that can help all member states achieving their reform objectives.”

In particular, support measures will include new guidelines to address wildfires' impact on Evia's ecosystems and the building up biodiversity hotspots based on EU good practices. Moreover, the project will produce useful recommendations for setting up a hub of experts to provide scientific and technical support in designing and implementing support measures to local authorities.

The TSI offers expertise to all EU countries for the implementation of growth-enhancing reforms. The support offered by the Commission is based on request and is tailor-made for the beneficiary member state. Since 2017, the Structural Reform Support Programme and the TSI have been supporting over 1,000 reform projects in all 27 member states. 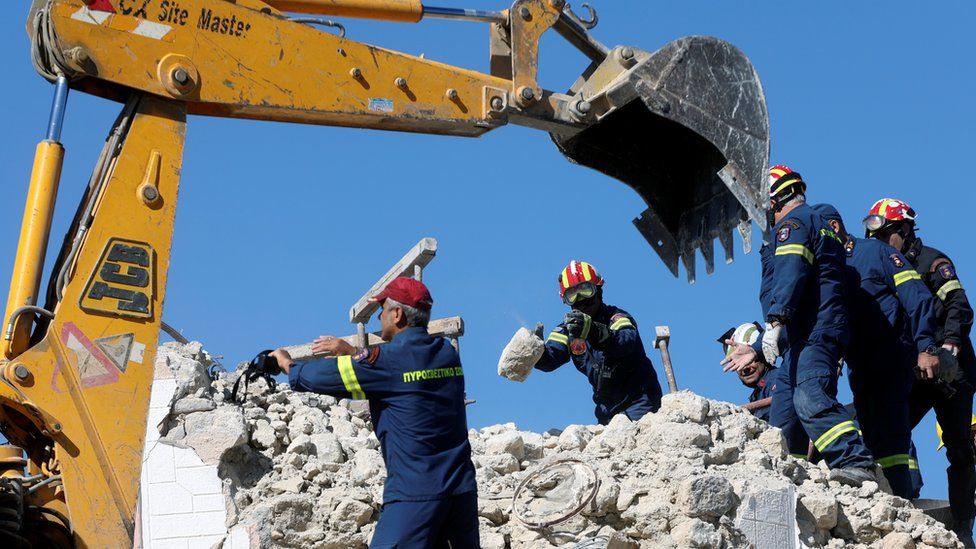 At least one person has been killed and several injured after a 5.8-magnitude earthquake hit the Greek island of Crete, local officials say, writes BBC News.

The man died when the dome of a church that was being renovated in the town of Arkalochori caved in.

Many buildings were damaged and some reduced to piles of rubble from the initial quake and strong aftershocks.

People who live in damaged, older buildings are being advised to stay outdoors.

Some 2,500 tents were set up to house those who could not safely return to their homes on Monday, government minister Christos Stylianidis told Greece's Ant1 news.

He also declared a state of emergency in the Heraklion region - where Arkalochori is located.

British woman Millie Mackay and her nine-year-old daughter Eleni are on holiday in Crete and were in their ground floor hotel room when the earthquake hit.

"Glasses started smashing so we ran outside by the pool," Ms Mackay told the BBC.

"There the bosses guided us to a place of safety... [The manager] was then calling out room numbers and checking if everyone was out and OK."

Local resident Evangelia Christaki told AFP news agency that she had just enough time to grab her husband, who has a disability, and run outside as her house shook.

"Fortunately, our home was not too badly damaged," she said. "But the authorities have told us to stay outdoors over the next hours. In any case, we are so scared."

The small farming town of Arkalochori, located about 30km (18 miles) from the island's capital Heraklion, was particularly badly hit by the earthquake.

Local media is reporting that safety inspections are now under way, with members of Greece's disaster response unit flown in with sniffer dogs and specialised rescue equipment.

"This is not an event that occurred without warning," seismologist Gerasimos Papadopoulos said on Greece's state broadcaster, ERT.

"We have seen activity in this region for several months. This was a strong earthquake, it was not under sea but under land and affecting populated areas," he added.

The European Mediterranean Seismological Centre (EMSC) initially recorded a magnitude of 6.5 while the United States Geological Survey (USGS) put it at 6.0.

The Athens Geodynamic Institute later said the 5.8 quake struck 23km (14 miles) north-west of the coastal village of Arvi, at a depth of 10km.

Both Greece and Turkey sit on fault lines and earthquakes are common.