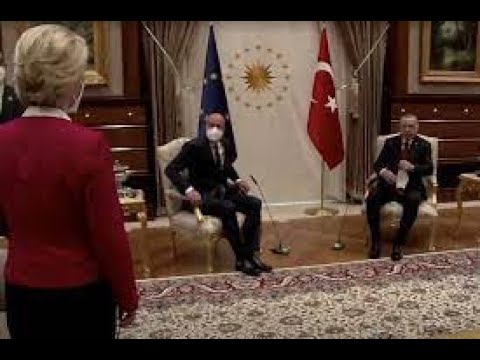 Today (26 April) European Commission President Ursula von der Leyen made a strong statement on her treatment during her visit to Ankara to meet with Turkish President, Recep Tayyip Erdogan, with the European Council president to discuss EU-Turkey relations.

The statement was part of a joint briefing to MEPs with European Council President Charles Michel on the recent EU summit and the controversial EU-Turkey meeting where the Commission president was denied equal standing with her peer, in an incident referred to as “sofagate” where Von der Leyen was offered a place on a sofa, while Michel and Erdogan sat on chairs.

She said: “In the pictures of previous meetings, I did not see any shortage of chairs, but then again I did not see any women in these pictures either. Many of you will have had quite similar experiences in the past, especially the female members of this house. I'm sure you know exactly how I felt hurt and I felt alone as a woman and as a European, because it is not about seating arrangements or protocol. This goes to the core of who we are. This goes to the values our union stands for. And this shows how far we still have to go before women are treated as equals always and everywhere.”

Von der Leyen acknowledged that she was in a privileged position compared to other women and underlined how it was even more important that she spoke up for those women who are not heard: “When I arrived at the meeting, there were cameras in the room. Thanks to them, the short video of my arrival immediately went viral and caused headlines around the world. There was no need for subtitles. There was no need for translations, the images spoke for themselves.

“We all know that thousands of similar incidents go unobserved, nobody ever sees them or hears about them, because there is no camera, because there is nobody paying attention. We have to make sure that these stories are told and that they are acted upon.”

Von der Leyen used the meeting in Ankara to reiterate her concerns about Turkey withdrawing from the convention, but added that to be credible all EU states need to ratify the convention. At this moment Bulgaria, Hungary and Poland are among the countries that have opposed formal ratification. Von der Leyen said that she would like the EU itself to become a signatory.

Related Topics:featured
Advertisement
Up Next 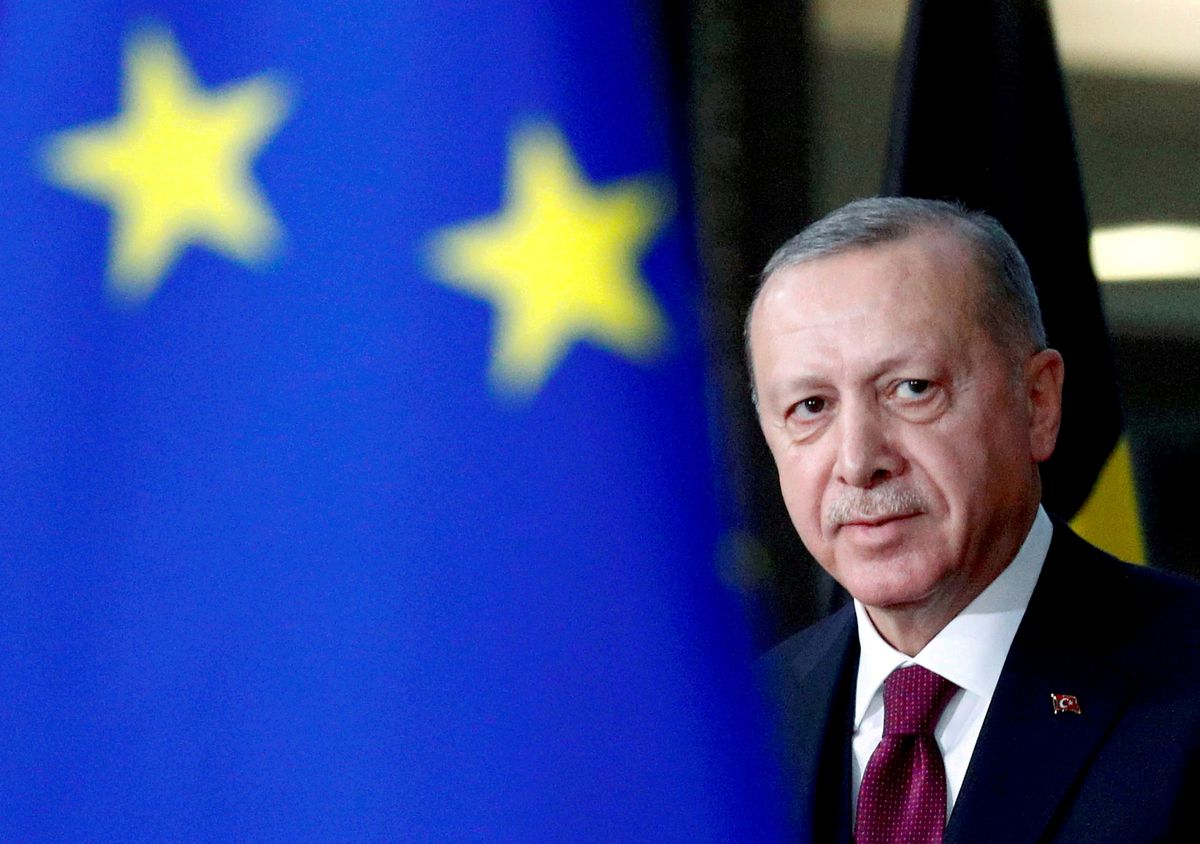 Turks will be required to stay mostly at home under a nationwide "full lockdown" starting on Thursday (29 April) and lasting until 17 May to curb a surge in coronavirus infections and deaths, President Tayyip Erdogan (pictured) announced on Monday (26 April).

Turkey logged 37,312 new COVID-19 infections and 353 deaths in the last 24 hours, health ministry data showed, sharply down from mid-April but still the world's fourth highest number of cases and the worst on a per-capita basis among major nations.

Announcing the new measures after a cabinet meeting, Erdogan said all intercity travel would require official approval, all schools would shut and move lessons online, and a strict capacity limit would be imposed for users of public transport.

Turks will have to stay indoors except for essential shopping trips and urgent medical treatment. Certain groups including emergency service workers and employees in the food and manufacturing sectors will be exempt.

"At a time when Europe is entering a phase of reopening, we need to rapidly cut our case numbers to below 5,000 not to be left behind. Otherwise we will inevitably face heavy costs in every area, from tourism to trade and education," Erdogan said.

The measures will be implemented "in the strictest manner to ensure they yield the results we seek", he said.

Two weeks ago Turkey announced a night-time curfew from 7 p.m. till 5 a.m. on weekdays, as well as full weekend lockdowns, after cases surged to record levels, but the measures proved insufficient to bring the pandemic under control.

Total daily cases in Turkey peaked above 63,000 on April 16 before dropping sharply to below 39,000 on Sunday.

The total death toll in Turkey, a nation of 84 million, stood at 38,711 on Monday, the health ministry data showed. 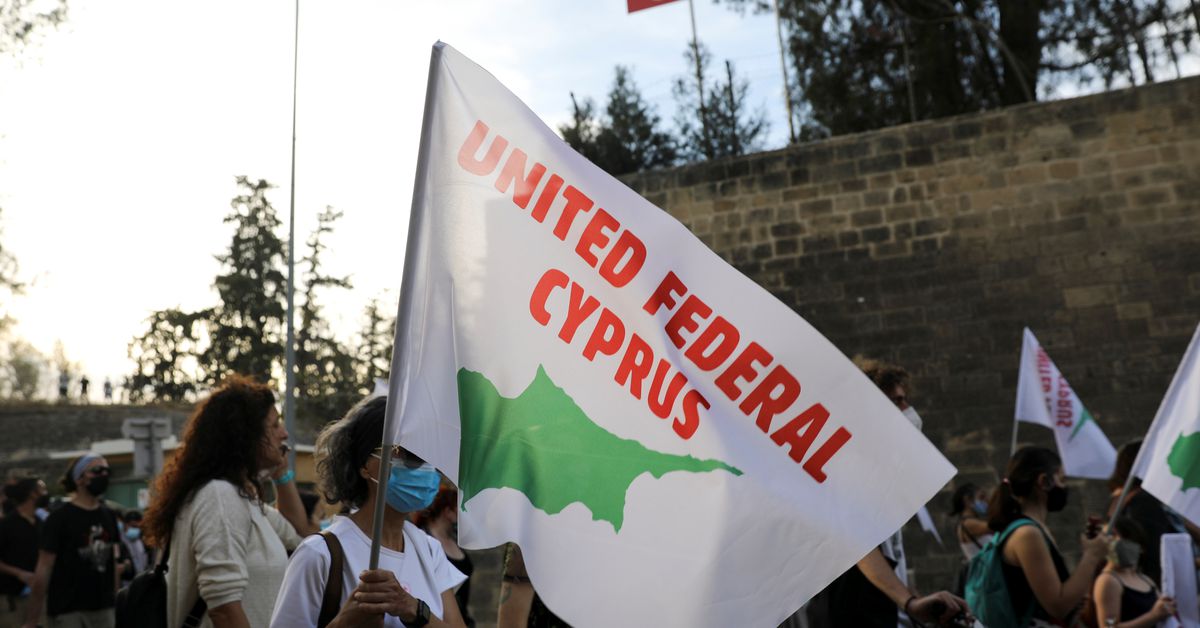 Thousands of Cypriots from both sides of a dividing line splitting their island marched for peace on Saturday, ahead of informal talks in Geneva next week on the future of negotiations.

With some holding olive branches, people walked in the bright spring sunshine around the medieval walls circling the capital, Nicosia.

The routes stopped at semi-circles on either side, at barbed wire thrown up decades ago when conflict split Cyprus's Greek and Turkish Cypriot communities.

"Cyprus belongs to its people," demonstrators chanted, holding placards in Greek and Turkish.

Activists also called for the opening of checkpoints between the two sides, which have effectively been sealed for little over a year because of the COVID-19 pandemic in a disruption to the lives of thousands used to more regular interaction between the two communities after restrictions were eased in 2003.

"The world is going though extraordinary times and sometimes people have been using this excuse to justify the closure of crossings, and on such a small island with no land borders with anywhere else," said Kemal Baykalli, a member of the grassroots platform Unite Cyprus Now, one of many organisations that participated in Saturday's event.

"What could have been done is open the crossing points for the benefit and welfare of all Cypriots and jointly coordinate the situation, but they didn't do this," he told Reuters.

The United Nations has called for informal talks of parties in the Cyprus dispute in Geneva on April 27-29, in an attempt to look for a way forward in resuming peace talks that collapsed in mid-2017.

Prospects for progress appear slim, with each side sticking to their respective positions. Greek Cypriots say Cyprus should be reunited under a federal umbrella, citing relevant United Nations resolutions. The newly-elected Turkish Cypriot leader has called for a two-state resolution.

Cyprus was split in a Turkish invasion in 1974 triggered by a brief Greek-inspired coup, though the seeds of separation were sown earlier, when a power-sharing administration crumbled in violence in 1963, just three years after independence from Britain.

Discussions in Geneva will also be attended by representatives of Greece, Turkey and Britain, guarantor powers of Cyprus under a convoluted system that granted the island independence.

The Turkish Cypriot activists who demonstrated on Saturday were in favour of a federation.

"We need to fix it," said Baykalli. "We can have a common future and the only way to do this is through a federal arrangement. Its very clear that a two-state solution is not possible."

Ersin Tatar, the president of the Turkish Republic of Northern Cyprus, has urged the international community to acknowledge the existence of two states in Cyprus to help resolve the decades-old dispute between Turkish Cypriots and Greek Cypriots. “We are going to Geneva with a new vision for Cyprus, one based on the realities on the island. There are two peoples with distinct national identities, running their own affairs separately since 1964. Today, they have their own institutions, national assemblies and laws, but sadly there is very little interaction between the two sides. We want to change that and usher in a new era of co-operation and mutual respect, but we need the help of the international community to achieve this,” said President Tatar.

The president was speaking ahead of his trip to Geneva this week for informal talks with the Greek Cypriot leader Nicos Anastasiades and the foreign ministers of the island’s three Guarantor Powers, Turkey, Britain and Greece. The meeting is being held on the invitation of the United Nations Secretary-General António Guterres. Cyprus has been ethnically divided following the outbreak of the conflict in December 1963, when the numerically larger Greek Cypriot partner forcefully seized control of the three-year-old bi-communal partnership Republic of Cyprus. Forced out of government for refusing to forgo their political equality, Turkish Cypriots quickly formed their own administration, which was declared as the Turkish Republic of Northern Cyprus (TRNC) in 1983. CONT.

There have been eleven major plans and initiatives to settle the Cyprus issue since 1964. Eight of these have been based on the ‘bi-zonal, bi-communal’ federal settlement model that was first adopted by the UN in 1977. Turkish Cypriots have accepted every single proposal, while Greek Cypriots have rejected all of them, including the 2004 Annan Plan, which was put to a simultaneous referendum. The Greek Cypriot side also blocked progress at the 2017 Crans Montana Summit, which was named by all parties as “the final attempt” to resolve the issue through the bi-communal, bi-zonal federalism formula. President Tatar was elected on a two-state mandate in October 2020 and wants to redefine the UN parameters to increase the chances of a sustainable settlement deal.

“We’ve had decades of failed federation talks. This is adequate proof that federalism is not an appropriate settlement model for Cyprus. Federalism needs interdependence, mutual trust and most of all strong mutual interests for its establishment and sustenance. These do not exist in Cyprus. “If Greek Cypriots don’t want to share power with us, that’s OK. We can continue to function and stimulate co-operation as two separate States. What is not OK is for Turkish Cypriots to endure ongoing isolation and discrimination. That must stop!” the TRNC President said.

“European nations, Germany among them, took just six years to put the horrors of the Second World War behind them and focus on forging a common future. Yet more than fifty years on from 1963, we have yet to establish good neighbourly relations between the two sides,” said President Tatar. “Even before the pandemic, trade levels and the movement of people across the Green Line was woefully low. We need to change that, to encourage more commercial, cultural and political ties, which can only happen if there is mutual respect and equality,” he continued.

“It’s time for a Cyprus reality-check. Our two States is the legacy of the Cyprus conflict, and suffering and the polarisation of the two peoples will continue as long as the status quo remains. For the sake of future generations and for regional peace and stability, we need to end this dispute, and start normalising relations between the two States of the island. “Turkish Cypriots exist, we have our own State and we have rights. It’s vital the international community acknowledges this and helps us to expand the UN parameters, which in turn will pave the way for a fair and sustainable permanent settlement,” Tatar concluded.