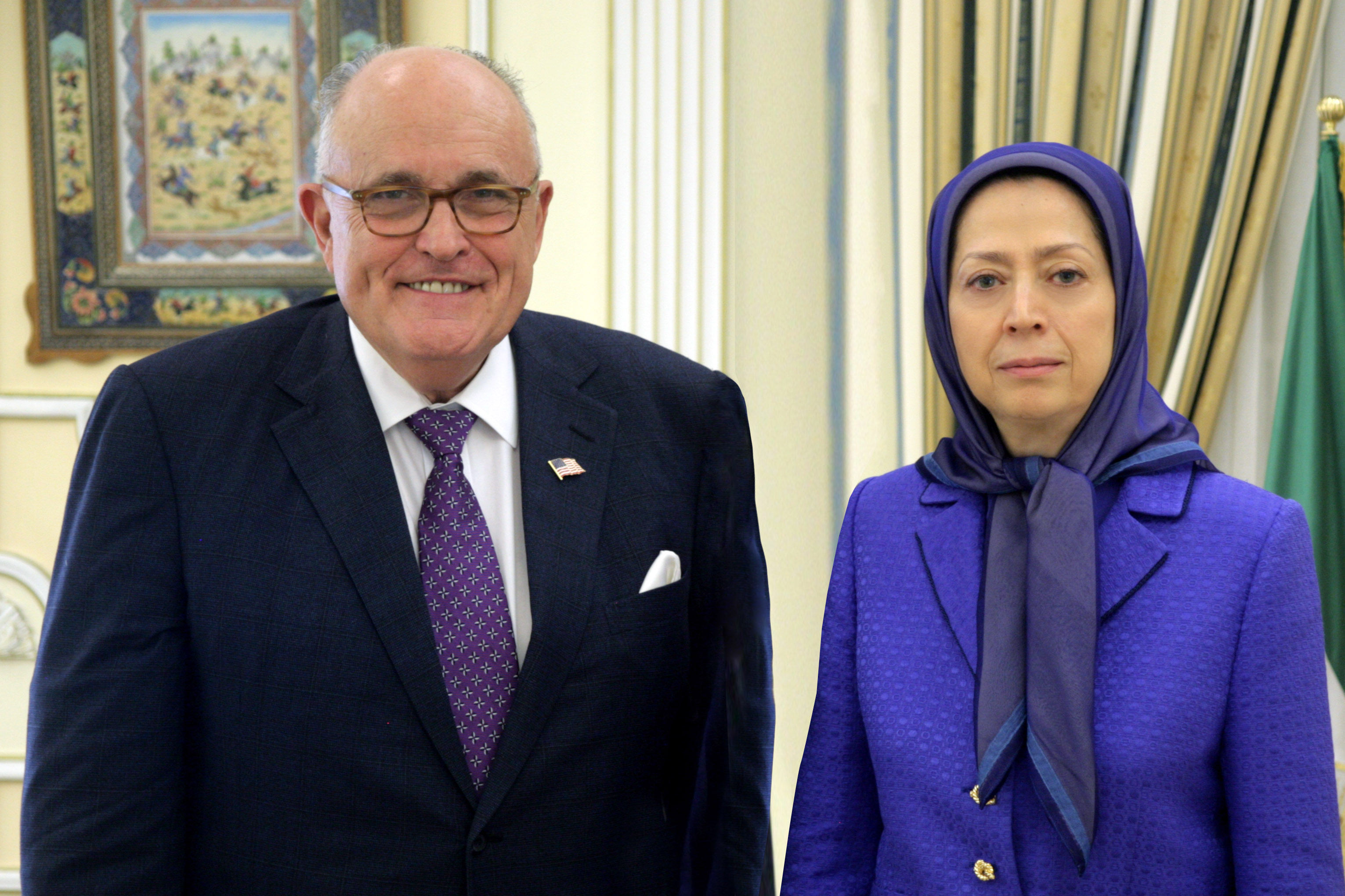 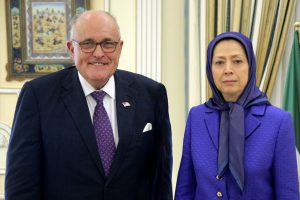 Maryam Rajavi, the President-elect of the National Council of Resistance of Iran (NCRI), met Mayor Rudy Giuliani on Friday, 30 June, at the NCRI headquarters in Auvers-sur-Oise, northwest of Paris.

Mayor Giuliani pointed to the Iranian regime’s malign activities in the region, stressing that the mullahs are the source instability and crisis in the region, and have kept their grip on power in the past 38 years through widespread repression and blatant disregard for human rights at home and the export of extremism and terrorism abroad.

The former New York City Mayor emphasized that the Iranian regime has been the most active state sponsor of terrorism and Islamic extremism in the past three decades, and that Hassan Rouhani has been a key player in pursuing the regime’s ominous objectives, including in the proliferation of Weapons of Mass Destruction. He said despite all the concessions unduly provided to the Tehran, the clerical regime is at a complete impasse and is extremely vulnerable in view of the economic crisis, domestic isolation and a growing power struggle.

There is a growing consensus in the United States that the West’s policy of appeasing the Iranian regime has been a total failure, Mayor Giuliani said. He added that the imperative of formulating a firm policy on Iran, namely standing with the Iranian people and the resistance to bring about change, is becoming more pervasive.

Giuliani expressed his support for Rajavi’s efforts to establish democracy and human rights in Iran, noting that the Iranian Resistance is a viable alternative to the medieval regime ruling Iran.

Giuliani was among 30 former senior US officials and top military commanders who issued a joint statement in support of the Iranian resistance and its objectives.

The statement said in part: “We believe that change is within reach, not only because the regime is becoming engulfed in crisis, but also because there is a large and growing movement organizing for positive change. A viable organization capable of ending the nightmare of religious dictatorship by establishing freedom and democracy, tolerance, and gender equality has steadily gained visibility, popular support and international recognition. Under the leadership of Maryam Rajavi, a Muslim woman standing for gender equality, which is an antidote to Islamic fundamentalism and extremism, it is working every day to bring about a tolerant, non-nuclear Iranian republic based on separation of religion and state, that will uphold the rights of all.”

According to the signatories: “The National Council of Resistance of Iran, pursuing its long journey that began more than a half-century ago, has the vision, leadership and courage to lead the way to the creation of a new Iran. The obligation to stand up to this corrupt and illegitimate regime and say “no more” rests with the Iranian people alone, but the international community must meet its responsibility by condemning the Mullahs’ oppression and embracing the Iranian people’s aspirations for a free and prosperous Iran accepted and respected around the world.”

Giuliani is among dozens of American and European dignitaries who will be addressing the free Iran gathering on Saturday, 1 July 2017 in Paris.

EU states examine whether UK is likely to reverse #Brexit