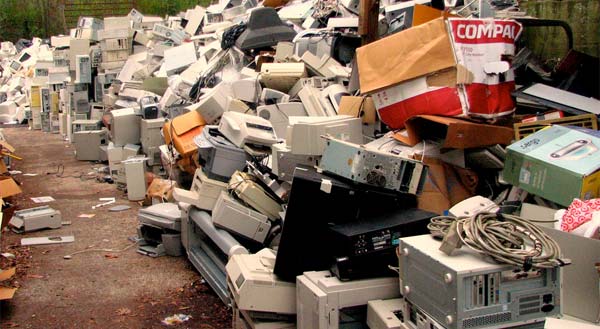 E-waste is the fastest growing waste stream in the EU and less than 40% is recycled. Electronic devices and electrical equipment define modern life. From washing machines and vacuum cleaners to smartphones and computers, it is hard to imagine life without them. But the waste they generate has become an obstacle to EU efforts to reduce its ecological footprint. Read more to find out how the EU is tackling e-waste in its move towards a more circular economy.

Electronic and electrical waste, or e-waste, covers a variety of different products that are thrown away after use.

Large household appliances, such as washing machines and electric stoves, are the most collected, making up more than half of all collected e-waste.

All other categories, such as electrical tools and medical devices, together make up just 7.2% of the collected e-waste.

E-waste recycling rate in the EU

Less than 40% of all e-waste in the EU is recycled, the rest is unsorted. Recycling practices vary among EU countries. In 2017, Croatia recycled 81% of all electronic and electrical waste, while in Malta, the figure was 21%.

Why do we need to recycle electronic and electrical waste?

Discarded electronic and electrical equipment contains potentially harmful materials that pollute the environment and increase the risks for people involved in recycling e-waste. To counter this problem, the EU has passed legislation to prevent the use of certain chemicals, like lead.

Many rare minerals that are needed in modern technology come from countries that do not respect human rights. To avoid inadvertently supporting armed conflict and human rights abuses, MEPs have adopted rules requiring European importers of rare earth minerals to carry out background checks on their suppliers.

What is the EU doing do reduce e-waste?

In March 2020, the European Commission presented a new circular economy action plan that has as one of its priorities the reduction of electronic and electrical waste. The proposal specifically outlines immediate goals like creating the “right to repair” and improving reusability in general, the introduction of a common charger and establishing a rewards system to encourage recycling electronics.

The Parliament is set to vote on an own-initiative report on the circular economy action plan in February 2021.

Dutch Renew Europe member Jan Huitema, the lead MEP on this issue, said it was important to approach the Commission’s action plan “holistically”: “Circularity principles need to be implemented throughout all stages of a value chain to make the circular economy a success.”

He said particular focus should be given to the e-waste sector, as recycling is lagging behind production. “In 2017, the world generated 44.7 million metric tonnes of e-waste and only 20% was recycled properly.”

Huitema also says the action plan could help with the economic recovery. “Stimulating new innovative business models will in turn create the new economic growth and job opportunities Europe will need to recover.

Read more about the circular economy and waste

Brexit: Commission proposes the creation of a Brexit Adjustment Reserve