On April Fool's Day, the head of Rosneft, Igor Sechin, at a meeting with Russian President Vladimir Putin, asked for support in creating an Arctic cluster with the prospect of extracting 100 million tons of raw materials by 2030 - writes James Wilson.

The situation is quite comical, as, according to the businessman, “the cluster may include company projects such as the Vankor, Suzun, Tagul, Lodochnoe fields, a number of projects in Southern Taimyr, including the Yermak project being developed jointly with BP, along with the Khatanga field, if reserves are confirmed". 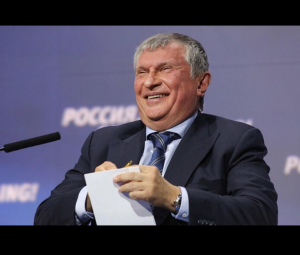 The head of Rosneft mentioned Khatanga only in passing, which causes genuine surprise, especially if one recalls that in mid-2017, when Igor Ivanovich also met with the President, the former showed Putin a core sample from the Khatanga Bay and claimed that Rosneft was “on the verge of discovering a very significant field” with reserves up to 9.5 billion tons of oil equivalent. The core, according to Sechin, was already "stained with oil". Yet it looks like that the stain will only be on the top-management's reputation - as early as May 2018, as Kommersant reported, the company only recorded 81 million tons of oil. Currently, work on the Khatanga field is suspended due to the discovery of the Haeckel Ridge and a particular ocean floor structure, impeding extraction. It looks like the core sample is only useful in the role of a paperweight - it is heavy and does not stain.

Thus, the “prophetic” statements of the state corporation’s leadership on “being on the verge” are quite curious - at first they were "on the verge" in Khatanga, which unfortunately did not turn out to be the case. Now they are on the verge of discovering a new oil and gas province in the Russian Federation, as Sechin’s team has boldly declared in the person of Dmitry Ganichev during the Rosneft Days event at the Kazan Federal University. The company is always "on the verge" of discovery - since it’s a perfect excuse to ask for additional benefits and money. Moreover, according to experts, Arctic exploration has been quite the theme for Rosneft - the company has been planning to drill the Arctic shelf for many years, yet the cost of the project doesn't stand up to scrutiny at all. Offshore drilling is the most complex process in the development of fossil hydrocarbons, especially at depths of more than a kilometre rather than 200–300 m, as in the North Sea. Drilling technologies of high reliability and maintainability are required. But there are none yet.

Perhaps that is why Igor Ivanovich’s predictions tend not to come true. At the end of 2014, Sechin said that the oil market was on the verge of undergoing significant redistribution and that the cost per barrel would amount to of 140-150 dollars in 5-7 years. While the prediction is quite commendable, reality paints a completely different picture. 5 years have passed - the price prediction turned out to be inaccurate and no new market players have appeared. Yet Sechin does not despair and adjusts the forecasts for current realities - in particular, in 2015 the state corporation top manager has predicted the adjusted cost – 100-110 dollars by 2016, in case of reduction in oil production. Wrong guess again. In July 2018, the state corporation estimated the price of oil at around $80 per barrel. The company itself set the cost of $63. But even the adjusted forecast did not hold up - in December we witnessed an average of $53 a barrel for Brent oil.

Even more, Rosneft tends to tackle with various licenses for oil and gas drilling that are, to say the least, illogical and not profitable. For instance, in the fall of 2016 the company abandoned its license to extract oil and gas in Taimyr, for which ten years ago it paid about 100 million dollars at auction. Or in the fall of 2013, Rosneft abandoned another license area located in the immediate vicinity of Vankor, Tukolandsky, with estimated resources of 7 million tons of oil and 5 billion cubic meters of gas. The company also acquired this license at an auction in spring 2006, paying 430 million rubles. (15.2 million dollars) with a starting auction price of 6.5 million rubles (overpayment - 66 times!).

So it turns out that the Rosneft top-management is not a "Baba Vanga" after all. In this regard, a question arises: has the state corporation lost its business acumen in recent years? The financial figures for 2018 are quite ambiguous - on the one hand, the company produced a record level of hydrocarbons, investment and net profit increased, and on the other, debt load and financial expenses increased, the average cost of debt servicing has risen, the share of profitability was significantly less than other major oil companies. Theoretically, if all the following years are as favourable as the year ended 2018, then every year Rosneft will be able to send a maximum of two to three hundred billion rubles to pay off debts. This about as much money that the company can have after capital expenditures, interest payments on existing debts and dividends and various reserves. It is easy to calculate that in this case it will take decades to pay off the debt.

It is possible that the status of a state-owned company in some strange way reduces the effectiveness of its activities. But no – there is an example of Gazprom Neft, also a state-owned company. By extracting 1.9 million barrels of hydrocarbons per day — three times less than Rosneft, Gazprom Neft managed to earn 377 billion rubles in profit, that is, only about one third less than Rosneft’s profit.

However, Sechin did not mention any of this at the meeting, probably due to it being April Fool's Day, and hoping that the harsh reality would be revealed only later. Thus, we can assume that on the day of laughter the top manager of the state corporation once decided play the role of Nostradamus and ask for additional benefits for a project of questionable long-term efficiency. In conclusion, one should ask: isn't it better to step over this “verge of discovery” first? Otherwise, one may stumble over it...