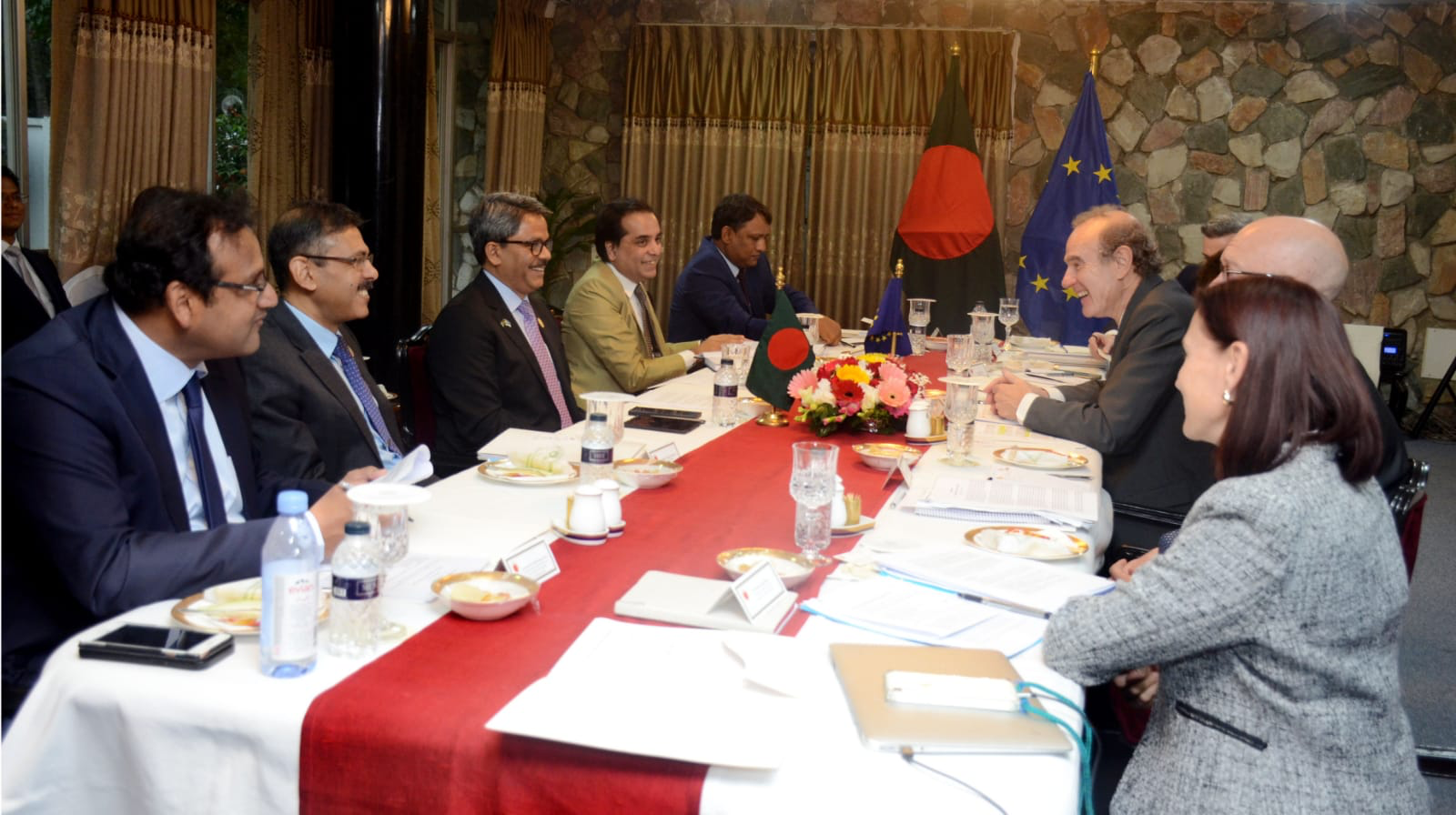 EU-Bangladesh relations have been strengthening for nearly 50 years, since the European institutions first engaged with the newly independent country in 1973. But the Political Dialogue in Dhaka on 24 November marked a widening of cooperation and paved the way to putting the relationship on an even firmer footing, writes Political Editor Nick Powell.

The meeting in Dhaka was the first of what will now be an annual event, a high level Political Dialogue held every year, alternating between Bangladesh’s capital and Brussels. It will provide strategic guidance and intensify foreign and security policy cooperation. Its importance to the European Union was illustrated by the EU’s proposal at the first meeting to initiate discussions on a Partnership Cooperation Agreement with Bangladesh.

It was recognition by the EU of Bangladesh’s socio-economic transformation. The country was commended for its continuing success as the largest beneficiary of the EU’s Everything But Arms preferential trade scheme. Bangladesh sought EU support for continued trade preferences beyond 2029, as it graduates from the status of a least developed country.

The EU responded by stressing the need for the comprehensive implementation of the National Action Plan for labour in Bangladesh, which in turn recognised its commitment to ensuring labour rights and work place safety. This would need fair pricing and shared responsibility for elements of compliance, especially in view of the investment in safer and greener factories.

The Bangladesh delegation was led by State Minister for Foreign Affairs Shahriar Alam and the EU side was led by the Deputy Director of the European External Action Service, Enrique Mora. Their wide-ranging discussion highlighted shared values of democracy, fundamental freedoms, rule of law, inclusiveness and respect for human rights.

The two sides exchanged views on countering terrorism and preventing violent extremism. Bangladesh reaffirmed its zero tolerance approach to all forms of terrorism. Both sides reiterated their joint belief that counter-terrorism actions require adherence to human rights and humanitarian principles.

The discussion widened to the need for deeper cooperation in combating transnational organised crime, including migrant smuggling, human trafficking and money laundering. A comprehensive dialogue on migration is already underway, with the EU intending to launch a Talent Partnership with Bangladesh aimed at boosting international labour mobility in a mutually beneficial manner.

The EU again expressed its appreciation of the generosity of the people and government of Bangladesh towards more than million Rohingya refugees from Myanmar. Bangladesh thanked the EU for its political and humanitarian support but highlighted the potential threat to regional security and stability from the ongoing refugee crisis. More action was needed from the international community to create the conditions for the Rohingyas’ voluntary, safe, dignified and sustainable repatriation.

Bangladesh and the European Union were in agreement on the need to make every effort to end the war in Ukraine, with international law upheld and the UN Charter respected. Both sides were deeply concerned by both the human cost of war and its impact on the global economy. The Prime Minister of Bangladesh, Sheikh Hasina, is one of six eminent world leaders serving as champions for the United Nations Global Crisis Response Group on Food Energy and Finance.

Bangladesh is also the current chair of the UN Peacebuilding Commission and is a leading nation in UN peacekeeping operations. Both sides stressed the important role of women in the prevention and resolution of conflicts, humanitarian responses and post-conflict reconstruction.

Bangladesh commended the EU’s commitment to action on climate change and particularly for facilitating the breakthrough at COP27 on the crucial issue of a compensation fund for the loss and damage suffered by countries, including Bangladesh, which are responsible for only a tiny proportion of global greenhouse gas emissions.

Overall, there were a lot of common interests to discuss, demonstrating the value of the Political Dialogue and the proposed Partnership Cooperation Agreement. There is a common understanding of the need for effective and inclusive rules-based multilateralism for tackling current and future global challenges, with the UN at its core.

Both the EU and Bangladesh attach great importance to a stable trading environment, with the World Trade Organisation at its centre. Both sides agreed to foster new synergies for jointly contributing to a safer, greener, more digital resilient and stable world, in line with the 2030 Agenda for Sustainable Development.

“There is no short cut to working hard”: Leader of Bangladesh Parliamentary Delegation