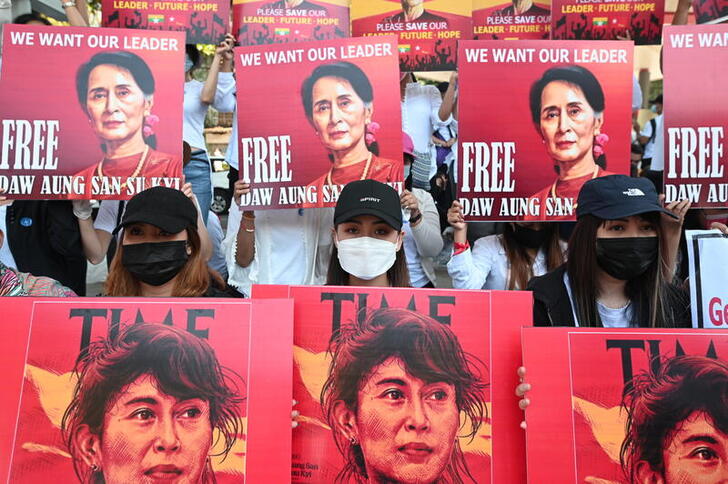 The EU has stepped up its response to assist those in need in Myanmar in the context of the recent military coup, with the allocation of an additional €9 million in emergency humanitarian aid to support the most vulnerable. The critical reinforcement of the EU's response comes on top of a funding package of €11.5m provided at the start of 2021, to support key humanitarian and disaster preparedness needs in the country, bringing EU humanitarian assistance in Myanmar to a total of €20.5m in 2021 so far.

Crisis Management Commissioner Janez Lenarčič said: "The violent military junta that has overthrown the legitimate government in Myanmar has been merciless in killing innocent civilians, in egregious violations of International Humanitarian Law that exacerbates the already dire humanitarian crisis faced by displaced and conflict-affected populations. The EU condemns the despicable acts of violence by the coup d'état, and meanwhile reaffirms its will to continue providing strong humanitarian support through its humanitarian partners directly to the most vulnerable population, who also face recurrent natural hazards that further increase their needs. At this this crucial and pressing time, the EU is showing up for the people of Myanmar by significantly stepping up its support in humanitarian assistance.”

The funding will be used to respond to urgent humanitarian needs in the sectors of emergency health support, protection, food security, and multi-sector emergency assistance. Through this additional allocation, the EU is stepping up its response capacities in the conflict areas in which it is active, and also in urban settings, where indiscriminate violence has been used by the Myanmar security forces. The additional funding will also provide humanitarian assistance to those fleeing fighting between Ethnic Armed Groups and the Myanmar Armed Forces, with funds allocated to address the growing regional implications of the crisis, including in Thailand. All EU humanitarian funding is provided in line with the humanitarian principles of humanity, neutrality, impartiality and independence, and is channelled directly through NGOs, UN Agencies, and the Red Cross. The EU does not provide any humanitarian aid funding to the illegitimate military authorities.

Conflict in Myanmar is marred by widespread violations of international humanitarian and human rights law, resulting in substantial humanitarian needs. More than 336,000 people in Myanmar have been internally displaced, a large majority of whom are in situations of protracted displacement in Rakhine, Kachin, Kayin and Shan states, with limited access to basic services. An estimated 600,000 Rohingya people remain in Rakhine State, of whom around 126,000 are effectively confined to camps or camp-like settings that were established in 2012, and so still cannot move freely. Restricted humanitarian access to several areas hampers the ability of international aid organisations to provide crucial assistance to people in need. Recurrent natural hazards also increase the vulnerability of people living in disaster-prone areas.

Since 1994, the EU has provided €287m in humanitarian aid to Myanmar, with €19m allocated in 2020. The EU works with trusted and independent humanitarian partners to address the protection, food, nutrition and health needs of the most vulnerable people, particularly in Rakhine, Chin, Kachin and Shan states. Following the violence in August 2017, the EU has stepped up its humanitarian assistance in the form of food, nutritional care, health care, water and sanitation, co-ordination, and protection, including mine education. Humanitarian needs are increasing as a result of the 1 February 2021 coup d'état, as security forces use indiscriminate violence against civilians and fighting increases between Ethnic Armed Groups and the Myanmar Armed Forces. 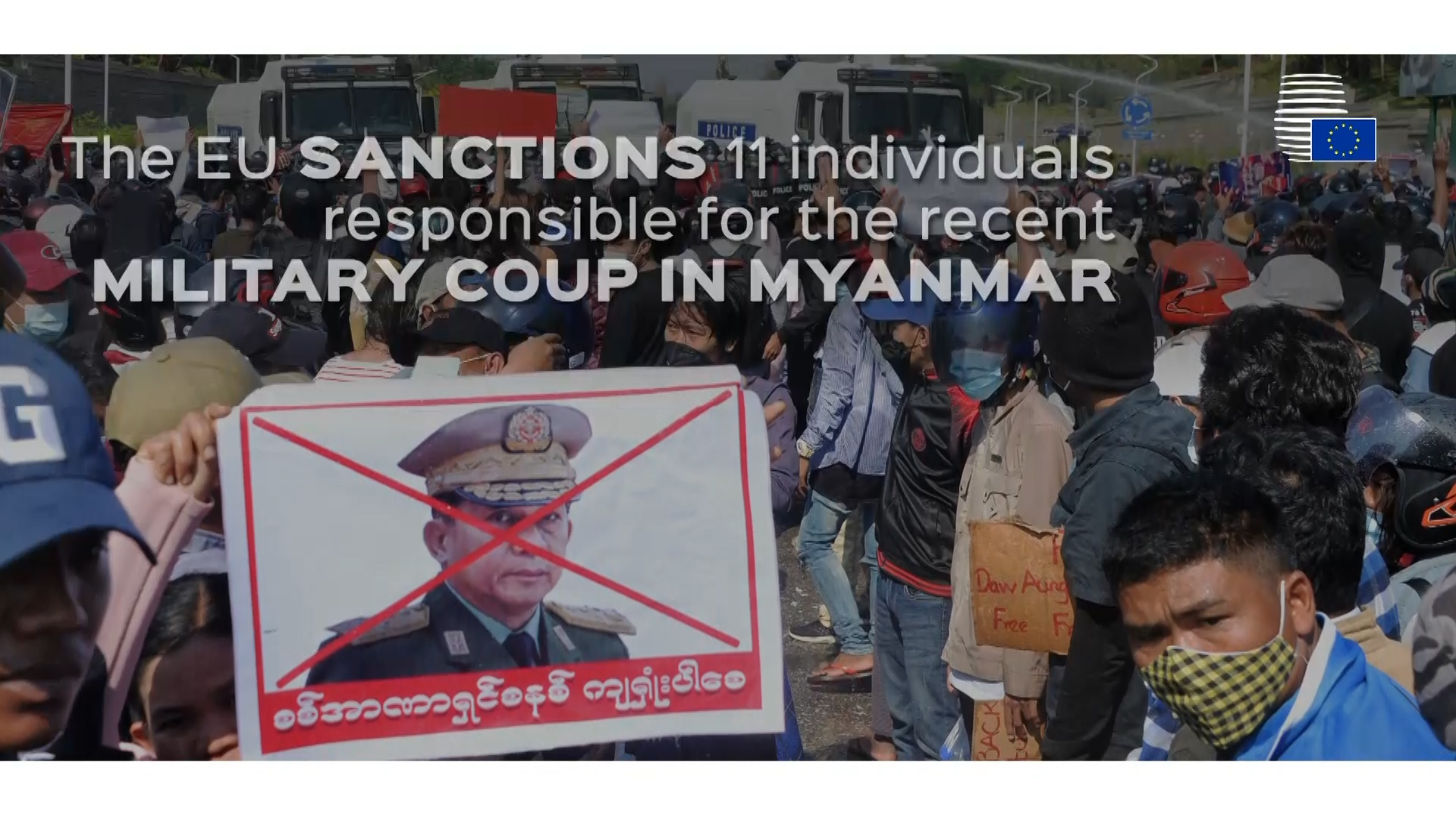 The Council today (22 March) decided to impose restrictive measures on 11 individuals and four entities responsible for serious human rights violations and abuses in various countries around the world.

This is the second time the EU has made use of its new human-rights sanction regime established on 7 December 2020. The first time was the listing of four Russian individuals linked to the protests and arrest of Alexander Navalny.

The violations targeted today include the large-scale arbitrary detentions of, in particular, Uyghurs in Xinjiang in China, repression in the Democratic People’s Republic of Korea, extrajudicial killings and enforced disappearances in Libya, torture and repression against LGBTI persons and political opponents in Chechnya in Russia, and torture, extrajudicial, summary or arbitrary executions and killings in South Sudan and Eritrea. 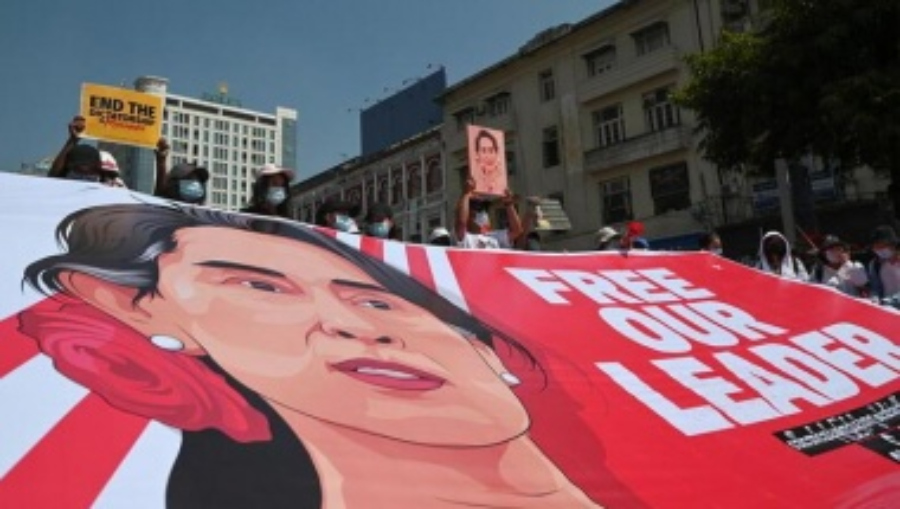 Following the military coup carried out in Myanmar/Burma on 1 February 2021 the EU’s foreign ministers today (22 February) called for de-escalation of the current crisis with an immediate end to the state of emergency, the restoration of the legitimate civilian government and the opening of the newly elected parliament. The EU says it stands with the Burmese people.

They council called again on the military authorities to immediately and unconditionally release President U Win Myint, State Counsellor Daw Aung San Suu Kyi and all those who have been detained or arrested in connection with the coup and said that authorities should exercise maximum restraint and refrain from the use of violence.

While the EU is ready to support dialogue with all key stakeholders to resolve the situation, the Council stated that the EU stands ready to adopt restrictive measures targeting those directly responsible for the military coup and their economic interests.

Though the conclusions state that the EU will continue reviewing all its policy tools as the situation evolves, including its policy on development cooperation and its trade preferences, EU High Representative Josep Borrell, made it clear that he was against cancelling the ‘everything but arms’ trade agreement as it would harm the population, particularly women, and would not have an impact on the military. He said that it was better to target the military and its economic interests.

The EU will continue to provide humanitarian assistance and will seek to avoid measures that could adversely affect the people of Myanmar, especially those people who are in the most vulnerable circumstances. 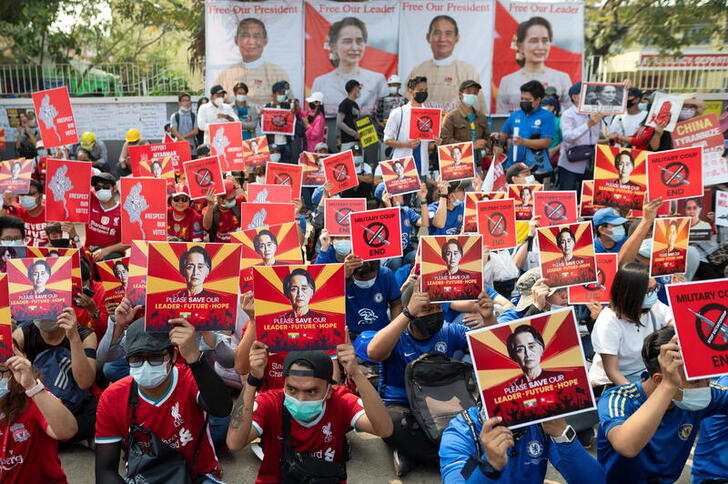 Many thousands of opponents of Myanmar’s 1 February military coup marched on Sunday in towns from north to south, undeterred by the bloodiest episode of their campaign the previous day when security forces opened fire on protesters, killing two, writes Robert Birsel.

Early on Sunday, police arrested a famous actor wanted for supporting opposition to the coup, his wife said, while Facebook deleted the military’s main page under its standards prohibiting the incitement of violence.

The military has been unable to quell the demonstrations and a civil disobedience campaign of strikes against the coup and the detention of elected leader Aung San Suu Kyi and others, even with a promise of a new election and warnings against dissent.

In the main city of Yangon, thousands gathered at two sites to chant slogans, while tens of thousands massed peacefully in the second city of Mandalay, where Saturday’s killings took place, witnesses said.

In Myitkyina in the north, which has seen confrontations in recent days, people laid flowers for the dead protesters.

Big crowds marched in the central towns of Monywa and Bagan, in Dawei and Myeik in the south and Myawaddy in the east, pictures showed.

“They aimed at the heads of unarmed civilians. They aimed at our future,” a young protester in Mandalay told the crowd.

Military spokesman Zaw Min Tun, who is also the spokesman for the new military council, has not responded to attempts by Reuters to contact him by telephone for comment.

He told a news conference on Tuesday the army’s actions were within the constitution and supported by most people, and he blamed protesters for instigating violence.

The more than two weeks of protests had been largely peaceful, unlike previous episodes of opposition during nearly half a century of direct military rule to 2011.

But if the numbers on Sunday are anything to go by, the violence looks unlikely to silence opposition.

“The number of people will increase ... We won’t stop,” said protester Yin Nyein Hmway in Yangon.

The trouble in Mandalay began with confrontations between the security forces and striking shipyard workers.

Video clips on social media showed members of the security forces firing at protesters and witnesses said they found the spent cartridges of live rounds and rubber bullets.

U.N. Special Rapporteur for Myanmar Tom Andrews said he was horrified by the deaths of the two in Mandalay, one of them a teenaged boy.

“From water cannons to rubber bullets to tear gas and now hardened troops firing point blank at peaceful protesters. This madness must end, now,” he said on Twitter.

The state-run Global New Light of Myanmar newspaper said the strikers sabotaged vessels and attacked police with sticks, knives and catapults. Eight policemen and several soldiers were injured, it said.

The newspaper did not mention the deaths but said: “Some of the aggressive protesters were also injured due to the security measures conducted by the security force in accordance with the law.”

Suu Kyi’s National League for Democracy (NLD) condemned the violence as a crime against humanity.

A young woman protester, Mya Thwate Thwate Khaing, became the first death among anti-coup demonstrators on Friday. She was shot in the head on Feb. 9 in the capital, Naypyitaw.

Hundreds of people attended her funeral on Sunday.

Military media said the bullet that killed her did not come from any gun used by police and so must have been fired by an “external weapon”.

The army says one policeman has died of injuries sustained in a protest.

The army seized power after alleging fraud in Nov. 8 elections that the NLD swept, detaining Suu Kyi and others. The electoral commission dismissed the fraud complaints.Slideshow ( 5 images )

Facebook said it deleted the military’s main page, known as True News, for repeated violations of its standards “prohibiting incitement of violence and co-ordinating harm”.

Lu Min has been prominent in demonstrations and is one of six celebrities wanted under an anti-incitement law for encouraging civil servants to join in.

The Assistance Association for Political Prisoners group said 569 people have been detained in connection with the coup.

Western countries that condemned the coup decried the latest violence.

The United States, Britain, Canada and New Zealand have announced sanctions with a focus on military leaders but the generals have long shrugged off foreign pressure.

Suu Kyi faces a charge of violating a Natural Disaster Management Law as well as illegally importing six walkie-talkie radios. Her next court appearance is on March 1