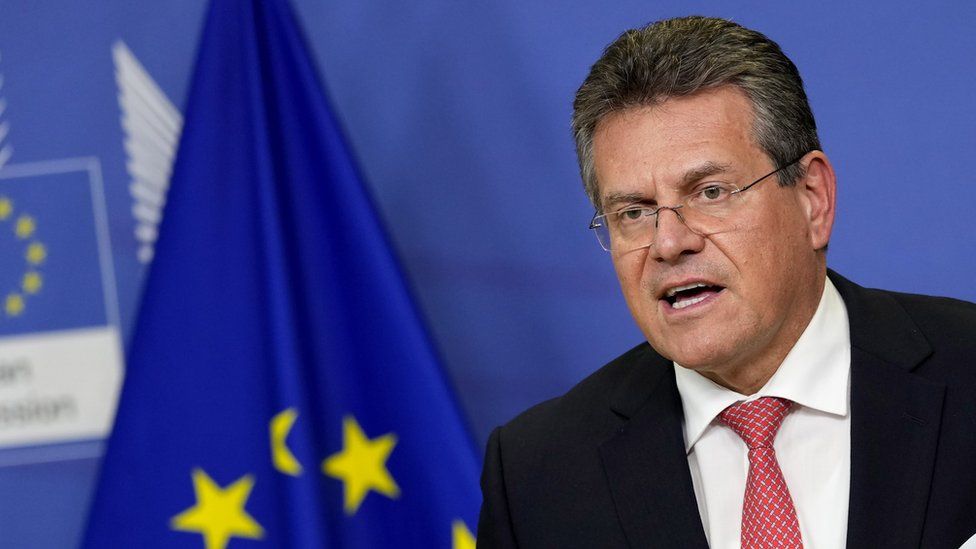 There will be "serious consequences" if the UK triggers Article 16, European Commission Vice President Maros Sefcovic (pictured) has warned, Brexit.

Sefcovic said the move would be "serious for Northern Ireland as it would lead to instability and unpredictability".

His comments follow a meeting with the UK's Brexit minister in Brussels over the protocol dispute.

Lord Frost said progress at the meeting was "limited".

He said gaps could still be bridged through intensive negotiations.

The protocol is the special Brexit deal agreed to prevent a hard border on the island of Ireland.

It keeps Northern Ireland in the EU's single market for goods and allows free-flowing trade with the EU.

But it also creates a trade border between Northern Ireland and Great Britain.

The EU has proposed measures to ease the checks and controls for goods crossing the Irish Sea.

But the UK is demanding fundamental reform and there is growing speculation it will trigger Article 16 - which allows parts of the protocol to be unilaterally suspended if they are causing serious difficulties - in the coming weeks.

'Time running out' on talks

Mr Sefcovic said triggering Article 16 would be serious for EU-UK relations "as it would mean a rejection of EU efforts to find a consensual solution to the implementation of the protocol".

He said that despite a "big move" by the EU on its proposals, "until today we have seen no move at all from the UK side".

Following Friday's meeting, a UK spokesperson said Lord Frost had indicated "the EU's proposals did not currently deal effectively with the fundamental difficulties in the way the protocol was operating".

"He underlined that the UK's preference was still to find a consensual solution that protected the Belfast (Good Friday) Agreement and the everyday lives of people in Northern Ireland," the spokesperson added.

Before the meeting, Lord Frost had warned time was running out on the talks.

He had said the UK was not going to trigger Article 16 on Friday, although this was "very much on the table and has been since July".