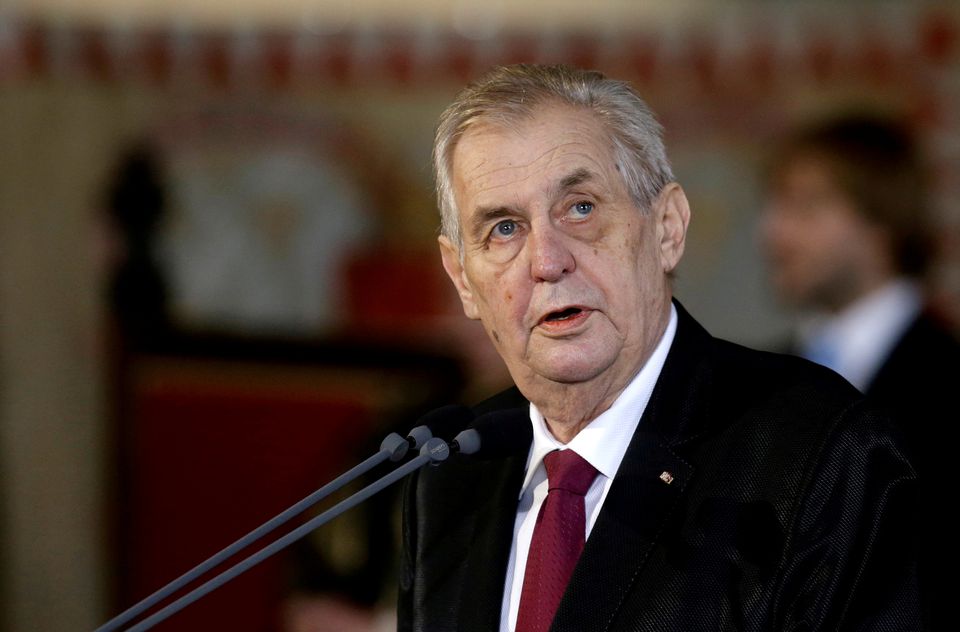 Czech President Milos Zeman (pictured) was in a stable condition in an intensive care unit on Monday (11 October), a hospital spokeswoman said, as his illness delayed the initial steps in post-election talks to form a new government.

The unexpected development complicates efforts to form a new government. Zeman and Babis, who appears to have been weakened by revelations in the Pandora Papers leaks, were expected to meet on Sunday morning in what some opposition members interpreted as a sign that the president might seek to keep the prime minister in power despite the election result. But shortly after the meeting was scheduled to take place, Zeman was seen being transported to a hospital by ambulance.

In a news conference on Zeman’s hospitalization, hospital director Miroslav Zavoral cited “complications accompanying his chronic illness” but did not elaborate on the illness from which the president suffers or whether he was conscious.

Zeman has been reported to suffer from diabetes and neuropathy.

On Monday, the hospital released a brief statement only saying he was in stable condition after being treated in intensive care.

Zeman’s hospitalization adds further uncertainty to the outcome of the election, which left the opposition with a far clearer path than Babis’s party to form a government — but did not fully block the prime minister’s chances of leading a minority government with the support of the president. 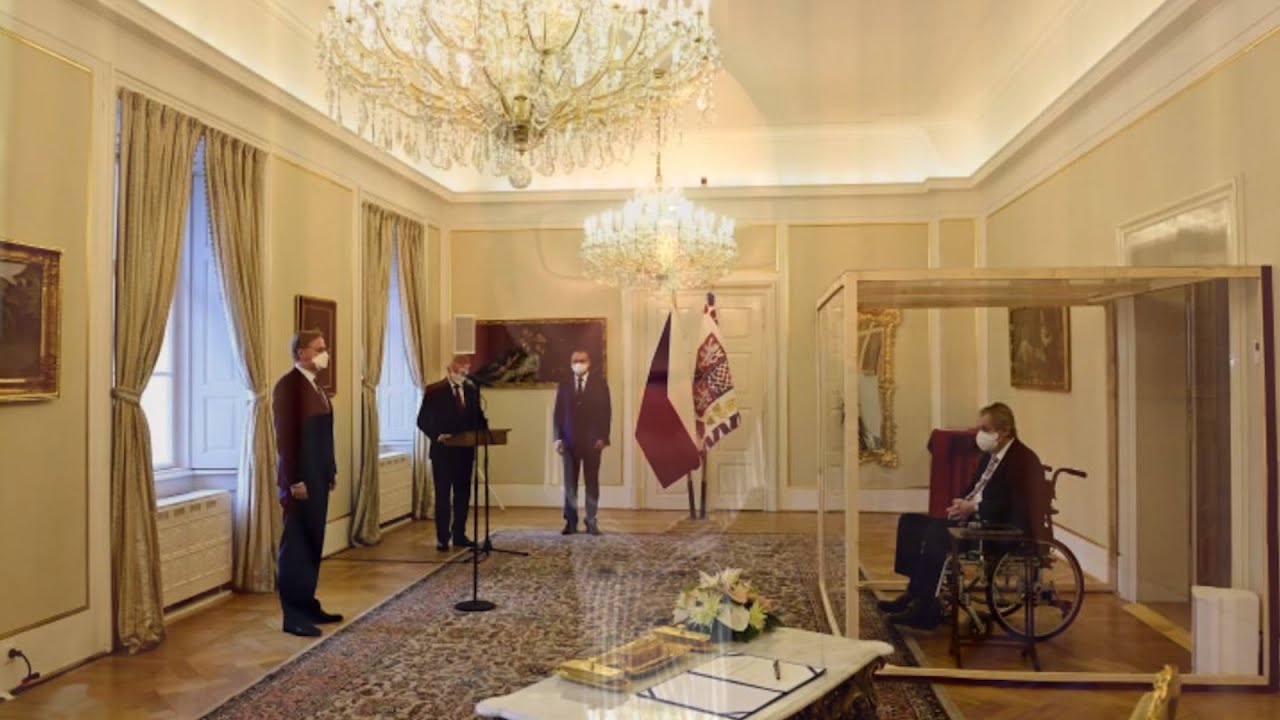 Today (28 November), Petr Fiala has been appointed as Prime Minister of the Czech Republic by President Miloš Zeman. The appointment follows elections where the party in government won the most seats, but where a coalition of opposition parties acted together to form a coalition government*. EU Reporter spoke to former diplomat and former Liberal MEP Petr Ježek about the new government.

EU Reporter (EUR): What do we know about Petr Fiala, the new Czech PM?

PJ (Petr Ježek): Fiala is a well-known and  experienced Czech politician. He was already a member of one of the former governments and the chairperson of the Czech, I would say, Conservative Party, which leads the coalition.

EUR: Is this a stable coalition?

PJ: It remains to be seen. The logic behind cementing this coalition was to bring a change and to topple the populist Prime Minister Andre Babis. There may be some differences between conservatives and liberals within the coalition, but I think that the bottom line is that they want to be responsible and bring the changes which will move the Czech Republic again into the family of normal regular European countries, because with a populist Prime Minister and populist president, it was not the case.

PJ: I think that there are a number of issues which make life difficult for the new government, not not only that they are a partnership of five, but because there is still the president of the Czech Republic (Zeman), who with his aides and collaborators behave unscrupulously. They do whatever they want, regardless of the constitution, that's one problem.

The other is the public service, people who were loyal to the Prime Minister were appointed and not on the basis of their qualifications and quality. So we have a very inefficient public service.

The other problem will be that the opposition in the parliament will be either populists or extremist parties, where every mistake by the government will be used by them. In this respect, there is also a broader dimension [for the wider Visegrad region] that opposition to populist leaders in Hungary and Poland will need to team up and build broader coalition's in order to win, if the Czech Republic's coalition is success story, it will reinforce them, it will help them; but if not it may very well reinforce the populist leaders. So the responsibility is not only for the Czech Republic.

Ježek says there is also quite a legacy for any incoming government.

PJ: First of all, there are pressing issues like the COVID pandemic, the energy prices and the huge budget deficit. These problems are enormous, but this aside there is also the need to deal with the failings of the previous government who failed to modernize the country. They didn’t improve the highways, not to mention new technologies or the green agenda.  So the government faces huge challenges that will not be easy in the face of an opposition made up of populists and extremists.

EUR: Fiala’s party in part of the ECR group which also include the Polish Law and Justice Party, which is challenging the rule of law, in particular through the politicization of the judiciary. Do you think that Fiala will stand behind his Polish colleagues in the ECR group? Or will he take a different position that defends the rule of law?

PJ: I would say that Petr Fiala a realistic person and someone with good intentions. There is a certain legacy in the party of the former chairman Vaclav Klaus, who was Prime Minister and President and he was strongly against the euro and other aspects of closer European Union, which still hangs over the party and I would say that there is still quite a few MEPs, who are part of the ECR group, who share this view, who think that what happens in Hungary and Poland is just a case for the two countries and it has nothing to do with the EU.

I hope that Fiala will bring together strands to transform the party along the lines of regular European right parties on the right, like CDU in Germany, for example, who would like to see all member states observe the rule of law and other commitments. I hope that when he meets his counterparts within the European Council, that it reinforces him, and it helps to shape his views on that issue.

EUR: Petr, I know you from your time as an MEP on the TAX3 Committee, which was set up after numerous scandals, such as LuxLeaks and the Panama Papers. A lot has happened over the last year, what do you think of these developments? And also, we know that one of the most prominent politicians who was mentioned in the most recent leak the Pandora papers was Andre Babis. Is that Is there anything happening about that?

PJ: Well, I think that there's been huge changes not only in the atmosphere, but in the effort to make tax more just, in particular there are the OECD developments on a minimum corporate tax around the world. There is also a huge effort in the EU to eliminate problems related to tax avoidance and tax evasion. I think politicians realized that they must do something. There are some states who are delaying their efforts, but I would say that the pressure is enormous, and sooner or later, the situation will be significantly improved.

PJ: One should know all the details. I think that the French authorities and the US authorities as well, because the US entity was involved, will investigate it all.

For the full interview please watch the video above. 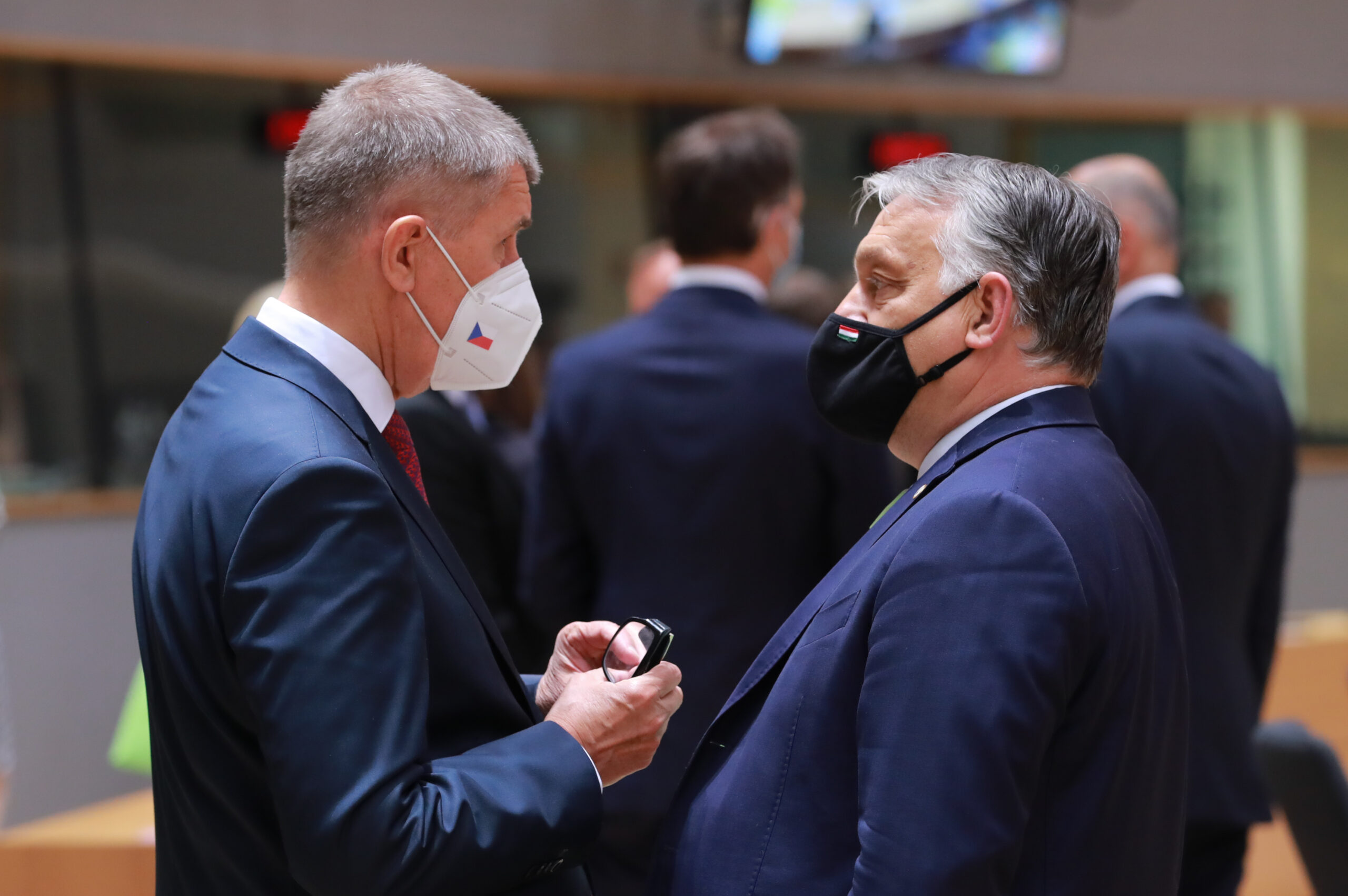 The International Consortium of Investigative Journalists (ICIJ), now famous for a series of investigations uncovering dodgy financial dealings has hit the headlines again, this time with nearly 12 million financial records, linked to 14 offshore service providers, and more than 90 countries and territories.

Among the dealings, Czech Prime Minister Andrej Babiš has been found to have bought a chateau on the French Riviera for $22 million through offshore companies. ICIJ’s Czech partner Investigace.cz found that neither the chateau, nor the companies involved in its ownership, appear in the register of financial interests declared by Babiš as a politician and required by Czech law.

The revelations come just one week before Czech parliamentary elections. Babiš has always positioned himself as a politician who was willing to stand up to tax evasion and increase transparency. He recently invited Hungarian Prime Minister Viktor Orban to help him on the campaign trail, like Orban he has faced accusations of personal enrichment assisted by European funding. Babiš has rejected the allegations, blaming the Czech mafia. 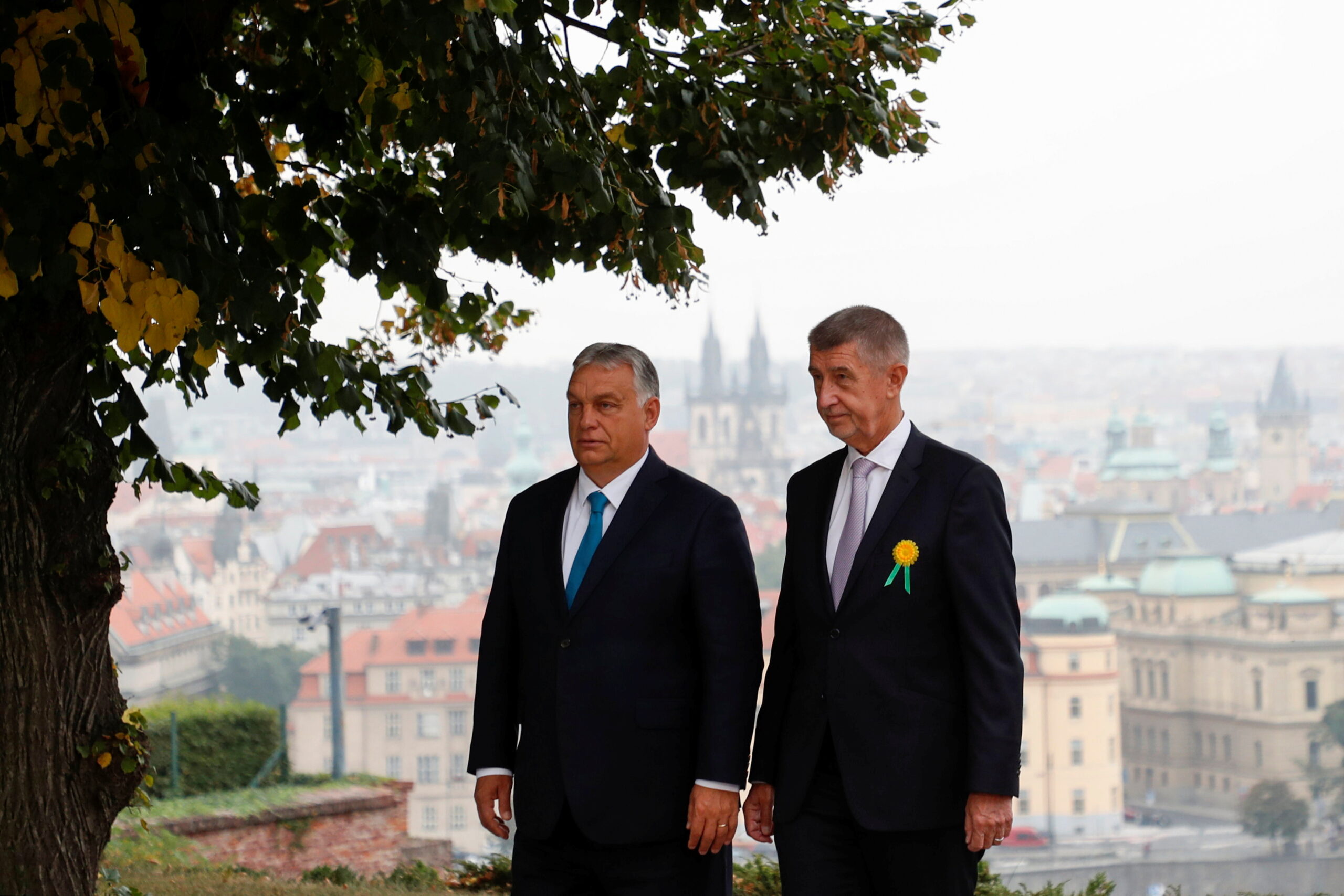 Hungarian Prime Minister Viktor Orban backed his Czech counterpart Andrej Babis' s re-election bid on Wednesday (29 September), making a display of the close ties between the two central European leaders who have supported each other in disputes with the EU, write Robert Muller and Jan Lopatka.

The Czech Republic holds a parliamentary election on 8-9 October. Opinion polls put Babis' centrist ANO party ahead of rivals but some show him falling short of partners to form a majority government, which could hand power to a coalition between the main opposition centre-left and centre-right groups.

On the campaign trail, accompanied by Orban, Babis stressed how he and the Hungarian leader had blocked the European Commission's plan to distribute asylum seekers around the bloc under a quota system following Europe's 2015 migration crisis.

"We push for our national interests together" in the EU, Babis said after introducing Orban at a joint news conference in the northern town of Usti nad Laben, where the Czech leader heads the ANO party's ticket.

"We in Hungary are ready to maintain close, friendly, sober cooperation with Andrej Babis's government," said Orban, whose right-wing Fidesz party has governed Hungary since 2010, often clashing with Brussels over immigration and reforms of the media, the judiciary, academic institutions and NGOs.

Babis, a billionaire businessman, has grown increasingly positive about cooperation within the central European Visegrad Group and particularly with Orban in the past few years, despite the EU's concerns over the rule of law in Hungary.

The Czech Republic did not join the majority of EU states this year in signing a letter protesting against Hungarian legislation banning the use of materials seen as promoting homosexuality and gender reassignment at schools.

One of the two main opposition coalitions contesting the Czech election, the Pirate Party/Mayors, attacked Babis over his ties with Orban.

"Viktor Orban shifted Hungary from democracy to autocracy over the past 10 years," its chief Ivan Bartos said on Facebook.

"He liquidates free media, liquidates the opposition, free enterprise, spies on journalists... Such policy is the model for Andrej Babis."