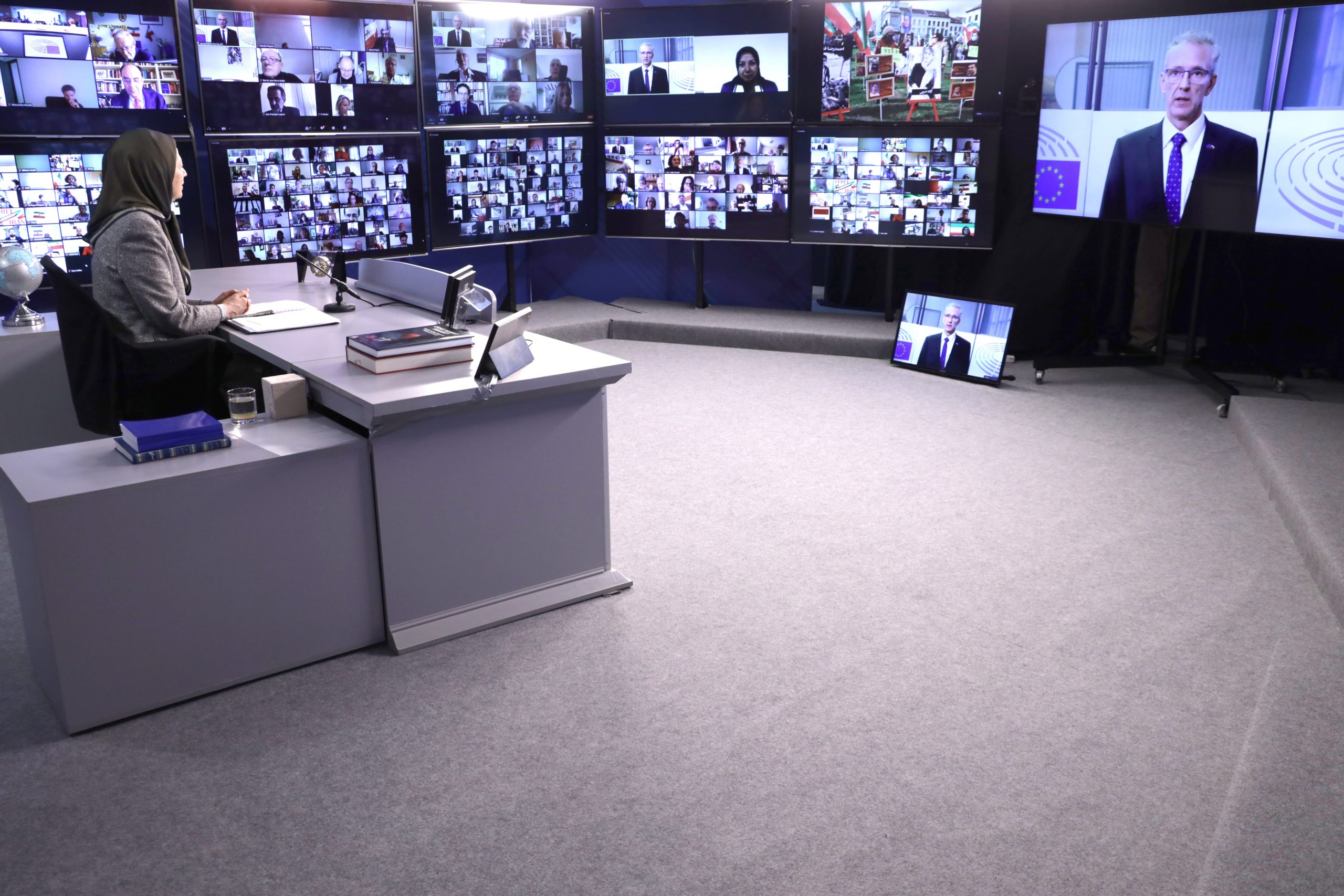 The National Council of Resistance of Iran, a coalition of Iranian pro-democracy groups, has held  a number of online conferences in recent months with the goal of expanding the content of Western policy discussions with respect to the Islamic Republic.

The NCRI’s lead constituent group, the People’s Mojahedin Organization of Iran (PMOI/MEK), has been a major driving force behind nationwide uprisings inside Iran over the past three years, and the conferences regularly point to this trend as an opportunity for the United States and the European Union to help the Iranian people affect large-scale change in their homeland.

The latest such conference took place on Wednesday, October 7, 2020, organized by the Friends of the Free Iran (FOFI) in the European Parliament, and was specifically focused on the “correct policy” and the “political and ethical obligations” for European nations in the face of “ongoing crimes against humanity.” Accordingly, it featured approximately three dozen members of the European Parliament, from different political groups who took a critical view of the current EU policy on Iran. 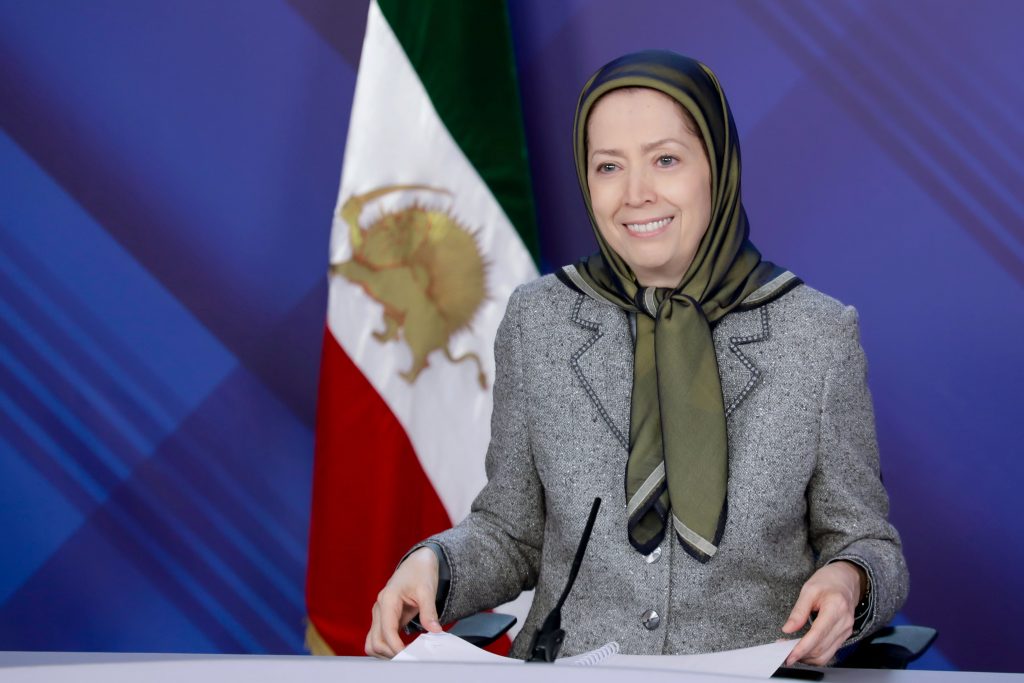 Maryam Rajavi,  the President-elect of the National Council of Resistance of Iran (NCRI)

They warned about the detreating human rights situation in Iran, in particular in view of the new wave of executions against Iranian dissidents and protesters, most notably the hanging of Navid Afkari, the Iranian wrestler who was hanged for taking part in the recent wave of anti-regime protests which have rocked Iran in the past two years. MEPs urged a more robust policy on Iran with a focus on human rights.

A number of participants pointed to the important role the Iranian Resistance has played by referring to the 2018 Free Iran gathering in Paris, when Iranian regime operatives attempted to carry out a terrorist attack on that gathering, which was organized by the NCRI. Though the terror plot was foiled with cooperation from multiple European authorities, it arguably went a long way toward exposing the close overlap between Iran’s terrorist financing and its official foreign policy activities. And in so doing, it also seemed to demonstrate the extent to which the clerical regime views the Resistance movement as a genuine threat to its hold on power.

Maryam Rajavi,  the President-elect of the National Council of Resistance of Iran (NCRI), also addressed the online summit and proposed a three-pronged policy, which included, “Human rights for the people of Iran, comprehensive embargo of the religious dictatorship, and recognition of the Iranian people's Resistance for freedom and democracy,” the adoption of “a binding legislation, to expel the Iranian regime’s agents from the European soil, shut down the regime’s embassies in all EU member states, and designate the IRGC and its proxies in Iraq, Syria, Lebanon, Yemen, and other countries as terrorist groups,” and “an independent international mission must investigate the massacre of 30,000 political prisoners in Iran and the slaughter of more than 1,500 protesters by Khamenei during the November 2019 uprising. The mission must also investigate the condition of prisons and prisoners in Iran, particularly the political prisoners. We demand the release of all political prisoners.

This was certainly a message adopted by a number of participants in Wednesday’s virtual conference, many of whom emphasized the significance of November 27 as the forthcoming start date for a trial in Belgium of the Iranian diplomat Assadollah Assadi. The third counselor at the Iranian embassy in Vienna, Assadi was identified as the mastermind behind the 2018 terror plot, which was to involve the smuggling of high-explosives and a detonator into the NCRI rally, with the intention of killing the coalition’s leader Maryam Rajavi, as well as any supporters in her immediate vicinity.

Had the plot not been foiled, the list of casualties would have almost certainly included high-profile European and/or American dignitaries, possibly including some of the MEPs who also contributed remarks to Wednesday’s conference. Naturally, those participants are taking a personal interest in the Assadi case, but their latest commentary mostly emphasized the importance of holding the Iranian regime as a whole accountable for its long history of terrorism, terrorist financing, and human right violations both at home and abroad.

Assadi’s trial will be the first to formally implicate a professional Iranian diplomat in such terrorist activity, and supporters of the Iranian Resistance are hopeful that it will set the stage for a broader pattern of legal and diplomatic pressures on those who have played a direct role in some of Tehran’s most serious malign activities. For those supporters, and certainly for the Resistance itself, no such pressures are more important than those which might lead to accountability for participation in the regime’s massacre of 30,000 political prisoners in 1988.

That massacre has been the focus of countless action statements by the NCRI and by Western political groups that support the coalition’s pursuit of justice. The 32-year-old crime against humanity began when “death commissions” convened in numerous Iranian prisons with the goal of crushing opposition to the theocratic system. The MEK, in particular, became the focus of interrogation by those death commissions, and after a period of several months its members came to comprise the overwhelming majority of the approximately 30,000 victims.

To this day, no one has been held accountable for these killings. Quite to the contrary, leading perpetrators have been rewarded repeatedly by their own government while being effectively ignored by Tehran’s supposed foreign adversaries. Today, those perpetrators include both the head of the Iranian judiciary and the nation’s Justice Minister, alongside a host of other officials. And those figures now play a significant role in guiding the regime’s strategy for confronting a Resistance movement that it failed to destroy 32 years earlier.

Wednesday’s conference highlighted this situation in order to suggest that it is in Western nations’ own interest to confront Tehran’s current and past crimes, because an enduring sense of impunity prompts hardline officials to make further attempts on the lives of Resistance leaders, risking collateral damage among Western nationals in the process. But conference participants also insisted that even in absence of such clear threats to their own security, Western governments would still have a responsibility to sanction and diplomatically isolate the Iranian regime for violently cracking down on the democratic Resistance.

What’s more, the “correct policy” recommendations that emerged out of the conference included formal recognition of that Resistance movement.

The rule of law, democracy and fundamental rights in Bulgaria

Human rights in Iran under the shadow of COVID-19