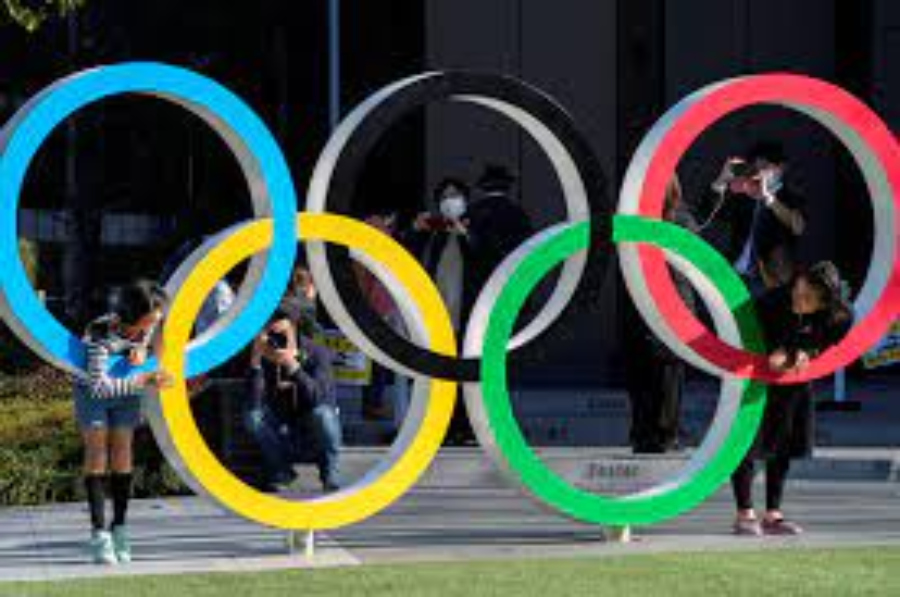 “If it seems impossible to do it any more, then we have to stop, decisively,” Toshihiro Nikai, secretary general of the Liberal Democratic Party, said in comments to broadcaster TBS.

Cancellation is “of course” an option, he said, adding: “If the Olympics were to spread infection, then what are the Olympics for?”

With the country in the midst of a fourth wave of coronavirus infections, doubts over whether Tokyo would be able to host the Summer Games - already an unpopular idea with the public - have resurfaced in recent weeks.

But government and organising officials have consistently insisted the Games would go ahead, and the fact that a ruling party heavyweight made the comment was enough to give his comments top billing on domestic news. “Olympics Cancelled” was trending on Twitter in Japan with more than 45,000 tweets from users as of Thursday afternoon.

“If this person says it, Olympics cancellation looks like a reality,” tweeted @marumaru_clm in reference to Nikai, who is a key backer of Prime Minister Yoshihide Suga and is known for his frank comments.

Nikai later issued a written statement to explain his stance.

“I want the Tokyo Olympics and Paralympics to succeed,” the statement said. “At the same time, to the question of whether we would host the (Games) no matter what, that is not the case. That’s what I meant by my comments.”

The Japanese Olympic Committee (JOC) and the Tokyo government declined to comment, while the Tokyo 2020 organising committee did not immediately respond to a request for comment.

Japan is grappling with rising COVID-19 infections, with new cases in Tokyo jumping to 729 on Thursday, the most since early February. Tokyo, Osaka and several other prefectures entered a quasi-state of emergency this month, asking bars and restaurants to shorten their hours.

Still, the government is pushing ahead with preparations incorporating social distancing measures and other restrictions for the postponed Games, which are set to begin on July 23 and will be held without international spectators. A scaled-back torch relay is already underway.

“We’ll hold (the Games) in a way that’s feasible,” Taro Kono, a popular minister in charge of Japan’s vaccination drive, said on a separate TV programme, according to Kyodo News. “That may be without spectators,” he added.

Akira Koike, an opposition lawmaker with the Japanese Communist Party, reacted to Nikai’s comments on Twitter saying that holding the event was already “impossible” and that a swift decision on cancellation should be made.

Cancelling or postponing the Games would probably not hurt Japan’s economy much but would have a larger effect on Tokyo’s service sector, a senior International Monetary Fund official said on Wednesday. 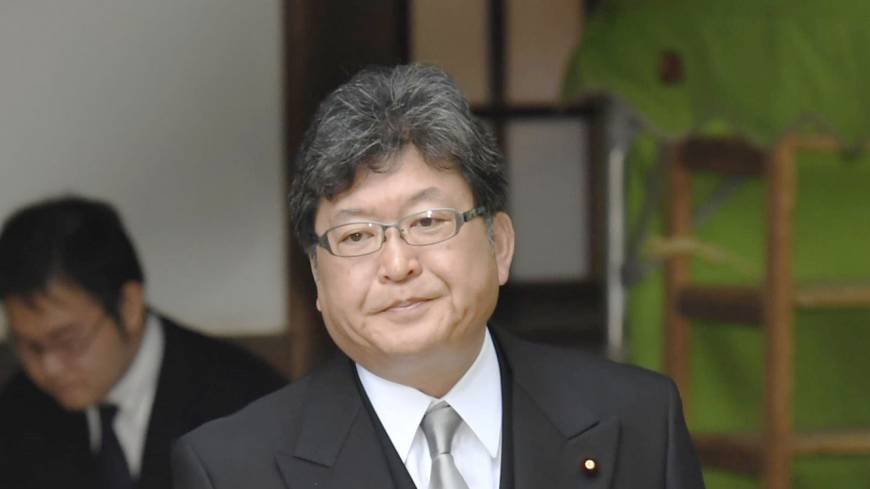 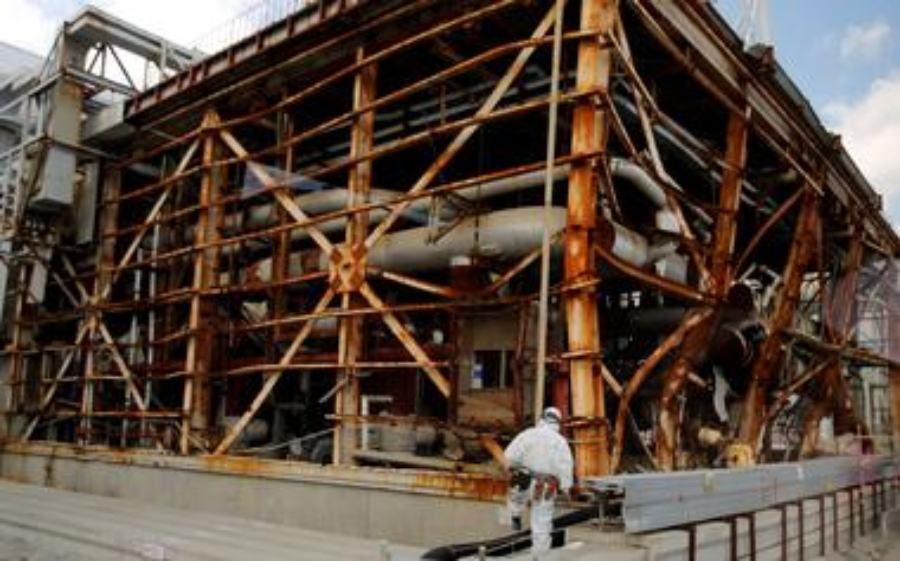 A worker, wearing a protective suit and a mask, is seen from a bus near the No. 3 reactor building at Tokyo Electric Power Co's (TEPCO) tsunami-crippled Fukushima Daiichi nuclear power plant in Okuma town, Fukushima prefecture, Japan February 10, 2016. REUTERS/Toru Hanai

An onslaught of waves sparked by the 9.0-magnitude quake crashed into the northeastern coast, killing nearly 20,000 people and crippling the Fukushima Dai-ichi plant. More than 160,000 residents fled as radiation spewed into the air.

At the time, some - including Prime Minister Naoto Kan - feared Tokyo would need to be evacuated, or worse.

“Fukushima is stamped for the rest of the history of nuclear energy,” said Kiyoshi Kurokawa, head of an investigation that concluded the disaster was “profoundly man-made”.

The government has spent about $300 billion (32.1 trillion yen) to rebuild the tsunami-devastated Tohoku region, but areas around the Fukushima plant remain off-limits, worries about radiation levels linger and many who left have settled elsewhere. Decommissioning of the crippled plant will take decades and billions of dollars.

Japan is again debating the role of nuclear power in its energy mix as the resource-poor country aims to achieve net carbon neutrality by 2050 to fight global warming. But an NHK public TV survey showed 85% of the public worries about nuclear accidents.

Energy policy was left in limbo after Shinzo Abe led his pro-nuclear energy Liberal Democratic Party (LDP) back to power the year after the disaster, ousting the novice Democratic Party of Japan, whose image was tainted by its handling of Fukushima.

“They sort of left things adrift,” said Tobias Harris, senior vice president at consultancy Teneo and author of a book about Abe.

Kurokawa’s commission, appointed by parliament, concluded in 2012 that the Fukushima accident was “the result of collusion between the government, regulators and Tokyo Electric Power Co” and a lack of governance.

Proponents say nuclear power is vital to decarbonization. Critics say cost, safety and the challenge of storing nuclear waste are all reasons to avoid it.

“Those talking about atomic power are people in the ‘nuclear village’, who want to protect their vested interests,” former Prime Minister Kan told a news conference last week.

The mass demonstrations against nuclear power seen in the wake of 3/11 have faded, but distrust lingers.

A February Asahi newspaper survey found that nationwide, 53% are opposed to restarting reactors, compared with 32% in favour. In Fukushima, only 16% backed bringing restarting units.

“Ten years have passed and some people have forgotten. The zeal is gone,” said Yu Uchiyama, a University of Tokyo political science professor. “Restarts are not happening, so people think if they just wait, nuclear power will disappear.”

Only nine of Japan’s 33 remaining commercial reactors have been approved for restarts under post-Fukushima safety standards and only four are operating, compared with 54 before the disaster.

Extending the lifespan of Japan’s 33 existing commercial reactors to 60 years, there would be only 18 in 2050 and none by 2069, said Takeo Kikkawa, an adviser to the government on energy policy. Newer business lobbies are pushing for renewable energy.

“Japan is a resource-poor country so we should not casually abandon the nuclear option,” Kikkawa told a media briefing. “But in reality, the future of nuclear power is bleak.”

Japan’s government is planning to stop overseas spectators coming to the Summer Olympics due to worries they will spread the coronavirus, a report said on Wednesday (3 March), as many Japanese remain opposed to holding the Games during the pandemic, write Chang-Ran Kim and Chris Gallagher.

The final decision would be made this month after talks with the International Olympic Committee (IOC) and other parties, the Mainichi newspaper reported, citing multiple unnamed sources.

The government would continue to consider whether to accept spectators from within Japan, including the number allowed into venues, the Mainichi added.

The report came as the local organising committee was set to host a meeting on Wednesday with officials from the IOC, the International Paralympic Committee, and the Tokyo and national governments.

The question of whether to allow spectators into venues was top of the agenda and organisers have previously said they would make a decision by March.

A Yomiuri newspaper poll showed on Wednesday that, if the Games are to go ahead as scheduled, 91% of people in Japan want spectators kept to a minimum or not allowed at all.

The poll - conducted between Jan. 18 and Feb. 25 - showed 70% of respondents said they were “interested in the Olympics”, but 58% said they did not want them to be held this year because of fears over COVID-19.

The 58% in opposition was, however, about 20 percentage points lower than earlier opinion polls.

The Tokyo Olympic Games were postponed last year because of the pandemic and rescheduled to take place this year from July 23.

A survey by global consultancy Kekst CNC published on Wednesday showed similar rates of majority opposition to the Games going ahead in Japan, at 56%, as well as in Britain and Germany, at 55% and 52% respectively.

In France and Sweden, more people opposed than approved, while in the United States, respondents were split at one-third between those who agreed and disagreed that the Games should go ahead, according to the survey.

While coronavirus infection numbers are low in Japan compared with the United States and many European countries, the greater Tokyo metropolitan area remains in a state of emergency, with restrictions in place for spectator numbers for big sporting and cultural events, as well as closing times for bars and restaurants. The country remains closed to non-resident foreigners.