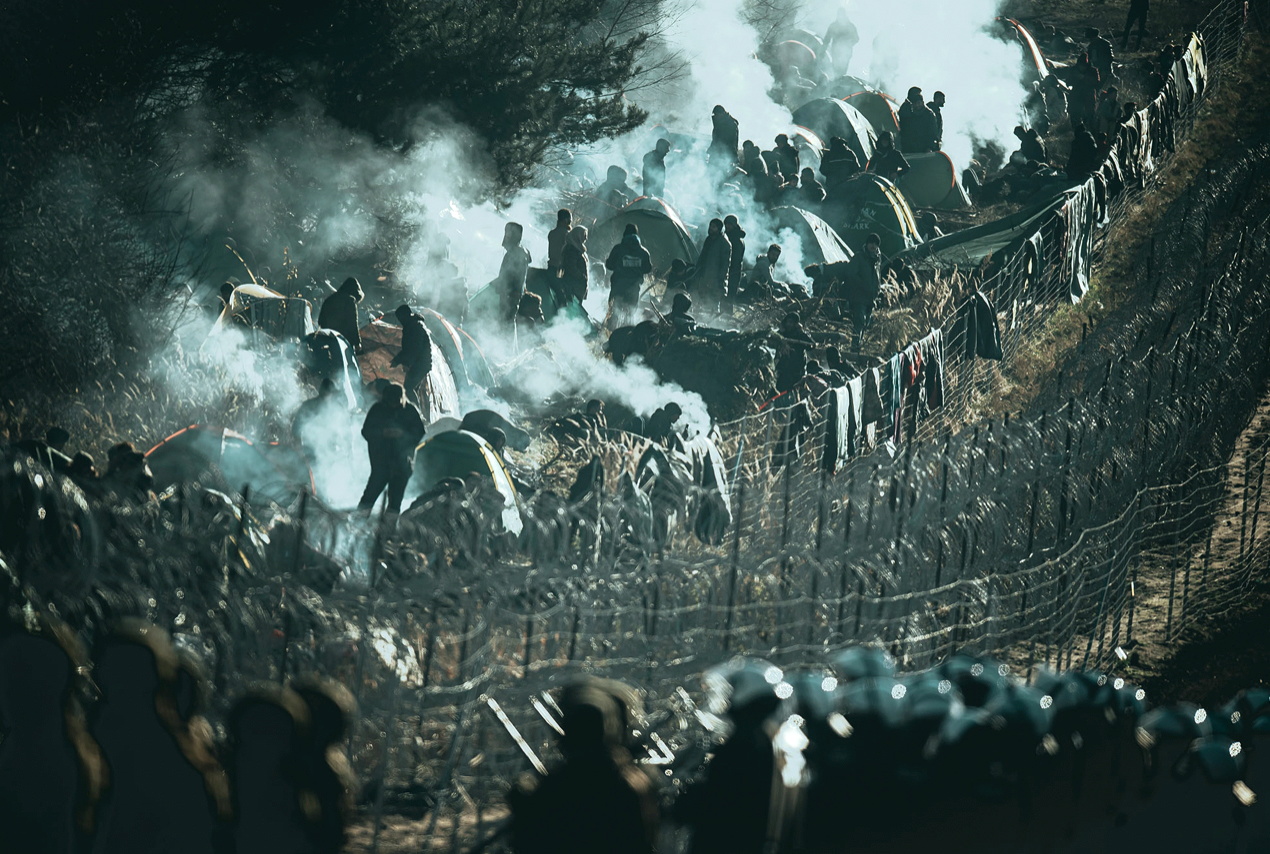 The crisis has led the EU to prepare further sanctions against Belarus, which it accuses of attempting to destabilize the bloc by pushing migrants across the border illegally.

Footage shared by a Polish government spokesperson and the Ministry of Defence showed a further escalation of the crisis at the border, where migrants have assembled in growing numbers on the Belarusian side in the last week.

"Attention, attention, if you don't follow orders, force will be used against you," said a loudspeaker message directed at migrants throwing objects, according to the images that were shown on public broadcaster TVP.

Migrants threw bottles and wooden logs at Polish soldiers, and used sticks to try to break through the fence, the video showed.

The Interior Ministry said a policeman was seriously injured by an object thrown across the border and was in hospital with a suspected fractured skull.

The Polish defence ministry said in a tweet that Belarusian authorities had given migrants sound grenades to throw at Polish soldiers and border guards.

The EU says Belarus is encouraging migrants to cross the border in revenge for earlier sanctions over a crackdown on protests last year against President Alexander Lukashenko's contested re-election.

NATO Secretary-General Jens Stoltenberg said he was deeply concerned about how Belarus was putting the lives of vulnerable migrants at risk.

Belarus, a close Russian ally, said assertions it had fuelled the border crisis were "absurd". Lukashenko had a call with Russian President Vladimir Putin on Tuesday to discuss the crisis, Belarusian news agency BELTA reported.

Polish authorities said they were informed about a phone call on Monday between German Chancellor Angela Merkel and Lukashenko, when they discussed aid to migrants on the Poland-Belarus border.

A still image, taken from a handout video released by the Polish Defence Ministry, shows Polish law enforcement officers, who stand guard and use a water cannon on migrants at Kuznica - Bruzgi checkpoint on the Polish-Belarusian border, Poland, November 16, 2021. MON/Handout via REUTERS .https://platform.twitter.com/embed/Tweet.html?creatorScreenName=Reuters&dnt=false&embedId=twitter-widget-0&features=eyJ0ZndfZXhwZXJpbWVudHNfY29va2llX2V4cGlyYXRpb24iOnsiYnVja2V0IjoxMjA5NjAwLCJ2ZXJzaW9uIjpudWxsfSwidGZ3X2hvcml6b25fdHdlZXRfZW1iZWRfOTU1NSI6eyJidWNrZXQiOiJodGUiLCJ2ZXJzaW9uIjpudWxsfSwidGZ3X3NwYWNlX2NhcmQiOnsiYnVja2V0Ijoib2ZmIiwidmVyc2lvbiI6bnVsbH19&frame=false&hideCard=false&hideThread=false&id=1460332720652009481&lang=en&origin=https%3A%2F%2Fwww.reuters.com%2Fworld%2Feurope%2Fpoland-turns-water-cannon-rock-throwing-migrants-border-2021-11-16%2F&sessionId=1ddc7f38f17162af55b44cf359ded6c059d29de8&siteScreenName=Reuters&theme=light&widgetsVersion=f001879%3A1634581029404&width=550px

Poland's government spokesperson said the government was discussing whether to launch formal consultations on the crisis with NATO allies.

"We are preparing for a pessimistic outcome - that this conflict could stretch out for months," spokesperson Piotr Muller told a news conference.

According to Polish authorities, more than 20,000 members of the police, border guard and army are reinforcing the border where migrants have gathered near the Polish town of Kuznica.

An estimated 4,000 migrants are at the border and many say Belarusian authorities are not allowing them to return to Minsk.

"We have a hybrid war, but an actual war, with arms, is not on our horizon. We are facing an unpredictable enemy," Kaczynski told Polish public radio.

Iraq meanwhile scheduled an evacuation flight from Minsk on Thursday. So far about 150 to 200 Iraqis already in Minsk have registered to fly home.

Other Iraqis at the border have struggled to register. "We are working on this with the Belarusian authorities," said Iraq's consul for Russia and Belarus, Majid al-Kinani.

"The number is fluctuating, because people are stuck on the Belarusian border with Poland or Lithuania and so far they have not been authorised to go back to Minsk by the Belarusian authorities," the consul said.

In Lithuania, authorities said they had detained 47 people who had tried to approach the border.

Belarus: EU allocates €700,000 in humanitarian assistance for vulnerable people stranded at the border